A commission headed by former parliament speaker Thura U Shwe Mann has been reviewing the nation’s laws, but some say more clarity – and consultation – is needed from the government on its legal reform plans.

WHERE and how to begin? They’re the questions those managing a review of Myanmar’s existing and prospective laws are asking, as the scale of the challenge becomes dauntingly clear.

Last week, former parliament speaker Thura U Shwe Mann met the two current Union speakers, U Win Myint and Mahn Win Khaing Than, to discuss how the process should proceed and the role to be played by his commission.

Also present on July 27 were Union ministers and some ministry officials, the attorney general, chief justice and other members of the Supreme Court, and some of the 35 other members of Shwe Mann’s Legal Affairs and Special Issues Commission.

They discussed how legal reform should be undertaken, and which bodies will take the lead in the process, said U Saw Hla Tun, a member of Shwe Mann’s team who also led a parliamentary bill committee from 2011-16.

“So there is a vacuum for drawing laws. In many other countries, there are departments or organisations that take responsibility for this … so we discussed how we should proceed,” he said.

The Attorney General of the Union Law outlines the duties and responsibilities of the office. Its role is defined as that of a provider of legal advice, rather than an agency that drafts legislation. However, the law also states that the office can carry out “other duties assigned by the Union Government or any law”. 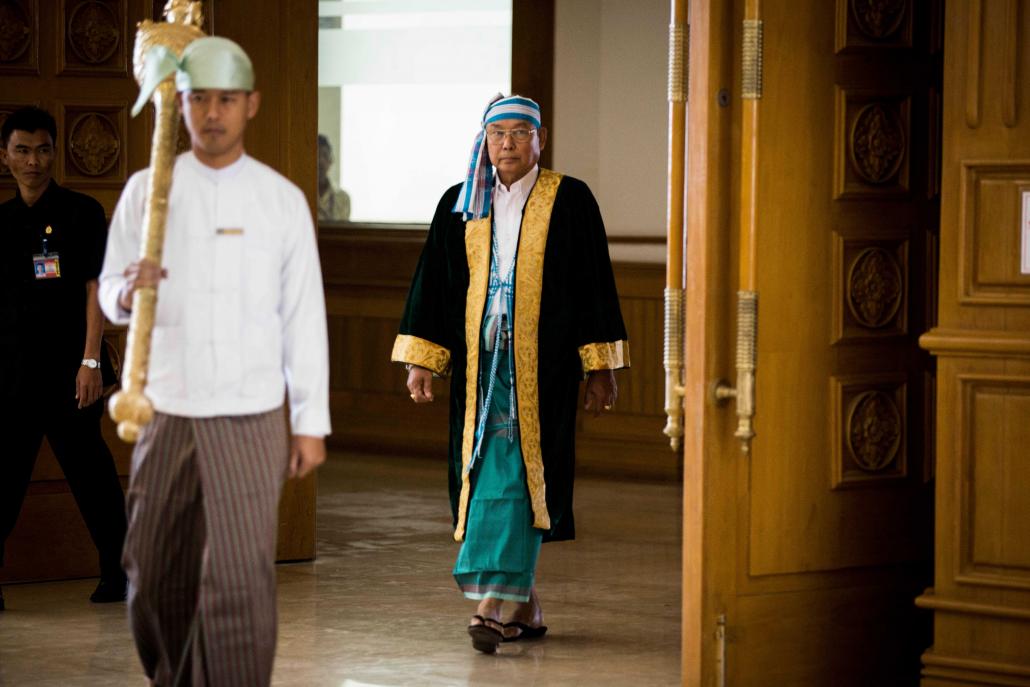 Saw Hla Tun said an informal decision was made on July 27 to form a new department within the parliament to lead the legal reform process. This decision will require parliamentary approval, he said, adding that he expected a decision “in the near future”.

Frontier understands though that the government had previously been considering shifting law-drafting responsibility from the Attorney General’s Office to individual ministries, that would have lawyers working beside bureaucrats on laws related to their ministry’s remit.

Under this system, the legislature’s role would be to vet drafts submitted by the government, while the Attorney General’s Office would support the ministries as necessary.

While the details are being negotiated, Shwe Mann’s commission is continuing with its review of existing laws, Saw Hla Tun said, adding that the body does not have the authority to draft new legislation.

In April, the commission released a list of 142 laws and bills that it recommended be revoked, enacted, amended or rewritten.

The National League for Democracy-backed government has already accepted some of its recommendations, including the repeal of the State Protection Law. Negotiations have also begun over amendments to the Ward or Village Tract Administration Law.

However, the scale of the reform proposed is formidable. At the July 27 meeting, Shwe Mann’s commission said that of Myanmar’s 628 laws, 231 are not enforced or used.

The commission recommended that six laws be revoked immediately, 52 be amended, 48 be replaced by new legislation and 23 be redrafted.

This is an increase from the list of 142 laws released by Shwe Mann’s commission in April, which included seven laws to be revoked, 41 to be amended, 29 to be replaced and 15 to be redrafted.

Of these, five bills are to be discussed during the current session of parliament, which resumed on July 25: the Road Transport Authority Bill; Territorial Sea and Maritime Zones Bill; Government Lotteries Bill; Science, Technology and Innovation Bill; and Elderly Persons Bill. A sixth to be considered is the Civil Servant Law, which was not mentioned by Shwe Mann’s commission.

But more bills keep on coming.

“There are nearly 20 new bills that have not been submitted to parliament yet. We are still discussing them with the ministries concerned,” said U Zaw Myint Pe, another member of Shwe Mann’s commission. “It’s hard to give exact figures for all of the categories of laws – the ones that need to be revoked, amended and so on – because nothing is really confirmed yet.”

Another issue is missing by-laws. Of the 239 laws enacted since 2011, 85 require by-laws to be promulgated so they can come into force. The legislation typically stated that the government must draft the by-laws within 90 days of the law being enacted, but only very rarely was this requirement met.

Of the 85 laws that need by-laws, 45 – more than half – are still waiting. In some cases, the process has taken years. “Some important laws have … not yet come into force because the by-laws have not been enacted,” Saw Hla Tun said.

The process of legal reform being undertaken by the government is relatively opaque. The mandate of Shwe Mann’s commission and other relevant actors has not been specified. The list of 142 laws has not officially been made public, and the criteria for identifying them is not clear.

Consultation has largely been absent, and parliament leaders have recently sought to introduce restrictions on meetings between MPs and civil society, heightening concerns that many stakeholders will be shut out of the process.

“The problem with all of these ‘processes’ in the parliament is that they are shrouded in so much secrecy, without engagement or consultation with civil society,” said Ms Vani Sathisan, international legal adviser with the International Commission of Jurists’ office in Yangon.

“Parliament is reforming laws that affect the very people who gave it such an overwhelming mandate to govern them. So there must be a shift from high-handed decision making to a more open, consultative and respectful one.”

The ICJ has raised its concerns with government agencies, Shwe Mann’s commission and the various bill committees in Nay Pyi Taw, emphasising the need for greater consultation.

Sathisan said some government and parliament officials were willing, even eager, to discuss legal reform – a “hugely positive difference from the previous regime”. Nevertheless, they appear overly concerned with a need to maintain stability, and are reluctant to pass legislation that gives unconditional political rights.

“When the Peaceful Assembly Law was being debated, we had to rush to Nay Pyi Taw over the weekend to sit in the dormitories of some of these parliamentarians and make the case for amendments to be in line with international standards,” she said.

“The Bill Committee chair thanked us for our recommendations, and he emphasised that as legally trained former political prisoners themselves, they do not want to repeat the old regime’s mistakes and violate human rights. He asked though that we understand their predicament of balancing rights protection with wanting to guard against potential threats from troublemakers.”

More recently, the lower house Bill Committee recommended maintaining a provision in the Ward and Village-Tract Administration Law that all overnight guests be registered with local officials, after the upper house committee had removed the clause from an amendment bill.

The registration requirement has often been used by police as a pretext to search houses and detain political activists, in what have been termed “midnight inspections”. Under the lower house Bill Committee’s version, action would be taken against anyone who failed to report overnight guests “on purpose”. How intent would be established is unclear.

Such vague language has been a hallmark of Myanmar legislation since the colonial era, enabling the state to selectively interpret laws to target those it considers to be undesirable elements.

In its meetings with law-drafting bodies, Sathisan said the ICJ had emphasised that the principles of legality requires that laws be clear and precise. Respect for human rights also needed to be paramount when drafting legislation, she said.

“As the new government pushes through legislation and implements plans to strengthen the rule of law and democracy, it is extremely important that compromises are not made in the protection and promotion of human rights.” 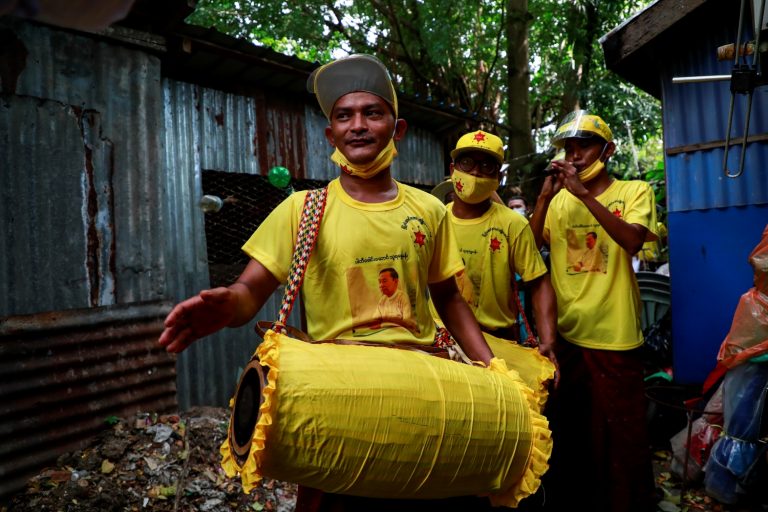 U Shwe Mann’s party has grown rapidly thanks to the wealth and influence of its leaders, but their military backgrounds cast doubt on its claim.
BY Swe Lei Mon 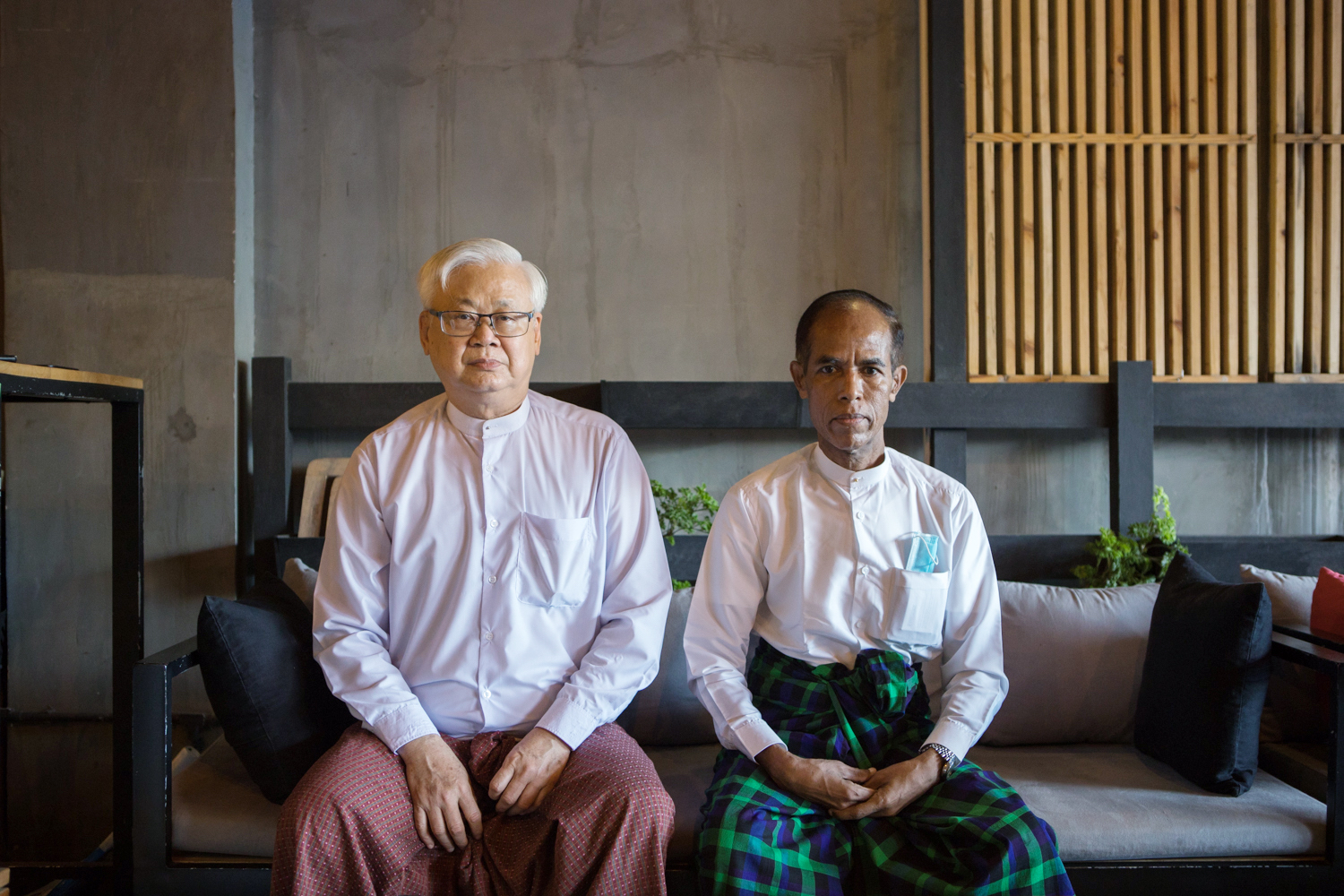 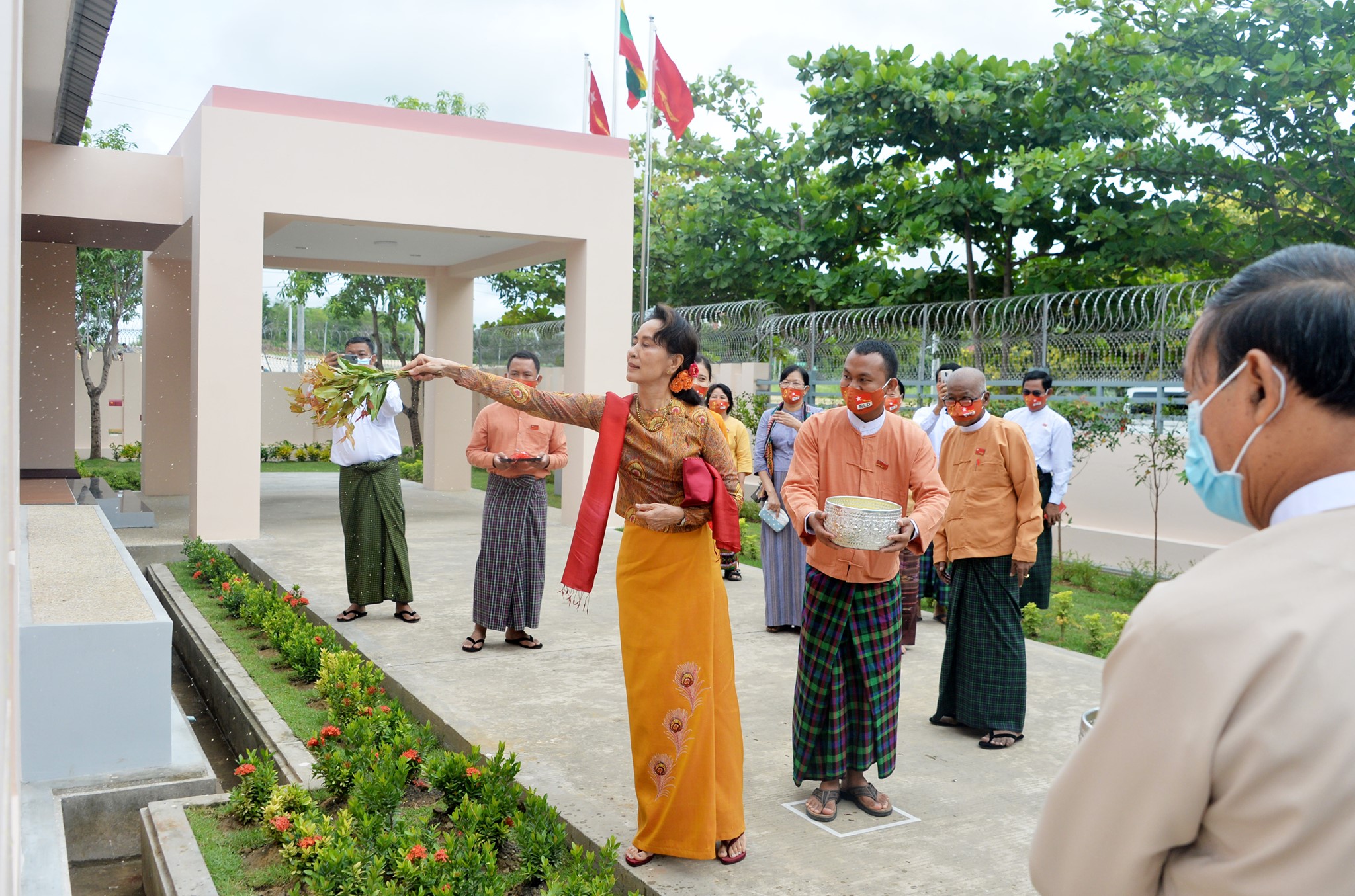 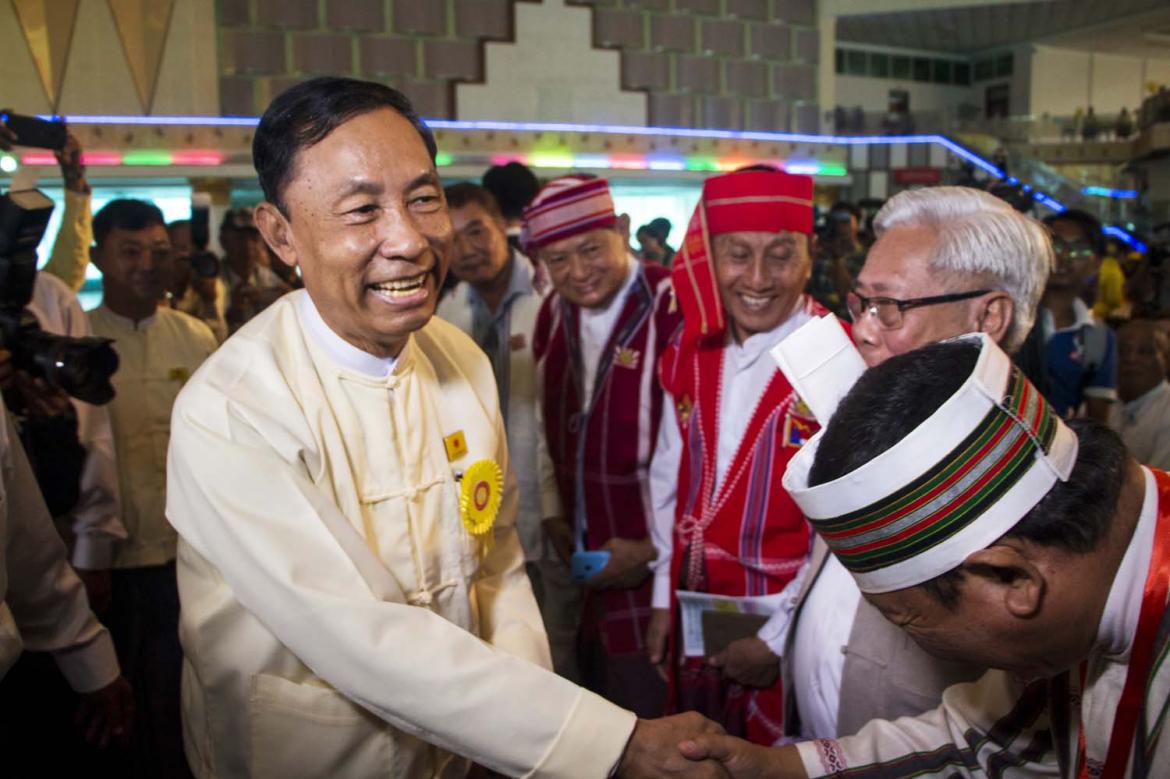