With Daw Aung San Suu Kyi at the helm, can the NLD strike a balance between the various branches of government?

AS MYANMAR’S new democratically elected government finds its footing in the early days of its term, some voices from the capital say the administration hasn’t yet found a way to ensure a healthy separation of powers. The fundamental principle of checks and balances, shared by many democracies the world over, is arguably undermined by the singular power of the new government’s leader, Daw Aung San Suu Kyi, and the entrenched political interests of the armed forces.

Suu Kyi, a Nobel laureate and the daughter of Myanmar’s independence hero, led her National League for Democracy party to a resounding victory in last year’s general election. After dominating the previous administration, the military-backed Union Solidarity and Development Party has been almost entirely flushed out of parliament; the NLD now controls more than 60 percent of the Hluttaw, or Union legislature, with a majority in both houses.

In 1990, the party won a general election with almost identical results, but the then-ruling military junta annulled the outcome and sentenced Suu Kyi, and countless NLD members and supporters, to arrest – Suu Kyi herself was famously detained in her home on the southern edge of Yangon’s Inya Lake.

A full 25 years later, her party finally achieved the near absolute power that the people of Myanmar twice conferred upon it. But while the NLD can easily propose, draft and approve new laws, Suu Kyi is still barred from the presidency and the military retains control of key ministries and veto power over constitutional amendments. 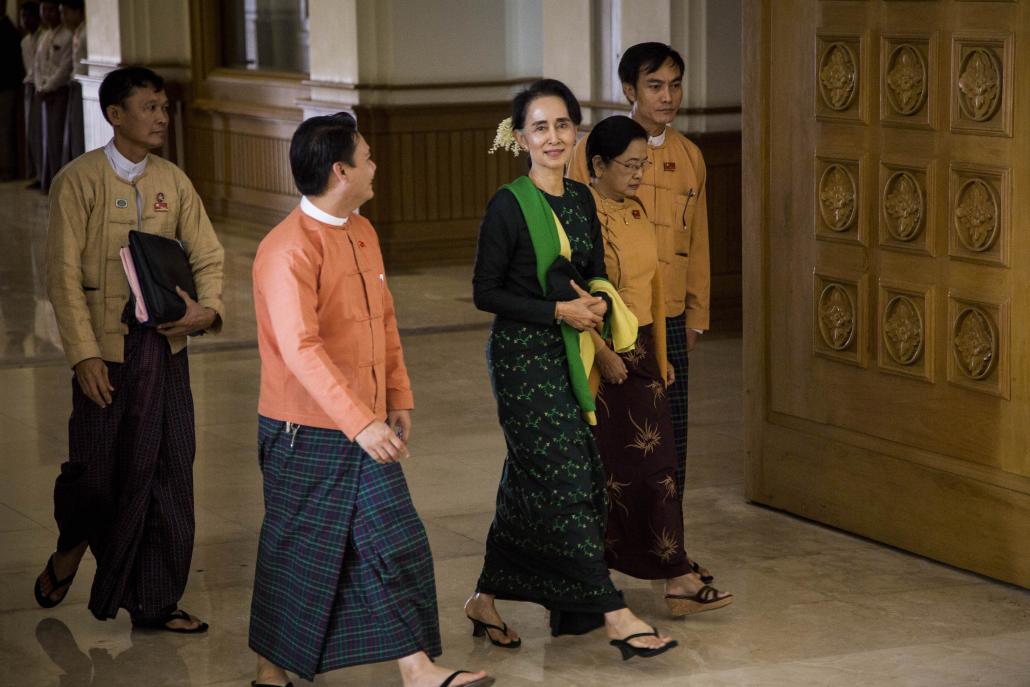 The political pendulum has swung in the NLD’s favour, although the party still does not have complete control. The government has no authority over the armed forces, or Tatmadaw, and cannot change a deeply flawed military-drafted Constitution. By the same token, the military has effectively lost all power over legislative affairs. Hence the power in Myanmar is divided among the military and elected officials; something that is not typical in democratic societies.

Moreover, the powers of the ruling party are not marked by conventional boundaries. Most presidential democracies enshrine three distinct pillars of the state: the legislature, the executive and the judiciary. Myanmar has developed a sort of hybrid parliamentary system, which is headed by the president, but gives the executive branch tremendous control over legislative affairs. The lines are further blurred by a top-down structure lorded over by Suu Kyi, whose influence seems to know no bounds. Barred from the presidency, her parliament’s first order of business was to dutifully elect her choice of chief: long-time friend and ally, U Htin Kyaw, from whom the public has barely heard a word since he ascended to the top job.

Suu Kyi addressed her party’s lawmakers the afternoon before the presidential vote in March, lecturing them on exactly what to do and reminding them of their responsibility to carry out her will. 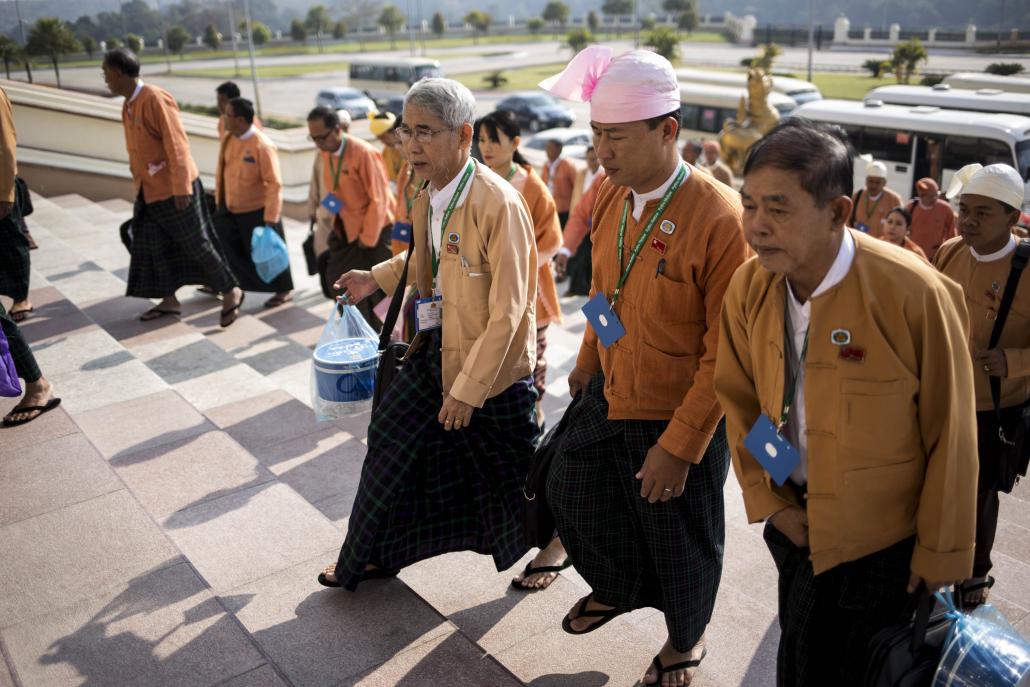 With Suu Kyi’s hand-picked administration installed, the parliament’s next move was to create for her a new position of state counsellor, an executive post she assumed in addition to heading the ministries of foreign affairs and the president’s office. These three roles grant Suu Kyi enormous latitude, allowing her unfettered access to the president, the cabinet, the legislature and foreign dignitaries. The powers afforded to her are so sweeping that the military and USDP contingents of parliament – effectively powerless due to the NLD’s colossal majority – dubbed the role unconstitutional and tried to appeal the move, to no avail.

“Because of Daw Aung San Suu Kyi’s influence, it will be difficult to clearly implement the Constitution, which aims to create checks and balances,” U Ye Htut, who served as information minister and presidential spokesman under the previous Thein Sein government, told Frontier. The charter calls explicitly for three separate branches to be maintained by checks and balances, much like in the United States. The introduction of a state counsellor role, which in practice is similar to a prime minister, appears to some critics to undermine the distinction between the executive and legislative branches that is constitutionally enshrined.

While Suu Kyi’s formal roles are technically executive, she clearly has full control over legislative affairs. She selected former speaker Thura U Shwe Mann to head an influential legal review committee, as well as the speakers of both houses of parliament. She has spearheaded the new parliament’s efforts to amend electoral laws at the Union- and sub-national levels, as well as revisions to the assembly law and other controversial provisions.

Motions introduced by parties outside the NLD have been less successful. In early May, U Wai Sein Aung of the Arakan National Party submitted an urgent proposal to halt conflict in Rakhine State, where a non-state armed group, the Arakan Army, has clashed repeatedly with the Tatmadaw, displacing thousands of civilians. The motion called for an immediate cessation of hostilities and an invitation for the Arakan Army to join national peace talks between the government and other ethnic armed groups. The Arakan Army is not recognised by the government, and along with two other groups has been excluded from the discussions.

“The hluttaw was very worried,” ANP lawmaker Daw Khin Saw Wai, who has twice been elected to represent Rakhine State’s Rathedaung Township in the Lower House, told Frontier. “They were worried that the former government would be blamed [for the conflict] and that the current NLD government will be left with a crisis.” 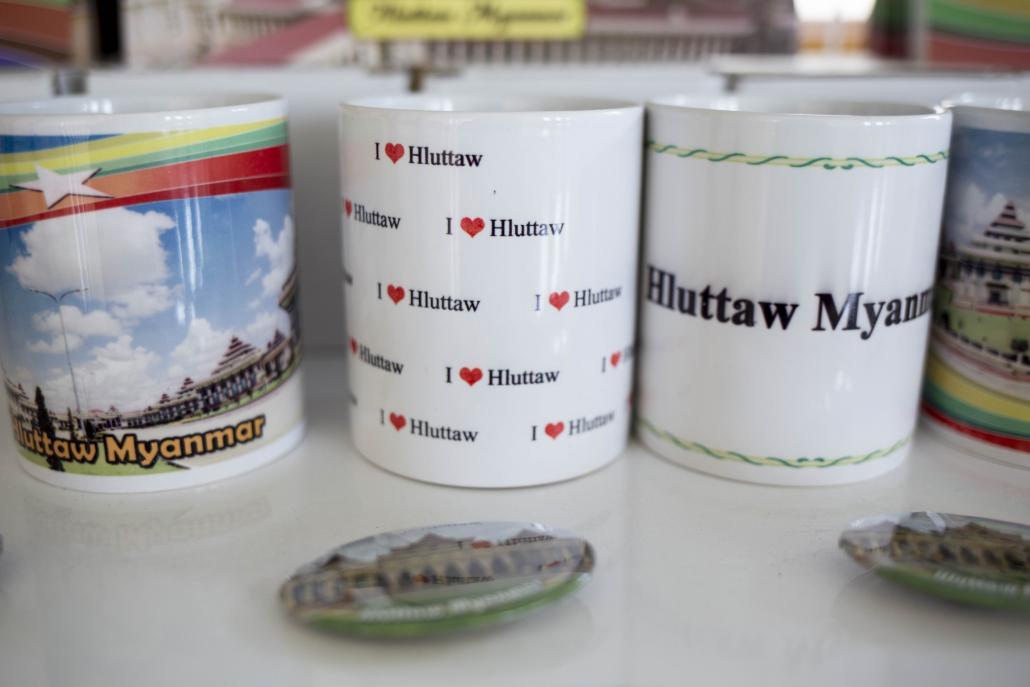 Despite some support from minority parties and a few NLD members, the proposal was almost immediately shot down. A vote brought the issue to the floor, but the NLD-nominated speakers recommended that the proposal be put on record and tabled so as to avoid upset among military lawmakers who opposed some of the motion’s terminology.

Lower House Speaker U Win Myint later told a press conference that the decision was made not in the interest of protecting the government, but because the hluttaw’s primary function was to amend and write laws.

“If the hluttaw cannot carry out amendments to the laws, the administration cannot implement them, so we are focusing on legal amendments,” he said at the June 10 conference. “We just need to carry out [our duties] legally, calmly and rightly.”

The speaker, who was selected by Suu Kyi, staunchly defended her commitment to power-sharing among the branches of government. Win Myint said that while it may appear that she holds disproportionate power, her decisions are made in accordance with the law.

“She abides by the sharing of power—by the legislature, administration and judiciary—she doesn’t intervene in anything and doesn’t influence [their decisions],” Win Myint said. 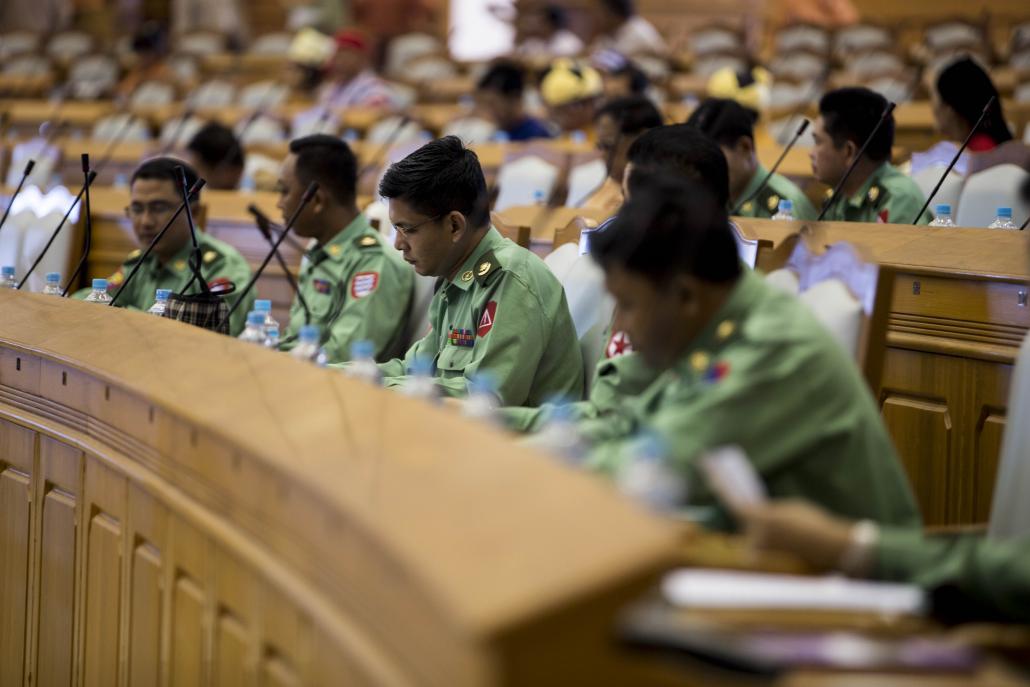 But some lawmakers have been more critical, claiming that the balance was fairer under the previous administration. Under U Thein Sein, a former general and prime minister for the military junta, what was viewed as a rubber-stamp legislature was tempered slightly by then-speaker Shwe Mann. Despite his military background—he was also a former general and third-in-command under the junta—Shwe Mann was a known sympathiser of Suu Kyi, and under his leadership the legislature approved a number of provisions that displeased the military or the president. The current speakers have shown no such independence or willingness to contravene the ruling party’s agenda.

Nonetheless, some checks and balances are in place, such as committees meant as liaisons between the cabinet and the legislature. Some parliamentary observers claim, however, that they are not always fulfilling their function because participation in committees is not compulsory, and because their meetings are often held behind closed doors without adequate transparency.

“Because there is no provision in relation to hearings, ministers might not come [to committee meetings],” said U Htin Kyaw Aye, the research director at parliamentary watchdog Open Myanmar Initiative. The group reports regularly on parliament’s activities and performances, and has been observing the legislature since it was established five years ago. Htin Kyaw Aye says it is “too early to tell” whether the branches of the new government are operating in a balanced manner.

U Thein Tun, lower house representative in Ayeyarwady Region’s Kyaunggon Township for the USDP, argued that because the scales are tipped so heavily in favour of the NLD, the legislature, which maintains at least some diverse opinion, should be granted some extra leeway.

“Checks and balances are good if they are between equal powers,” he said. “It would be better if the hluttaws were more powerful.”