Keep on trucking: transport sector remains on the move despite COVID-19

Business is down and a reduced fleet of trucks is supplying factories and delivering goods, but the need to comply with curfews across Myanmar is causing burdensome delays.

Movement restrictions imposed to prevent the spread of COVID-19 have left many people confined to their homes. Offices have instituted work from home policies, while factories and workshops were forced to close in late April pending government inspections. Some businesses have shuttered altogether, either permanently or until COVID-19 prevention rules are rolled back.

But while COVID-19 has brought parts of the economy to a halt, the transport and logistics sectors have to keep moving. Although demand for transport has dropped because of the pandemic, there are still exports to send to port and imports to deliver to factories and warehouses, shops around the country in need of restocking and markets that require fresh produce.

For truck drivers like U Kyaw Zeya, the work continues ­– although it has changed a bit, in response to prevention rules and other measures to keep drivers safe.

“I still do the same number of trips each day,” the Yangon-based container driver told Frontier at about 7pm on April 24, as he settled in for a night’s sleep in his truck on Strand Road near Botahtaung jetty. Earlier in the day Kyaw Zeya had been moving products such as zinc roofing materials and refrigerators from the Botahtaung docks on the Yangon River to an industrial zone in East Dagon Township, on the northeastern outskirts of the city.

“The only difference [in Yangon] is working in the daytime [because of the nighttime curfew] and the healthcare precautions introduced at factories,” said Kyaw Zeya, who is in his 50s. “I have to wear a face mask when I do deliveries.”

He said he wasn’t worried about potentially being exposed to COVID-19 while working. “To be honest, I’m just glad I still have a job. But I follow all the rules and health precautions at the ports and factories.” 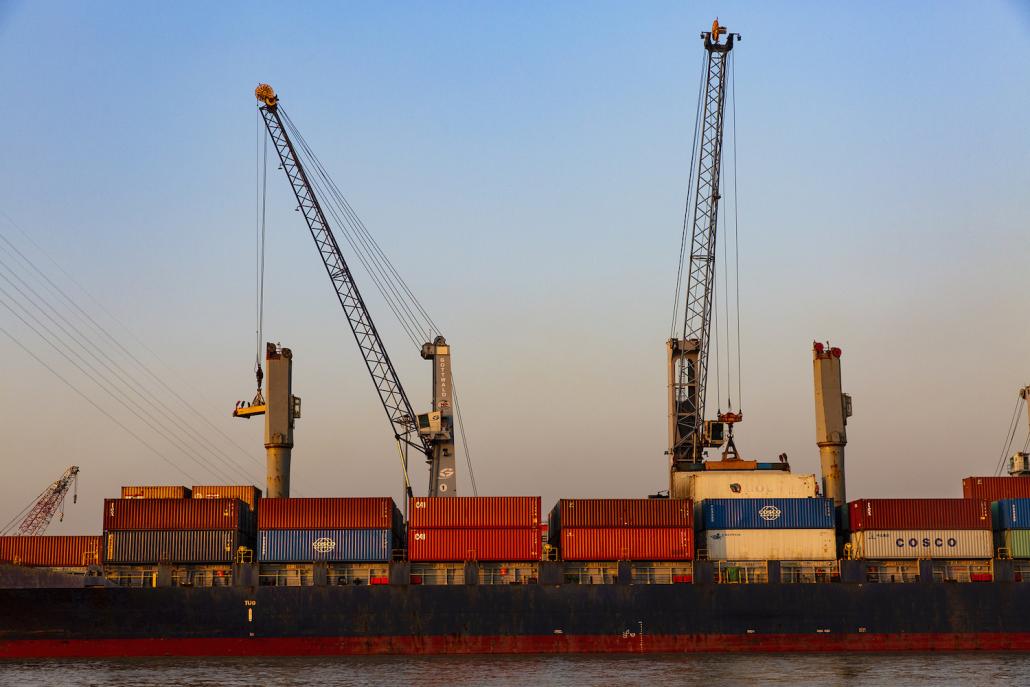 The impact of COVID-19 on the economy, particularly garment exports, has led to a sharp drop in work for trucking businesses. The Myanmar Container Trucks Association says that only 30 percent of members’ trucks are on the roads. (Hkun Lat | Frontier)

But many other drivers and truck owners have seen work dry up due to the economic impacts of COVID-19. The country’s US$5 billion garment industry provided a growing source of business in recent years, with raw materials moving between the port and the factories and finished goods going the other way, destined largely for the lucrative European market. But with many orders for garments cancelled, and some factories having closed altogether, there is much less need for trucking.

Of the 2,500 trucks under the Myanmar Container Trucks Association, only about 30 percent are on the road at the moment, says secretary U Soe Naing. Most of its members are small businesses that operate around five or six trucks.

“Ships are still coming to the ports and unloading goods and still picking up exports, but many of the goods they are delivering are just sitting around at the ports. This is because many factories are closed, or there are not enough workers at the factories or warehouses to accept deliveries,” Soe Naing said.

For those drivers who are working, Soe Naing said the MCTA has instructed them on the importance of social distancing and wearing face masks. “Raising awareness and introducing precautionary measures is important because the business needs to continue operating,” he said.

Exports have been affected in other ways, too. U Ibrahim, a trader who exports turmeric between March and July, said there had been delays arranging shipments to Singapore and other countries that are under lockdown.

The 10-day Thingyan holiday ending on April 19, during which government offices were closed, had also caused delays in issuing export documents, he said.

“Paperwork has been a problem, but the transport side of things is working well.”

To ease the cost on businesses and to help keep the transport system running, the Myanma Port Authority on April 6 reduced charges for demurrage, imposed when a ship is not loaded or unloaded within an agreed time, as well as storage fees.

Mr Thorstein Svendsen, the CEO of Nordic Group, which operates 11 warehouses and 29 trucks, said logistics companies should use the downtime to improve their efficiency and systems, and to develop new business opportunities.

“The logistics sector needs to look at itself and use this as an opportunity to change,” he said. “One of the big problems is that there’s a vast number of trucks that should never have been on the road. Hopefully something can be done to upgrade the fleet and improve standards. Normally you make more money driving a new truck than an old one, and it will be safer for everyone.”

Nordic has actually seen an increase in business in recent weeks, he said, expanding its staff by 20 percent. This is largely because it trucks between Myanmar and Thailand through the Myawaddy crossing, which has not only remained open for freight through the COVID-19 pandemic but also seen an increase in traffic because of temporary closures at other border gates. Nordic is also pursuing new opportunities in the food sector, including wholesale deliveries, packaging and short-term storage, as well as the possibility of setting up regional hubs to get closer to local markets.

“Some businesses are doing well at the moment, like [those doing] last-mile food deliveries,” Svendsen said. “That seems like it is here to stay now.” Truck driver U Kyaw Zeya (left) sits on the front of his vehicle near Botahtaung jetty on April 24. Since the introduction of a nighttime curfew on April 18, drivers have switched to working in the daytime. (Hkun Lat | Frontier)

One big change to trucking operations as a result of COVID-19 has been a shift in working hours.

Previously trucks were only permitted to use roads in Yangon Region between 8pm and 6am to relieve traffic congestion, but these hours have been almost completely flipped, from 7am to 8pm, as a result of a 10pm to 4am curfew the regional government imposed on April 18. With few cars on the roads, there’s little need to worry about traffic jams now.

But many other parts of the country have introduced similar curfews, which has made long-distance transport in the time of the coronavirus much more complicated, time consuming and expensive. Svendsen from Nordic Group said a trip from the southern port town of Myeik in Tanintharyi Region that previously took around 20 hours now takes up to 48 because of the need to comply with curfews.

Curfews have also meant fewer long-distance trips for many drivers. Kyaw Zeya said he previously travelled to Mandalay or the Mon State capital Mawlamyine once or twice a month but has had no long-distance trips since March, when the government began introducing COVID-19 prevention measures.

“The trucks that deliver freight throughout the country have to stop during curfews and that can lead to delays,” he said.

U Soe Naing from the Myanmar Container Trucks Association agreed that “the curfews are delaying the arrival of deliveries” but said they are “better than not allowing travel at all”.

But Svendsen said he could not understand why long-haul trucks had been required to comply with curfews. “This is not happening in any of the neighbouring countries,” he said. “A truck driver and assistant driving quietly through the night bringing food and supplies to all corners of Myanmar do not pose a risk of any kind, and many voices are pushing for this ban to be lifted as soon as possible.

“What you get now is that because they can’t drive at night, the drivers are actually hanging out together at truck stops. That’s exactly what you don’t want if you’re trying to stop the spread of COVID-19.”

He said there were also problems with enforcement, as some companies were managing to get around the curfew rules and deliver as normal. “Many companies are ignoring the curfew and are still driving, getting from A to B on time and on cost,” Svendsen said. “This makes it hard for companies that comply with the rules to stay competitive or even get any work.”

U Maung Maung Lwin, 55, who delivers rice and organic compost to Hpa-an, Mawlamyine and Myawaddy in a 10-wheel truck, said that in some areas outside Yangon officials were willing to let trucks drive at night.

“It’s about timing – sometimes I can’t leave Yangon early enough and I get stuck in Bago for a night,” he said. “But if I can get into Mon State before 10pm, they usually let the cargo trucks pass through, with mutual understanding.” – Additional reporting by Thomas Kean