A recent upsurge in conflict in Kachin State has sparked anti-war protests in major cities, as youth activists band together with support from more experienced community and civil society leaders.

IN LATE APRIL, a crowd began to form at the Manau Park in Myitkyina, the Kachin State capital. The demonstrators – several thousand, according to media reports – were calling on the government to rescue those trapped by recent fighting between the Tatmadaw and the Kachin Independence Army.

The latest spike in fighting started in April around the amber mining township of Tanai, but has since spread to different parts of the state. An estimated 8,000 people have been displaced across Kachin and northern Shan states since April, said Mr Pierre Person, spokesperson for the UN’s Office for the Coordination of Humanitarian Affairs. Many are trapped in the conflict zone without access to humanitarian aid, but rights groups have been unable to confirm exactly how many are stuck and unable to flee to safety.

The protesters have called on the government to free the IDPs, to provide them with humanitarian assistance and to establish new IDP camps in affected areas.

Much of the public anger has been directed at the National League of Democracy, who they accuse of doing little to stand up for the Kachin people since the party came to office two years ago and promised to make the peace process a priority. The leaders of the protest have also called for Dr Hket Awng, the NLD-appointed chief minister of Kachin State, to resign.

Tired of waiting for the government to take action, young Kachin activists have organised themselves into the “Kachin Youth Movement” and are being supported by more experienced community and civil society leaders. 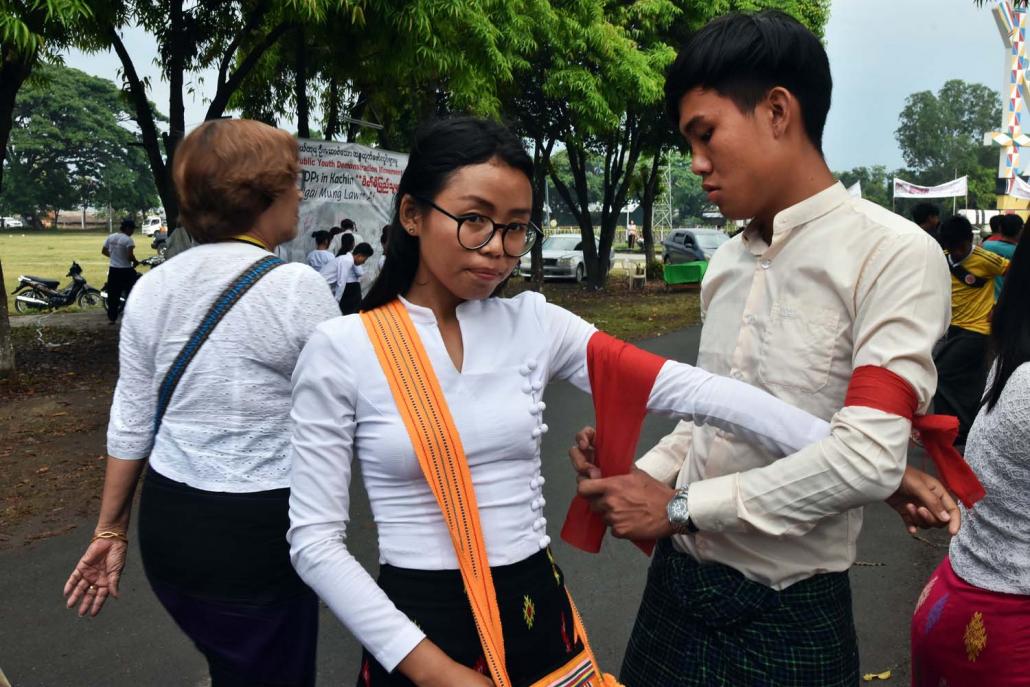 Supporters of the All Kachin Student Youth Union gather at the Manau Park in Myitkyina for a peace vigil calling on the government to protect civilians caught in the conflict zone in Kachin State. (Steve Tickner | Frontier)

A few days after the protests started, on the evening of May 3, protest leaders met with Hket Awng to lay out their demands. After several hours of talks, they left without a concrete agreement.

The protests in Manau Park have ended peacefully for the time being, but leaders of the movement have said they intend to keep pushing for their demands.

The military is also fighting back. On May 8, Lieutenant Colonel Myo Min Oo from the Tatmadaw’s Northern Command filed criminal defamation complaints against three of the event’s organisers, Lum Zawng, Nang Pu and Zau Jat for alleged statements made on April 30 and May 1. They each face a potential two-year prison sentence and/or a fine if they are found guilty.

Anti-war protests are not new in Kachin State, but this time the movement has attracted considerable momentum, with similar demonstrations held in Yangon and Mandalay in solidarity. Protest leaders told Frontier that they are still planning their next move, and some are speculating that this could represent a new generation of anti-war youth leaders in Myanmar. 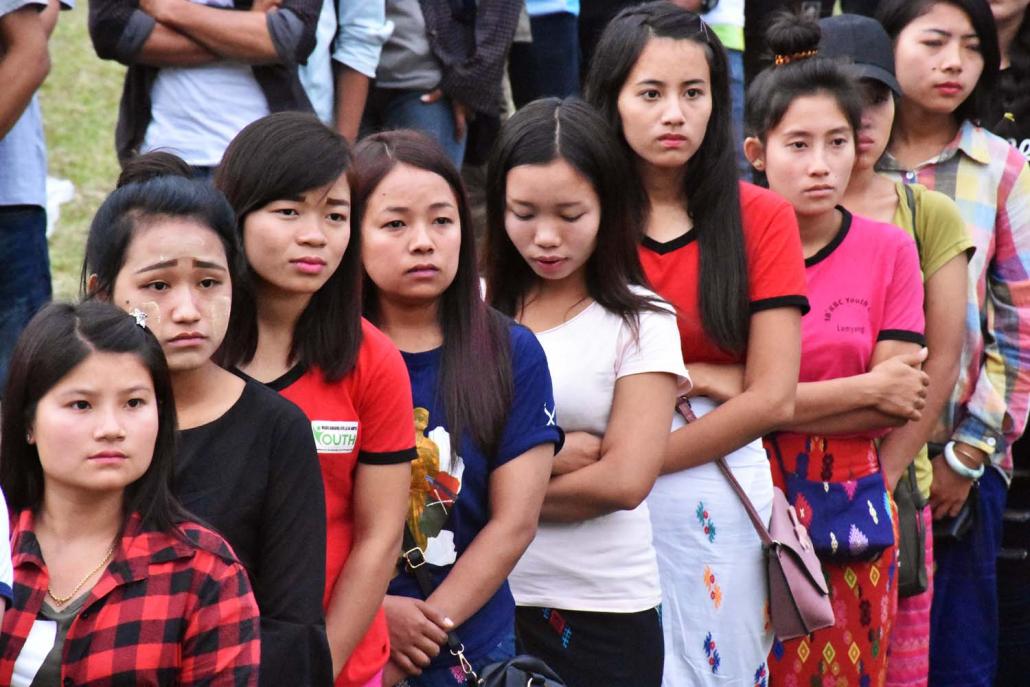 “We have had a lot of support from people in Myanmar, and around the world. It’s very encouraging,” said Seng Hkum, who has emerged as one of the movement’s leaders in Myitkyina.

He told Frontier by phone May 18 that since the protests stopped in Myitkyina the group has been watching how the government responds.

“We are sticking to our demands, that the IDPs need to be released,” he said. “We are young civilians and we desire peace. We encourage the government and the military to end armed conflict.”

Lum Zawng is another leader of the KYM. Speaking to Frontier at the protest site in Myitkyina on May 5, he called the demonstrations a “democratic movement”.

“We have a lot of media attention and many supporters. Civilians and civic organisations are actively supporting our movement, which is trying to free the IDPs,” he said.

“It is a long process, but we don’t want to spend a long time here [in Manau Park]. This is why we are pushing directly to the [Myanmar] army commander-in-chief, and discussing different approaches and strategies,” he said. 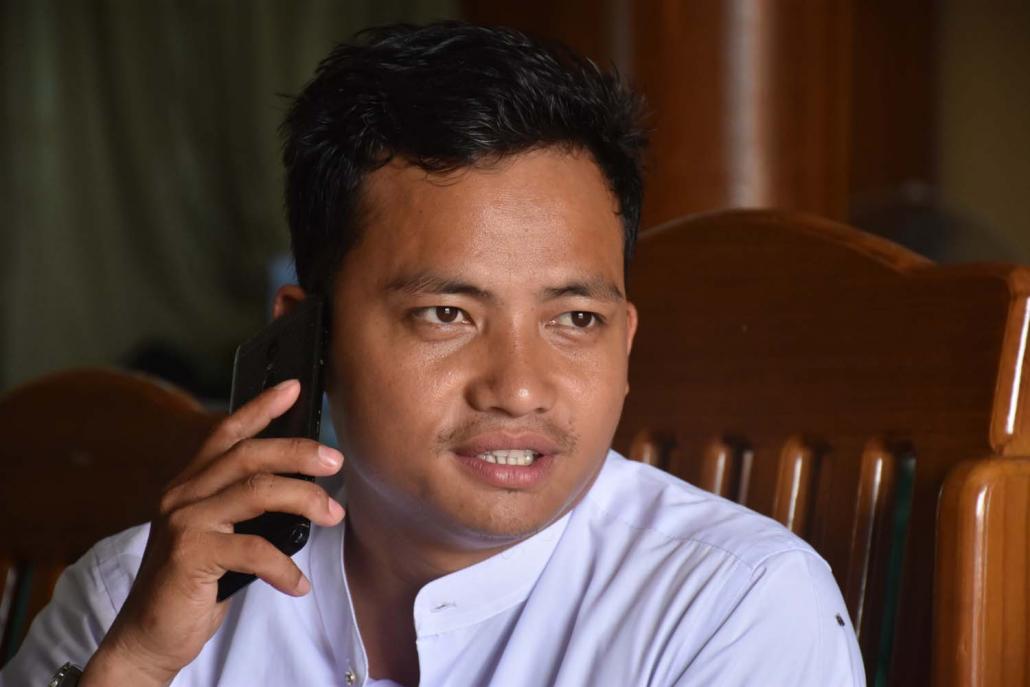 Many of the Kachin heavily involved in civil society became politically active after a 17-year ceasefire broke down in June 2011, said Stella Naw, a Kachin activist and analyst.

“It physically hurt when the war re-started, even though I wasn’t living in the conflict zone,” she said. “I grew up in Myitkyina, during a ceasefire period, so I didn’t really know war, [but] that’s changed. Innocent civilians were targeted, and that’s why we became angry.”

Fighting between the KIA and the Myanmar Army dates back to 1961 and has been described as one of the longest wars in the world. June 9 will mark seven years since a 17-year ceasefire broke down; more than 100,000 people have been displaced as a result of the conflict.

Since April, clashes between the Tatmadaw and the KIA have been reported in several Kachin townships, including Hpakant, Tanai, Injangyan, Momauk, Myitkyina and Waingmaw. Fighting has also occurred close to the KIA headquarters at Laiza.

Ms Yanghee Lee, the special rapporteur on the situation of human rights in Myanmar, said the recent increase in conflict was “wholly unacceptable, and must stop immediately”.

“Innocent civilians are being killed and injured, and hundreds of families are now fleeing for their lives. Civilians must never be subjected to violence during the course of conflict,” she said in a May 2 statement. 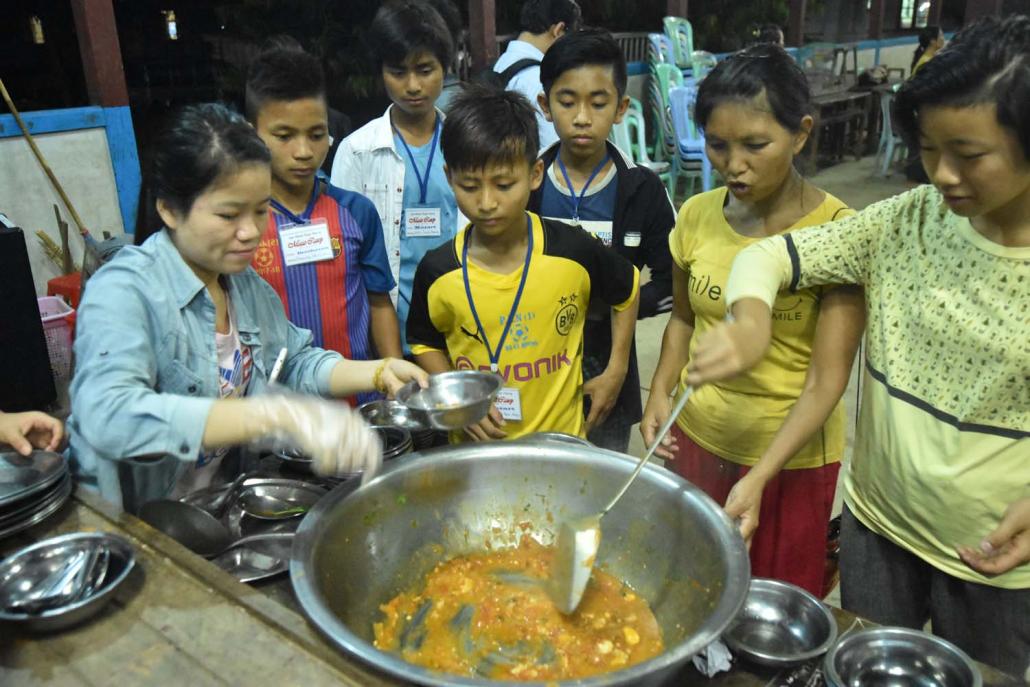 A May 15 statement by the Kachin Women’s Association Thailand accused the Tatmadaw of committing war crimes in three townships: Hpakant, Tanai and Injangyang. The statement said soldiers had blocked IDPs from escaping and used them as human shields and minesweepers. The Tatmadaw had also indiscriminately shelled and bombed civilian areas, while its soldiers had looted and destroyed property, the group said.

Asked about the accusations, government spokesperson U Zaw Htay directed questions to the military. A military spokesperson could not be reached for comment.

One Kachin man from Injangyan Township who sought refuge in a church on the outskirts of Myitkyina told Frontier in mid-May he fled after Tatmadaw soldiers came to his village of Bum Nan Yang.

The rest of his family also fled the fighting but he hadn’t been able to contact them for almost a week.

“I don’t know what to do. We have to stay here. We can’t go home because the Tatmadaw is there,” said the man. “The conflict is between armed groups, we civilians are not holding guns. Why torture and kill us? I would like to request the international community to come and stop the fighting.”

A 96-year-old IDP, located at another camp on the outskirts of Myitkyina, told Frontier by telephone that she had fled fighting in her home state many times before.

“I ran into the forest in the past. But this time I ran here with my family to avoid the fighting. I heard the crack of gunfire near my village, and also the sound of gunfire from a plane,” she said.

The momentum of the Kachin Youth Movement has spread, and anti-war protests have also been held in other parts of the country, including Yangon and Mandalay.

On May 12, hundreds of demonstrators held a protest in Yangon calling for an end to the violence in Kachin State, as well as other parts of the country. The organisers planned to march from Tarmwe to the city’s downtown area but were informed shortly before the protest that authorities had denied them permission to hold the event. 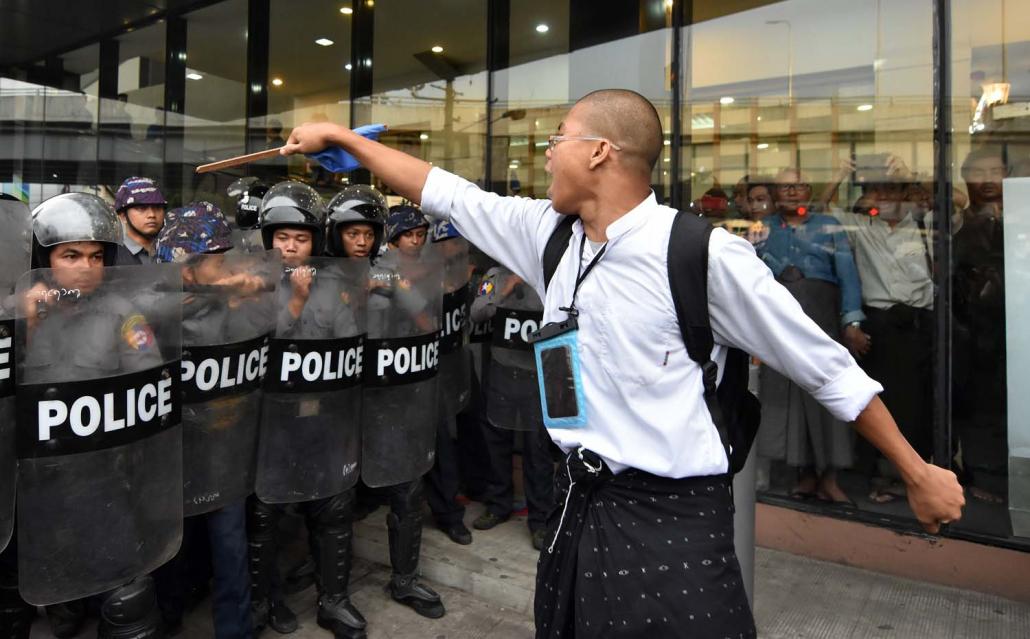 A peace rally in Yangon on May 12 turned violent when police moved in on protesters together with civilian vigilantes. (Steve Tickner | Frontier)

The protest turned physical when several protestors attempted to pass a line of police armed with riot shields, and at least eight of the protesters were arrested. Pictures shared on social media appeared to show plain-clothed vigilantes helping police disperse the crowds.

Ko Moe Thway, who was involved in the Yangon protests, told Frontier that the organisers wanted to show solidarity with the Kachin people and to see peace in Myanmar.

“We were very surprised by the scale of the crackdown. We have never seen [the police] use water hoses before. We didn’t expect it to escalate,” he said.

Moe Thway said that the organisers had followed the correct procedures by informing authorities of their plans for the protest.

“I am not sure about the next protests. That crackdown made a lot of people angry, but it also made people scared,” he said.

A spokesperson for the European Union delegation in Myanmar, which is leading a five-year programme training the Myanmar Police Force, said they could not confirm that the MPF had hired vigilantes to work alongside police officers during demonstrations. 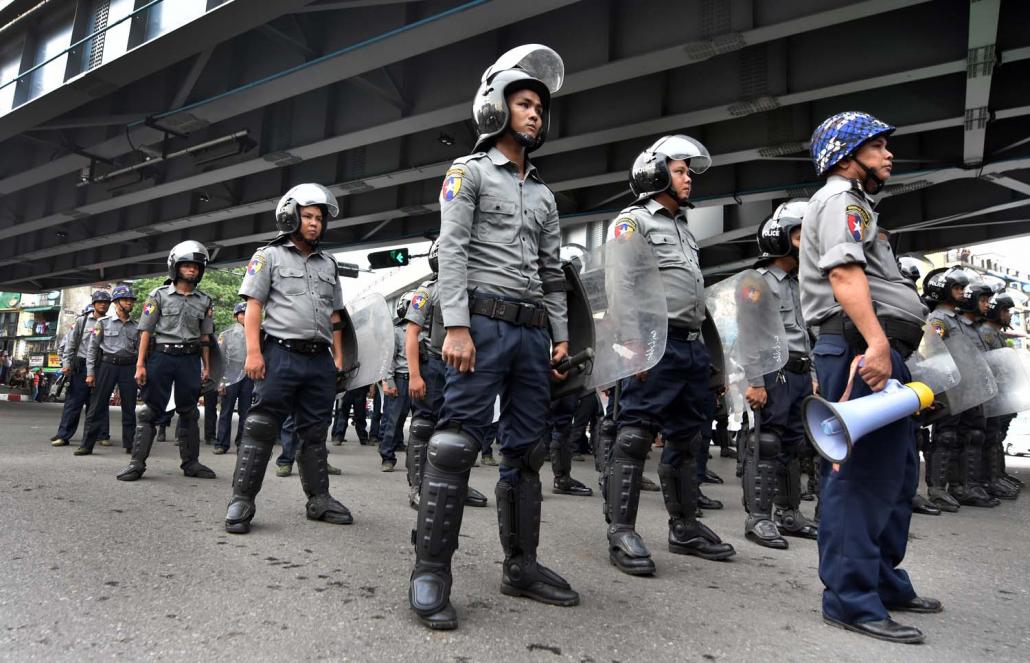 “The recent incidents during the peace protests have shown once more that more needs to be done to modernise the police force, strengthen their operational capacities and establish a trustful relationship with the communities,” the spokesperson said by email.

“We acknowledge that structural changes do need time, and – considering the depth of reform needed – we have only just started. The EU therefore remains fully committed to supporting police reform and to continuing our cooperation with the Myanmar government and the police force on that matter.”

Stella Naw, the Kachin activist, said that many Kachin people believe strongly in the cause of the Kachin Independence Organisation, the political wing of the KIA, to fight for the rights of Kachin people.

“The Kachin struggle will continue until we receive political equality. It might not always be an armed conflict, but it will continue in some form. So the youth are important,” she said.

“Kachin people, the youth, they are angry and upset and fed up with all this oppression. [The youth movement] will keep coming in different forms,” she said. “We don’t know where it will go, but it will keep coming.”