MYITKYINA — Kachin youth activists Pau Lu and Seng Nu Pan were sentenced to 15 days’ imprisonment by the Myitkyina Township Court in the Kachin State capital on September 2 for their role in organising a street performance to mark the eighth anniversary of the resumption of fighting in Kachin State.

The jail term was imposed after the pair declined the option of paying a K30,000 fine.

A photo of Pau Lu handing the judge a broken scale after the verdict was handed down was widely shared on Facebook.

The sentencing came after nearly three months of weekly court appearances by the pair, who were charged on June 10 by Myitkyina Township police under section 19 of the Peaceful Assembly and Peaceful Procession Law over what police claimed was an unauthorised protest the previous day.

The event in question was a street theatre performance, which included a re-enactment of the aerial bombing of Kachin villages by the Tatmadaw. The performance was staged by youth displaced by conflict after the collapse in 2011 of a ceasefire signed by the Tatmadaw and the Kachin Independence Army in 1994.

Pau Lu and Seng Nu Pan had informed the authorities of the plan to hold the anniversary event more than 48 hours in advance, as required by law, but police arrived at the venue, Sein Mya Ayeyar Park in Myitkyina’s Yuzana Quarter, on June 9 and said the notification was incomplete because it did not mention the drama performance. After a heated argument, the event was relocated to People’s Square in downtown Myitkyina.

Speaking outside the court after the verdict was delivered, Seng Nu Pan said Kachin youth would continue to campaign for peace “and fight against wrongdoing and injustice”.

“We tried to express the burden of this war on the displaced through our performance … for us, this is not fiction. We voiced our truth and we voiced our grievances,” she said, adding that their arrest “shows the nature of democracy and the absence of our government in maintaining this democracy.” 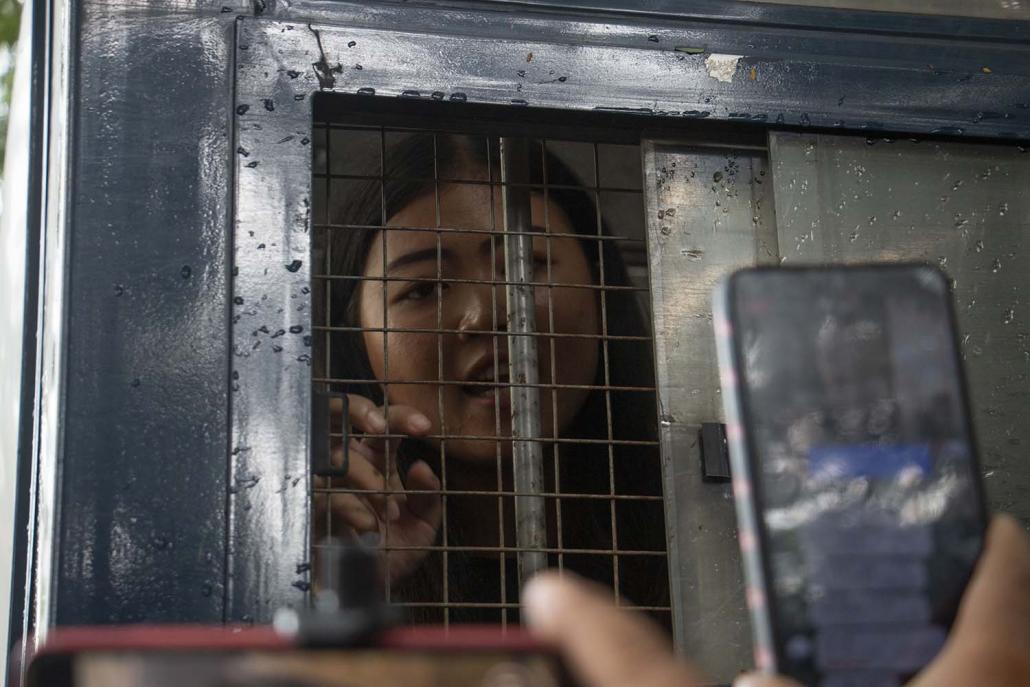 She said the pair had opted not to pay the fine because they believed they had done nothing wrong. “We are expressing our rights through not paying this fine to show the failure of the law, the puppeteering and influence behind our trial.”

Seng Nu Pan led the crowd in chants, including, “We don’t want your version of justice. We don’t trust the law in Myanmar!”

After boarding the van, she shouted through its barred windows, “They have jailed us because we were fighting for the rights of the displaced. However, we will never stop fighting. We will continue to fight for justice and urge you all to join.”

Addressing a crowd of supporters, some holding placards reading, “The judicial system is broken”, “No freedom of expression”, and “Are we guilty for demanding an end to war?”, Pan Lu asked, “How is the government seeing the peace process? Are they thinking about our displaced civilians?”

Their lawyer, U Mar Hkar, said the verdict proved that freedom of expression was not yet realised in Myanmar, and that the application of the Peaceful Assembly and Peaceful Procession Law hindered the rights of citizens.

Ko Maung Saungkha, founder and executive director of Yangon-based Athan, which campaigns for freedom of expression, said the verdict sent a message to ethnic nationalities in areas affected by conflict.

“To put ethnic activists in prison is really dangerous for the country … I believe these cases are a significant obstacle to achieving federalism.” 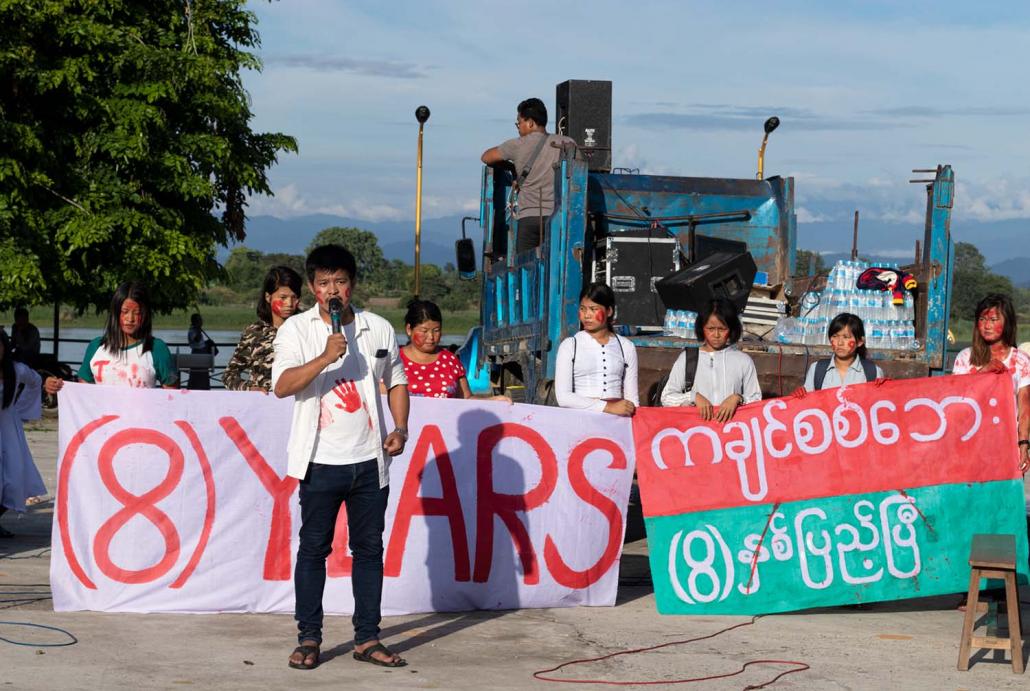 Maung Saungkha said legal reform was needed to guarantee the right to freedom of assembly.

Data compiled by Athan shows that there were more than 70 court cases in the first six months of this year in which more than 250 people faced charges involving freedom of expression. They included seven cases, involving 43 people, charged under the Peaceful Assembly and Peaceful Procession Law, it said.

Kachin activist Lum Zawng, chairperson of the All Kachin Youth Union, said the verdict showed that State Counsellor Daw Aung San Suu Kyi and other leaders “do not care what the youth are talking about.” The verdict would “push the youth to be more divided and aggressive,” said Lum Zawng.

He said the verdict also shows an intent to suppress the voices of the displaced, and that “the government doesn’t want to show what civilians are facing in conflict areas.”

He added that Kachin youth aim to send a message of peace. “We want to transform our country and our society peacefully. The government must give the young generation a platform to freely express our concerns,” he said.

Lum Zawng was one of three activists sentenced to six months’ imprisonment and fined K500,000 by Myitkhina Township Court December 2018 after being convicted of criminal defamation in a case brought by the Tatmadaw for leading a peaceful sit-in at Myitkyina’s Manau Park that called for safe passage and humanitarian access to people trapped by fighting in Kachin.

Appeals by the trio were rejected, but in late April Lum Zawng and lawyer Zau Jat were among thousands of prisoners released under a presidential pardon. The third activist, Nang Pu, was released from prison in early April because of her poor health.