A vindictive junta is further undermining rule of law by cracking down on lawyers who represent victims of political persecution. Some of them now face the prospect of lengthy prison terms just for doing their jobs.

Yangon lawyer Ko Tun Tun Win* never thought he’d be at risk of arrest because of his career, but that changed after the coup when he began taking on pro bono work for arrested activists.

“I only know how to be a lawyer, that’s why I chose to work for free on behalf of detained activists,” said Tun Tun Win, who is in his mid-30s and has been practising for 15 years. “I’ve been successful in my career and my parents are proud of my work as a lawyer,” he told Frontier on August 11.

The relentless persecution of activists and ordinary citizens who oppose the coup has coincided with a stream of arrests of the people who try to defend them in what passes for a legal system under the junta.

Lawyers such as Tun Tun Win now live in fear of being arrested by the military at all times.

“My family and I feel insecure. I have to be prepared to be arrested by the military,” he said. “Sometimes I see police trucks near my home and I think they are coming to arrest me.”

The arrests of lawyers began in April 2021, just two months after the coup, generally targeting those defending protest leaders or members of the ousted National League for Democracy government.

“The military made these arrests on purpose. They want to create fear among lawyers who are defending political prisoners,” said Mandalay-based lawyer Ko Myint Tun*.

Lawyers defending detained activists and politicians are usually charged with incitement under section 505A of the Penal Code, for which the maximum penalty is three years’ imprisonment. The charge has emerged as the junta’s preferred catch-all form of legal persecution since the coup. Radio Free Asia reported that 27 lawyers have been detained since the coup, including some of the nation’s best-known lawyers, some of whom are facing even more serious charges.

Among them is Daw Ywet Nu Aung, who rose to prominence for defending the victim’s family in the notorious “Victoria” child rape case in Nay Pyi Taw in 2019, and for representing Myanmar Now Editor-in-Chief Ko Swe Win in a defamation case brought by supporters of extremist Buddhist nationalist monk, U Wirathu, in 2017.

Ywet Nu Aung was a member of the legal team representing ousted Mandalay Region chief minister Dr Zaw Myint Maung and other NLD leaders when she was arrested in late April and charged under section 50(j) of the Counter-Terrorism Law. She was accused of funding People’s Defence Forces and faces a possible life sentence.

“She was arrested on April 27 when she returned from Obo Prison during the trial of Dr Zaw Myint Maung,” a lawyer close to her told Frontier. Many lawyers are arrested while attending trials at special courts inside prisons, adding another layer of intimidation to the legal proceedings.

On June 29, lawyer U Tin Win Aung, who had defended prominent Monywa protest leader Ko Wai Moe Naing, was arrested at Obo Prison along with lawyers U Thuta and Daw Thae Su Naing, who were defending other clients. The lawyers had been attending trials in a special court in the prison.

Tin Win Aung suffered multiple injuries in the interrogation that followed his arrest, including a broken arm, sources close to him told Myanmar Now.

Mandalay lawyer Myint Tun told Frontier that fellow lawyers U Thuta and Thae Sun Naing were also beaten during interrogation. “They suffered a lot of injuries,” he said, adding, “it is dangerous for lawyers to defend prominent politicians.”

Myint Tun believes U Thuta and Thae Sun Naing are likely to be charged under the Counter-Terrorism Law or section 505A. “The military prosecutes arrested lawyers under whatever section they like. If they want to arrest us, they can arrest us at any time,” he said.

Initially, prominent lawyer U Moe Zaw Tun, who had been defending Sagaing Region chief minister and NLD central executive committee member Myint Naing, considered taking on Wai Moe Naing’s case. He decided against it after hearing rumours it would lead to his arrest, but was detained anyway on June 20.

“When my son was arrested, we hired lawyers in Monywa. While they were preparing to handle the case, they received information that they were at risk of being arrested. There were no other lawyers in Monywa who would handle my son’s case,” Daw Moe Sandar Kyu told Frontier.

Wai Moe Naing’s family then turned to Tin Win Aung and another Mandalay lawyer. But after Tin Win Aung was arrested in late June, his family let the other lawyer go, fearing he would also be arrested. They did not seek new representation.

“We were worried about the possibility of arrest if we engaged another lawyer; we didn’t want to cause trouble for others,” Moe Sandar Kyu said. “When the hearings began against Wai Moe Naing in the prison court, he didn’t have a lawyer.”

On August 10, Wai Moe Naing was sentenced to 10 years’ imprisonment after being convicted of five counts of incitement under section 505A. Wai Moe Naing is facing a host of other allegations, for which there is little evidence, including murder, abduction and robbery. The most serious charges stem from his alleged involvement in the death of a policeman and abduction of a military informant in Monywa in 2021.

“My son didn’t commit these crimes. He was not in the area at the times they were committed,” Moe Sandar Kyu said. “I am very concerned about the murder charge. I want justice for my son,” she said.

Moe Sandar Kyu said it was stressful to have to rely on lawyers defending other cases at the court in Monywa Prison to communicate with her son.

Tun Tun Win, the Yangon-based lawyer, said the military council should not be vindictive towards lawyers defending political cases.

“If there is a case, it is the defendant’s right to hire a lawyer. The military should stop arresting lawyers for no reason,” he said.

“Many lawyers are afraid to handle the cases of detained activists,” said Myint Tun. “The military does not want lawyers defending activists,” he added.

‘There are no fair verdicts’

Ko Kyaw Kyaw Oo,* a member of a legal team in Mandalay Region that has been defending a prominent politician, told Frontier on August 9 that lawyers defending politicians in the special prison courts established after the coup know they are being monitored.

“Intelligence officers are monitoring what we do at court, including recording the questions we put to witnesses,” he said.

“We need to be very careful when we ask questions,” he added. Kyaw Kyaw Oo declined to reveal the name of his client for his own safety.

Tun Tun Win said that, in addition, prison officers, police and even some judges are also now monitoring lawyers in prison courts.

“When defending the charges, the questions available to us are limited,” Tun Tun Win said, adding “hiring a lawyer does not give defendants the right to a defence.”

Sometimes the limits imposed on defence lawyers like Tun Tun Win are explicit; after one hearing he was approached and warned by officials not to ask certain questions again. Further details of the case and the warnings Tun Tun Win was given have been withheld to protect his anonymity.

Lawyers say that judges in the special prison courts are also under scrutiny; many believe judges are unable to independently determine verdicts because they are decided for them in advance by junta officials. Lawyers told Frontier that in every case they had observed, activists were found guilty and sentenced regardless of the evidence or lack thereof.

“The judge is the most powerful person in the courtroom, but even they are being watched,” Tun Tun Win said, claiming there are “no fair judgments”.

“If it’s a case involving an activist or a politician, they will definitely be jailed. We know in advance that anyone charged under section 505A or section 17-1 [of the Unlawful Associations Act] will receive a three-year jail sentence,” he added, noting that this was based on his experience of recent sentencing.

Kyaw Kyaw Oo agreed that lawyers defending political cases have no hope of securing an acquittal for their client.

“No matter what you do, you will lose. On the other hand, if you ask the wrong question, you yourself will be arrested. This is why more and more lawyers are avoiding political cases,” he said.

There do seem to be some rare exceptions. In July, Daily Eleven reported that Daw Nwe Nwe Aung, chair of the NLD’s Mawlamyine Township chapter in Mon State, had been acquitted on counter-terrorism charges and released after nearly eight months in prison. In June, the Myitkyina Township Court acquitted Dr M Kawn La, chair of the Kachin National Congress, of a charge of incitement under section under 505A, according to DVB.

‘Lawyers are messengers for us’

Given prison sentences are virtually guaranteed for political defendants, even with the best legal representation possible, activists and lawyers have another theory for the motivation behind the crackdown.

“All the detained activists know that even if we hire a lawyer, we will definitely receive a prison sentence. Every political prisoner knows that,” said Ko Maung Myat Thu, a member of the University of Yangon Students’ Union. “But lawyers are the only outsiders we have access to and to whom we can tell everything about what’s happening in prison. That’s why we hire lawyers. Lawyers are messengers for us.”

Kaung Myat Thu said lawyers may be arrested to prevent them from passing on information to family members and the media about conditions in prisons and the special courts. He was arrested in March last year for protesting the coup and released in a mass pardon in June of that same year.

“If we are being beaten or tortured in prison, lawyers can speak out about everything we face in jail,” said Kaung Myat Thu, who was charged under section 505A after his arrest and sentenced at a special court in Insein Prison.

Tun Tun Win agreed that the military council was targeting lawyers because of what they were told by clients about abuses in prisons.

“Only a lawyer can tell the media about the prison courts and the conditions for political prisoners in prisons,” he said. “But the military does not want lawyers to leak that information. That’s why they targeted us.” 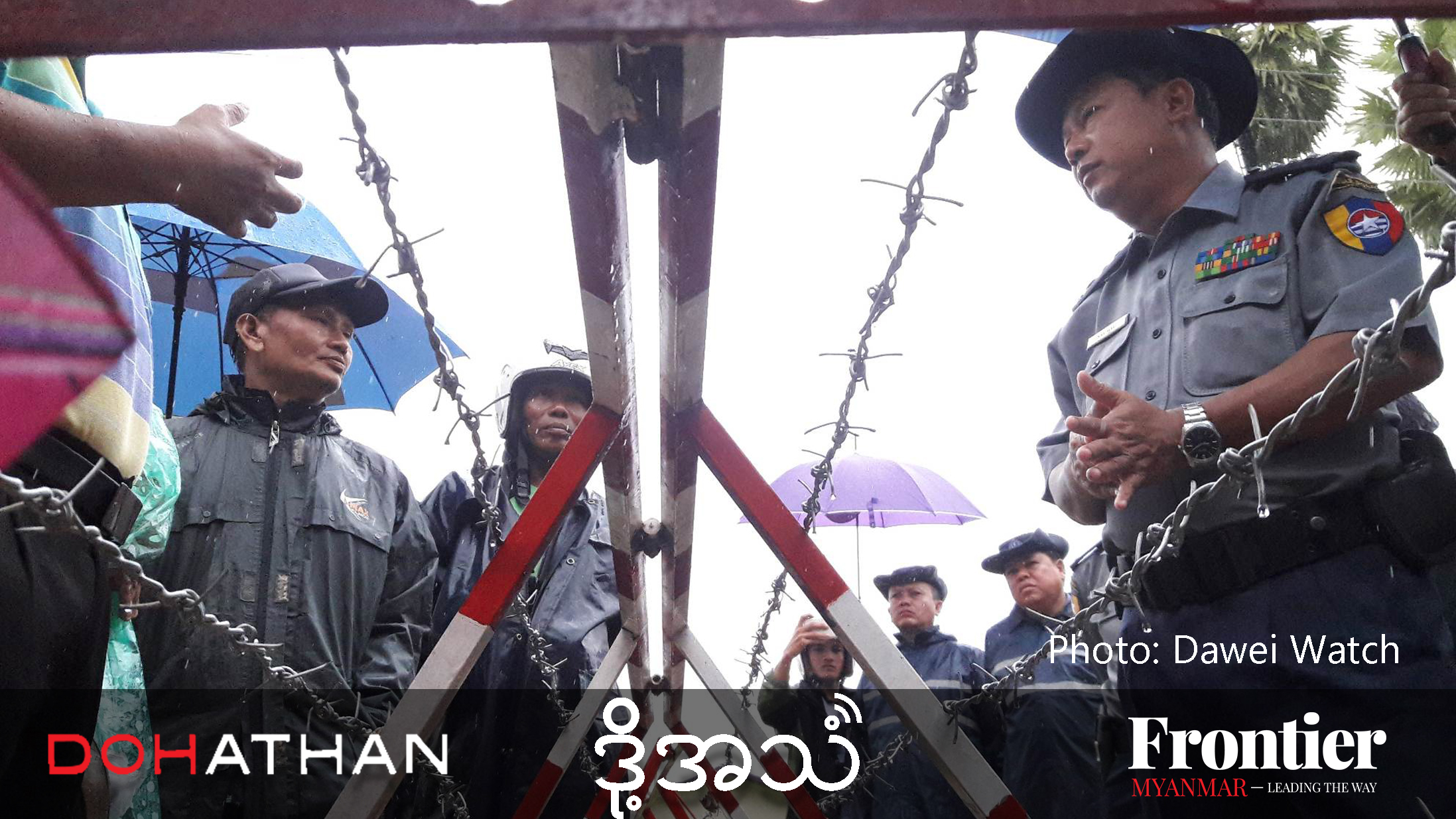