It’s time to open the hluttaws

A provision in the constitution and a civil service manual are obstacles to transparency in governance because they restrict journalists covering the nation’s hluttaws from accessing information in the public interest.

AT THE end of last year, I travelled to Nay Pyi Taw as a member of the public while I was taking a break from journalism and working as a freelance translator.

My clients were a delegation the Hong Kong Trade Council and they wanted to visit the Pyidaungsu Hluttaw, which was closed that day because it was in recess.

We were disappointed because appointments planned months in advance were cancelled at 15 minutes’ notice by Union ministers who said they had an urgent meeting. It meant the delegation could only meet ministry directors-general or permanent secretaries.

One member of the delegation asked the driver to stop outside the hluttaw because she wanted to see the parliament’s grand buildings and take some photos. I was also keen to see the hluttaw, but as soon as we alighted from the taxi a policeman on guard duty shouted at us to go away and not to take any photos.

The lady was clearly upset by this incident, which made me feel quite embarrassed.

For citizens and journalists, access to the hluttaw is tightly controlled. Earlier this year I returned to journalism and discovered that media access to government departments and to the hluttaw had become even more difficult.

Members of the public may observe parliamentary sessions at Union or state and regional hluttaws, but they must first apply in advance by filling out a registration form available at the parliamentary office.

MPs recommend that constituents seek their support to make the application process smoother. Approved visitors are allowed to sit at the back of the chamber, some distance from the speaker’s podium and the seats of MPs.

The procedure for journalists is different. They are required to register one week in advance of the parliamentary session they wish to attend. However, different procedures apply at different hluttaws.

In Nay Pyi Taw, journalists have access to the chamber for a few minutes before the Speaker arrives, as well as during session breaks and after they end. They are not allowed to remain in the chamber for parliamentary sessions and instead can only watch it on live closed-circuit television.

Restrictions vary among the states and regions. Reporters are granted access to the chamber during sittings of the Kachin and Rakhine state assemblies, but not in Yangon, where they are provided with a media room and can watch proceedings live on closed-circuit television.

When government officials and others are required to appear before the hluttaw, reporters are unable to approach them at the end of the session because journalists are not allowed to leave the area designated for the media.

I pity the government officials who, wrapped in the red tape of decades-old bureaucratic practices, do not seem to understand their responsibility as civil servants to answer questions from reporters.

Since the transition to democracy began after the 2010 election, many MPs have become comfortable talking to the media, but the mouths of government officials – even when they want to impart crucial information to the public – are normally zipped shut by various rules and regulations.

The military-drafted 2008 Constitution also provides for secrecy. Article 89 in the chapter on the legislature states: “The proceedings and the records of the Pyidaungsu Hluttaw shall be published. However, the proceedings and the records prohibited by any law or the resolution of the Pyidaungsu Hluttaw shall not be published.” 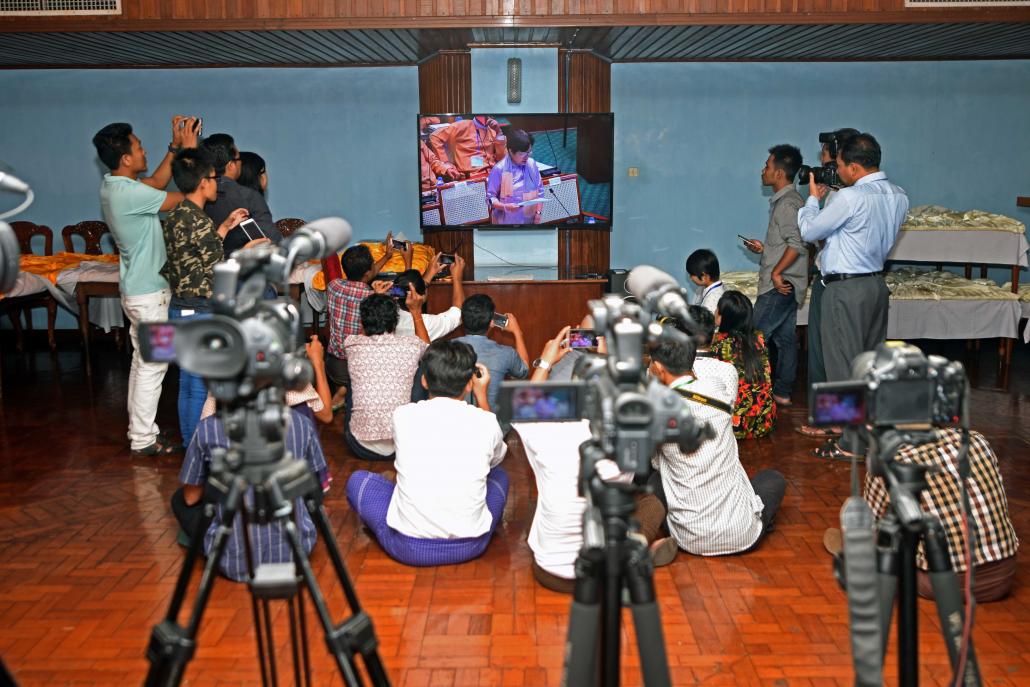 In Myanmar, the media is prohibited from attending parliamentary committee meetings.

Another obstacle to access to information are constraints on what public servants can say, as outlined in the Office Manual compiled by the Union Civil Service Board in 2008 under the Civil Service Law.

The manual classifies information according to its security status: (A) Top Secret, (B) Secret, (C) Internal, (D) Restricted, (E) Normal.

The manual prohibits public servants from speaking publicly about matters such as draft laws, development projects under consideration and even trips by high-ranking officials.

The rules of the Office Manual make me sympathise with the civil servants who avoid talking to reporters about important matters, and grateful to those are prepared to answer our questions, even if off-the-record.

We need a solution to this situation so that the media can do its job of providing information that the public has a right to know. My media colleagues and I hope the situation will be rectified by enacting a Right to Information Law.

Realising a solution will not be easy. It will involve amending the constitutional provisions and rules and regulations that bar public and media access to parliament, and reviewing the Office Manual.

An incident at the Pyidaungsu Hluttaw in 2015 helps to illustrate its sensitivity to media coverage.

From 2011 to 2013, journalists and other media personnel, such as photographers and camera operators, could get into the hluttaw and watch from the upper levels.

Journalists who worked in the hluttaw in 2013 said the parliamentary office then decided to put them into a room high above the chamber that had been built for interpreters. Although it was not physically inside the chamber they could follow events easily by watching through a glass window, and could also take clear photos and videos.

In 2015, though, there was controversy after a video operator caught a military representative voting twice – once for himself and another time for an absent colleague. The video quickly went viral.

Since then, media access to the Pyidaungsu Hluttaw has been restricted. The only private media access is granted to a single broadcaster, Sky Net.

A solution could also come through the much-delayed Broadcasting Law. Although enacted in 2015, the by-laws needed to bring it into effect have not been finalised. When it finally takes effect, it will hopefully level the playing field among the broadcast media.

The current situation needs to change and the restrictions that deny the public and reporters access to the hluttaws need to be lifted.

For government ministries, a step in the right direction would be to begin practising proactive disclosure, whereby information is released before it is requested.

Myanmar also lacks freedom of information legislation that could be used to access facts and figures otherwise off limits to the public. Work began on a “right to information” law under the U Thein Sein government, but no draft has yet been released.

The United States introduced a Freedom of Information Act in 1967 that applies to executive branch government agencies. Even non-democratic countries such as China and Vietnam have FOI laws. Though they are weak compared to those of genuine democracies, they at least demonstrate an acceptance that good governance requires transparency.

Transparency is one of the key indicators that will indicate whether the transition to democracy is successful.

In Myanmar, transparency in governance is lacking and one reason is the restrictions on public and media access to parliaments. MPs, parliamentary speakers and government officials need to start practising proactive disclosure to provide the transparency essential to build a successful democracy.