‘It would destroy everything’: Thousands protest against Myitsone Dam

MYITKYINA — Thousands of people marched peacefully in the Kachin State capital Myitkyina on Thursday against the Myitsone Dam, raising their voices in unison to the words, “Our rights! We don’t want it!”

The two-hour march began at 9am at the Kachin National Manau Park and progressed through the commercial heart of the city. The crowd, estimated by participants at around 7,000, held handwritten posters and vinyl banners with slogans including “Dams on the Irrawaddy will cut off Burma’s Lifeblood,” “Let displaced villagers return home now,” and “Cancel all dams on the Irrawaddy and its tributaries.”

Demonstrators comprised a broad spectrum of civil society, including students, elders, church leaders, activists, internally displaced people, and those relocated from their villages for the project.

A joint venture signed in 2009 between China’s State Power Investment Corporation, Myanmar’s military junta and conglomerate Asia World envisaged a series of seven hydroelectric dams that would be built on the N’Mai and Mali rivers, including at the confluence about 26 miles north of Myitkyina where the Ayeyarwady River begins.

In 2011, President U Thein Sein suspended the project in response to a growing national resistance movement. Public concerns included large-scale displacement and loss of livelihoods, the destruction of cultural heritage and environmental degradation.

In the second half of 2018, as Frontier reported in November, the Chinese government and developer SPIC began ramping up pressure on Myanmar to resolve the future of the dam.

Thursday’s protest was a direct response to a statement released by the Chinese embassy on January 13, following a visit to Myitkyina by Chinese ambassador to Myanmar Mr Hong Liang. In the statement, the embassy claimed that Kachin’s political leaders had assured the ambassador that “local people of Kachin State do not oppose the Myitsone hydropower project; it is some individuals and social organizations from outside that oppose the project”.

The statement elicited a swift rebuttal from members of three ethnic Kachin political parties who had attended the meeting with Hong Liang. They issued their own statement on January 14 saying they sought the dam’s “permanent suspension”.

Lawyer and activist Nhkum Seng Hkum Awng, 27, told Frontier on Thursday that the Kachin public wants to raise its voice and show the Chinese and Myanmar governments where it really stands. “The public are not silent,” he said. To ensure the message would hit home, signs at the demonstration were written in Chinese as well as Myanmar and English. 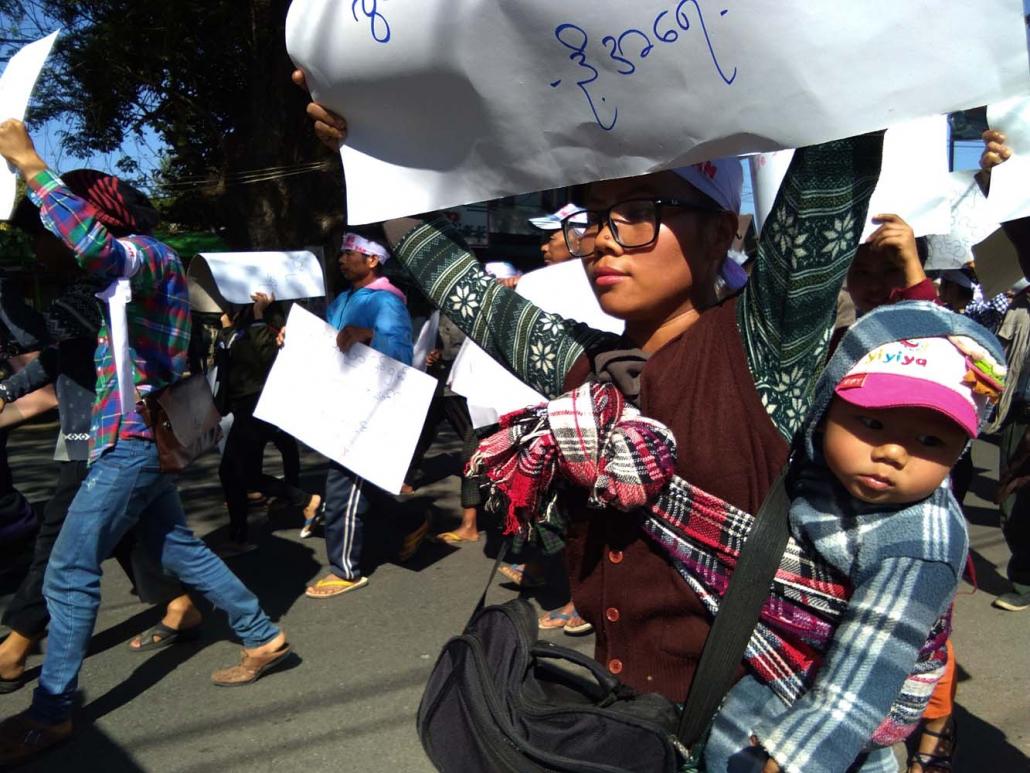 Another key aim of the protest, Nhkum Seng Hkum Awng said, is to encourage the Myanmar government to be more transparent about its negotiations with SPIC. “The government must declare the facts to the public. We want to see what is contained in the agreement between SPIC and the government,” he said.

With the 2020 general election approaching, he continued, “the public wants to know where the NLD stands on this issue. If it wants votes from the Kachin people, the NLD should announce its decision [on the future of the project].”

In August 2016, the NLD established an Investigation Commission for the Ayeyarwady-Myitsone Upstream River Basin Hydropower Projects, whose aim was to make a decision on Myitsone’s future. The commission has submitted two reports to the President’s Office, in 2016 and 2018, but has yet to make any information public.

Following the demonstration, Ja Hkawn, one of two activists who applied for the event permit, was charged with violating the Peaceful Assembly and Peaceful Procession Law. According to activist and community organiser Nwawt Naw Awng, the specific allegations were that demonstrators used a vehicle with a loudspeaker, distributed headbands printed with “No Myitsone Dam,” and included ten activities in the opening stage presentation that were not itemised on the permit application. Ja Hkawn was detained and released yesterday evening; her hearing is scheduled for February 11.

Reverend Marip Bawk San, pastor of the Njut Lung Kachin Baptist Church in Aung Min Thar village, was forcibly relocated from his village, Tang Hpre, for the project. At that time, the government moved the residents of Tang Hpre, along with those of several other villages on the banks of the Ayeyarwady River, to the newly-constructed Aung Min Thar.

Reverend Marip’s list of reasons to oppose the project is long. Beyond being displaced from his home, he worries that the project would permanently erase “my native village, my native land. It is a historical, valuable place for Kachin people and it is our natural heritage.”

He continued, “The Kachin give every place, big or small, a name. [In that area], we have thousands of names. Every stream, every brook, every street, every corner has a name, and every name has roots. If the project continues, the names will be lost.”

According to Reverend Marip, although SPIC has offered some donations to the displaced villagers, these tokens are not enough to sway their opinion of the project. “[The company] thinks the villagers are happy. They give us food, rice, clothes, a little money. They think, ‘People like our aid, they are not against us.’ But today they will see the people are against them. Last week, they came and rebuilt our church. I accepted it. But I am still against them.”

Every year since 2011, the Baptist and Catholic churches of Aung Min Thar village have come together to organize demonstrations against the Myitsone hydropower project, but this was Reverend Marip’s first time attending such an event in Myitkyina. “We have to continue to fight against it until the end. This is just the first step. For the second step, our villagers have to start moving back to our land.”

Not all participants in the demonstration were seasoned activists. Zau Tawng, 75, a resident of Myitkyina, came to the event alone in order to show solidarity with displaced villagers. Lu Ja, 56, who also lives in Myitkyina, reflected, “This dam absolutely should not happen. Its construction would be terrible for the people and would destroy everything. That is why I am here today with people from all ethnic and religious groups, to demonstrate. I just pray that the project will not continue.”

Zau Lat Aung, a 21-year-old student and resident of Aung Min Thar village, said, “I don’t know if this demonstration will stop the project or not, but still, I think it can help. Now is our chance. Today, I have hope.”