Almost a quarter of Myanmar’s COVID-19 cases are concentrated in a single suburb of Yangon, but walking the streets of Insein Township you wouldn’t necessarily know it. Preventative measures are being patchily enforced and some residents appear unconcerned about the virus.

Most of the 49 confirmed cases in Insein have been linked to religious events held by controversial Christian pastors Saw David Lah and Saw Kwe Wah. 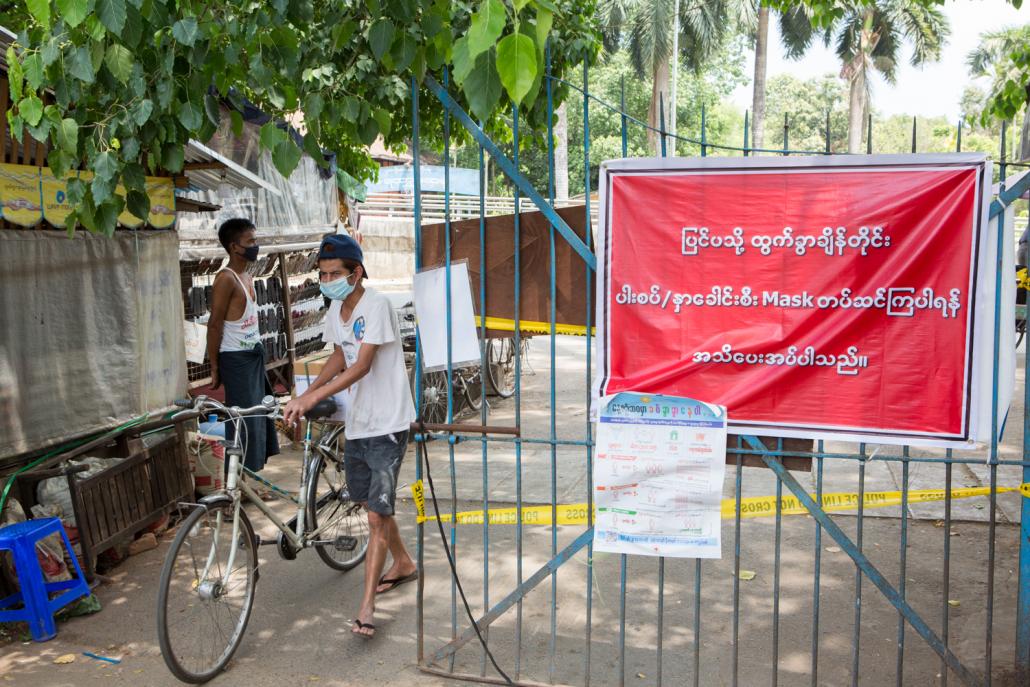 Residents of some wards in Insein Township have set up roadblocks and signboards warning people to wash their hands and wear facemasks. (Thuya Zaw | Frontier)

The events in late March and early April, which violated a ban on large gatherings, have been linked to at least 65 of Myanmar’s 224 cases.

David Lah tested positive for COVID-19 after the gatherings and has since recovered. He is being held at Insein Prison and faces up to three years’ imprisonment under the Natural Disaster Management Law. Three others who were involved in organising the sermons, including Kwe Wah, have also been charged. 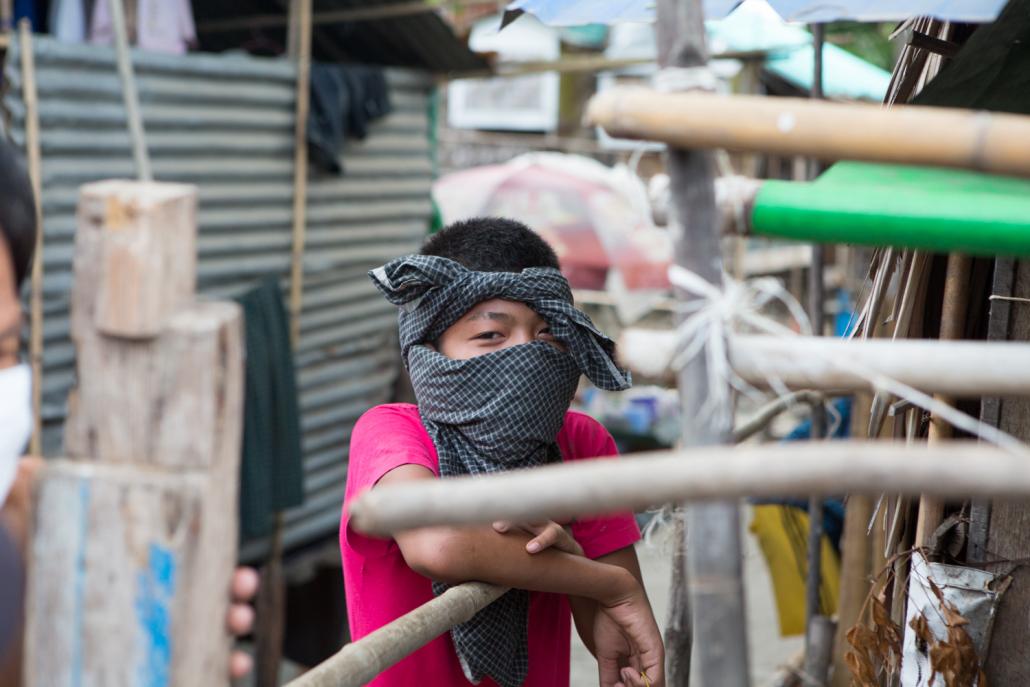 Insein and neighbouring Mayangone are the only two townships in Myanmar where lockdown measures remain in place due to the high number of coronavirus cases.

But on the streets of Insein, some are taking the threat more seriously than others. 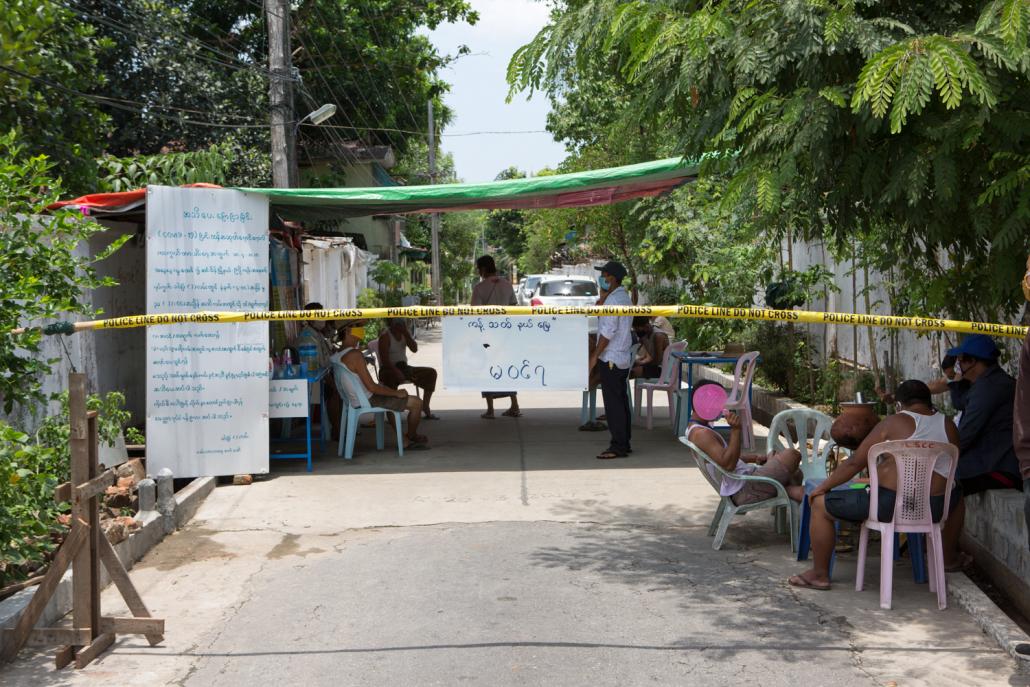 Khawal Chan 2 Street, where most of the coronavirus cases in the township have been found, remains completely closed to non-residents.

Residents of some wards have set up roadblocks and signboards warning people to wash their hands and wear facemasks. 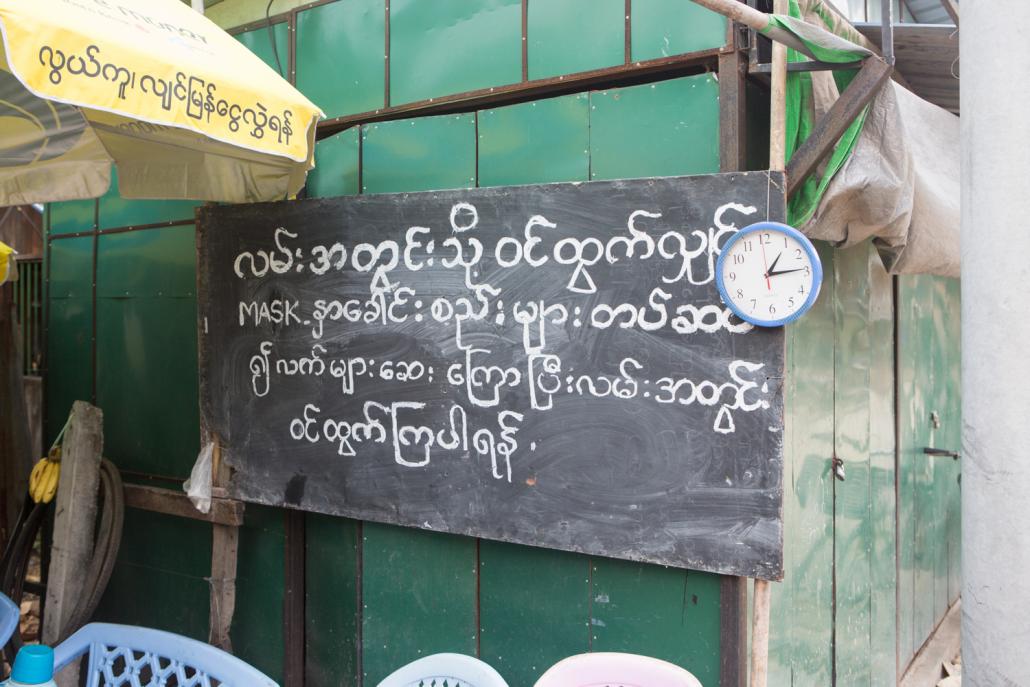 A signboard warns people to wear facemasks and wash their hands before entering the street. (Thuya Zaw | Frontier)

Others are guarding the entrances to their streets, barring entry to those who fail to comply with preventative measures.

But when Frontier visited Insein Market, most vendors and some shoppers were not wearing facemasks, and neither were the trishaw drivers and motorbike taxi drivers outside. 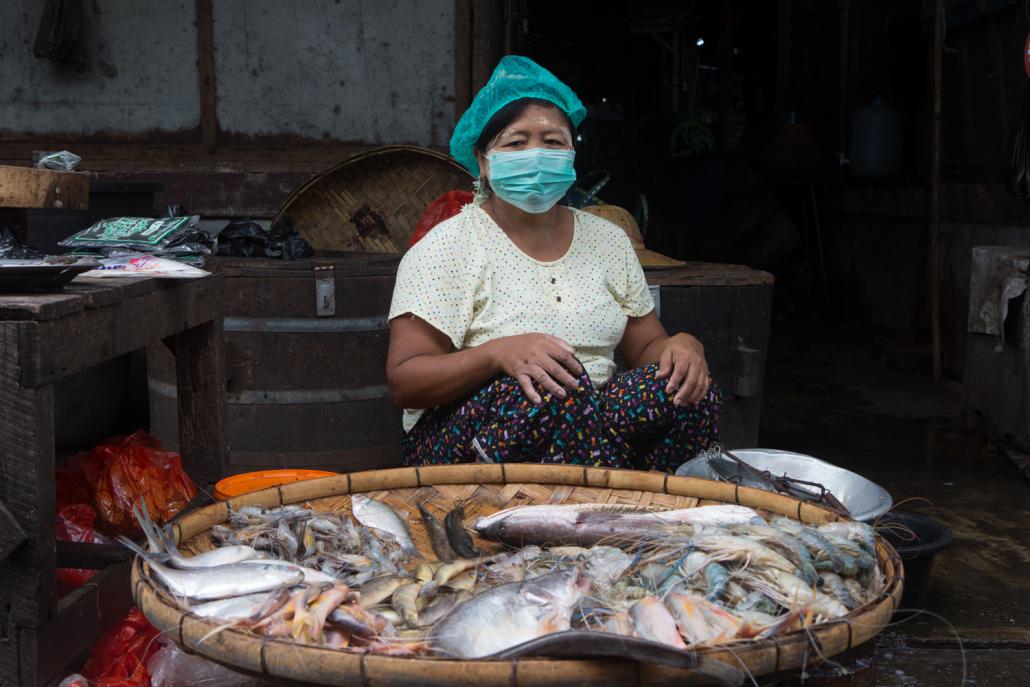 A fish vendor, Daw Hla Hla, explained that she couldn’t afford to buy a new facemask each day, and had to wash hers every night.

“Only a few customers come to the market. It’s hard to sell my fish during this epidemic,” she said. 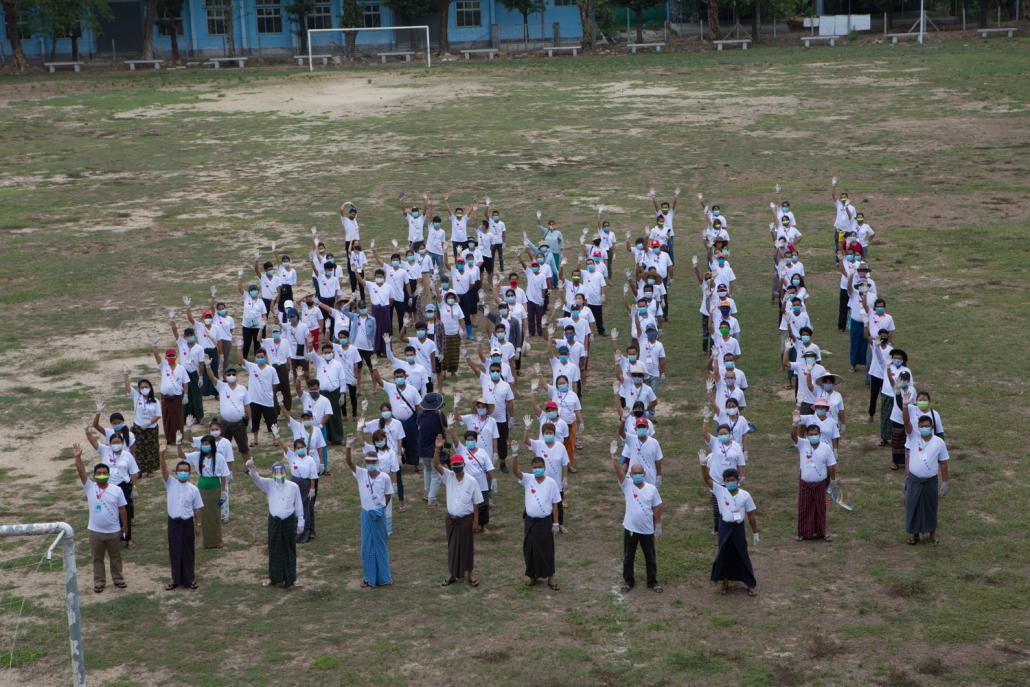 Volunteers for the “We Love Insein” charity pose for a group photo at the Government Technological Institute quarantine centre in Insein Township. (Thuya Zaw | Frontier)

A charity group called “We Love Insein” led by Yangon Region lawmaker U Wai Phyo Han (National League for Democracy, Insein-2), has been distributing facemasks in the township, most of which were donated by Chinese organisations and companies. 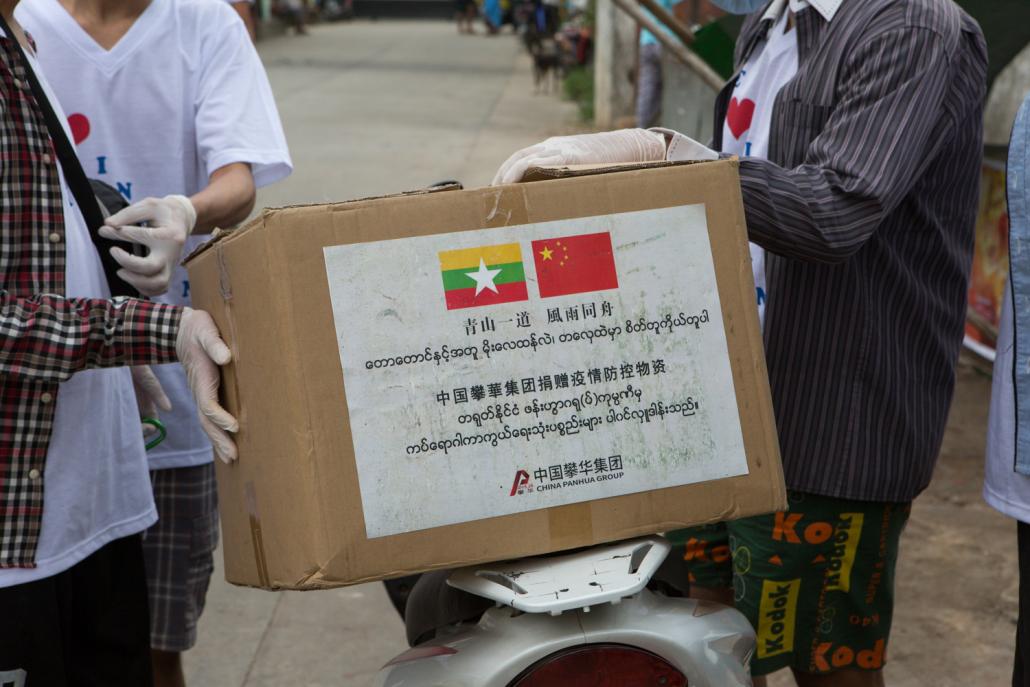 The group has also been warning residents to comply with a Yangon-wide order to wear masks in public. 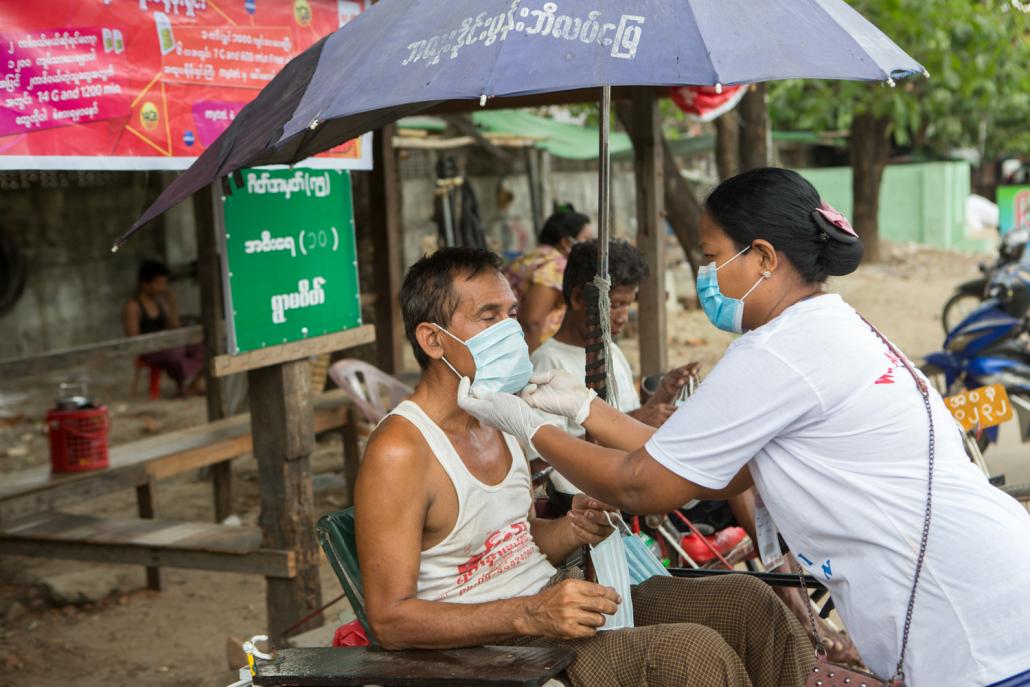 “We Love Insein” volunteers distribute facemasks to the public in Insein Township on May 17. (Thuya Zaw | Frontier)

“If you don’t want to go to the court and pay K5,000, please wear a facemask whenever you go outside,” one volunteer said while handing out masks.