In Kyaukme, a complicated conflict

The fighting that began in northern Shan State early this year is emerging as another threat to national reconciliation and the peace process.

DOZENS of villages remain empty in Kyaukme Township, a tea-growing area in northern Shan State where fighting erupted in February. The displacement of thousands of residents by the fighting has disrupted the tea harvest, from June to December. From January to April the plantations are prepared for the next harvest. Tea dominates the area’s economy and many tea growers, and their workers, are worried about their livelihoods.

The fighting involves three groups: the Tatmadaw, the Restoration Council of Shan State and its armed wing, the Shan State Army-South, and the ethnic Palaung Ta’ang National Liberation Army. The outbreak of hostilities on February 6 was followed by weeks of skirmishes. Clashes escalated last month.

After the fighting began, the TNLA, one of the groups excluded from signing the so-called Nationwide Ceasefire Agreement last October, accused the RCSS, one of the accord’s eight signatories, of receiving support from the Tatmadaw. The claim was denied at the time by the RCSS. In an indication of the complex dynamics of the conflict, it was reported to be involved in heavy fighting with the Tatmadaw in May. 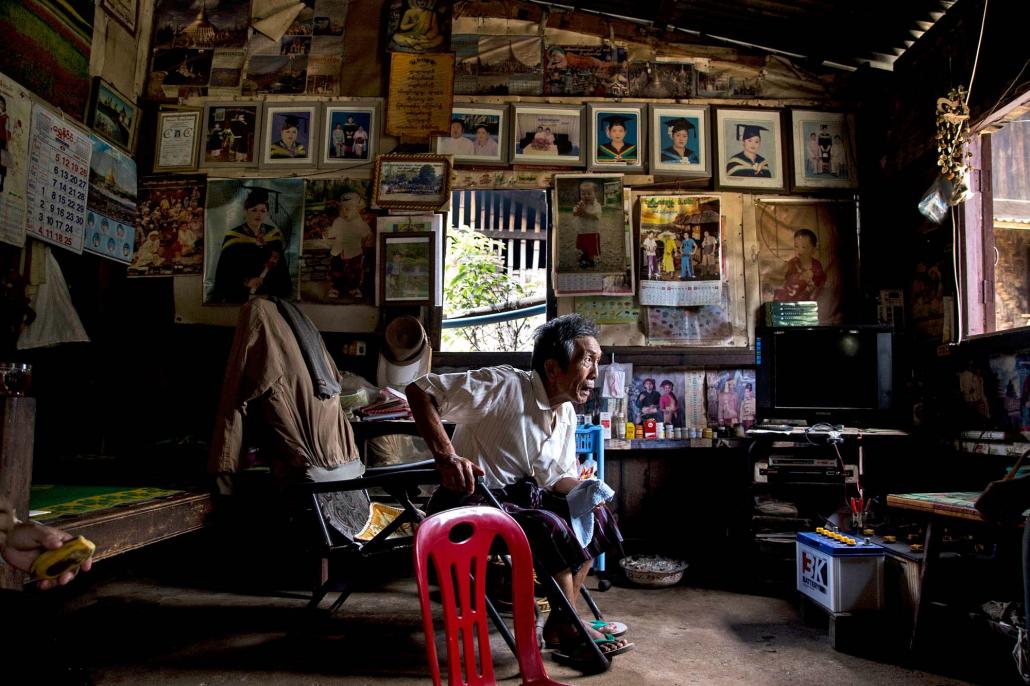 A village elder who was born and raised in Daul San village and refused to leave the area despite the recent fighting. (Ann Wang / Frontier)

Much of the fighting has occurred near Thawt San, a village about 64 kilometres (40 miles) west of Kyaukme, where the latest clash occurred between the TNLA and RCSSS on July 5.

The fighting at Kyintkai, less than a kilometre from Thawt San, lasted about four hours, he said.

Sai Tun Aung, who represents Kyaukme for the Shan Nationalities League for Democracy in the Pyithu Hluttaw, said the TNLA had withdrawn after losing 12 men.

He said the TNLA was recruiting heavily in the area and predicted more fighting.

Villagers displaced by the fighting have dispersed throughout northern Shan. Some have found casual work in Kyaukme Township and others have sought jobs on the Myanmar-China border, about 180km to the north. Some are taking the risk of travelling back and forth to their villages. It is a risk because they have no idea when or where clashes are likely to occur. Communication and transport links in the area are poor.

The drive from Kyaukme to Thawt San, along a badly potholed road, takes more than three hours. Between Pan San Village and Thawt San, a distance of about 10km (six miles), most of the villages are deserted, their houses and shops closed.

The few remaining residents in villages on the road to Thawt San said RCSS and TNLA troops could occasionally be seen in the nearby hills.

Pan San, at an intersection on the road to Thawt San village and near the border of Kyaukme and Mandalay Region’s Mogoke townships, is usually bustling with tea traders and travellers. When Frontier visited the village recently its team was the only customers in a teashop. It was one of only a few shops open in the village. On the street, the only other signs of life were dogs. 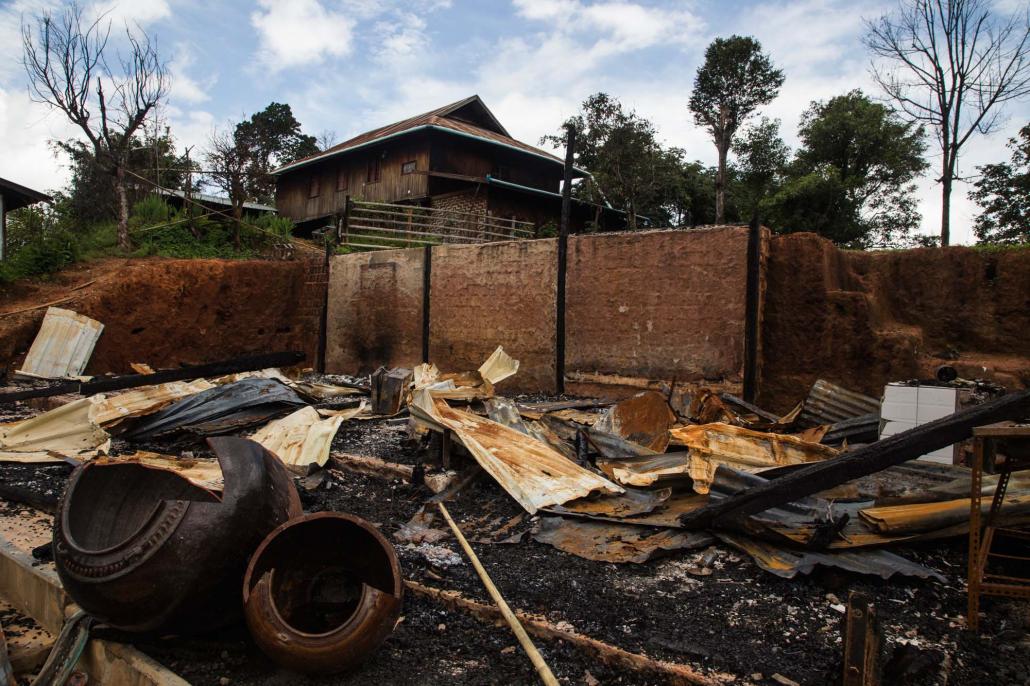 Two houses close to a school in Daul San village were burned to the ground during fighting between the TNLA and the Tatmadaw. It is unclear how the fire was started or by whom. (Ann Wang / Frontier)

“This was a very busy intersection, but now there’s so few people hardly anyone crosses the road. Most villagers have fled their homes,” the teashop’s owner, Sai Aung Tun, told Frontier. “Nobody dares to stay in the village; we have been hearing gunfire at night in the mountains.”

Sometimes artillery fired in the nearby mountains passes over the village, he said.

Pan San is closer to Kyaukme than the conflict zone around Thawt San and has been the first destination of many villagers displaced by the conflict. They have walked out of the hills to Pan San, from where they travel by road by Kyaukme.

Thawt San, one of the biggest villages in the area with more than 1,000 households, is surrounded by mountains covered in tea plantations. Almost half of the village’s households are Sino-Burmese and their presence is evident in monasteries decorated in the Chinese style. Many of the village’s residents have substantial timber houses. But most are empty and the monasteries are closed.

The village is divided into two parts: the zayyat, or market place, that is completely shut down, and the ywama, or main residential area, which is home to about 200 remaining villagers, some of whom dare not go out. 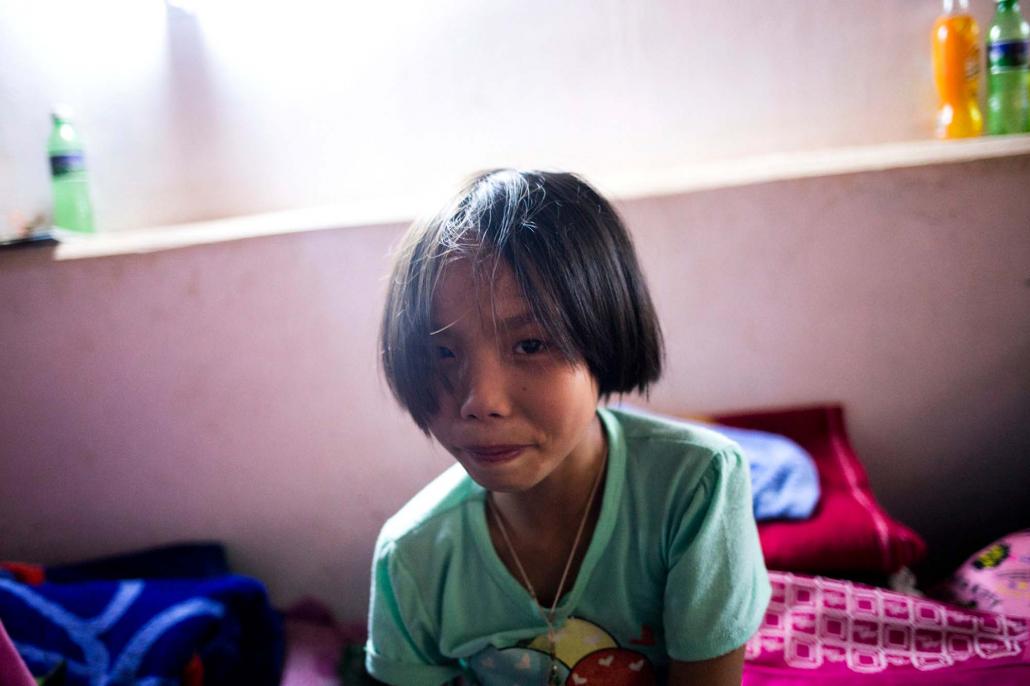 Children and elderly people displaced by the confict are staying at Aung Hsu Pan Monastery in Kyaukme, a two-hour motorbike ride from their village homes. (Ann Wang / Frontier)

Sai Nyar Lainda, 73, a Shan resident of Thawt San, has no intention of leaving, despite the fighting.

“I’ve seen the fighting between all those armed forces, the Burmese army [Tatmadaw], the RCSS and the Palaung [TNLA]; we’ve all experienced violations when they have come here to occupy the land. It has been terrible, but I have never left my village — never,” Nyar Lainda said.

TNLA soldiers had requisitioned their houses and stayed as long as they liked and villagers also had to provide them with food, he said.

Nyar Lainda’s house is only about 60 metres (200 feet) from Gantgaw Gone, the area’s highest hill and the focus of much fighting because of its strategic significance.

There was heavy fighting in February after the RCSS seized control of the hill as the TNLA was advancing towards the village. Houses, schools and monasteries were destroyed or damaged by artillery rounds and small arms fire. 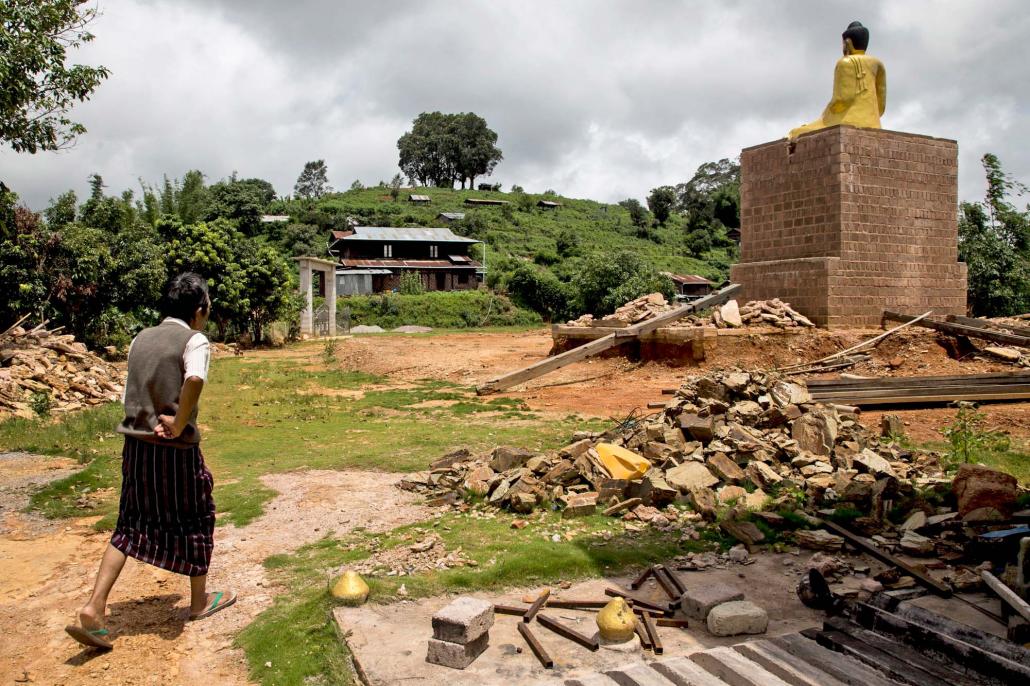 Those affected by artillery fire in February included Daw Shwe Myint, 77, whose house was hit by a shell. “There was shellfire and gunfire over my roof and it felt like it was inside my head,” she told Frontier.

Shwe Myint sought refuge in Kyaukme. After her home was repaired by volunteers she returned to Thawt San in April when the fighting died down. When the fighting resumed last month she fled again to Kyaukme.

About 4,000 people sought refuge in Kyaukme in February, and dozens of shelters were established. They returned home after the lull in the fighting and when it resumed many did not return to the shelters but instead travelled further afield to look for work. Many are parents who have left their children at shelters at four monasteries in Kyaukme.

Monks and donors are helping with food and other needs.

U Varama, guardian of the shelter at Aung Hsu Pan Monastery, said there were enough donations to support the IDPs but expressed concern about meeting their needs over the long-term.

“The donations are still enough, but we’re not sure [whether they will last] for a year and I’m not expecting there to be a ceasefire,” he told Frontier. 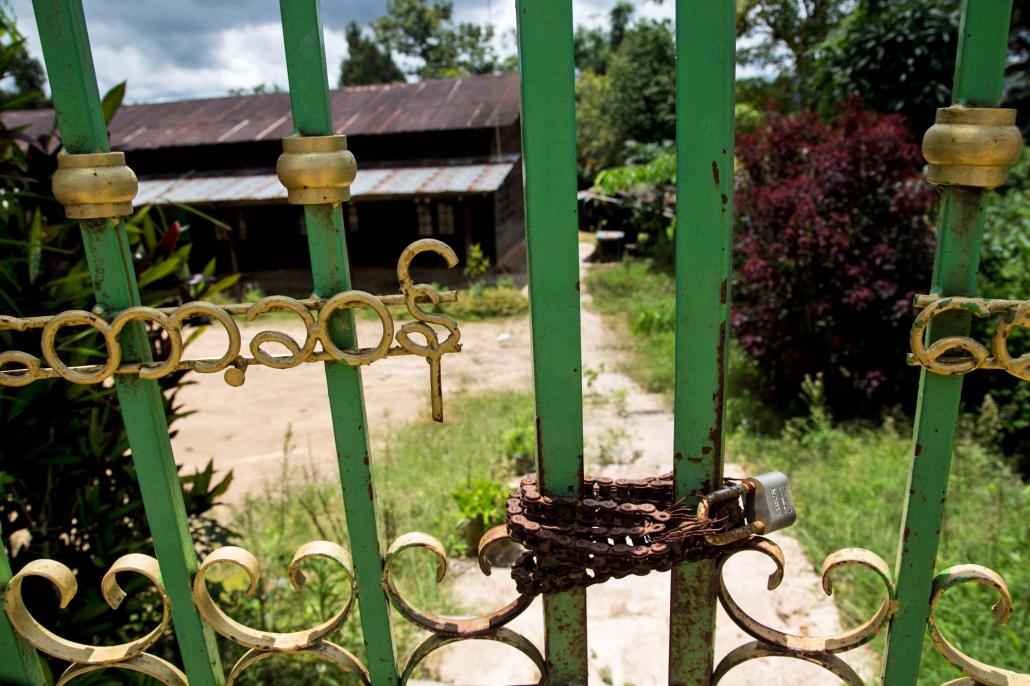 The gate to the school in Daul San village has been padlocked shut. (Ann Wang / Frontier)

A blackboard in the monastery records a donation of K20 million made on behalf of Pyithu Hluttaw Speaker U Win Myint, and donors in Kyaukme have given about K50 million toward the cost of supporting the IDPs.

On February 16, Sai Tun Aung submitted an urgent proposal in the Pyithu Hluttaw for ceasefire and it was accepted by 412 votes in the 440-member chamber, an indication that it was supported by unelected military MPs.

Nothing came of the move and Sai Tun Aung said he gave up on the idea.

When the United Nations special rapporteur on human rights in Myanmar, Ms Yanghee Lee, recently made her fourth visit to the country early this month, she was refused permission to visit Kyaukme and another northern Shan conflict area at Kutkai, about 140km (90 miles) to the north, on the road between Lashio and Muse. Officials cited security reasons for blocking the request, though Lee was eventually permitted to travel to Lashio. “I regret that I was unable to see the realities on the ground for myself,” she said in a statement at the end of her visit on July 1. 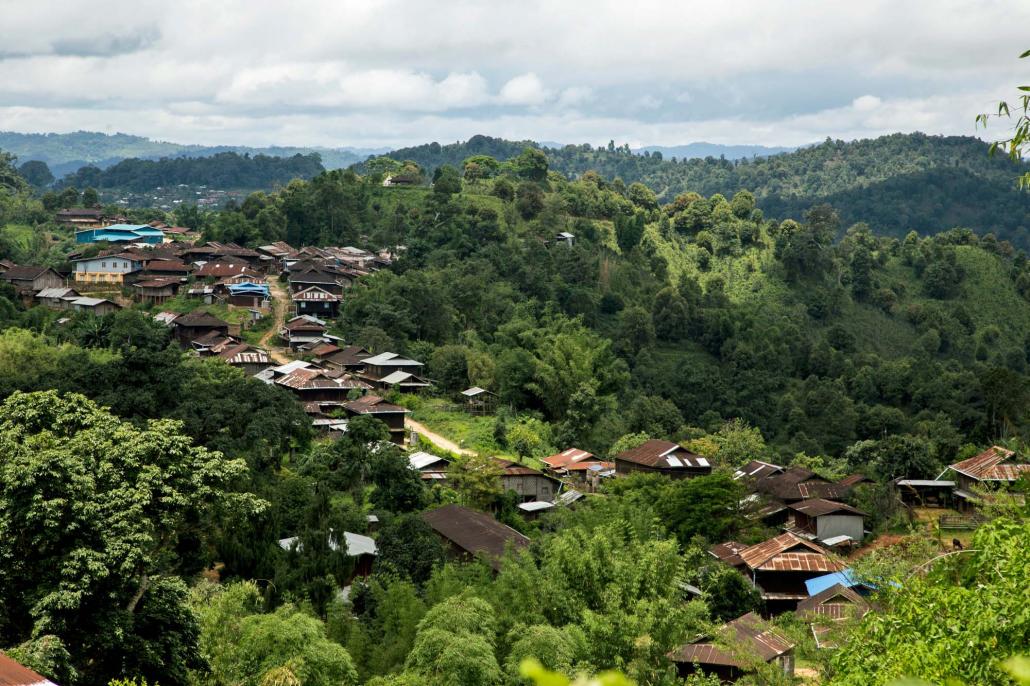 She expressed particular concern about reports from civil society groups that the fighting between the TNLA and the RCSS was beginning to create tensions between civilian communities in affected areas.

Sai Tun Aung said recent fighting also involved the Kachin Independence Army, an ally of the TNLA. He said the KIA’s 6th Division was established in northern Shan on February 26 in an area once controlled by the Communist Party of Burma.

Although Thawt San is under the control of the Tatmadaw, the TNLA wanted to control the area around Thawt San village to provide the KIA with easier communications and transport access to northern Shan State, he said.

Shan villagers remain fearful of returning home. They also want the Tatmadaw or the RCSS to guard their villages and schools.

“I’m afraid of Palaung [TNLA] soldiers,” said Nang Seng Nwan Hwan, 14, who is studying at a shelter in Kyaukme. “They do not treat the Shan people well,” she said. “I want to go home as soon as possible because my parents’ tea plantation is there.”

Title photo: The view inside a classroom at a school in Daul San Village. There was no sign of activity in the village due to recent conflict in the area. (Ann Wang / Frontier)