A plan nearing completion for Yangon’s three sacred white elephants will enable them to roam an enclosure rather than being shackled for most of the day.

WHITE ELEPHANTS are regarded as auspicious in Asia because of the belief that they bring stability, peace and prosperity to a nation. The belief is expressed in the ancient texts and legends of religions that emerged on the Indian subcontinent.

In Buddhist mythology, Queen Mahamaya dreams of a white elephant entering her womb before she conceives Prince Siddhattha, who later becomes the Gautama Buddha. In Hindu mythology, Lord Indra rides a mighty, multi-tusked white elephant known as Airavata. As a result, white elephants were coveted by the rulers of Southeast Asia’s Buddhist kingdoms; a monarch’s ownership of one or more white elephants brought status and prestige.

White elephants are also rare. They are not necessarily albinos; their pale colour is due to a pigmentation deficiency. On pictures and statues, their colour is often shown as snow white, but in reality it is more a soft reddish-brown light grey. White elephants have fair body hair and toe nails, and pale eyes.

Elephants have played an important role in the history of Southeast Asia. They have been used as beasts of burden in the timber and agricultural sectors and as steeds in time of war. The kings and princes of Burma and Siam rode elephants as they led their armies into war. In 1593, Burma’s Crown Prince Mingyi Swa and Siam’s King Naruesuan are said to have fought a duel while mounted on elephants.

The esteem in which elephants were held in Asia is illustrated by a letter from Siam’s King Mongkut to United States President James Buchanan in 1861. Mongkut said he deeply regretted hearing that the US had no elephants and was writing to offer Buchanan a pair of the animals. The letter was eventually delivered to Buchanan’s successor, Abraham Lincoln, who politely declined the offer, explaining that the geography and climate of the US did not “favor the multiplication of the elephant”.

Elephants continue to be used as working animals in Asia, including Myanmar, where they are used in the timber industry. Because of their sacred status, though, white elephants are not put to work.

In Thailand, white elephants belong by law to the monarch and are a symbol of power. White elephants also have special status in Myanmar, and the nine animals in captivity officially belong to the Forest Department of the Ministry of Natural Resources and Environmental Conservation.

Captive white elephants receive lavish treatment in most Asian countries, but not in Myanmar. The three white elephants in Yangon and the six in Nay Pyi Taw do not lead particularly royal lives.

The two females and one male in Yangon live in an open-sided pavilion at the Royal White Elephant Garden, also known as Hsin Phyu Daw Park, in Insein Township.  They are shackled for 22 hours a day, restricting their movement. Early in the morning and late in the afternoon they are taken for one-hour walks and also receive a bath. The pavilion has a wooden floor and is surrounded by trees and other plants but they are beyond the reach of the elephants.

The six animals at Nay Pyi Taw are housed in a similar enclosure in the compound of the capital’s Uppatasanti Pagoda. Visitors are often greeted by the sight of the elephants rhythmically moving their heads from side to side, behaviour known as weaving. Often misinterpreted as dancing, weaving is a behavioural disorder caused by boredom, frustration and desolation.

The living conditions of the white elephants at both locations are precarious and distressing. 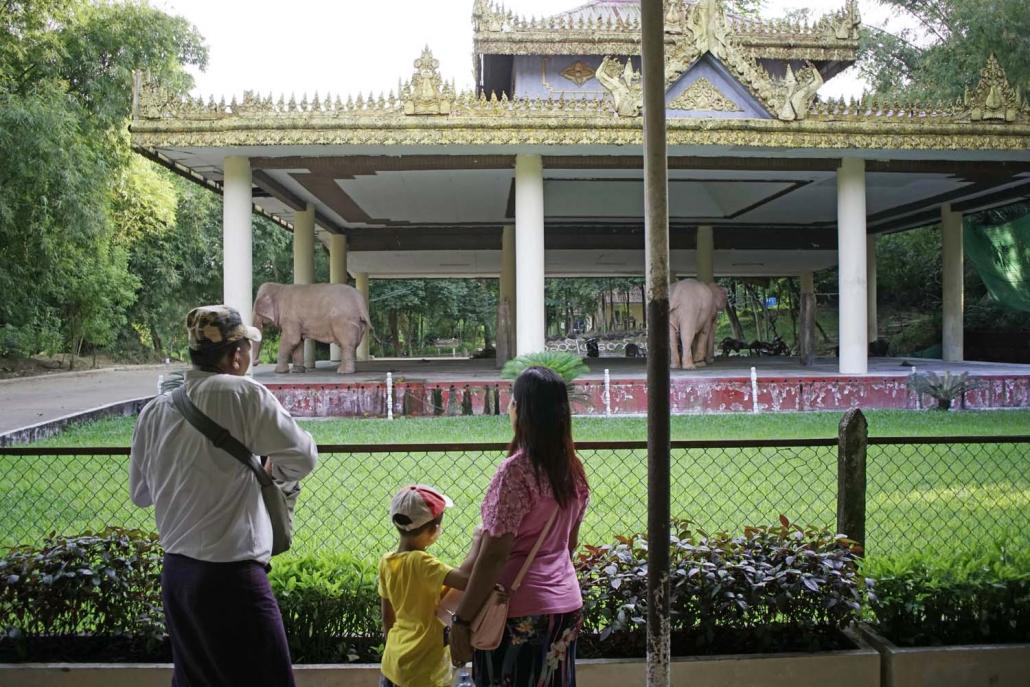 For political and religious reasons, white elephants remain a sensitive topic in Myanmar and until recently few attempts have been made to improve the environment of the animals in Nay Pyi Taw and Yangon.

Even well-known international organisations such as World Wildlife Fund have refrained from taking action. “WWF has no position relating to captive elephants but our works only focus on wild elephants,” Frontier was told by email.

However, another NGO, Austria-based animal welfare organisation Four Paws, is hoping to sign a memorandum of understanding with the Forest Department to upgrade the elephants’ enclosures.

“We want to offer a species-appropriate place for the white elephants where they can move properly. They cannot be released to the wild as they are used to humans, but we can at least offer them better living conditions,” said Dr Amir Khalil, director of project development at Four Paws and a veterinarian.

Four Paws, which has expertise in creating sanctuaries for bears and big cats, is collaborating on the project with Yangon-based NGO Mingalar Myanmar, which promotes sustainable development.

Despite not being involved in animal welfare, Mingalar Myanmar says the project is not only important for the animals but also for the nation.

“The white elephants are a treasure and very important for this country,” said Dr Phone Win, Mingalar Myanmar’s founder and director. “Now, they are kept in a traditional way; we need to improve it according to international standards.”

Phone Win said that when he first discussed the idea with officials at the ministry four years ago the response was not welcoming.

“The elephants are very sensitive; we don’t let anybody touch them,” he recalled being told.

But Phone Win, whose determination enabled him to achieve success in sport as a rower and sailor while at university, was persistent.

“It is the same as in sports: Your success is only noticed when you win a race or receive a gold medal. But you can’t just train one day before the competition, you need to work on it every day.”

After many meetings, ministry officials slowly came around to the project. When Minister for Natural Resources and Environmental Conservation U Ohn Win visited Austria to attend a United Nations conference in 2016, Phone Win seized the opportunity, taking the minister to Vienna’s zoo, the Tiergarten Schoenbrunn, and a bear sanctuary at Arbesbach. The aim of the visits was to show Ohn Win the level of care that captive animals receive in other countries.

To upgrade the habitation at the Royal White Elephant Garden in Yangon, Four Paws and Mingalar Myanmar are working with a team of specialists, elephant enclosure designers, architects and consultants.

The plan involves building two adjoining enclosures of about eight acres (3.23 hectares), to give the animals ample room to roam. A gate separating the enclosures will keep the animals apart when the bull is in must and prone to be highly aggressive.

A bathing pool and a mud wallow are also planned.

“Elephants need access to fresh water and need to be able to take a mud bath as the mud layer on their skin protects them from insects,” said Khalil. 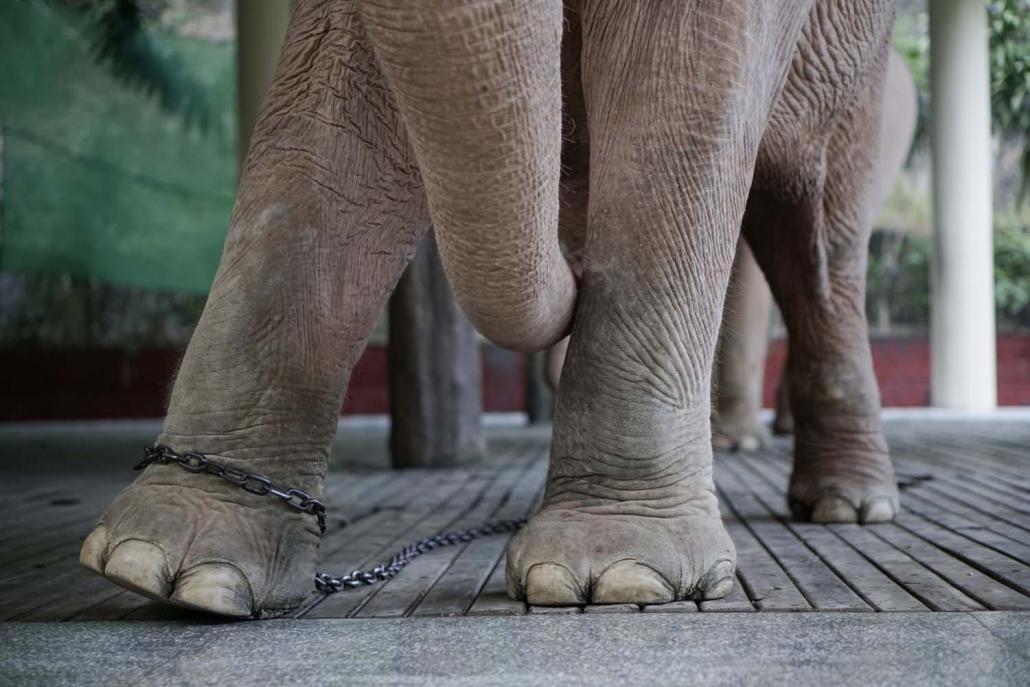 A pathway will be built around the enclosure to make it easier for visitors to see the elephants and it will feature a series of signboards providing information about white elephants.

“We want to educate people not only about white elephants, but also about the importance of animal welfare in general,” said Phone Win. The elephants’ current home will be transformed into a museum and a coffee shop.

The start of work on the project is awaiting formal approval from the government, although it has already received a green light from State Counsellor Daw Aung San Suu Kyi.

Mingalar Myanmar is drafting an agreement that it anticipates will be signed early this year to allow work to start on the project. If all goes according to plan, the upgrade will be completed by the end of 2019.

Phone Win and Khalil hope that the plan to upgrade Royal White Elephant Garden will be a model project in animal welfare that will educate people about elephants.

Phone Win hopes that in the long term, the white elephants at Nay Pyi Taw will also have a better environment. Small steps are being made.

“We are now training the white elephants and once they are well trained we will let them walk freely in the enclosure,” said Dr Wan Tun, administrator and chief veterinarian at the Nay Pyi Taw Royal White Elephant Garden. “We will start with two or three elephants.”