Police said a woman and a man had been crushed under trees felled by winds of up to 135 kilometres per hour in the coastal district of Cox’s Bazar, which bore the brunt of the cyclone.

The district is home to 300,000 Rohingya refugees, most of whom live in flimsy makeshift camps after fleeing persecution in Rakhine State.

Community leaders said damage to the camps was extensive and there had been no attempt to evacuate the Rohingya. They described how residents had to run for shelter in the middle of the night.

“In some places, almost every shanty home made of tin, bamboo and plastics has been flattened,” said Abdul Salam, a Rohingya community leader, adding that around 20,000 houses had been damaged and some residents injured.

Cox’s Bazar has for years been home to hundreds of thousands of Rohingya, a stateless minority living mostly in Myanmar.

Their numbers have swelled since a crackdown last October sent nearly 75,000 fleeing across the border into Bangladesh.

Away from the camps, authorities had evacuated more than 449,000 people to cyclone shelters after raising the highest number 10 weather danger alert as the storm approached. They had initially planned to make one million people leave their villages.

“They have been evacuated to at least 400 cyclone shelters, schools and government offices in the coastal areas,” said Golam Mostofa, the senior official coordinating the evacuation

The Rakhine State government was mobilising its own emergency response Tuesday after winds of up to 89 kilometres per hour lashed the coast at Rathedaung the previous evening.

State lawmaker U Oo Than Naing (Arakan National Party, Rathedaung-1) said officials had received word of several buildings destroyed by the cyclone on the western side of the Mayu River.

Further south in Sittwe, the roofs of some buildings were blown off overnight, while roadsigns and trees were knocked down and streets were inundated.

A total of seven townships in the north and centre of the state have so far reported storm damage.

The Department of Meteorology and Hydrology has forecast severe thunderstorms across Myanmar’s south until Wednesday afternoon. 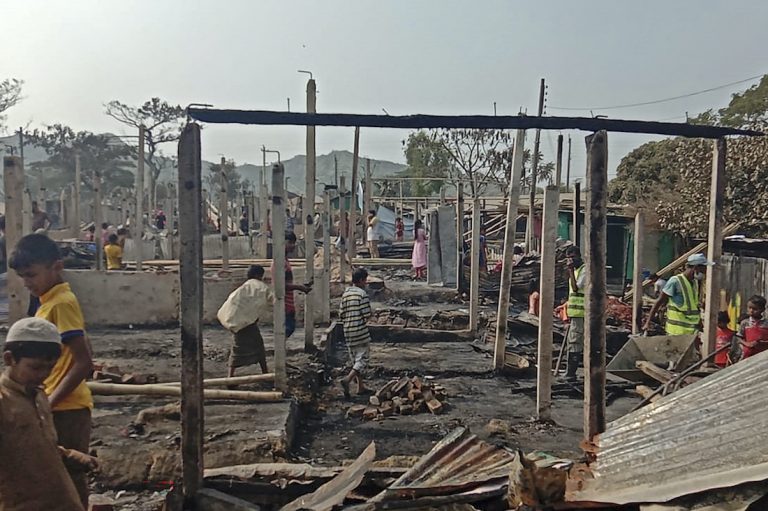 It was the latest of three fires to hit the cramped and squalid camps in the last four days, sending some 20,000 fleeing, officials said.
BY AFP