A national civil servant housing project with high-level political support that will be built using a new public-private development company has already run into opposition from local farmers, after their paddy fields were covered in sand just months before the harvest.

ACTIVISTS HAVE accused the regional government of breaching a land law in a dispute with farmers in Dagon Seikkan Township.

In late August, the government held a launch ceremony for a civil servant housing project on the 183-acre site on the city’s northeastern outskirts.

While the land is state-owned, it has been rented to farmers since the late 1990s. They accuse the government of destroying their crops without compensation – and breaking promises to delay the project until after the harvest.

The project is being managed by the Yangon Region government and funded by Nay Pyi Taw. The Voice reported in early September that the housing complex will feature 4,000 apartments that will be sold or rented to current and former civil servants at low prices.

No exact timeframe was given, although some sources said the government wanted to finish construction within three years.

The development will include units from between 300 and 1,200 square feet. Prices range from K7 million to K10 million, according to the article in The Voice.

Registered with the Directorate of Investment and Company Administration in March, the company’s directors also include Yangon City Development Committee members U Kyaw Soe and Daw May May Thwe, as well as prominent business tycoon U Win Aung of Dagon International. Until April 2015, Win Aung was subject to US sanctions because of his close ties with the military. 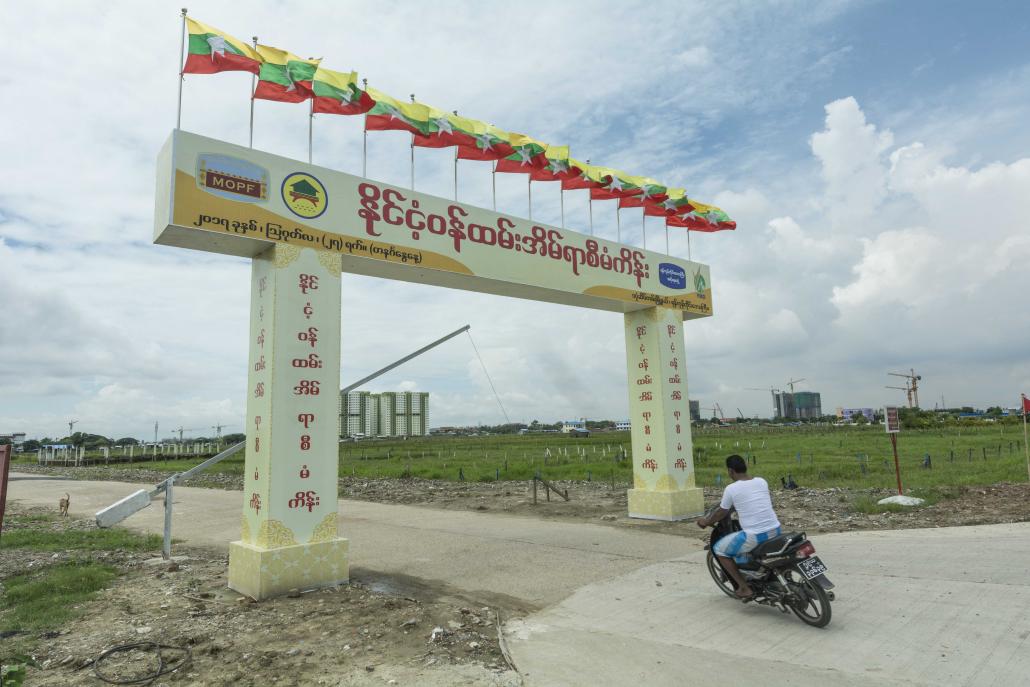 The government has previously described Yangon Metropolitan Development as a joint venture with the Myanmar Construction Entrepreneurs Association (MCEA). The government also reportedly plans to use it as the development vehicle for the new city projects, including Southwest New City.

It’s unclear how the civil servant housing development in Dagon Seikkan is being funded, or how much it will cost. Myint Thaung told Frontier the project was relatively new so the “financial model was not yet clearly known”. He referred further questions to Nilar Kyaw, who said she was in a meeting and never responded to journalists over the phone. Asked how to submit questions, she hung up the phone.

Daw Sandar Min (National League for Democracy, Seikgyikananaungto-1), chair of the Yangon Region Hluttaw Finance, Planning and Economic Committee, said the project was being funded by the Union government and “not related” to the regional government. She said she welcomed the project, adding that President U Htin Kyaw was also known to be supportive.

But Pyithu Hluttaw lawmaker U Mya Sein (NLD, Dagon Seikkan) said the project had not previously been discussed in the national parliament, either.

The land in question was confiscated in the mid-1990s for an agriculture project and the original owners were compensated at the time. The fields were then rented to nine other farmers for close to two decades, according to these tenant farmers.

One of them, U Myo Win from Dagon Seikkan’s No 77 ward, told Frontier the group was summoned by the township administrator, U Zaw Naing Oo, and informed about the project. They were told to stop growing paddy on the land.

The next day, noticeboards warning not to trespass on the land were erected. On August 18, workers from a company named Pyae Phyo Maung arrived and started covering the fields with sand. The farmers were warned not to obstruct or interfere with the workers.

On August 26, a day before the opening ceremony, the farmers were again called to the township administrator’s office. There they met U Maung Maung, a member of the Yangon Region Land Confiscation Review Committee.

Ma Hnin Ei Shin, daughter of U Khin Maung Than, who works 70 acres on the land, claimed Maung Maung told them they could continue working the fields until their crops were harvested. They were not given an opportunity to discuss their concerns about the project, she said. (Maung Maung could not be reached for comment to confirm this account.)

The next day, senior government officials – including Minister for Construction and Energy U Win Khaing, Minister for Finance and Planning U Kyaw Win, Yangon Region Chief Minister U Phyo Min Thein, regional minister Nilar Kyaw and Yangon Mayor U Maung Maung Soe – were on hand to officially open the project.

Three days later, the farmers were surprised to find that the township administrator’s office had planted flags around 50 acres so it could be filled with sand.

On September 12, a group of farmers tried to stop the company covering the fields in sand. A worker, U Soe Tint, told them that he would only stop on the orders of the government, they said.

‘The people’s government is breaching the law’

Those farming the land in question are not seeking ownership. However, they are demanding compensation for the crops that have been destroyed and for the improvements they made to the land. Section 64 of by-law for the 2012 Farmland Law states that the Central Farmland Management Body is responsible for negotiating compensation between officials and farmers so that farmers are not unfairly treated.

Section 67(a) of the by-law, which relates to compensation for crops and buildings, says that farmers are owed three times value of the crop and two times the value of any “buildings set up for better growing”. This compensation appears to apply to tenant farmers; specifically, it says any person who has permission to work the land.

U Zaw Yam, a member of local transparency group Yangon Watch, said that even though the farmers do not own the land they still have the right to compensation for crops and improvements to the land.

The Farmland Law also states that where possible destruction of crops should be avoided and farmers should be allowed to harvest already sown fields, he said.

“Covering paddy fields with sand – that means the people’s government is breaching the law,” he said. “It is quite inappropriate and has had a big affect on the farmers.” 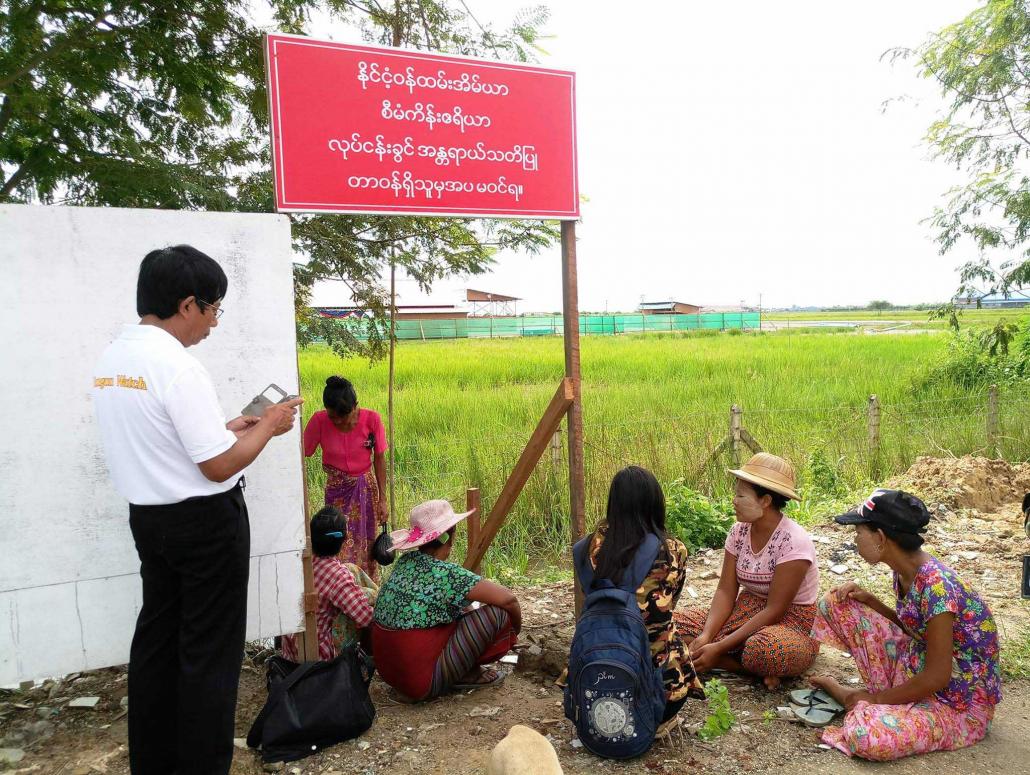 Dagon Seikkan residents sit next to a sign warning people not to enter the project site. (Su Myat Mon | Frontier)

Regardless of its legal obligations, the government should always consider how it can avoid harming people’s livelihoods, he said,

Zaw Yam said the government’s actions also contradicted the instruction from Pyithu Hluttaw Speaker U Win Myint on August 30, when he told lawmakers to work “righteously” on land cases in the interest of poor farmers. The week before, he had lambasted Supreme Court Judge U Myint Aung during a discussion on land disputes, in which Win Myint clearly took the side of dispossessed farmers.

“I just want to urge the government to be careful that it ensures the rights of the people are respected,” he said.

U Myo Win, who works six acres at the site, said that after he got permission from the government to farm the land he spent a long time making it cultivable, flattening uneven areas, removing large bushes and building dykes.

“It is not like we could easily grow rice in this land – we had to work hard for nearly three years so that the land became flat,” he said.

Myo Win said he hopes the government can arrange another piece of land for them to work instead. But most of all, the farmers say they want to be acknowledged and have the chance to explain how they feel.

“We would like to have a meeting with the officials to talk about this like a family,” Myo Win said. “At the moment we are getting mixed signals – first it was ‘you can do this’, then it was, ‘don’t do that’.”

Lawmakers out of the loop

Frontier contacted the Pyithu Hluttaw and two Yangon Region lawmakers for Dagon Seikkan, who are all from the NLD. They said they had not been officially informed about the government housing project – a surprising statement given its huge scale.

The Pyithu Hluttaw representative, Mya Sein, said he had been invited to the opening ceremony but did not attend because the invitation came at the last minute.

He said that while such projects were not lawmakers’ responsibility, the government should at least keep them informed of what is happening in their constituencies. He suggested that a local MP should also be included in the management committee for the project to improve information sharing.

“Frankly, they are neglecting us. But of course, we each have our different roles,” he said. “When lawmakers have meetings, we often say that the government has many things they need to improve.”

Mya Sein said that when he met Phyo Min Thein at an event in September he encouraged the chief minister to resolve the dispute with the farmers in order for the project to move forward smoothly.

Since August 30, the farmers have sent letters to President U Htin Kyaw, State Counsellor Daw Aung San Suu Kyi, Vice President Henry Van Thio and many other government officials, but are yet to receive a response.

For now, the farmers are relying on township administrator U Zaw Naing Oo, who plans to write to the government explaining the farmers’ predicament.

He said a decision on whether the farmers receive compensation likely rests with Phyo Min Thein, who leads the Yangon Region Land Confiscation Review Committee.

“I haven’t heard anything about compensation being approved,” he said. “It is just up to the head of the committee.”