History, culture and consciousness: the art of Aung Myat Htay

Aung Myat Htay’s new exhibition at Yangon’s Myanm/art gallery is a thought provoking exploration of Myanmar’s past and present.

Visit the latest exhibition at the Myanm/art gallery and you’ll immediately be confronted by needles lined up on a table, behind which are four stone slabs – a dark red crust filling the etchings on their surface.

The crust is dried blood, which was part of the performance art presentation by veteran artist Aung Myat Htay at the July 6 opening of the exhibition, “Consciousness of Realities”, which runs until July 28 at the gallery, located in the Urban Asia Centre on downtown Yangon’s 48th Street.

Born in Mandalay in 1973, Aung Myat Htay was exposed to art in his childhood when he helped his father to cast bronze statues. He later graduated from the National University of Art and Culture in Yangon with a fine arts degree.

“Portraits of the Disappeared”

As well as creating his own works, Aung Myat Htay has also curated exhibitions in Myanmar since 2005. His work has been exhibited throughout Asia, including Thailand, Indonesia and the Philippines, and he has participated in artist-in-residence programmes in Japan and the United States.

A description of “Consciousness of Realities” on the event’s Facebook page says the exhibition is “intended to examine the roots of local community through its psychosocial characteristic features”. It adds that “the relationship of otherness has physical and mentally bound into one culture even different colours, languages, behaviours and beliefs”, and that Aung Myat Htay’s work explores the relationship between humans and their natural environment.

For some pieces in the show, it’s easy to see the connection. 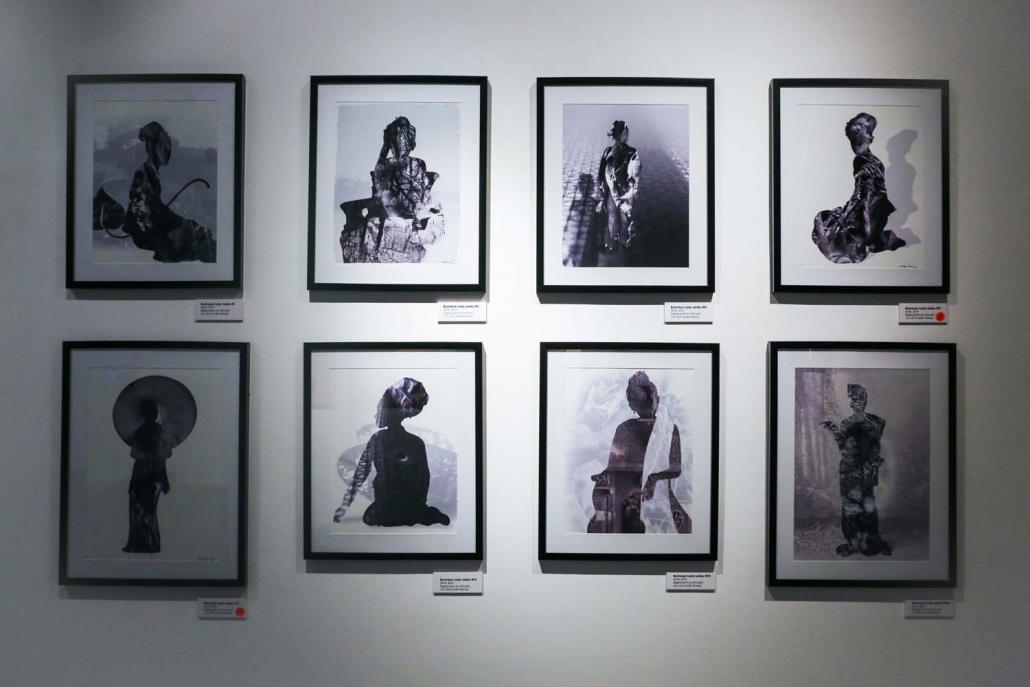 The same theme can be seen in the series “The Strangers: Folk of Unseen People”. It consists of long rectangular frames containing silhouettes of what you’d find in a typical Myanmar village: monks, ox carts and women carrying parasols and smoking cheroots, all filled with images of flora, fauna and rocks.

On the opposite wall, the “The Shadow: Portraits of the Disappeared” series repeats the silhouette of a woman, based on a photo taken during the Konbaung dynasty (1752-1885) and filled with black and white brush strokes and surrounded by mustard-gold paint. The paintings are as easy to look at as they are to walk by with just a glance. They would look lovely in any heritage home, such as those refurbished by Doh Eain, but they seem to lack depth and don’t show the full extent of Aung Myat Htay’s ability.

Some pieces in the show veer towards political topics, which is a common tendency among Aung Myat Htay’s generation of artists.

Mixed-media piece “The Window” combines Myanmar history with art in a thought-provoking way. It consists of a rectangular frame with a sliding panel, either side of which are steel plates with contrasting coin emblems embossed on them; one coin represents the last kingdom of Burma, the other the Socialist era. The sliding panel represents a window that can only open partially, representing the “gap” between two eras in Myanmar’s history. The description of the work ends by posing the question, “Is this a truly balanced position?”

At one end of the gallery is a series of canvases named “Geo-Scape”. The swirling colours on the canvasses give the impression of a landscape viewed from an airplane, and the artist’s statement says that’s just what he meant to convey. He says, “We citizens are not permitted to travel to all corners of the country, thus I felt interested to encounter these features via satellite”. 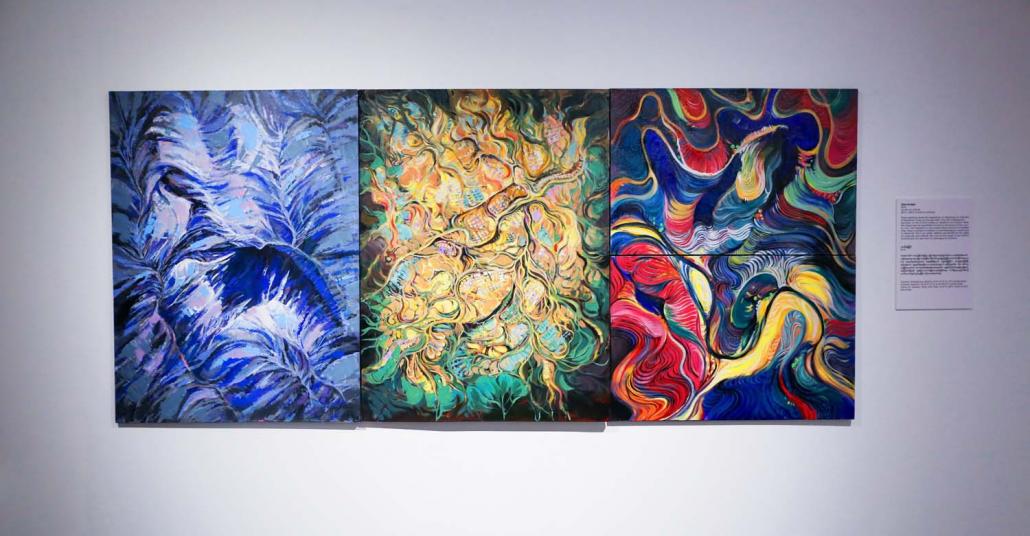 Aung Myat Htay’s show commendably embraces multimedia, with other pieces on display including video, a monk’s crimson robe and, of course, the series of blood-filled carvings. Titled “The Book of Institution”, the artist says the series draws inspiration from Myanmar’s military-drafted 2008 Constitution.

Although some of the creations lack creativity, the exhibition overall features works with clear connections to the stated theme and includes several standout pieces that already have orange “sold” stickers on them. If you’re downtown, the show is certainly worth a visit.