Witnesses to the attacks who have fled to Bangladesh have said they were launched by a Rohingya insurgency, but questions remain as to why authorities took almost a month to investigate the claims.

LATE LAST month, the Myanmar government said it had found a mass grave of 45 Hindu villagers close to Yebawkya village in Maungdaw Township. In state-run media reports, the government put the blame for the attacks on fighters from the Arakan Rohingya Salvation Army, which it has officially declared a “terrorist organisation”.

According to the latest estimates, about 500,000 people – mainly Muslims who identify as Rohingya – have fled across the border into Bangladesh since August 25. The fighting has also displaced around 30,000 non-Muslims, including Rakhine, Mro and Hindus, who have mostly sought refuge in government-controlled areas of Rakhine State.

Frontier was able to speak by telephone with Ma Mari Khal, a Hindu who fled to a refugee camp in Bangladesh, who said she witnessed the attacks. She said they were launched by members of the state’s Muslim community. 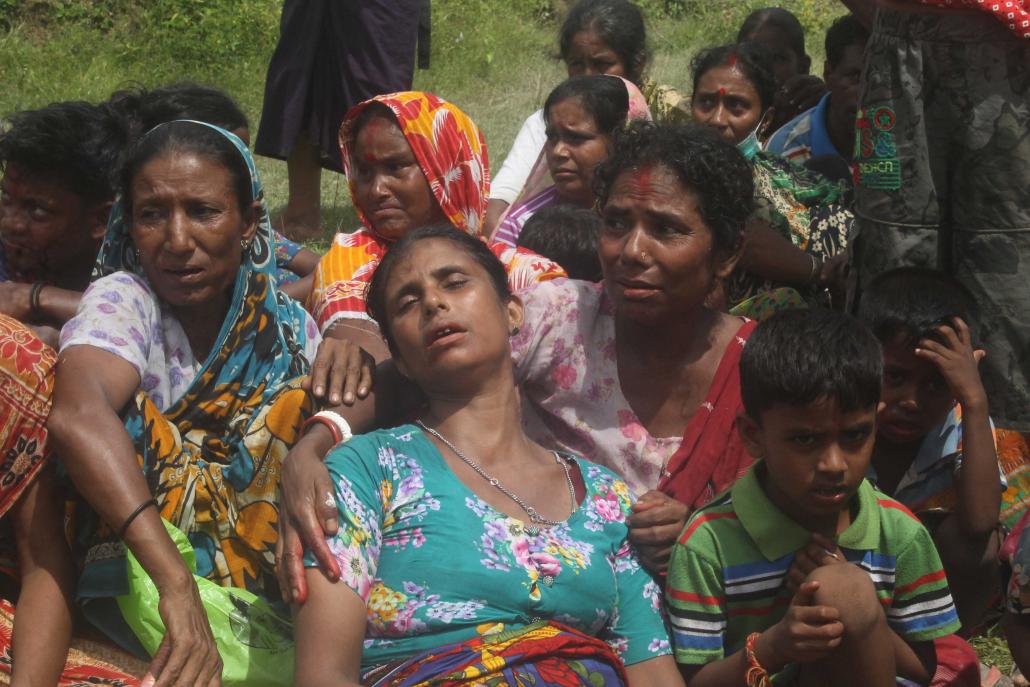 About 500 Muslims attacked the village’s Hindu population of about 100, before taking them to the jungle, where the men’s faces were covered, she said. Her version of events was supported by Bu Hla Swe, who is in charge of the Danyawadi Camp in Sittwe, for people displaced by the violence. The government said in its statement that about 300 Muslims launched the attacks.

When asked if the Hindus were able to defend themselves from the attackers, Mari Khal said that they did not have any weapons and that the attackers stole money and valuables from the villagers.

“The terrorists firstly pushed the men and stabbed and killed them,” she said. “Secondly, the women and children [were attacked]. The terrorists killed everyone; they had guns, swords and bombs. All of them had arms.”

She said that six women, including herself and her three daughters, were only spared after they promised to convert to Islam and serve as the attackers’ wives.

They spent three days in the jungle before being transferred to Bangladesh, she said. Once across the border, they were able to escape with the help of a Bangladeshi security officer and were transferred to Kutupalong, where other Hindu refugees are staying. 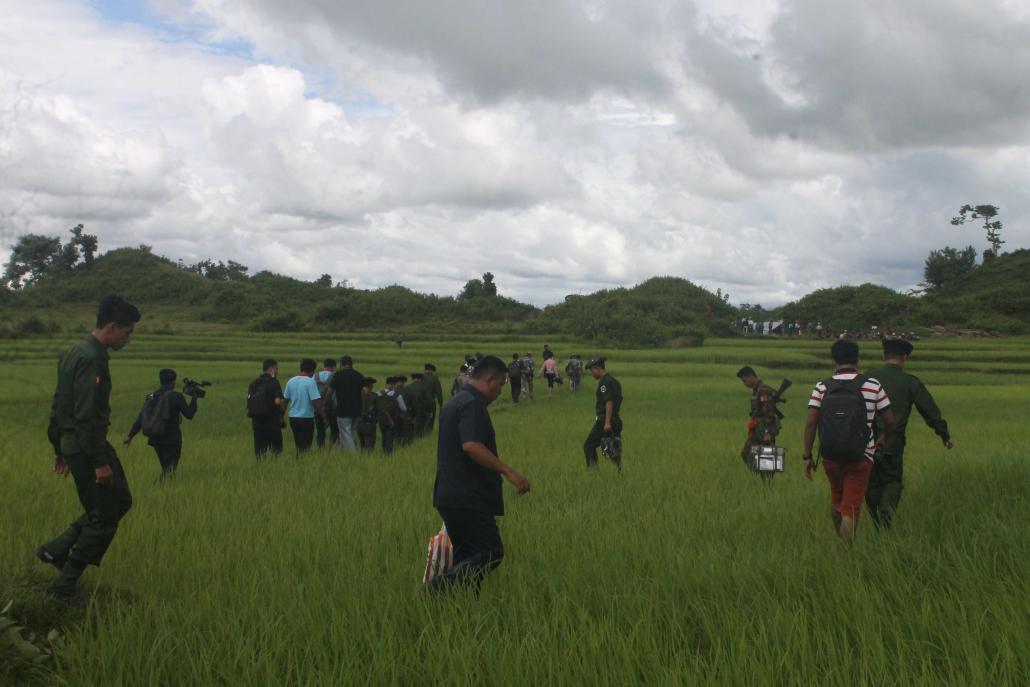 Religious leaders among the Hindu community in Sittwe and Maungdaw said they were informed about the attacks shortly after they took place but the authorities did not immediately respond to requests for help.

“There were some [authorities] interested in this tragedy, but sometimes the line was busy and we couldn’t make a phone call. With that indifference, more than 20 days went by [before action was taken],” said U Nimall, a Hindu who lives in Maungdaw’s No. 4 Ward.

He was one of the first people who contacted the women in Bangladesh. Frontier spoke to him at the scene of the killings, as part of a government-sponsored trip to the area in late September.  Almost a month after the incident, authorities began searching the area and on September 24 found the bodies of 28 people including 20 women.

Questions have been raised as to why the search for the bodies began almost a month after the incident was first reported to authorities, and why villagers were not protected. Yebawkya is a Hindu-majority village surrounded by about 10 villages that are Muslim-majority.

“After our police outpost was besieged on August 25, at about 9am, they [the attackers] committed terrorism and so we were unable to protect the villagers,” said U Okka Ko, a local police officer.

During the media trip, residents of the deceased could be seen and heard crying loudly.

“My father, mother, brother and daughter were killed,” shouted one women.

Authorities have said they will continue searching for those who are missing.

“With regards to this terrorist attack, we are systematically investigating what happened,” Major-General Aung Ye Win, director of the Tatmadaw’s Public Relations and Psychological Warfare Department, told reporters on the trip. “We are making medical inspections and are forming a team to re-investigate the claims.” 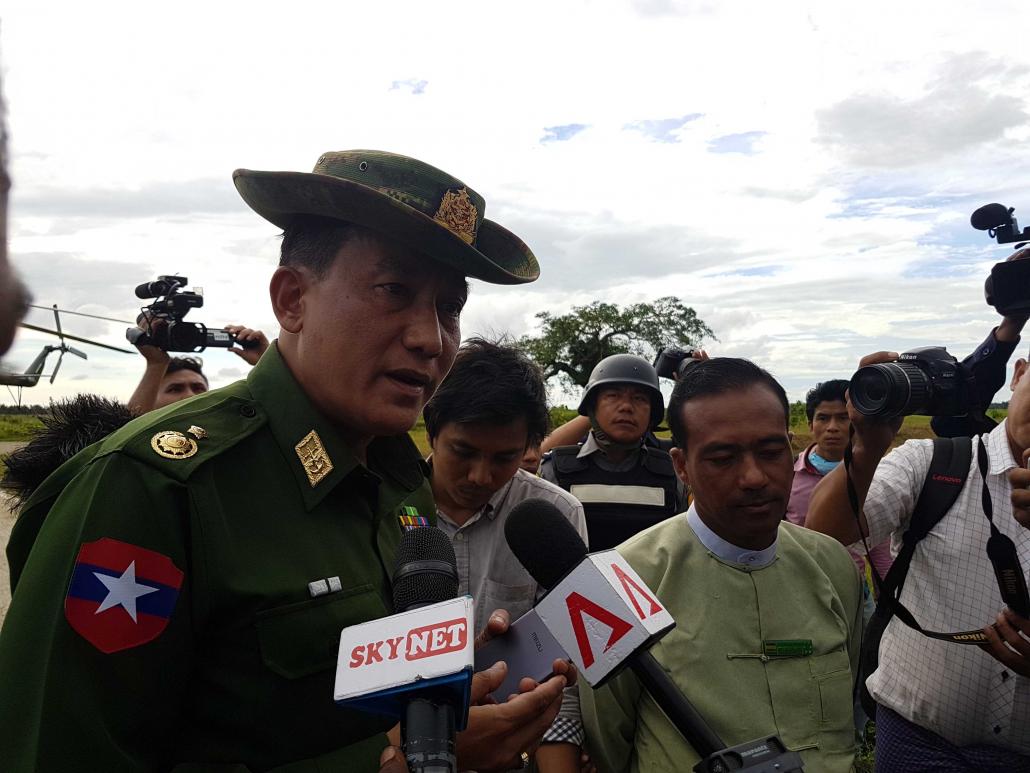 When asked if the government had enough evidence to prove that ARSA had launched the attacks, he responded: “At present you have heard what the relatives of the victims said. One thing I can say for sure is that they [Hindus] didn’t kill their own race. If we investigate this in the long-run, we will identify the culprits.”

Meanwhile, Myanmar’s government has handed a list of 600 names to the Bangladeshi authorities who they say were part of the August 25 attacks and has demanded that they be sent back to Myanmar, U Zaw Htay, the government’s spokesman told Frontier. Myanmar is also coordinating with Bangladesh to have six women and three children who witnessed the incident return to Myanmar.

But the Myanmar government’s handling of the situation has come in for criticism from international observers. On September 27, Human Rights Watch released a statement accusing the government of “playing politics with the dead” in relation to the incident.

The statement said that if ARSA’s responsibility is proven correct, that those responsible should be held to account, but that the government’s quick conclusion to assign blame for the attacks to ARSA “contrasts sharply with its own unwillingness to credibly investigate countless alleged crimes committed by its own forces” against the state’s Muslim population.