The closure of the border with China and many teashops in Myanmar’s biggest cities has sent prices crashing for green tea grown in northern Shan State.

The two-month tea harvest is about to end in the picturesque hills of northern Shan State, but the impact of the coronavirus pandemic on the market in Myanmar and China has dealt a cruel blow to tea growers from the Ta’ang ethnic group.

The growers, members of the Ta’ang ethnic group – often called Palaung in Burmese – are offering to sell green tea for between K6,000 and K7,000 a viss (1.63 kilograms), but buyers are scarce, said Mai Yan Naing, who has a tea plantation in Kyaukme Township.

Demand has slumped because of uncertainty over the pandemic, Yan Naing told Frontier.

Tough economic conditions have even resulted in some farmers going unpaid despite handing over their harvest to traders, he added. “Last year, buyers paid upfront and they bought as much as we could sell,” he said. “This year has been totally different.”

Green tea was fetching K12,000 last year and exports to China were realising about K20,000 a viss, said Mai Min Hein Kyaw from the Palaung Tea Growers and Sellers Association based in Namhsan Township.

Tea production is the main source of income for more than 600,000 Ta’ang, Frontier reported in August 2015. There’s a Burmese expression that if you want to drink good tea, climb a mountain in the Palaung region. The harvest season usually runs from March to the first week of May, and Ta’ang usually refer to it as a “golden” period.

That’s definitely not the case this year, however. The slump in demand has created uncertainty for growers, who wonder how long they can survive without the income they were expecting from the harvest.

Yan Naing said desperate growers had resorted to trading tea for rice, working for payment in food or borrowing money from relatives.

He predicted that people in the tea-growing area would be able to sustain themselves for another two or three months but after that there would be food shortages.

If shortages occurred, village authorities would discuss with township administration officials, civil society groups and Buddhist monks how to respond. 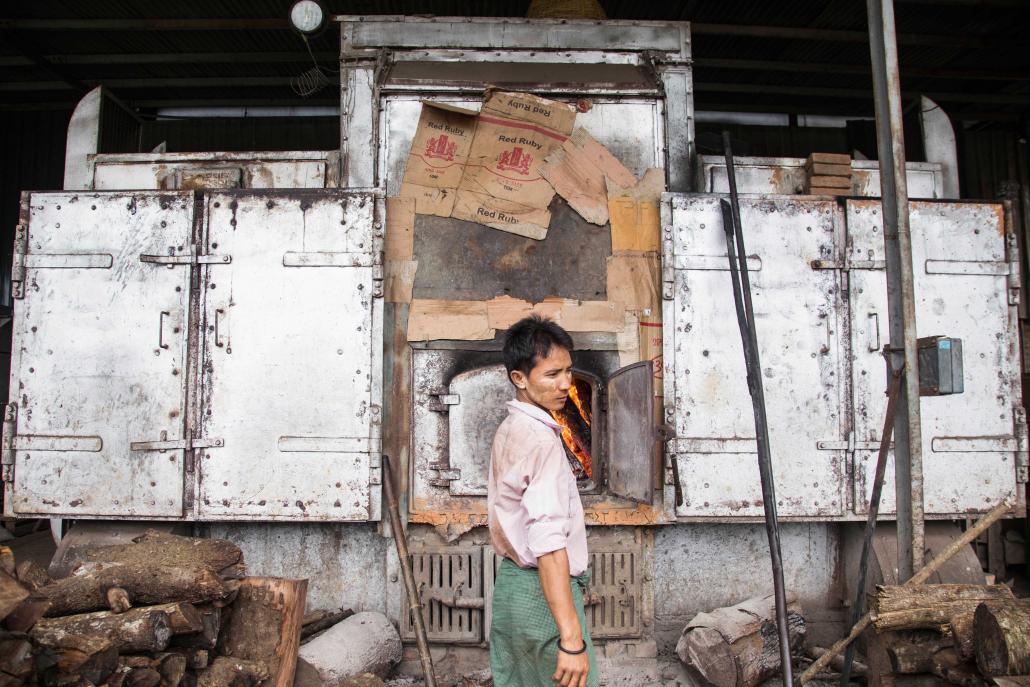 The Ta’ang grow tea in Mongtong and Namhsan townships, which comprise the Palaung Self-Administered Zone, and nearby Kyaukme and Namkham townships.

The tea price dropped after the first coronavirus cases in Myanmar were confirmed on March 23, but the market was already depressed by the effect on exports of China’s decision to close the border.

Min Hein Kyaw said the Palaung Tea Growers and Sellers Association had exported 50 tonnes to China in 2019 and ordered more than 70 tonnes of green tea from growers this year in anticipation of brisk sales continuing.

However, he said it wasn’t clear whether exports to China would be possible this October, when the group normally sells the tea harvested between March and May.

“We don’t know when we can next travel to China and it will take more time to find a new market,” he said.

As well as China, tea produced in the Ta’ang region is sold on the domestic market in Mandalay, Yangon and other cities, where sales have also been badly disrupted by precautions aimed at preventing the spread of COVID-19.

The decision last month to ban table service at teashops in Yangon, which led to many closing outright, had hurt sales, said Yan Naing.

“We have lost customers because of the closure of teashops and the advice to people to stay at home,” he said.

However, changes in plantation techniques have meant it is difficult to find tea bushes in the Ta’ang region that are more than two centuries old.

Traditionally, the Ta’ang have not cut back old tea bushes, but because of a labour shortage, growers began pruning the plants to make them shorter and the leaves easier to pick. This has resulted in smaller leaves and lower yields, said Yan Naing.

“Our old tea cultivation techniques have changed a lot,” he said.

A reason for the labour shortage is the fighting in the region between the Ta’ang National Liberation Army and the Tatmadaw, which has scared away migrant workers. The instability has resulted in some growers leaving the region to find work in China or Thailand or the jade mines at Hpakant in Kachin State. It has also led to a tea-growing boom in southern Shan, which is less affected by conflict.

Some former growers had earned good money as migrant workers abroad and had built comfortable houses on return to their communities, which had in turn encouraged other growers to walk away from their plantations and work elsewhere, Yan Naing said.

He said that restrictions on movement to combat COVID-19 had exacerbated this labour shortage.

In early April, the state government instructed residents of Shan not to travel except for funerals and healthcare. Travel for any other purpose required a letter of recommendation from the township COVID-19 Protection, Control and Treatment Committee. Other regions and states, including neighbouring Mandalay Region, through which most people in Myanmar access Shan, have also had travel restrictions in place for several weeks.