The process towards granting citizenship has been met with sharp resistance by communities in the restive state, and authorities are planning procedural amendments to encourage more people to apply.

THE GOVERNMENT is not planning to make wholesale changes to the controversial National Verification Card process, despite significant resistance from communities in Rakhine State.

Speaking at a press conference in Nay Pyi Taw on May 2, U Zaw Htay, deputy director general of the President’s Office, said no major changes would be made while the 1982 Citizenship Law remains in its current form. Only small procedural changes would be made in Rakhine State to try and encourage more people to apply, he said at the press conference, which was hosted by the Ministry of Labour, Immigration and Population to commemorate one year since the new government took office.

Figures from the ministry show that only 35,942 people have applied for and been granted an NVC nationwide since it was implemented by the U Thein Sein administration in June 2015. Although Rakhine State is estimated to have more than 1 million stateless residents, only 7,548 people have received an NVC there.

Being granted an NVC does not guarantee citizenship, but holders of the cards can apply for citizenship through a formal process at a later date.

U Myint Khaing, permanent secretary of the ministry, said the low buy-in for the process in Rakhine State was because people did not have enough evidence to show they had lived in the country for the requisite period of time to qualify for an NVC.

“They won’t register if they know they are foreigners. Even if they did, they would be removed at township level. Most of the people who have registered have strong evidence showing they have been present for a long time in Myanmar, in accordance with the 1982 Citizenship Law,” he said on May 2. 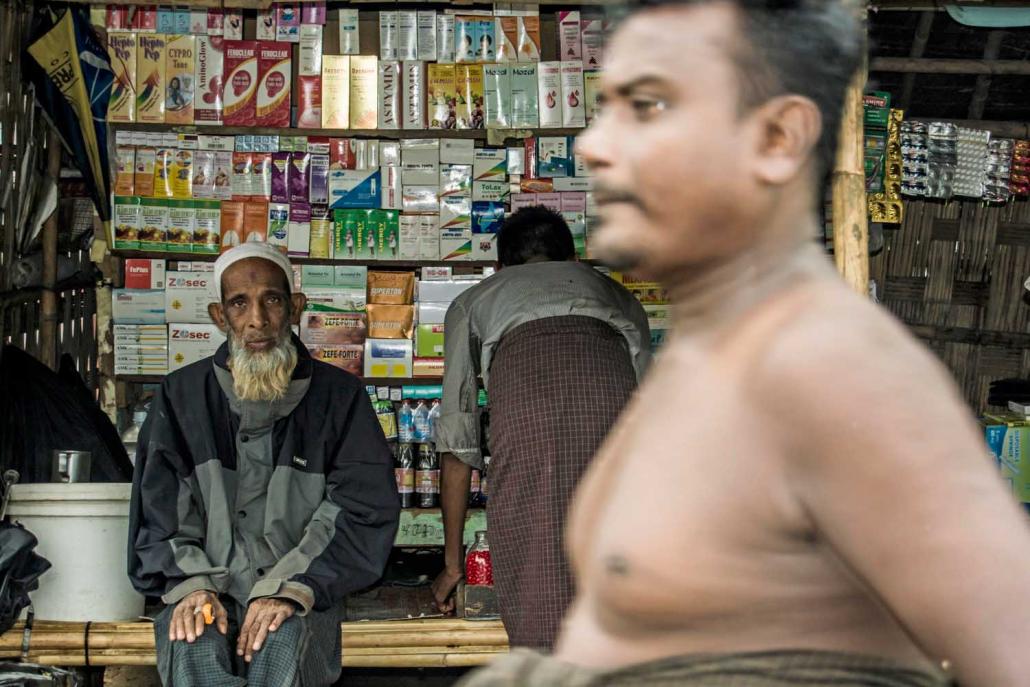 A Muslim man waits at a pharmacy in a Rohingya IDP camp on the outskirts of Sittwe. (Maro Verli | Frontier)

But speaking at a separate press conference a week earlier, on April 26, Zaw Htay said the government is considering making small changes to the process in Rakhine State to encourage people to apply.

Currently any person wanting to register for an NVC must travel to their township General Administration Department office to apply, but Zaw Htay said that in Rakhine a field team led by immigration minister U Thein Swe would travel to villages to discuss the process and help people to register.

“We have reviewed the process of people going to the township office [to register],” said Zaw Htay. “According to the instructions of the State Counsellor [Daw Aung San Suu Kyi], a field work team will be formed to implement the changes.

“We are trying to make sure they get citizen’s rights,” said Zaw Htay. “But there are some who do not want to take part in the NVC. There are organisations that are making them not accept the NVC,” he said, without elaborating on which groups he was referring to.

The NVC process has been met with resistance by members of both Rakhine and Muslim communities – many who identify as Rohingya – in the restive state. Under a perceived threat of “Muslim invasion” many Rakhine are suspicious of a process that could see citizenship granted to people they view as illegal immigrants from Bangladesh.

Among the state’s Muslim population, about a million of whom are Rohingya and denied citizenship under the 1982 law, many are sceptical of the NVC because previous citizenship scrutiny processes had failed to deliver real benefits.

“We do not accept this card,” a Rohingya villager in Pwint Phyu Chaung village, Maungdaw Township, told Frontier during a government-sponsored trip to the area in April, referring to the NVC. “We cannot travel with this card and we don’t accept it, as told by our elders. We don’t accept it because of concerns we will be regarded as coming from Bangladesh. There is Burmese ethnicity and Rakhine ethnicity, we want the same thing.”

The NVCs, which are blue in colour, differ from previous identity cards because they do not list the holder’s ethnicity or religious affiliation, and have no limit of validity. They replace the verification documents known as green cards that were valid for two years and issued only to those willing to be described as “Bengali”.

In 1989, the junta ordered residents to surrender their National Registration Cards. These were supposed to be replaced with Citizenship Scrutiny Cards (known as “pink cards”). While this happened elsewhere in the country, many Muslims in Rakhine who surrendered their NRC did not receive pink cards in return.

In 1995, the military government began issuing Temporary Registration Cards, or “white cards”, to those who had surrendered their NRCs. White card holders had the right to vote in the 2008 constitution referendum, the 2010 election and the 2012 by-elections.

Thein Sein’s government launched a pilot project in June 2014 under which citizenship was granted to about 200 Muslims – including Rohingya, who had to identify as “Bengalil” to get citizenship, and Kaman, one of the nation’s 135 recognised ethnic groups – but it was quickly suspended because of protests from the Rakhine community.

In late 2014, controversy erupted over a bill that would have allowed those holding a white card to vote in a planned referendum on constitutional reform. In February 2015, Thein Sein declared white cards invalid from the end of March, a decision which disenfranchised about 900,000 Rohingya.