YANGON — Freedom of expression under the National League for Democracy-led government is worsening despite initial hopes of improvement, youth activist group Athan said Thursday, in a mid-term report that documents a litany of charges filed in the past two-and-a-half years under laws that violate freedom of speech.

Initial signs when the government took office in April 2016 were promising, the report says: students who were arrested and prosecuted the previous year for marching from Mandalay to Yangon in protest against the National Education Law were freed and pardons were granted to imprisoned activists, workers and farmers.

But euphoria surrounding the amnesty soon dwindled and the government and parliament began to “intentionally and recklessly” restrict freedom of expression using an array of oppressive laws, according to Athan. Some of these laws date from the colonial era but a majority have been enacted or used for the first time to restrict freedom of expression only in recent years.

Mid-term Report on Freedom of Expression uses a range of methodologies to document violations of freedom of expression in the 30-month period from April 1, 2016 to September 30, 2018. It shows that the same few laws have been used repeatedly against journalists, activists and citizens.

“If the government cannot guarantee peoples’ freedom of expression, I doubt that other human rights will be protected by them,” said Athan’s founder Ko Maung Saungkha at the report’s launch in Yangon on Thursday. “We ask the government to be patient and listen to what the people have to say, not just file a case against them. That includes the media as well.”

The report is split into several sections, the largest of which documents violations of free expression by government. Parliament’s failure to abolish Article 66(d) of the October 2013 Telecommunications Law is a conspicuous example: the law was first used to target free speech in the 2015 election campaigns and Athan has since documented 150 cases, of which 139 were filed under the current government.

Under intense pressure from civil society, parliament made a superficial amendment to the law in August 2017, reducing the number of grounds to file a complaint from seven to four (extorting, defaming, disturbing or threatening any person), reducing the maximum prison term and banning third-party plaintiffs from filing complaints without legal power. But Athan said 48 cases have been filed since the amendment was made.

Not only has the government failed to lift restrictions on free speech, such as censorship of the public performance of satirical verses known as thangyat, it has passed a new law that has been used to punish criticism of public officials. The Law Protecting the Privacy and Security of Citizens was passed on March 8, 2017, despite concerns over its provisions and definitions that are seen as vague and inconsistent. Article 8(f) is similar to Section 500 of the colonial-era Penal Code and carries a sentence of three years’ imprisonment for defamation. The difference is that a witness or third party cannot make a complaint under Section 500 of the Penal Code, whereas there is no clear provision in the 2017 law. 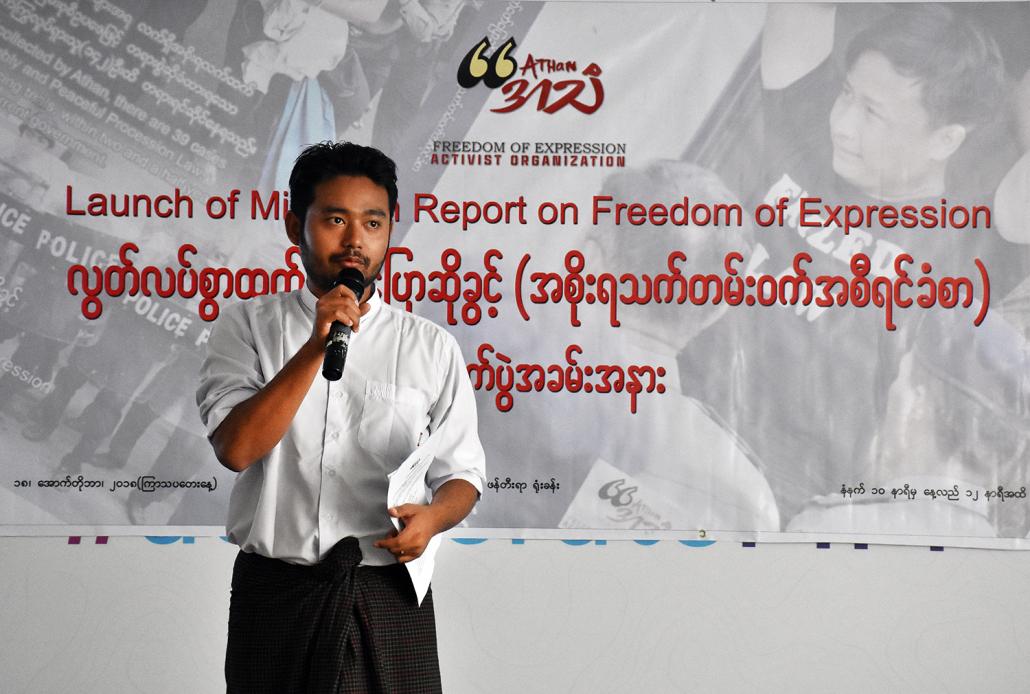 Athan documents unprecedented use of sections 124(a) and 505(c) of the Penal Code to file charges against protesters and points to another concerning development: lower house lawmaker Daw Yin Min Hlaing (NLD, Gangaw) proposed in November 2017 that the government should monitor social media. Her proposal was approved and authorities plan to form a team that will monitor online posts.

A smaller section of the report is dedicated to violations by the Tatmadaw, which Athan concludes has not altered its “bigoted intolerance against freedom of expression”. The group records 14 cases during the current government’s term in which the Tatmadaw sued individuals who criticized the military or its leaders. In three cases the targets of legal action were organisers of anti-war plays.

Regarding freedom of the press, data collected by Athan shows that one journalist (Ko Soe Mo Tun, a Monywa-based reporter for Eleven Media) was murdered and 43 journalists have been charged under 25 lawsuits. Of these, 15 lawsuits were filed by government personnel, three were filed by the military and seven by civilians. In 19 of the lawsuits, the Telecommunications Law was used to file charges.

Reporters have also received death threats and two journalists have been fired in cases that Athan links to freedom of expression. Government restrictions on free speech also prompted Yangon-based MNTV to terminate its contract with BBC Burmese in September 2017 and caused Radio Free Asia to end television broadcasts on the Democratic Voice of Burma network in June 2018.

The report finds that with 39 prosecutions under the Peaceful Assembly and Peaceful Procession law during the current government’s term and 142 activists facing lawsuits, the right to peaceful assembly and peaceful procession is also “questionable”.

Since the law was enacted in December 2011 it has been heavily criticized by human rights activists. Amendments in June 2014 and October 2016 removed some restrictions, but the law retains several provisions that limit freedom of assembly. The upper house submitted a further amendment bill to the law in February 2018 that Athan calls “more complicated, draconian and problematic than the version before the amendments”.

“Government leaders and public officials should listen to the people’s voices, particularly when it involves legitimate comments and criticism guaranteeing the practice of rights to freedom of expression and press freedom,” Athan said. The group recommends that parliament repeals and amends “draconian laws that restrict free expression” and engages civil society organisations when drafting, enacting and amending regulations and laws.

Athan also calls on members of parliament and political leaders to withdraw charges and to free individuals in jail charged under laws that violate freedom of speech. It calls on the Tatmadaw to guarantee and respect the right to freedom of expression and opinion, and the right to know and to access information. The judiciary and courts, the groups said, should uphold the rule of law and ensure the independence of the judicial system.

“[The] News Media Council should help ensure that the online and cyberspace are free, open, accessible, and safe … to create a people and rights-oriented internet policy and governance,” it said. 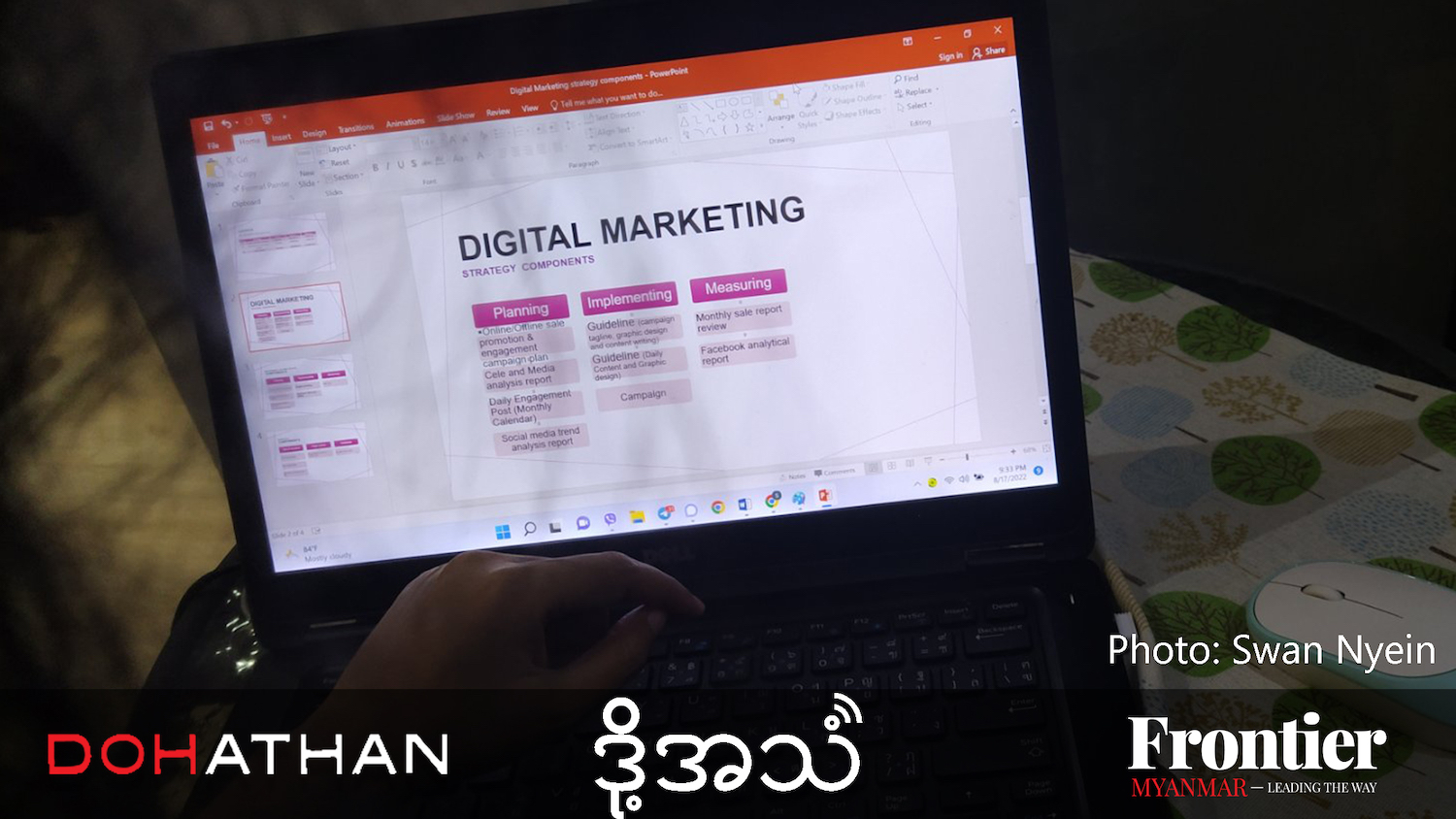