The United Kingdom is lending a hand on a project that will assess the condition of the state-of-the-art sewerage system it built in Rangoon during the colonial era.

WHEN BRITISH civil engineers installed what was then a state-of-the-art sewerage system in downtown Yangon in 1889 it was designed to serve a population of about 40,000. Nearly 130 years later, British engineers are back in Yangon to help with plans to upgrade a system that serves 350,000 people in the six downtown townships.

The British government’s overseas aid agency, the Department for International Development, has funded a team of specialist engineers and consultants to work on the project with the Yangon City Development Committee’s Engineer Department (Water and Sanitation).

An assessment of the condition of the badly overloaded system is due in June and will help the YCDC and the regional government to decide whether it will be repaired or replaced.

British ambassador Mr Andrew Patrick, said Yangon Region Chief Minister U Phyo Min Thein had sought assistance for the project during a visit to London in August 2016, which included a meeting with a senior DFID official.

Patrick said one of the reasons Britain had decided to support the project was because the sewerage system was among the former capital’s heritage infrastructure from the colonial period.

He said a similar system continued to serve the Westminster precinct in London, which includes the British Parliament. 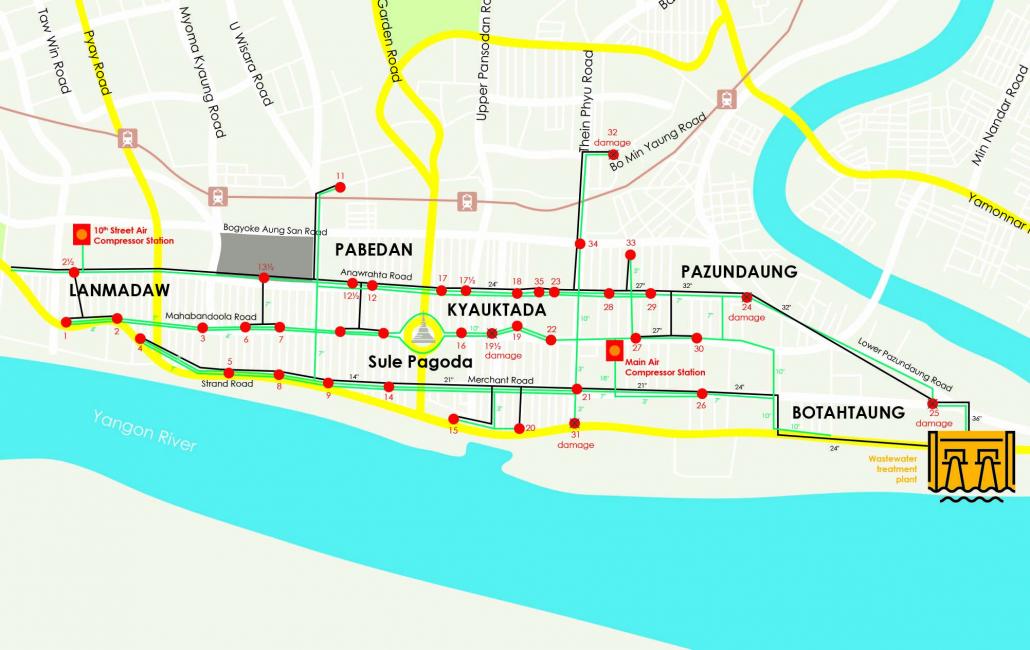 Yangon, founded as Dagon, was largely an underdeveloped backwater until the British conquered the whole of Lower Burma in the Second Anglo-Burmese War, which ended in 1852, and made the city its capital.

After its installation, the Rangoon sewerage system was regarded as one of the most advanced in the world, along with those serving the Egyptian capital, Cairo, and Karachi, then part of British colonial India and now Pakistan’s biggest city.

The former capital’s sewerage system was designed and installed in 1889 by a British civil engineer, Mr Octavus Deacon Clark. It relies on a network of pneumatic and air compression stations to pump sewage to a treatment facility in Botahtaung Township at the eastern end of the downtown area near the confluence of the Yangon River and Pazundaung Creek. Treated waste from the only facility of its kind in Myanmar is pumped into the river.

The British team is headed by IMC Worldwide, a London-based development consultancy with expertise in infrastructure projects. Together with YCDC engineers, other team members are UK-based water and sewage treatment company SATEC (which incorporates Hughes and Lancaster, the original makers of the sewerage system), Myanmar engineers with Netherlands-based engineering consultancy Royal Haskoning DHV, and British civil engineering firm, BAM Nuttall.

The sewerage system assessment was a preliminary project for a proposed major expansion in Yangon, said U Thein Min, deputy chief engineer of the YCDC’s Engineering Department (Water and Sanitation).

“Of the 33 townships under the YCDC, only the six in the downtown area have a sewerage system. The remaining areas of Yangon Region will be split into five zones in which sewerage systems will be installed with funding from [Japan’s international aid agency] JICA before 2040; that’s our master plan,” he told Frontier. 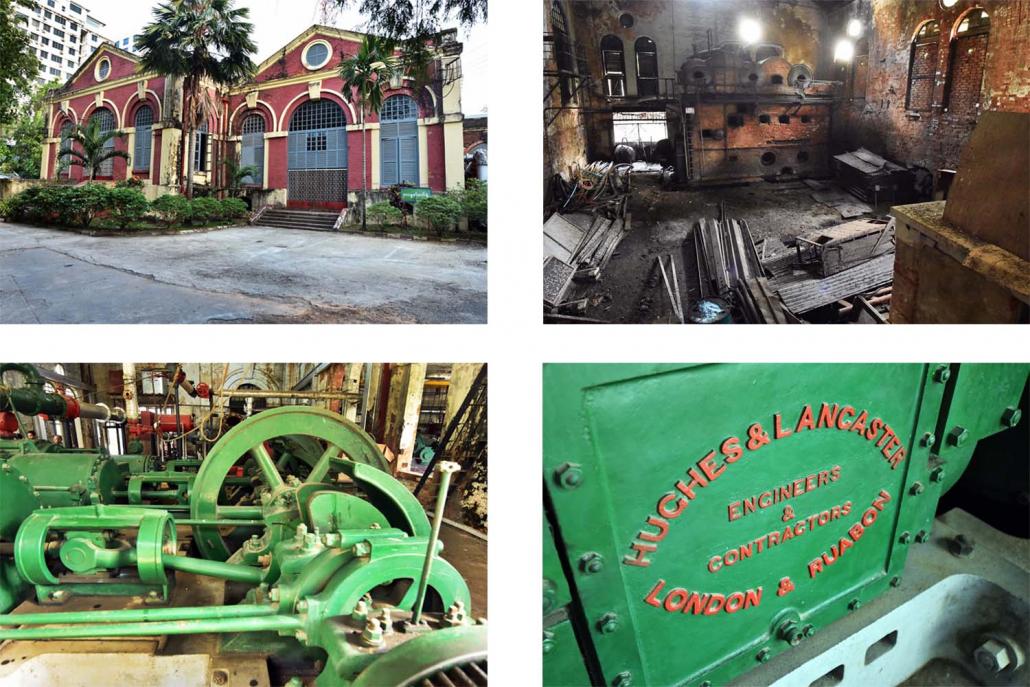 In 2014, the YCDC teamed up with JICA on a survey to establish how to improve the water supply, sewerage and drainage system in Yangon. The study estimated that the area under YCDC control would reach 8.52 million by 2040, up from 5.14 million in 2011.

It also recommended dividing the city’s sewerage systems into 14 zones, incorporating the city’s centre, as well as its north, south, east and west boundaries.

Until such upgrades take place, many of Yangon’s residents will continue to rely on trucks to collect and dispose of sewage stored in septic tanks built on their properties. 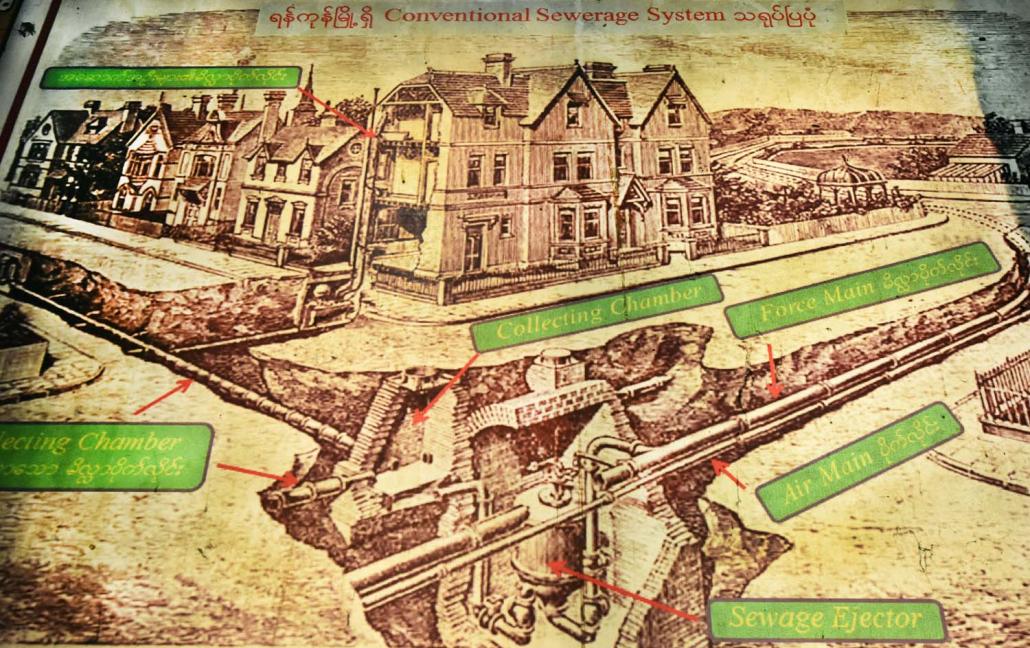 This includes trucks operated by YCDC, which charge residents about K25,000 for each call-out, or private trucks that typically cost about K100,000.

If the septic tanks overflow, the sewage can “damage the people’s health and the environment,” Thein Min said.

The installation of a sewerage system to cover the urban area would be a big improvement, he said.

Daw San San, 56, lives on a rented property in South Dagon Township. She said the septic tank on her property is of a poor quality, and said that if she owned the property she would upgrade it.

“I would like the YCDC to come to the houses and advise whether a better quality tank is required, as well as to provide guidelines to people,” she told Frontier.

TOP PHOTO: Yangon’s sewerage system was state of the art when installed in 1889 but designed to serve a population of 40,000. (Steve Tickner | Frontier)

More than two months after they were introduced, residents and officials in Yangon are increasingly ignoring stay-at-home orders, yet the government insists infection rates need to fall before they can be rolled back.
BY Aung Phay Kyi Soe & Thomas Kean