For Yangon’s squatters, a better life still out of reach

The Yangon Region government made resolving the squatter problem a priority but low-cost housing projects are scarce and remain too expensive for many.

ON THE outskirts of Yangon, Daw San San Win proudly welcomed the Frontier team into her small apartment: Room 402 in Building No 4 at the Mahabandoola low-cost housing project, in South Dagon Township’s industrial zone.

San San Win previously lived with her teenage daughter in a squatting community in Dagon Seikkan Township. But in February 2016, she applied to a government scheme that aims to provide low-cost housing to squatters through a lottery system. Her application for an apartment at Mahabandoola was successful and the pair moved into their new home in April.

“I never thought we would live in an apartment; it’s so different from how we used to live before,” she told Frontier. “Our last home was a hut and we never felt safe because it didn’t have a proper door, just a tarpaulin cover.”

But San San Win is one of just a handful of squatters who have been resettled by the government in permanent housing.

The Department of Urban and Housing Development estimates that Yangon has more than 440,000 squatters living in 110,000 households, mostly on the city’s outskirts in townships such as Dagon Seikkan and Hlaing Tharyar. 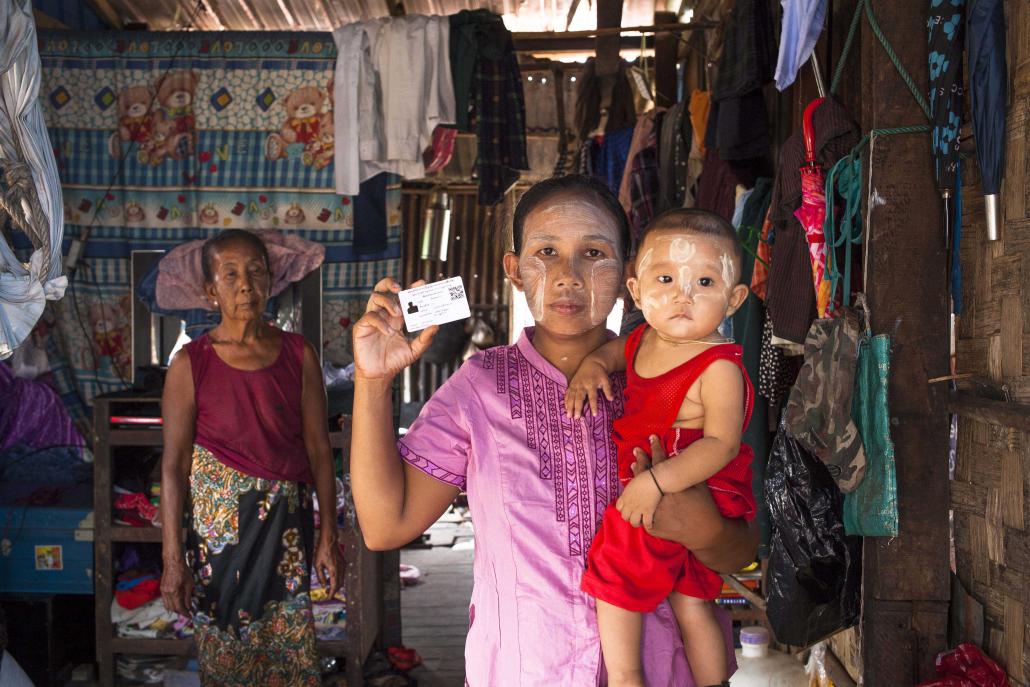 Daw Thin Thin holds a smart card issued by the Yangon Region government to ‘real squatters’. She lives in a squatter community in Dagon Seikkan’s No 60 ward. (Theint Mon Soe aka J | Frontier)

As the country’s largest city and commercial capital, Yangon has for years had to deal with high inward migration. Demand for housing has typically outstripped supply. With urbanisation expected to increase in the years ahead, the housing challenge is unlikely to go away. Successive governments have introduced measures to deal with the housing shortage, such as establishing satellite towns, but these have brought mixed results.

Shortly after taking office in March 2016, Yangon Region Chief Minister U Phyo Min Thein said he would address the issue by conducting a survey of the city’s squatter community. Those deemed to be “real squatters” would be given a smart card and eventually resettled, but progress on the plan has been slow.

Frontier sought comment from the regional government on the status of the plan. Minister for Finance and Planning U Myint Thaung responded that he “didn’t know the details”. Other ministers could not be reached for comment.

In the absence of official action, some are coming up with their own solutions to the problem.

The money is used to provide infrastructure, including roads and water.

“We provide the road and water ourselves, not from any government support,” Nge Lay said, adding that people come to live in the area as it is easier than renting an apartment.

Nge Lay moved to the ward from Thongwa Township, in rural Yangon Region, in 1994, when he said there were hardly any squatters in the area.

Frontier spoke to more than 10 squatters living in the community, who said they had migrated mainly from lower Myanmar, including Yangon, Bago and Ayeyarwady regions.

Resident U Tun Kyaing came to 60 ward in 2011 from Yangon’s South Okkalapa Township. He said his income as a construction worker was erratic and only enough to cover basic living expenses for his family.

“We have no money to buy land,” he said. “I earn money K7,000 to K10,000 a day, but at the moment our work has stopped for the monsoon. Many sites have also been ordered to stop work by the regional government. I just get odd jobs every now and then and it’s diffciult to survive.”

Government housing: out of reach

In 2011, the Department of Urban Housing and Development began a 20-year plan aimed at building new apartments across the city to fulfill the increased demand. The project includes low-, middle- and high-standard housing. However, the majority of the rooms are expensive; low- and middle-cost housing comprises just 20 percent of the planned apartments.

DUHD plans to build 20 percent of the rooms, while private companies will construct the rest, said deputy director U Tin Myint. He added that the apartments would be sold in instalments and targeted at those with monthly incomes of between K100,000 and K300,000.

The project has seen 75,000 new apartments being built, but only a small amount are considered low cost, he said. 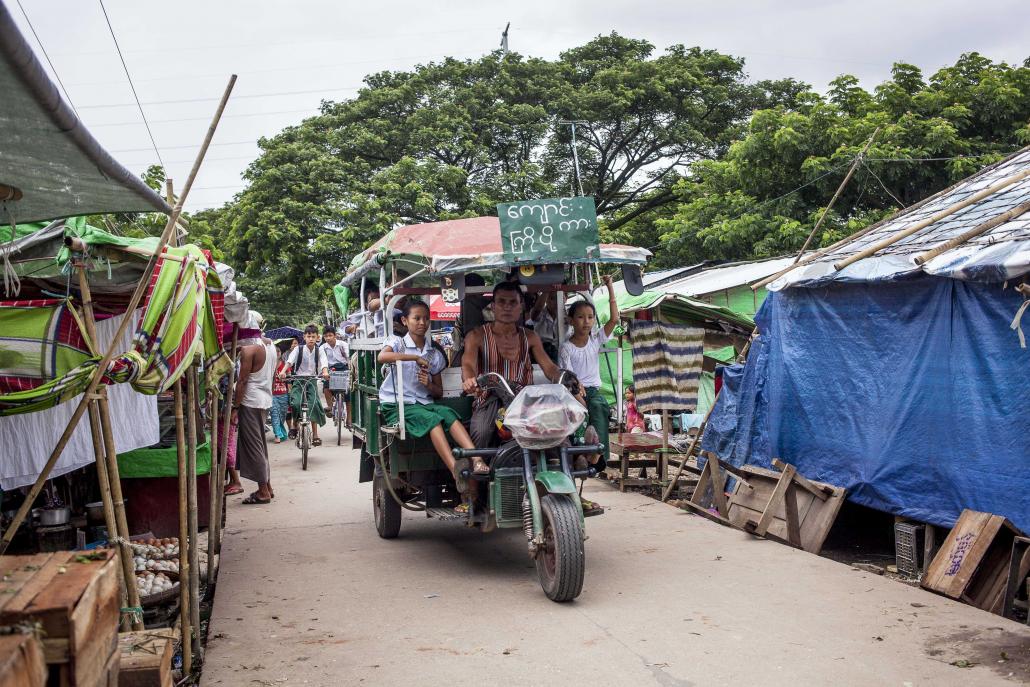 Residents of the Dagon Seikkan community pay a one-off fee of K30,000 to K50,000, which is used to provide basic services. (Theint Mon Soe aka J | Frontier)

The price of the low cost houses is between K8.5 million and K20 million and buyers are expected to pay a 30 percent deposit and pay back cost within 10 years to the Construction and Housing Development Bank.

“It is our plan for those who do not have houses,” said Tin Myint. “I think our targeted income is very low and will help those who do not own homes, because if they are squatting in a place then they will need to pay money for that. Now they can use that money to buy a low-cost house.”

Even if there were enough of these low-cost apartments available, many of those living in squatter facilities said the prices would still be out of reach.

“We know about the plan, but the most difficult thing for us is providing the deposit,” said U Thein Han, who is originally from Pyay but now lives in the squatter community in Dagon Seikkan. “More important to us is having land, because we never spend any time in the room. If they allow us to buy land, we would prefer that because we can move more freely.”