MUDON — Thousands of devotees flocked to a mock palace of kaleidoscopic colours in Myanmar this week to dance, sing and pay their final respects at the lavish cremation of a local celebrity monk.

Abbot Kay Lar Tha was just 48 when he died last year from leukaemia in Mudon village, in the country’s southeast.

It took his faithful followers nine months to raise the US$80,000 needed for the extravagant cremation — a fortune in one of Asia’s poorest countries, where a third of people live in poverty.

Pilgrims dressed up in their finest clothes to pay homage at a palace constructed for the occasion out of wood and bamboo, costing around $33,000.

“This is the death of a monk who is a hero in our religion and we are all inconsolable about losing him,” the 50-year-old shouted above the music in the grounds of Yan Aung Wa Bawzana monastery.

Buddhist leaders wield considerable influence in Myanmar society, providing education for children, weighing in on local disputes and helping raise money for roads and other infrastructure.

For seven days, crowds flocked up the stairs of the makeshift palace to catch a glimpse of the abbot’s body lying in an open casket, carried by a fluorescent dragon-shaped boat.

The body itself lay swathed in scarlet robes with elaborate embroidery, his face covered with a mask. 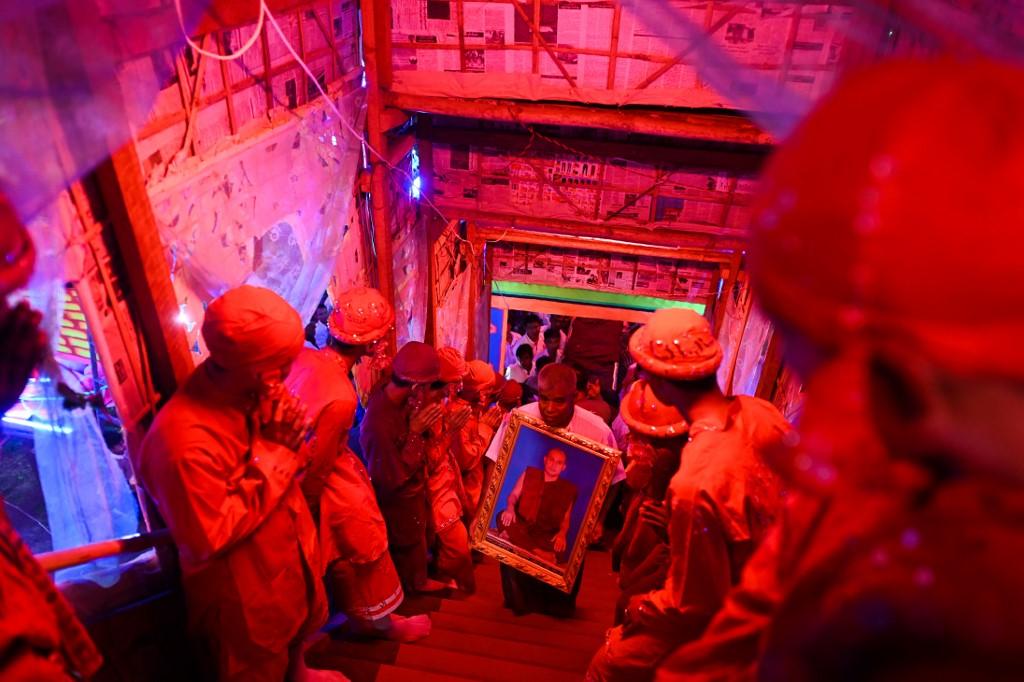 Devotees wait to carry the coffin of abbot Kay Lar Tha during his funeral. (AFP)

Down below, lines of women in vivid pink costumes and white shawls danced while men in red swayed back and forth, holding aloft the monk’s treasured possessions in an ornate shrine.

Ko Mon Chan, 21, said he and his fellow dancers had been rehearsing for weeks and were proud to take part in the ceremony.

“This is a once-in-a-lifetime event,” he said, beaming.

Such extravagant funerals for Buddhist-majority Myanmar are rare, though traditions and customs vary widely across the country.

For example, the funeral for a revered monk in nearby Karen State in November was even more exorbitant, coming in at a reported cost of more than $600,000.

Devotees see the outlay as a reflection of the monk’s prestige.

But others reject such opulence.

“It’s a total waste of money,” one Mudon local told AFP angrily, not wanting to give his name. “It’s completely unnecessary.”

Festivities reached their climax Sunday as devotees clamoured to touch the abbot’s casket on its journey to the cremation room of his former monastery before it was set alight.

As smoke rose into the sky, fireworks exploded overhead and pilgrims released hundreds of twinkling Chinese lanterns before dancing late into the night.