There’s intense competition among top-selling Chinese handset makers for a bigger slice of the Myanmar market, but don’t even think about asking them for sales figures.

THE HUGE increase in mobile phone use since the telecommunications sector opened to competition in 2014 has seen an influx of Chinese smartphone makers jostling for market share.

They include Guangdong-based Meizu, which opened an office in Yangon in early 2016, a few years after some of its main competitors from the People’s Republic.

Meizu hopes to have cornered at least 10 percent of the market in two years, its spokesman in Myanmar, Mr Xiao Li, told Frontier on September 27.

Asked why Meizu had entered the Myanmar market, Mr Xiao highlighted its potential.

“We think Myanmar is an emerging market because more and more people are using smartphones,” he said.

Sales of Chinese brand smartphones have surged in a booming market since Norway’s Telenor and Qatar’s Ooredoo ended the monopoly held by state-owned Myanma Posts and Telecommunications three years ago.

Government data released in July show how competition has supported the impressive growth in the market for internet-capable smart phones.

The figures showed that to the end of May, the mobile phone penetration rate had soared from about seven percent in 2011-12 to nearly 90 percent, and the number of internet users had risen from two million to more than 39 million.

Government figures reported in June put the number of active SIM card sales at 50.82 million, slightly less than the nation’s population. It’s estimated that up to 80 percent of SIM card sales are for smartphones. Since 2011-12, more than 87 million SIM cards have been distributed in total, although many are no longer active.

Research firm IDC estimates that Chinese manufacturers accounted for about 60 percent of the approximately 9.8 million smartphones shipped to Myanmar in 2016.

Analyst Mr Nutchanon Boonsorn, who covers Myanmar for IDC, said Chinese brands had been “well received by local budget conscious end-users” and he expected them to continue their expansion activities.

“Similar to other Southeast Asian countries, Chinese vendors have been disrupting the market with their range of devices that come with good price to specs ratio,” he said.

IDC rates South Korea’s Samsung as the top brand overall, largely based on the success of its budget range. Several Chinese brands are close behind and collectively have almost two-thirds of the market, but it’s hard to say which brand has the biggest market share.

A survey Frontier conducted last month of about 30 retailers throughout the country suggested that Xiaomi has the lion’s share of the market, followed by OPPO and Vivo. IDC also puts Xiaomi on top, followed by Huawei, vivo and OPPO.

Huawei, one of the first Chinese brands on the market, was top seller until early 2016 when it lost market share to other brands, retailers said.

Ma Dudich, a spokesperson for the business development department at Mobile Mother shop in Mandalay, said the arrival of Xiaomi had shaken up the market.

“This brand is very popular in Myanmar, mostly because of its camera quality. In previous years, Huawei was the top brand,” she said.

One of the reasons why it is difficult to say which Chinese brand is the top seller is fierce competition and a reluctance to provide information, said Ko Tun Tun, a senior reporter with Internet Journal.

“The companies don’t answer if you ask them how many handsets they are selling in Myanmar,” Tun Tun said.

Frontier repeatedly asked Xiaomi for sales figures but it said the information was confidential and could not be given over the telephone. It did not respond to a request for an interview.

Competition in the market is clearly evident along downtown Yangon’s busy Anawrahta and Pansodan roads, where dozens of handset and mobile phone accessory shops have replaced other retail outlets and restaurants.

The main reason for the popularity of Chinese hand phones in Myanmar is their affordable price. Most buyers spend between K150,000 and K300,000 on a smartphone, Frontier learned in telephone interviews it conducted last month with about 30 mobile phone shops. IDC puts the preferred price range at US$50 to $150, or K68,000 to K205,000.

Smartphones made by Samsung typically cost between 50 and 100 percent more than a Chinese model with the same specifications.

Meizu’s M5S model costs about K199,000 and a smartphone with similar features and capacity made in South Korea or Japan costs about 50 percent more.

Similarly, the Meizu M5C and Samsung J3 Pro are considered equivalent in terms of features, but cost K129,000 and K240,000, respectively.

Another reason for the popularity of China-made mobile phones is consumer choice. Two of the country’s biggest mobile phone chains, KMD and Unique IT and Mobile Center, stock about 135 models, of which nearly 80 percent are Chinese brands.

“If a Chinese model has a good camera and fingerprint security and is priced at K150,000, it sells the best,” said Ko Aung Myat Thu, a supervisor at Super Mobile, a well-known retailer in Mandalay.

“Chinese smartphones are cheap but the quality is great,” said Ma Ye Lin Lin Than, who uses a Chinese-made Xiaomi Mi Max. “You have to consider our disposable income. For the typical income of a Myanmar person, a Chinese brand is most suitable.”

Nearly 80 percent of smartphone users in Myanmar take camera quality into account when making a purchase, according to a survey released last year by Nielsen MMRD, a research company.

Some smartphone makers, such as Vivo and OPPO, have focused their advertising campaigns almost entirely on the quality of the cameras installed in their models.

Guangdong-headquartered Vivo launched its V7+ model in Myanmar last month with an event in Yangon that highlighted what the company said is world-first camera technology. At K429,000, the V7+ is at the higher end of the market for a Chinese-made phone.

Nutchanon from IDC said that in Myanmar handsets are still mostly purchased from physical retailers, so promotions and marketing activities are also factors that have a big impact on purchase decisions.

“Incentivised sales personnel manning the store are also among the main key drivers to smartphone purchases,” he said.

One reason that manufacturers may be reluctant to provide sales figures is tax.

Official figures show that between 2011-12 and 2016-17 import licences were issued for more than 17.8 million mobile phones.

However, Deputy Minister of Finance and Revenue, U Maung Maung Win, told the Pyithu Hluttaw on May 25 that tax was paid on just 1.6 million devices during this period. The total value of legal imports was US$50.4 million – an average of just $31 per unit.

This is clearly just a fraction of the total market. The deputy minister said the huge gap in the figures was due to illegal imports as well as some companies not importing all the phones for which they had approval. 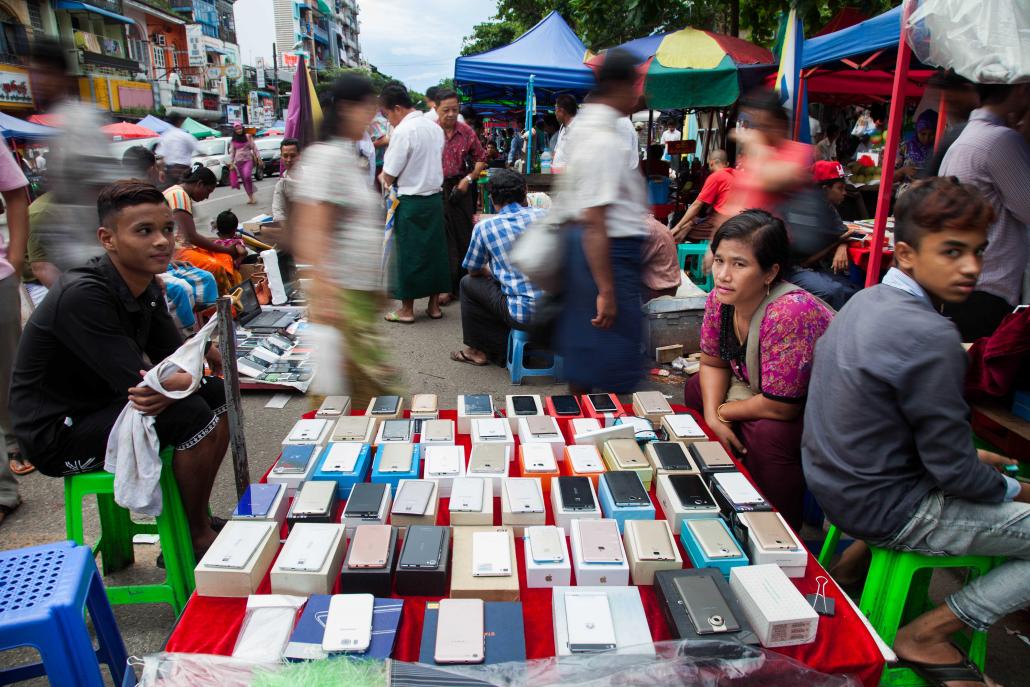 Handsets on sale beside the road in downtown Yangon. (Theint Mon Soe aka J | Frontier)

Rampant smuggling is costing the government dearly in lost tax revenue, but legal imports are being undervalued to minimise tax.

However, Customs officials seem to be making little progress in stemming the flow of illegally imported phones.

Customs Department figures show that illegally imported mobile phones and accessories worth K13.5 million were seized between April 1 and August 31 this year.

There are indications that sales in the smartphone market may be slowing following what IDC describes as the “hypergrowth” of recent years.

While the research company reported a 26 percent year-on-year increase in smartphone shipments in the third quarter of 2016, with 2.5 million units shipped in total, it expects growth to moderate to 9 percent in 2017. This is still higher than the Southeast Asia average of 6 percent, but well down on recent years.

The slowdown is partly due to the fact many urban residents already own a smartphone. Sales in urban areas are now driven by users replacing and upgrading devices, while in rural areas there are still a significant amount of first-time buyers, Nutchanon said.

Some external factors may inhibit growth even further, he said. “Civil unrest and various other macroeconomic factors [are] not likely to improve anytime soon, hence growth of the smartphone market in 2017 will be impacted negatively if compared to previous years.”