One of the biggest challenges to repatriating the hundreds of thousands of refugees in Bangladesh will be convincing them it is safe to go home.

THE MYANMAR government wants to show the world that it is ready to accept refugees from Bangladesh.

Late last month, Frontier joined a government-sponsored media trip to northern Rakhine State, during which officials sought to highlight development projects in Maungdaw Township, the epicentre of the violence that convulsed the region last year.

The violence began on August 25 when the Arakan Rohingya Salvation Army launched coordinated attacks on police posts and a Tatmadaw base, killing 10 people and triggering a military response that sent nearly 700,000 people, most of them Rohingya Muslims, fleeing to safety in neighbouring Bangladesh. The United Nations, the United States and human rights groups have described the military operation as ethnic cleansing; Médecins Sans Frontières estimates that at least 6,700 Rohingya were killed in the first month of the operation.

Myanmar has largely denied that its forces committed any wrongdoing, and has pushed ahead with plans to begin repatriating the refugees, but many – including the UN and Rohingya in Bangladesh – say conditions on the ground are not conducive for returning to Rakhine.

The main concerns of the refugees are their safety and security in Myanmar. They also want guarantees about a path to citizenship and freedom of movement.

As part of its repatriation effort, Myanmar has built two processing centres for arriving returnees as well as what it says is a “temporary” transit camp at Hla Pho Khaung, which is capable of accommodating about 30,000 people. Many Muslim villages were reduced to ashes during the violence and it is not clear where their former residents will be permitted to live, should they decide to return.

The media trip, from June 27 to 29, included visits to those facilities, as well as interviews with officials to discuss government plans for development in northern Rakhine, which is one of the least developed and poorest parts of the country. It also included interviews with Rohingya refugees at an area between Myanmar and Bangladesh known as No Man’s Land; these interviews were conducted through a barbed wire border fence. 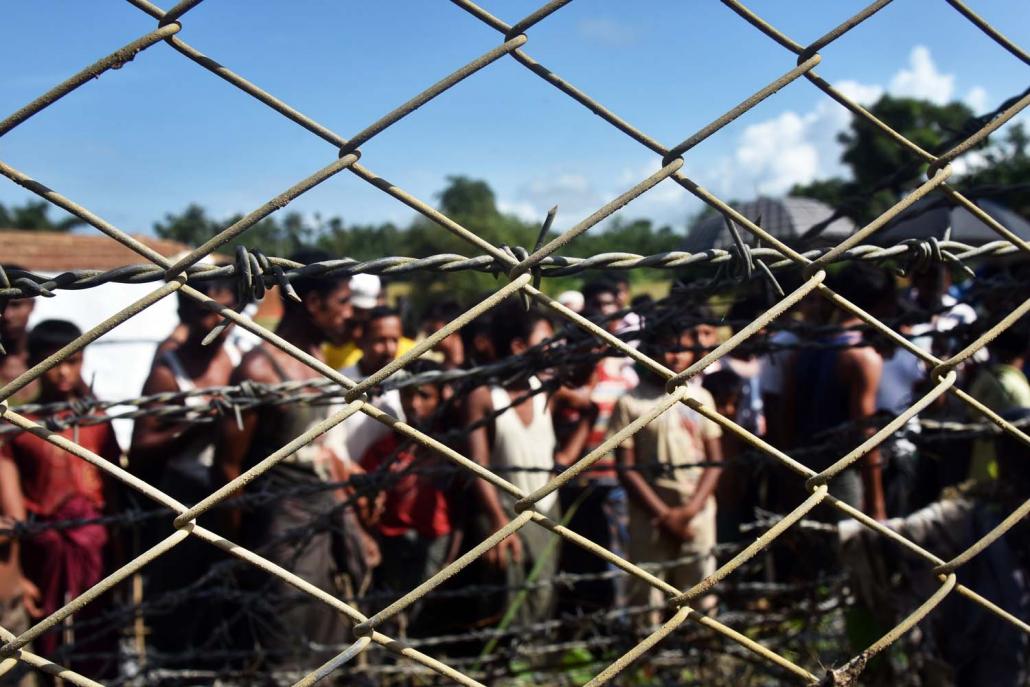 In many ways, the trip also highlighted how much needs to be done before repatriation can begin. Reporters were told of the fear harboured by Buddhists of their Muslim neighbours, saw the torched remains of countless Muslim villages and were made aware of a lack of confidence in the repatriation process among Rohingya refugees.

After leaving the state capital, Sittwe, the first stop of the trip was Inn Din village in southern Maungdaw Township.

Although the government has largely denied any wrongdoing in the Rakhine operation, the Tatmadaw admitted that soldiers were involved in the killing of 10 Rohingya men at Inn Din last September. Reuters journalists Ko Wa Lone and Ko Kyaw Soe Oo were investigating the massacre when they were arrested in December.

All of Inn Din’s Muslim residents have fled. The remaining Buddhist Rakhine say distrust between the two communities grew after a Rakhine man was killed by Muslims in nearby mountains before the August 25 attacks.

“Relations were great before,” one villager said. “We could go to the Muslim part of the village all the time, but it changed. Once the attacks happened, you couldn’t go there anymore.” 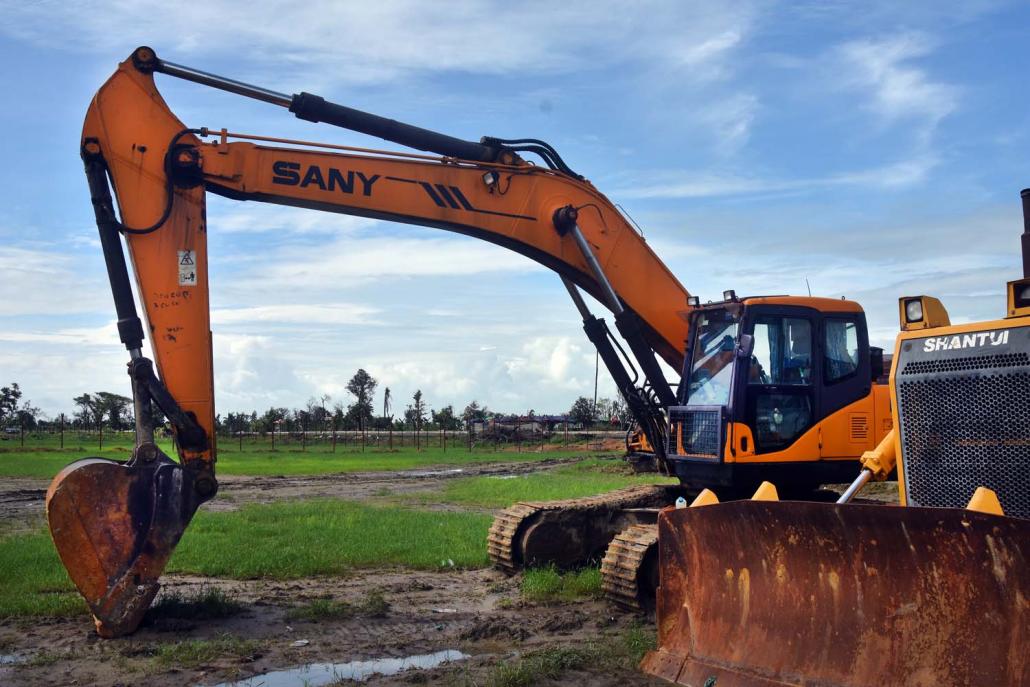 Some large development projects have begun in the southern part of the village where Muslims once lived. The charred remains of some houses are still visible in the area, which has become a busy construction site. There is a sprawling Border Guard Police compound, which residents said was built after the August attacks.

A gap in the narrative

The original itinerary for the trip included a visit to the Hla Pho Khaung transit camp, but it was cancelled because of what was said to be time constraints.

Reporters were taken to the Ngakhuya reception centre, where refugees returning across the Naf River will be processed before being transferred to Hla Pho Khaung. The other processing centre, on the border at Taungpyoletwe, is for refugees who return by land.

At Ngakhuya, officials from the Ministry of Labour, Immigration and Population told reporters that 154 returnees had been processed there in May and June.

U Htay Maung, an official in charge at Ngakhuya, said 16 of the returnees were children, and the remaining 138 had been issued with National Verification Cards.

It was not clear where the 138 people had been sent or if they had applied for citizenship. Other gaps in the government’s narrative quickly emerged.

Officials introduced journalists to nine men in a waiting room at the camp and said the group had returned to Myanmar from Bangladesh and been granted NVCs, which the purported returnees showed to the media. 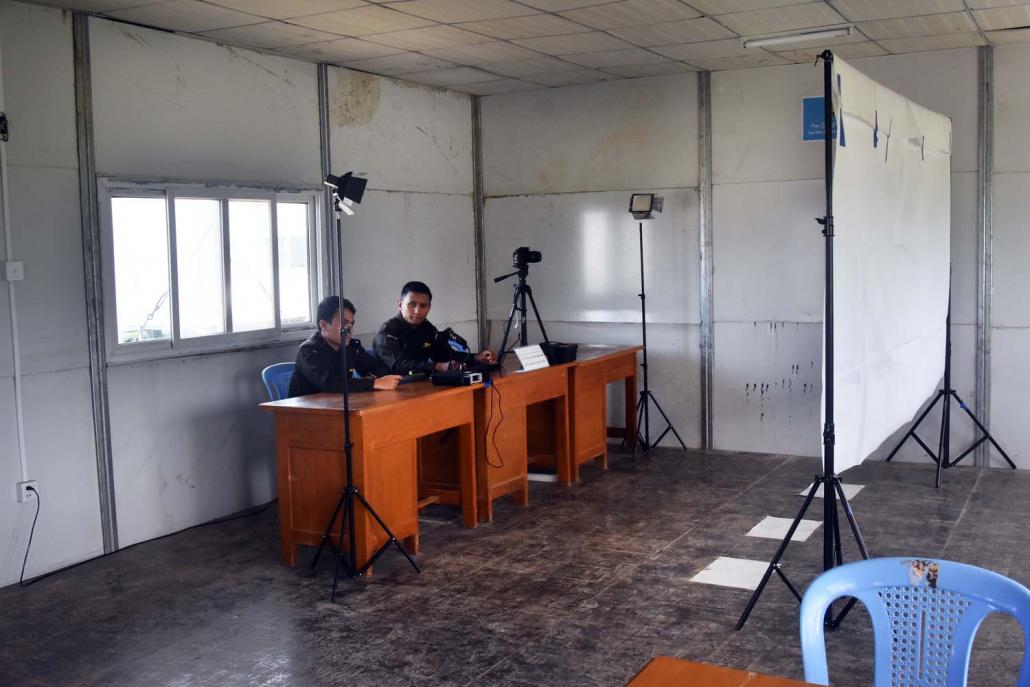 However, some of the men said they had never been to Bangladesh and had been arrested for immigration offences.

A walk through the facility also gave the impression that the repatriation process is likely to be slow. Rooms designated for processing returnees’ NVC applications had biometric equipment but were otherwise empty, except for staff who apparently had nothing to do.

Frontier asked one staff member what it was like to work at the camp. The person shrugged their shoulders and said it was “boring”.

At the border fence

The final day of the trip involved a two-hour drive north of Maungdaw to Taungpyoletwe, the centre built to process refugees who return by land.

This drive, which passes through northern Rakhine’s picturesque countryside, reveals perhaps the biggest challenge to repatriating the refugees: almost all of the Muslim villages are gone.

Throughout the journey the group observed the charred remains of villages on both sides of the road. In some could be seen the ruins of what had obviously been mosques. Frontier stopped counting after passing more than a dozen torched villages. 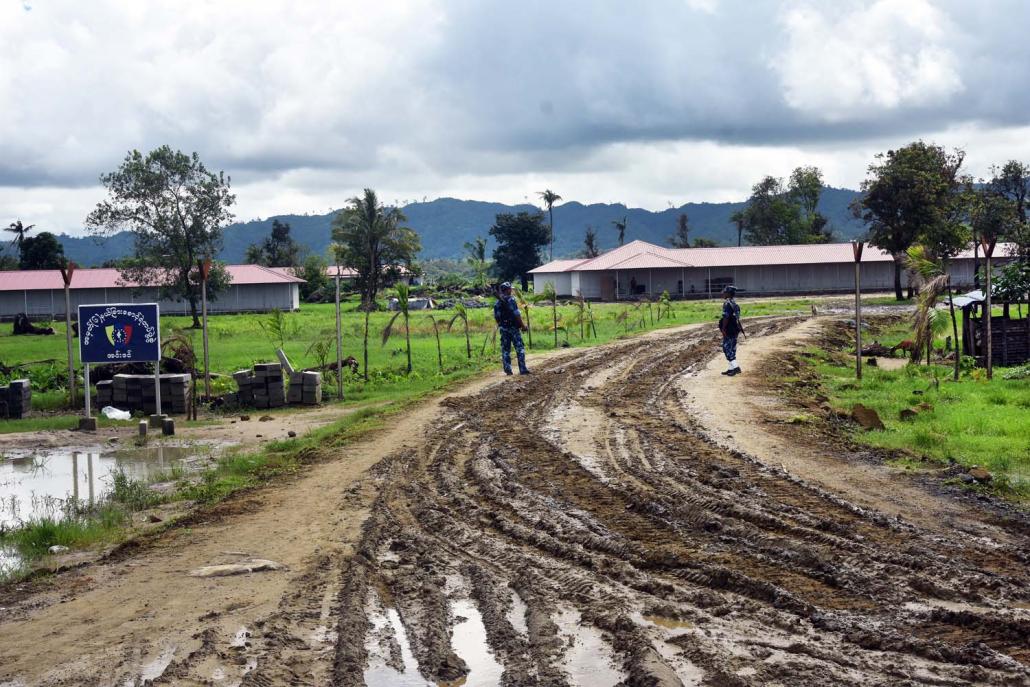 It was clear they had been deliberately torched. The surrounding areas, including paddy fields and Buddhist communities, were untouched. The journey passed three villages still occupied by Muslims, but most of the rest seemed to have been burned down.

After a quick stop at Taungpyoletwe – which is empty of returnees – the reporters were taken to the nearby border fence to speak with Rohingya living in “no man’s land” on a small island between Myanmar and Bangladesh.

In September, Frontier had visited the area from the Bangladesh side, and since then Myanmar has built barbed-wire fence about eight-feet (2.4 metres) high that is guarded by BGP officers.

Speaking through the new fence, Rohingya refugees said they would only return if they could be guaranteed citizenship, and the same rights as all other communities in Rakhine.

“We came here for our safety, but we want to go back to our homeland,” said U Mohammed Dill, a leader in the Rohingya camp. “We do not want to go to Bangladesh; we want to come back, but the government of Myanmar must make sure of our safety.”

TOP PHOTO: A Border Guard Police officer stands near a fence at the “No Man’s Land” area between Myanmar and Bangladesh. (Oliver Slow | Frontier)