Fred Hochberg, the chairman of the United States Export-Import Bank – a government agency that supports US investment and trade – discusses the need for financial reform, his bank’s plans to work with the private sector and where the opportunities lie for US exporters.

You opened an office in Myanmar in early 2014 but since then we have heard little about Ex-Im Bank. What have been your main activities over past two years?

We have opened, as you mentioned, in Myanmar two years ago. Since then, most of the transactions have been in aircraft – two Cessna Caravan aircraft for Myanmar National Airlines. I understand they may be purchasing more and they’re also going to be leasing some aircraft from General Electric.

I would say that in many markets, infrastructure and transportation tend to be first two exports that we often finance.

When you launched operations here, media reports quoted bank officials as saying there were “exciting opportunities” in Myanmar for US exporters. Has tapping into those opportunities proven harder than expected? If so, why?

Well, this is a market that we were closed [to] for 27 years. So, it’s not surprising [that] it takes times to move on, to open up, to attract US companies to do work here; for companies to establish a presence here, to get permits and so forth. I am here because this is an important market, a country that President Obama has opened up to, wants to do more business [with], wants to do more trade [with].

Our role at the Ex-Im bank is financing US exports of goods and services but, importantly, in key infrastructure areas – power, transportation – that really help build the economy, to put people to work and actually give Myanmar the tools so that they can create more economic growth and also more exports from Myanmar.

What feedback have you got from US businesses on this visit?

We just met with the American Chamber and I think there was a lot of interest in infrastructure and power. Myanmar is blessed with a lot of natural resources, so it can generate cleaner power and natural gas. I think those are the areas we have been active in around the world and in the region.

I was recently in Papua New Guinea and we worked there on a large LNG facility – liquefied natural gas. We have done work nearby in Indonesia in the rail and aircraft sector. So, those are the larger US exports we frequently engage in, in transportation and infrastructure. And I should add … we’ve done a lot globally with small business.

Which projects are you looking to support next in Myanmar?

We provide loans and guarantees and insurance. By policy right now, we are, generally speaking, limited to the government sector, to the sovereign sector. We are … working with the [International Monetary Fund] on a review of the credit profile of Myanmar. We’ll have a result on that in December.

We would look at a transaction from the private sector if it came to us – to see how it’s structured, what the revenue stream is, what the financials look like – and we would certainly consider that. 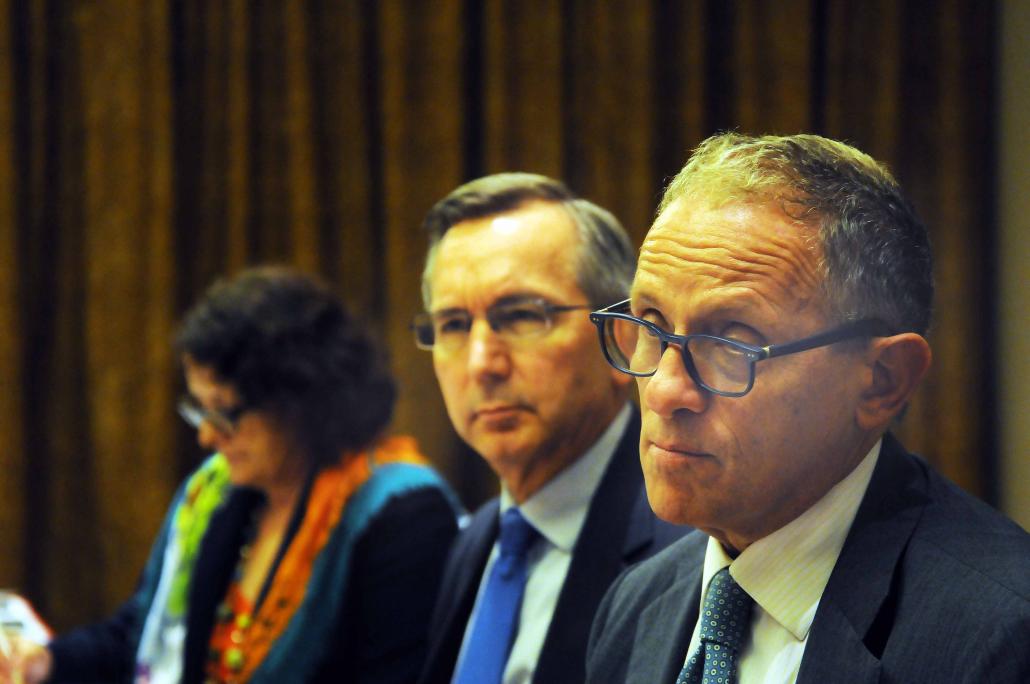 In Myanmar, where do you see the opportunities for US exporters?

I think the areas we just talked about – in infrastructure, in transportation, air, rail, building of airports, which will include things such as baggage screening, passenger screening, air traffic control systems. These are the kinds of things that we have financed in other countries in the region.

How about small business?

In the US, 90 percent of our customers are exporters, as small businesses. So that is a key area and we would work with businesses here. But generally speaking, in a country as developing as Myanmar … transportation [is needed] so that people and goods can move easily and power [is needed] to generate manufacturing and also provide better health care, better food and diets. So, those tend to be the building blocks to make a more sustainable and stronger economy.

In Myanmar, businesses face many challenges. What are the major difficulties for US exporters seeking to do business in Myanmar and what should the new government do to address these?

I think that there are challenges in the enforcement of contracts. There are challenges in banking regulations and the banking and monetary system from the Central Bank. So, as the government addresses those issues and moves them up to a standard that is found in other countries in the region that will help bring in more financial institutions, that will bring in more businesses that want to do business here.

In terms of bank regulations, clear regulations and clear oversight of the banking sector is one thing that would be important for us to expand our work here.

In terms of transparency in the banking system, making sure that’s there is adequate oversight of the banks, so that if there are non-performing loans that they are addressed – things that are sort of global standards for how banking systems [operate].

Those are the kinds of things that will help build confidence in the financial sector, which can help bring in more trade and more exports and more economic development.

Has US Ex-Im Bank faced any local regulatory issues in carrying out its function here?

I think that Myanmar is working to improve the ease of doing business, which has to do with things like regulations, permits and again as I mentioned attracting foreign banks so that there can be a method of transferring payments. Enforcement of contracts – all of these things would enhance our ability – and not just our ability, but [the ability of] other banks – to provide lending and credit to Myanmar.

What’s the next step for Ex-Im Bank in Myanmar?

I would say that we are anxious to do more work here. We are anxious to support the import of US goods and services to help the people of Myanmar build their economy, build their country, put more people to work … We are anxious to work with the government here and, in time, the private sector to bring those things forward. There is a lot of promise and a lot of potential here and we would like to be part of it.

Editor’s note: This interview has been edited for clarity.