A Thai company planning to build a $2.8 billion power plant says its advanced technology will prevent damage to the environment, but nearby residents are sceptical.

DIVISIONS ARE hardening in Kayin State over a planned coal-fired power plant that the government says is needed to support development but is opposed by some community groups due to worries about its possible impact on the environment.

The concerns focus mainly on the advanced technology that will be used at the US$2.8 billion power plant in Hpa-an Township, enabling it to burn less coal per megawatt hour than other methods of generating electricity from coal. Thai construction company TTCL Public Co Ltd and the state government signed a memorandum of understanding on April 3, 2017, to build the plant, which is expected to generate 1,280 megawatts when it is fully operational in 2024. TTCL has a 95 percent share in the project, with the state government holding the remaining five percent.

The site chosen for the plant covers 333 hectares (825 acres) on the Thanlwin (Salween) River, about 20 miles north of downtown Hpa-An, and the affected communities include Thoneinn village.

U Soe Hlaing, Kayin State minister for electricity and industry, said that the project has been approved by the state government and was now awaiting approval from the Union government.

“Having approved it, we will begin implementing the project as soon as possible,” he told Frontier on January 5.

But the project has met fierce resistance from local residents.

U Tayzaniya, the abbot of a monastery in Thoneinn village, is sceptical about claims that the advanced technology to be used at the plant will have no negative effect on the environment.

“What we know about coal is that it is not accepted in every state and region in the country,” Tayzaniya said, citing opposition to Myanmar’s first coal-fired power plant at Tigyit in southern Shan State. The facility’s operations were suspended by the Union Solidarity and Development Party government in 2014 amid community complaints about pollution but local residents have raised concerns that work could soon re-begin after test operations were conducted there in late 2016. 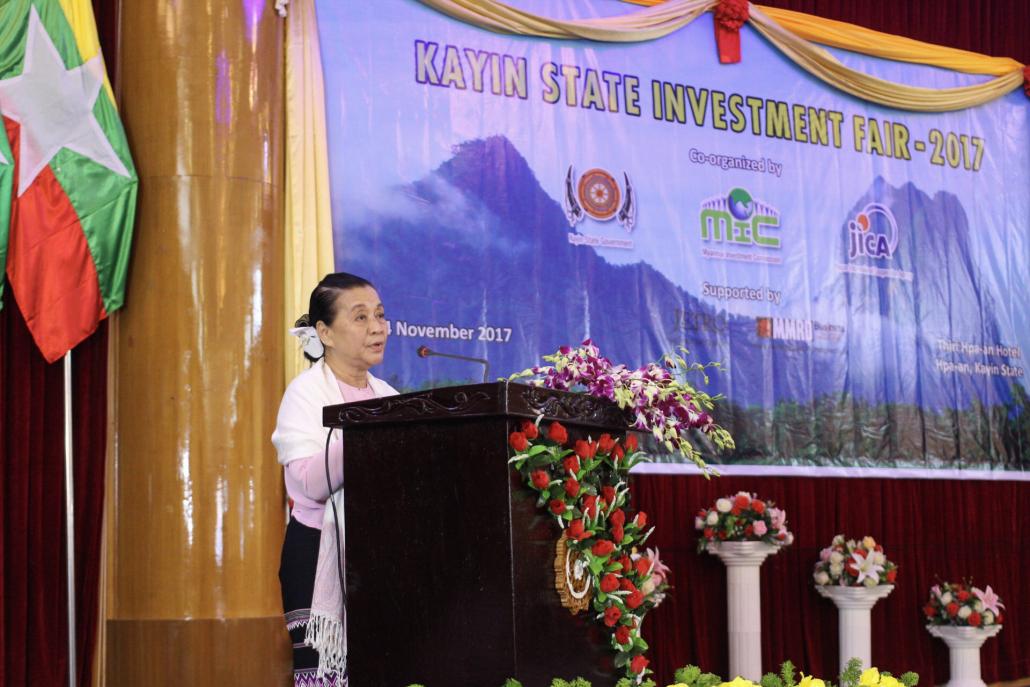 U Kuthala, a monk from Thaiktaw village, joined the trip alongside 20 other people from the local community. He said that they learned how coal fired plants can provide jobs for local people.

“However, I learned that coal power plants in Japan are built a long distance from where people live,” he said, adding that if the Thanlwin project was to go ahead, then the government and private company should talk to local people about the job opportunities and health risks.

“As far as we are aware, we know what impact coal can have and we worry about future risks; but there are always pros and cons,” Kuthala said.

Local resident Saw Nay Lin Htun, a Karen, said he wanted to see development in his home state, but hoped that it would go hand-in-hand with peace.

“We do not want coal at all and that is why we are asking the state government if a coal-fired power plant is the only solution to support development,” he said. “We want a solution that doesn’t involve coal.”

Nay Lin Htun said the state government and TTLC had given villagers only positive messages about using coal but CSOs have told affected communities to expect long-term negative impacts from the power plant.

“If this project goes ahead the forests and the river that we rely on for food and a living will be destroyed,” Nay Lin Htun said.

Burning coal to generate electricity will pollute the air, land and water and affect the health of people living near the plant, he said.

“In the name of development, our area will be destroyed. But other areas [of the country], they will have development,” he said.

Mr Saburo Obara, deputy vice president of TTLC, said that the relatively cheap cost and speed of implementation of the coal plant made the project necessary.

“Myanmar currently has a shortage of power, and it may be another 40 years before there will be enough electricity,” he said.

“If a project has more advantages than disadvantages we should consider it for development,” he told Frontier.

Tayzaniya expressed appreciation for Chief Minister Nang Khin Htwe Myint’s determination to develop Kayin, which has lagged behind other states and regions in part because it lacked electricity to support industrial growth.

“If there is electricity in Kayin State companies will come and invest,” he told Frontier.

However, he added that although TTLC had told villagers that the power plant would not have a negative impact on them or the environment, it was yet to give an assurance about taking responsibility for the facility.

The abbot said the first priorities of Kayin State residents were peace and a better transport system, and only after they were realised should the power plant be considered.

At a public consultation at a Hpa-an monastery on November 22, Nang Khin Htwe Myint urged local residents to consider the benefits it would bring to the state. She reiterated the plant’s importance for economic growth in the state at the Kayin Investment Fair in Hpa-an on November 24.

Speaking at the same event, Union Minister for Planning and Finance, U Kyaw Win, stressed the importance of electricity for development in his opening speech.

“Unless you have electricity, do not even think about development,” he said.