Displaced by war, waiting on the margins

YANGON — The hopes, concerns and needs of the tens of thousands of people who have been displaced by conflict must be central to any political process that establishes peace and reforms Myanmar into a federal democracy, says a civil society report released in Yangon on Thursday.

“There is no one who does not miss home”: A report on protracted displacement due to armed conflict in Burma/Myanmar is a collaborative effort by 15 ethnic civil society organisations working with displaced populations and was coordinated by Progressive Voice, a policy research and advocacy organisation.

“There is no one who does not want to go back,” said Naw Blooming Night Zar, spokesperson for the Karen Refugee Committee, which collaborated on the report.

Speaking at the report launch event about the almost 100,000 Karen refugees who remain in camps in Thailand, many of whom have lived there since the 1990s, she said, “We’re not happy living in another country. We are the people who ran for our lives.”

“We want to go back home but the situation does not allow us to do so,” she said, referring to the continued militarisation of Karen lands, despite a ceasefire between the Tatmadaw and the Karen Nation Union that has held since 2012, and the lack of guarantees over security, livelihoods and ancestral land rights.

Former United Nations special rapporteur Mr Paulo Sergio Pinheiro writes in a foreword to the report that internally displaced persons and refugees “must not remain a side note in the peace process”.

Pinheiro, who was special rapporteur on human rights in Myanmar from 2000 to 2008, says, “They deserve to be listened to and have their rights respected. This includes respecting their decision not to return if they feel unsafe, if there are no opportunities for them, or if they simply do not trust the current peace process.” 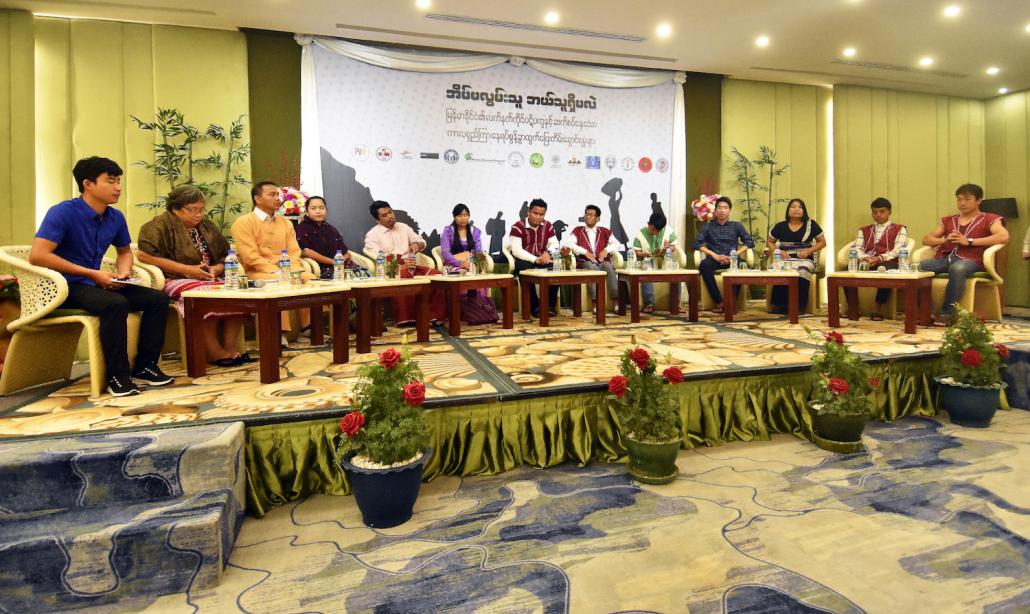 Members of ethnic-based civil society organisations that contributed to the report “There is no one who does not miss home” speak at the launch event in Yangon on June 20. (Steve Tickner | Frontier)

The 180-page report says that despite being on the margins of national politics and policymaking, ethnic minority communities displaced by armed conflict between the Tatmadaw and ethnic armed groups have demonstrated resiliency, “surviving through extreme circumstances and pushing back against attempts to make them return to a situation which is unsafe and ill-prepared to receive them”.

The report cites figures from December showing that, after several decades of displacement, there are now an estimated 97,000 refugees in camps in Thailand, most of whom are Karen and Karenni; 106,000 people, mainly Kachin, Ta’ang and Shan in IDP camps in Kachin and Shan states; and an estimated 280,000 IDPs in southeastern Myanmar.

The report’s findings do not cover Rakhine State, the site of heavy conflict and mass displacement in more recent years, which Progressive Voice research director Mr Alex Moodie said at the Thursday event was beyond the scope of the project.

The reports says, “Despite continuing clashes and a faltering peace process, humanitarian assistance for the refugee camps in Thailand and IDP camps within the country, as well as for cross-border civil society organizations and ethnic service providers, has significantly declined in recent years.”

The report criticises international donors who “have decreased humanitarian funding for these displaced populations while increasing funding for programs aimed at encouraging return, supporting the peace process and its formal architecture, and health, education and development projects inside Burma/Myanmar.”

Meanwhile, the Ministry of Social Welfare, Relief and Resettlement is seeking to close IDP camps in Rakhine, Kachin, Shan and Karen states as part of a process that the report claims is not consultative and about which civil society groups have been unable to obtain information or provide input.

Blooming Night Zar said at the Thursday event, “We civil society organisations, refugee committees, community-based organisations, who have been assisting for 30 years, are not consulted in dialogues about returns.” 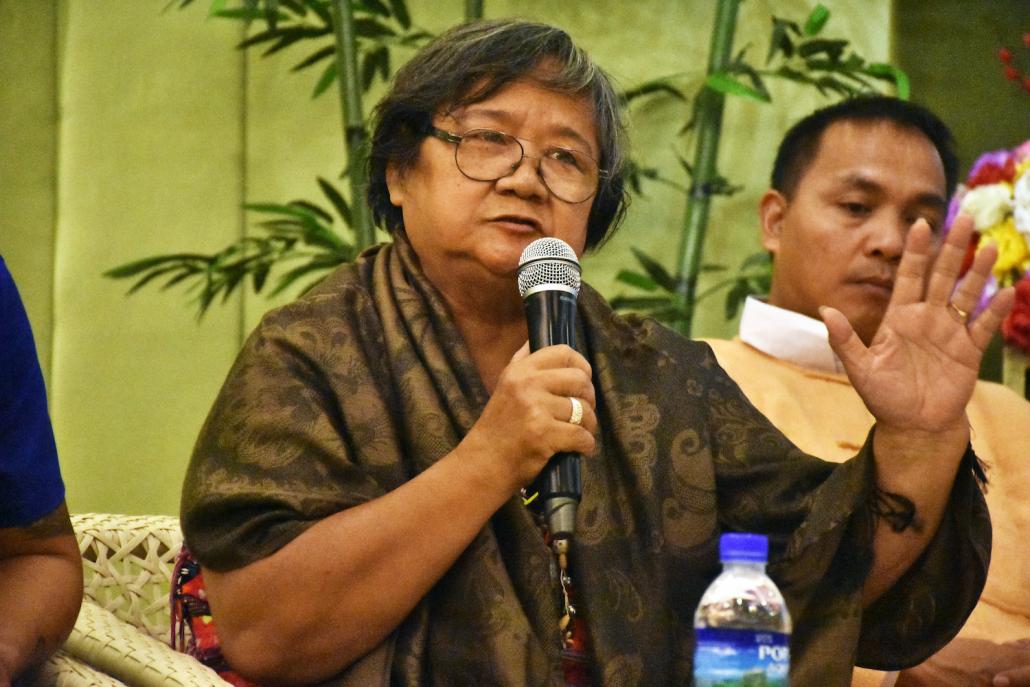 “There is no one who does not want to go back,” said Naw Blooming Night Zar (pictured), spokesperson for the Karen Refugee Committee, which collaborated on the report. (Steve Tickner | Frontier)

The report says squeezed conditions for refugees in Thailand has had grave side-effects: “Reduction of aid coupled with uncertainty about the future has led to higher rates of depression and suicide in refugee camps in Thailand, as well as reports of increased domestic violence, gambling, drug and alcohol dependency, and other social impacts.”

Accountability for war crimes and human rights abuses suffered by displaced people, and the restitution of land and property that they left behind, was cited at the Thursday event as essential for lasting peace and security.

“There must be some kind of accountability for the crimes that have been committed against ethnic people, otherwise the impunity that the Myanmar military currently enjoys will never end and there will be more displacement in future,” said Moodie.

Nai Aue Mon from the Human Rights Foundation of Monland, which also collaborated on the report, said this should extend to a programme of “transitional justice in order to build trust”.

Noting the next general election scheduled for late next year, he said, “This is the time to push for transitional justice and for repairing the violations of the past.”

Aue Mon insisted that economic development was no substitute: “Building new roads, new infrastructure, this is like a bribe to try to eradicate the violations of the past. These are not reparations.” 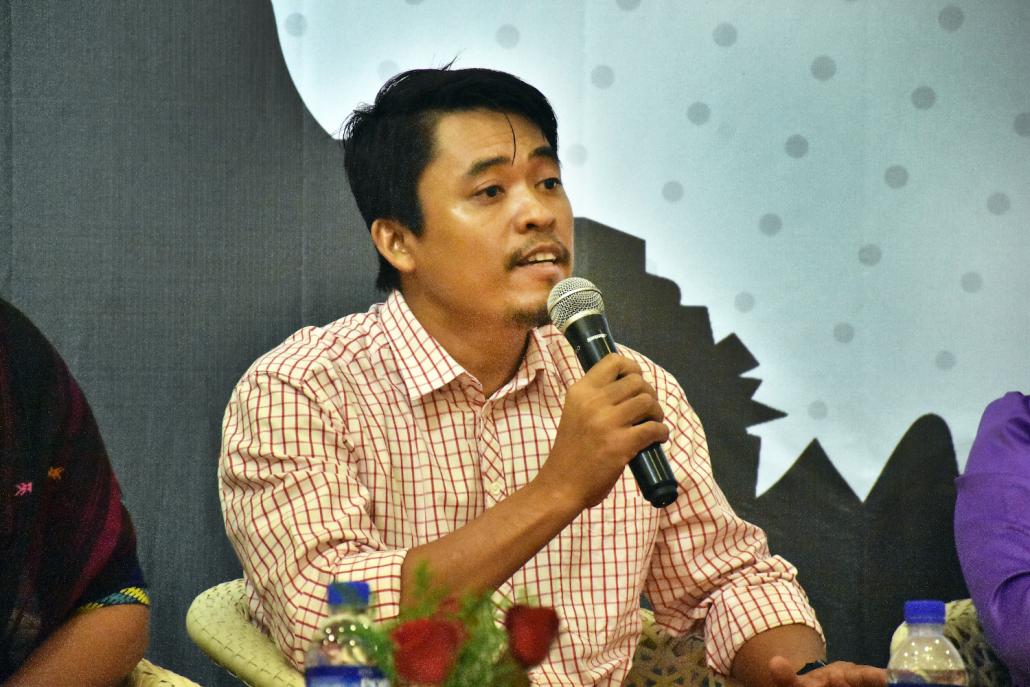 Nai Aue Mon from the Human Rights Foundation of Monland, which also collaborated on the report, called for a programme of “transitional justice in order to build trust”. (Steve Tickner | Frontier)

The report also states the importance of refugees receiving the information they need to make informed decisions about the process of return. Such information includes the specific kinds and amounts of assistance that will be provided and for how long, the current security and socioeconomic situation in their places of origin and proposed relocation sites, and realistic prospects for peace.

Interviews conducted for the report revealed many gaps in the information displaced people have about their options.

“More concerning about the lack of information is selective information that displaced people receive from international NGOs and UNHCR, including failing to report clashes near return sites and giving overly-optimistic information about the progress of the peace process,” the report says.

The report says offers by international donors to fund transport and provide three months of food grants to voluntary returnees were “clearly inadequate” given the challenges returnees will face in establishing a sustainable livelihood.

However, it adds, “The prime responsibility will be of the government to ensure that returnees have all necessary resources to establish themselves sustainably.”

Calling for displaced people to be meaningfully included in the peace process and political reforms, the reports argues, “The way that Burma/Myanmar’s political, military and civil society leaders treat the displaced” indicates a “ lack of commitment to fostering a democratic, inclusive and peaceful society”.

“Displaced people […] teach us that peace and security means more than an absence of war and conflict, and that sustainable peace requires treating all citizens of Burma/Myanmar equally, with dignity and respect.”