A survey of 200 executives has revealed high expectations for growth and highlighted the need for greater clarity and transparency in economic policies.

REFORMS ENACTED in Myanmar since 2011 have led to keen interest from investors eager to capitalise on opportunities in what many investors view as one of the world’s last frontier markets.

Five years later, the fruit of opportunity is yet to produce an abundant harvest across the spectrum of economic activity. While hopes remain high, that optimism is tempered with caution.

A survey by global strategy consultants Roland Berger has highlighted the optimism in the business community as the country makes progress toward economic reform, including creating a better investment environment.

“The business outlook is extremely positive,” Roland Berger said in a report on the survey’s findings released in early December titled: Myanmar: A wave of optimism – will it last? 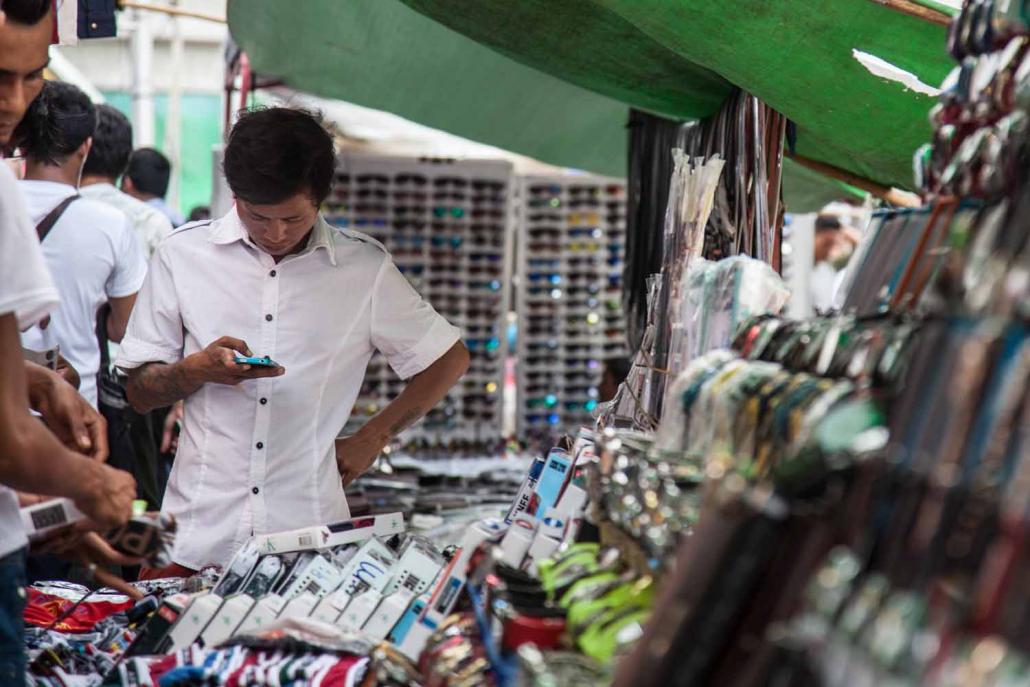 A man uses his phone at a stall in Yangon’s downtown area in July. Broadband development was near the top of businesses’ priorities for helping to unleash the country’s economic potential. (Theint Mon Soe — J / Frontier)

Heading a list of the report’s top three “take away” findings was that 73 percent of respondents expect the business environment to improve. The survey also found that 83 percent of firms were ready to contribute toward overcoming bottlenecks, such as by training staff.

A finding that will concentrate minds in government is that 97 percent of the firms regard a clear, transparent government economic policy as being essential to unleash the optimism and investment interest.

The survey was conducted in August and September and its 200 respondents were executives with telecommunications, media, technology, construction,

“The executives believe that Myanmar’s potential is genuine and that government reforms are here to stay,” the survey found.

The report said 73 percent of respondents expected the business landscape to improve or improve rapidly and 91 percent were hopeful of expanding operations in the next 12 months.

Only 22 percent believed “the situation will remain the same” in the next 12 months, and a mere five percent thought it would “deteriorate slowly”.

Of the seven broad categories by activity, respondents in hotels and tourism were the most optimistic, with a total of 86 percent having high expectations that the economy and business landscape would improve or improve rapidly in the coming year. 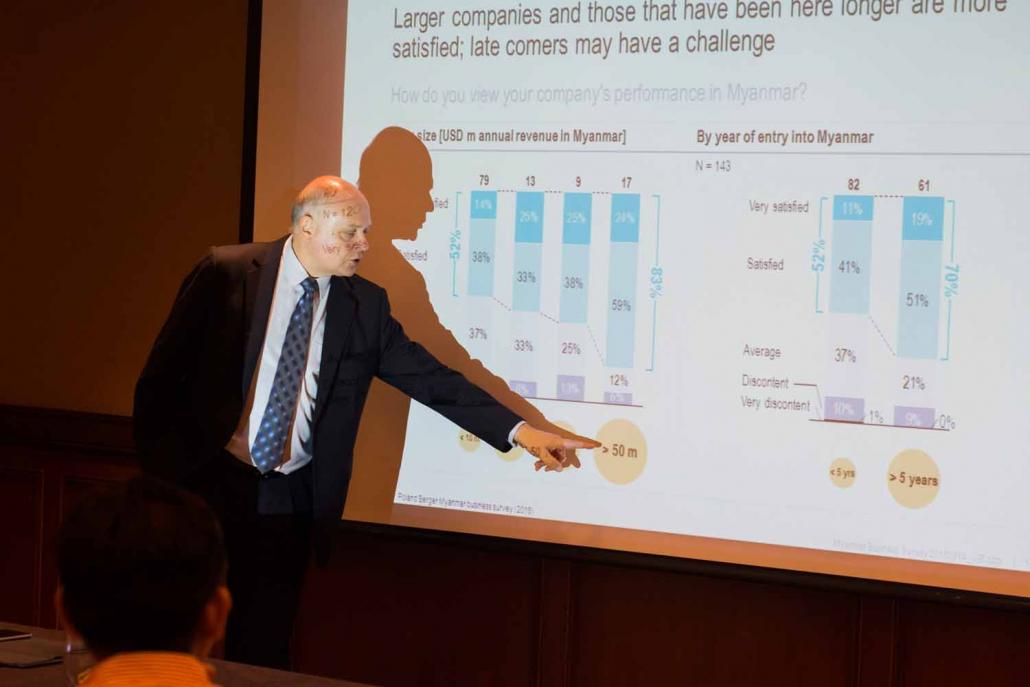 The next most optimistic respondents were those in utilities, oil & gas and chemicals (80 percent), financial services (77 percent), telecommunications, media and technology (74 percent), professional services (72 percent), and construction and real estate (65 percent). The least optimistic executives were in retail and distribution, with a total of 62 percent expecting better times in the coming year.

An interesting finding was that larger and older businesses were more satisfied than smaller and newer companies. A total of 83 percent of the businesses with more than US$50 million annual revenue said they were satisfied with their performance, compared with 60 percent of smaller firms by revenue.

About 70 percent of the firms that have operated in Myanmar for more than five years were satisfied with their performance, a self-assessment given by about half of newer firms.

Although respondents said the decisions by the European Union and the United States to lift sanctions would boost international investment, they identified a number of obstacles and constraints.

“Myanmar’s potential is real, but so are the roadblocks,” the report said.

It also outlined respondents’ opinions on the most important measures that the government needs to take to significantly boost the economy.

Many in the business community will not be surprised to learn that the need for transparent government policy heads the list, and was rated as “very significant” or “significant” by 97 percent of respondents.

U Han Thar Myint, the head of the ruling National League for Democracy’s economic committee, believes a reluctance by some bureaucrats to embrace change is hampering the government’s economic reform agenda.

“All the investors are sitting and waiting because when they deal with our bureaucracy, the bureaucrats are waiting from their superiors and all the processes are stuck,” he was quoted as saying in the October edition of Renaissance Myanmar magazine, published by the Renaissance Institute, a Yangon-based think-tank that advises the NLD on economic policy.

“We are working on [changing] this as fast as we can but some dare not do it because they are used to it and are worried they will be scolded if they [make decisions] themselves,” Han Thar Myint said.

The survey’s findings, in favour of greater regulatory and legislative certainty as well as transparency, will resonate with those who sharply criticised the lack of detail in the 12-point, three-page economic policy released by the NLD government in July.

Speaking at an investment forum in Nay Pyi Taw in September, Minister for National Planning and Finance U Kyaw Win responded to the criticism by saying detailed policies according to sector would be provided that month, but the community is still waiting.

He said the government’s 12-point economic policy was not well understood because it covered only a few pages.

“It was not specific but we will do it sector by sector and now we are compromising with the bureaucracy,” Han Thar Myint told Renaissance. Many of the new NLD ministers are new to the roles and need to discuss with officials who have many years’ experience dealing with the country’s often arduous bureaucratic process.

Mr Thomas Klotz, Roland Berger’s managing partner Southeast Asia, said it was time for the government to decide what the policies should be in the areas it has not yet revealed its plans. These include trade and energy policies, among others.

The report suggested that the obstacles identified in the survey indicated the need for comprehensive public sector reform.

It said bureaucrats had given assurances when the report was being prepared that there was an awareness of the need and urgency to clarify and provide detail on economic policies, and a determination to move from planning to action.