Life’s hard for the salt farming communities in the far south of Ayeyarwady Region, where services are basic, food is scarce and debt is never-ending.

It’s a 90-minute motorbike journey south from the Ayeyarwady delta town of Labutta before you get the first glimpses of the region’s salt-making villages.

The contrast with the green paddy fields and crab-farming ponds of the delta’s interior is stark. The salt farming communities are set in a vast, white landscape, the glare from which can be overpowering.

Frontier arrived at a little jetty where a woman was waiting with her two sons, aged 12 and eight months, for a small boat to cross a narrow creek. The woman, a worker at a nearby salt farm, looked as if she was more than 60 but when asked her age, she said she was 45.

After crossing the creek and passing through a village called Oo Yin Kone, Frontier travelled another 15 minutes by motorbike to the remote salt-making village of Hsin Chay Yar (“Elephant’s Footprint”). About three-quarters of the residents here work on salt farms owned by its administrator, who inherited the business from his ancestors.

Hsin Chay Yar is fairly typical of the salt-making communities in this area of Labutta Township, in the mouth of the delta, which is one of the main salt production centres in Myanmar. The salt is valued as an export product, but living conditions in the villages are grim and working on the salt farms is an ordeal.

Almost all salt farm workers are stuck in a cycle of debt because of the seasonal availability of jobs. The salt farms are operated for six or seven months and at other times of the year job opportunities are limited. Some residents struggle to survive by catching fish in the area’s many waterways, but since crops cannot be grown on the land around the salt farms, there are no opportunities for seasonal work on plantations.

During this time, many of them have no choice but to take loans at high interest rates – 15 percent a month is not uncommon – to pay for food, clothing and their children’s education. The person they borrow from is usually also the owner of the village’s salt farms, and residents repay these debts by working on the farms. 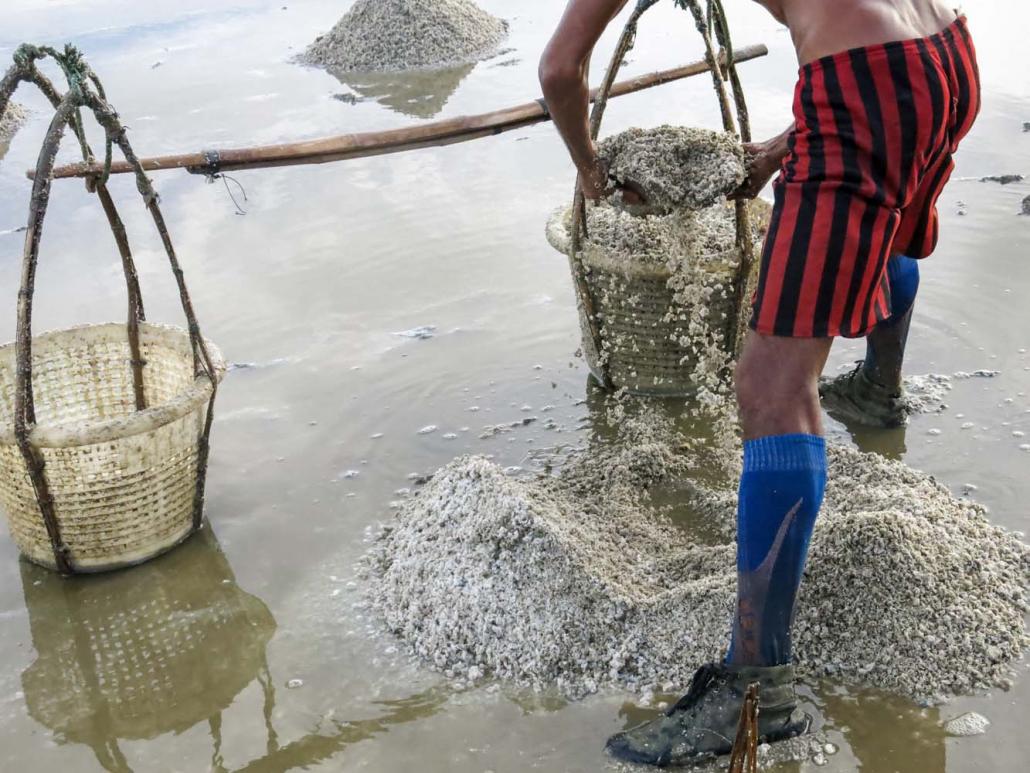 Most salt farm workers are stuck in a cycle of debt due to the lack of livelihood opportunities for the other six months of the year. (Kyaw Lin Htoon | Frontier)

A lasting impression of the salt farm workers is the lack of any emotion in their faces.

In the stark glare of a dry evaporation pond, two men in their 40s were waiting with baskets to be filled by raw salt collected by women when Frontier visited. The women are not paid workers, though. They are helping their husbands so that they could meet their daily production targets, and not fall behind on loan repayments.

Thant Zin Oo said that the salt farmers were exploiting workers by trapping them in a debt cycle. “They use debt as a weapon,” he said. “It’s a problem in all salt-farming villages in this area, not just Hsin Chay Yar. But this is the only job that we have. Before we could do fishing as well, but now the catches are too low.”

U Thein Oo, 45, is a fisherman and the father of four children aged between three and 27. He also said the fish population had declined significantly over the past two decades, dramatically reducing the size of his catch.

Because of limited job opportunities, his two oldest children had left to work in garment factories in Yangon’s Hlaing Tharyar Township, which has a large population of migrant workers from Ayeyarwady Region.

Thein Oo has worked on salt farms in an effort to pay off his debts, but the work is so gruelling that he quit as soon as possible. “I’ve decided never to do that work again,” he said.

Most of the salt farm owners are also formal village-tract administrators or informal village leaders. Though the former position is now elected, it is still often monopolised by particular families. In most of these villages, these administrators are the only government presence. Besides owning the salt fields, they are responsible for security, infrastructure development and providing assistance in emergencies. 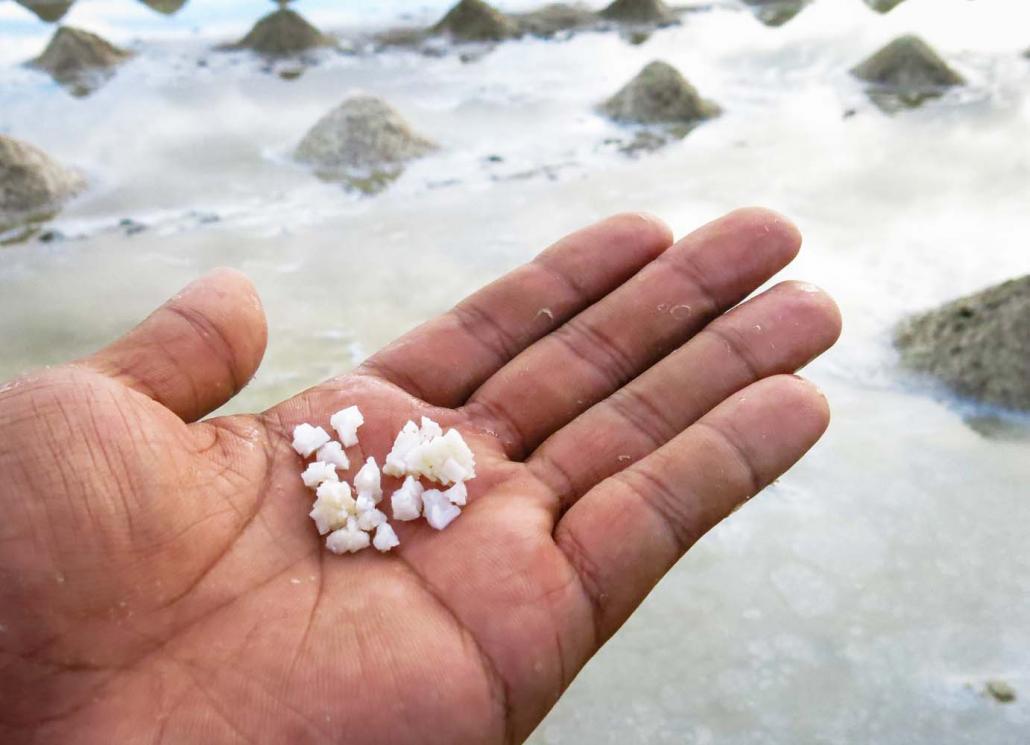 U Soe Min Naing, the elected administrator of Hsin Chay Yar village tract, certainly does not give the impression of being a gangster.

He was eager to talk to Frontier about the lack of development in the area and the challenges he faces administering nine villages, including Hsin Chay Yar.

One of his concerns is the complete lack of police presence in the village tract. “If there is a drunk waving a sword and threatening the whole village, what should I do? I don’t have a knife bigger than a kitchen knife and I have no experience of any martial arts training,” he said.

Soe Min Naing also raised the lack of basic services in the village tract, including schools. The school in Hsin Chay Yar provides classes only to grade 4. Students who want to continue their education need to travel to the school at Oo Yin Kone to attend grades 5 to 8.

After completing their middle school education, students then have the option of attending high school in Labutta. However, few students from the salt-farming communities advance to high school.

Of the 46 dwellings in Hsin Chay Yar, which has more than 170 residents, only Soe Min Naing has a sturdy house built of brick. He is also the only person with satellite TV in a village where many residents struggle to have enough drinking water and food every day.

Before Cyclone Nargis devastated the delta in 2008, Hsin Chay Yar was nearly twice as big, with more than 70 households, but many families perished in the disaster and others have since left to find work, usually at factories in Hlaing Tharyar.

“The lives of most of the [salt farm] workers and villagers are hopeless because they cannot escape from the cycle of debt. No government officials are aware of their plight and it is difficult for us to help them effectively,” said Daw Aye Aye Maw, founder of the Labutta-based civil society organisation Swan Saung Shin. 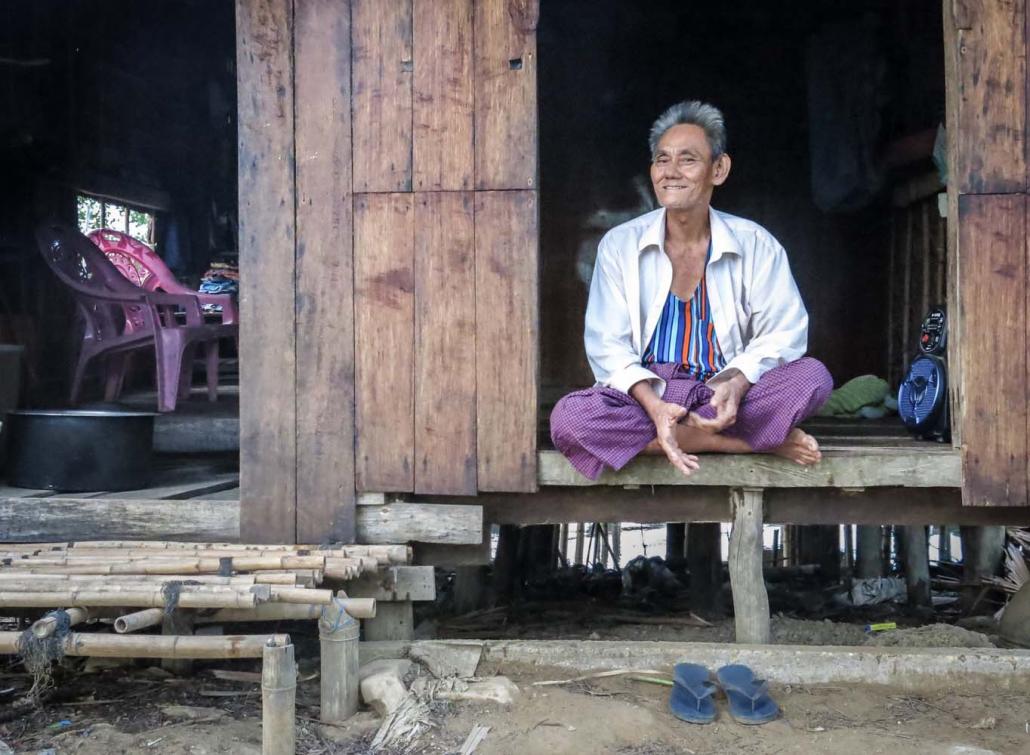 U Aung Thein, 84, is the oldest resident of Hsin Chay Yar. The village was devastated by Cyclone Nargis in 2008. Many families perished or migrated away after the disaster, and the population is half its pre-cyclone level. (Kyaw Lin Htoon | Frontier)

Swan Saung Shin has been doing what it can to help improve living conditions in Hsin Chay Yar and other nearby villages, including using funding from an internaional NGO to sink wells to overcome a shortage of fresh water.

Other activities have included research into the causes of migration and, earlier this year, promoting awareness about the importance of nutrition and balanced diets.

On the outskirts of Hsin Chay Yar is a pond dug with funds from the European Union that is the only reserve of fresh water for the village. When Frontier visited in May the pond was almost completely dry.

Soe Min Naing is hopeful that the village tract will receive support from the government or more help from foreign or domestic NGOs.

“What we need is supplies, not knowledge,” he said. “If a health-promotion group visits but cannot provide some paracetamol pills to each household, how can it achieve its purpose?” he said.

“Words and advice alone are not going to help us. We need more than just hot air!”