Outspoken former Yangon Region lawmaker Daw Nyo Nyo Thin has opened a school for those who want to become involved in politics. Launching the School of Law, Gender & Politics in Yangon on August 6, Nyo Nyo Thin said it was aimed at meeting a need for professional politicians and administrators in government. The anti-corruption crusader won a seat in the Yangon regional assembly for the Democratic Party in 2010 but lost to the National League for Democracy when she stood as an independent for the Pyithu Hluttaw seat of Bahan Township in 2015. She spoke to Frontier’s Su Myat Mon.

Why did you decide to open the School of Law, Gender & Politics?

We need to foster intellectuals with an interest in the law who can lead and build the country. The school will not be for those whose only motivation for learning is to get rich. Instead, the SLGP will encourage research-based study of the law. It will not be the kind of place where a projector screens a presentation on a white board.

Legal education was changed by U Ne Win in the 1960s as part of his attempt to reform the entire education system. Since then we have been in trouble with legal education because the teaching method only involved reading about the law, using the rote-learning method. I was included in this, too, and I did not know about the principles of the law. Legal education did not encourage the development of critical thinking skills. Law books are still outdated – some are from the colonial era – and this is a big weakness in legal education.

Legal education reform has been expected since the U Thein Sein government took power in 2011 but restrictions continue to be imposed on universities, such as against hiring foreign academics. Yangon Region Chief Minister U Phyo Min Thein recently put more restrictions on Yangon University. Academic staff at universities fear the consequences of dealing with foreign universities. Once the educated people have fear, it is not good for the country.

When I studied for a Doctor of Law in Japan I was shocked by the legal education system in Myanmar. It made me worried for our country and that’s what gave me the idea of opening the school.

If my existence in this world was to end, the legal education I learned would be gone. So I want a new generation to maintain the rule of law and justice in the country.

How would you describe the political situation in Myanmar?

Legal reform is essential to create a democratic country. It will require amending and abolishing old laws and enacting new laws, in line with policy. About 400 of the laws we use are from the British time and are no longer appropriate for our country. The parliament is responsible for legal reform and it is easy to abolish laws that are unnecessary; it needs only a vote of 50 percent plus one vote.

Unless the government elected by the people makes more progress on legal reform we cannot be certain that the democracy group will have such a large number of seats in parliament after the 2020 election. This is because the political situation is changing and there are also many problems in ethnic minority areas. The situation means that the best time to reform legal education is over the next two years, because the government will need to devote the year before the election to preparation. 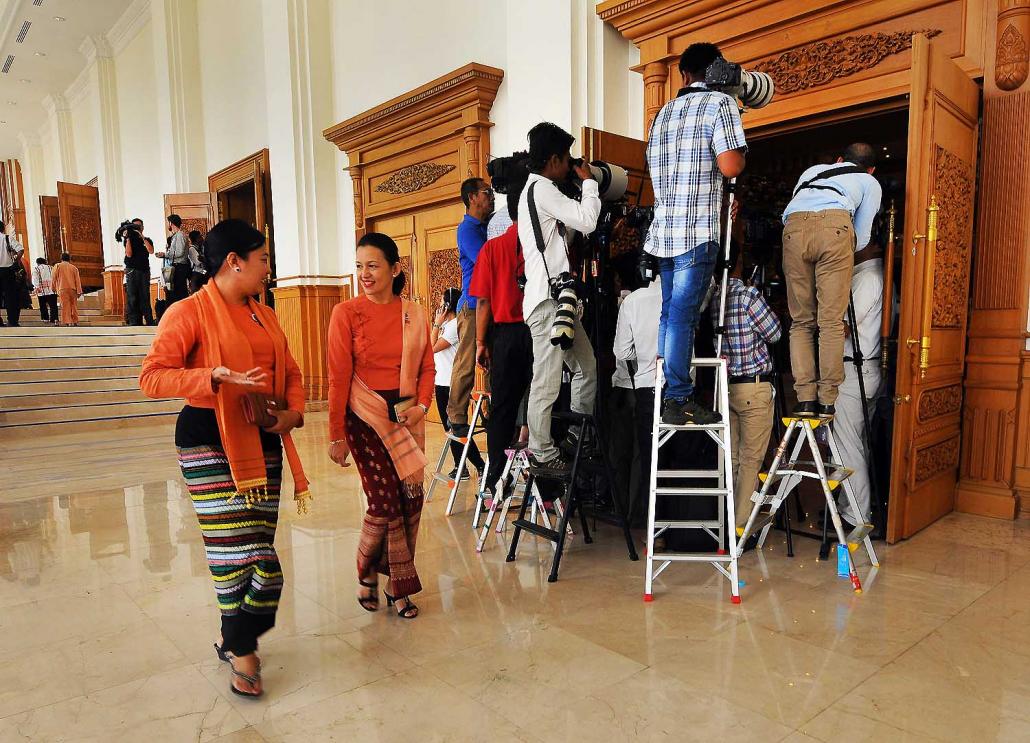 Female MPs walk past media on the opening day of parliament in March 2016. (Steve Tickner | Frontier)

A lack of proper legal education has resulted in lawmakers with a weak understanding of the law and this is hampering law reform. There’s also the fact that some of those responsible for implementing the law and law enforcement, such as police, judges and lawyers, are involved in breaching the law.

Comprehensive legal reform is needed to take the country forward but there has been no change in policy on the judiciary since the change of government. This is why the SLGP is needed: We need people who understand how to build the country with the law.

You spoke highly at the launch about those you call “professional politicians”? Who are they?

Professional politicians never give excuses, such as saying something cannot be done because of the 2008 Constitution or because of restrictions imposed by their party.

I agree with the foreign observer who noted that the law-making capacity of the National League for Democracy government is weaker than that of the previous U Thein Sein government.

Who is the professional politician you most admire?

When I was young I used to admire Bogyoke Aung San because of his role in the struggle for independence, and his involvement in [drafting] the 1947 constitution and laws that were fair to the ethnic people. I don’t know much about how he trained to be a professional politician; perhaps his talent and the books he read made him a good, professional politician. He was honest, too, but what I most liked about him was his humbleness. As a politician, he went to foreign countries with only one set of clothes, his uniform. We need more politicians like him who have only one suit [laughing].

The other professional politicians I admire are Che Guevara, because he was a rebel, [Vietnamese revolutionary leader] Ho Chi Minh, and the Indonesian President, Joko Widodo, because he is humble and is close to the people at the grassroots.

The politicians I most admire have humility and are natural people; they don’t care about fashion.

Why is gender part of the school’s focus?

Gender is the foundation that helps to shape the country and is a cross-cutting issue.

However, gender as a topic is misinterpreted by women’s rights advocates, donors and national leaders. Gender is seen as a women’s rights issue, but it is more than that. Gender is about both men’s and women’s rights and is directly related to many development issues. It goes beyond asking for a quota of 30 percent representation in parliament for women.

There are many misunderstandings about this issue and they will be highlighted at the SLGP by having a Department of Gender.