State Counsellor Daw Aung San Suu Kyi has addressed the international community about the crisis in Rakhine State, promising that all substantiated human rights violations will be dealt with by “strict justice”.

Aung San Suu Kyi said her government is “committed to the restoration of peace, stability and rule of law throughout the state”.

In a speech held in Nay Pyi Taw on Tuesday morning, Aung San Suu Kyi invited the international community to help her government deal with the situation, and said it would work with Bangladesh to help repatriate refugees who could prove that they had citizenship in Myanmar.

The speech was delivered in English and aired on state-run television without Myanmar subtitles.

The speech gave her first public comments about the situation since early September, when she blamed the situation on “a huge iceberg of misinformation”.

The Nobel Peace Prize laureate has faced fierce international criticism for her government’s handling of the crisis, particularly the treatment of the Muslim minority who identify as Rohingya; an estimated 400,000 of which have fled over the border into Bangladesh in the past three weeks.

About 30,000 people from other ethnic groups, including Rakhine and Hindus, have been displaced within the state by the violence.

However, the approach of the military and government in Rakhine State has garnered widespread support domestically. Thousands of people took to the streets in downtown Yangon to watch her speech on Tuesday, many of them dancing and singing nationalist songs.

The latest outbreak of violence in Rakhine started on August 25 when the Arakan Rohingya Salvation Army attacked 30 police outposts and a military camp, killing about a dozen security officers.

The attacks led to a security clearance operation that has prompted accusations of abuses by security forces, including arson, torture and killing.

Human Rights Watch said earlier on Tuesday that satellite images showed 214 villages in northern Rakhine State had been almost totally destroyed. The military and government says Muslims are burning their own homes in order to tarnish the military’s image and attract international support. Reporters on a recent government-sponsored trip said they saw groups of Rakhine men setting fire to Muslim homes.

In her speech in Nay Pyi Taw, Aung San Suu Kyi said there had been no armed clashes or clearance operations in the state since September 5. However, since as recently as Monday afternoon, Frontier has been sent videos appearing to show villages burning in northern Rakhine.

“The security forces have been instructed to adhere strictly to the code of conduct, to exercise all due restraint and to take full measures to avoid the harming of innocent civilians,” she said. 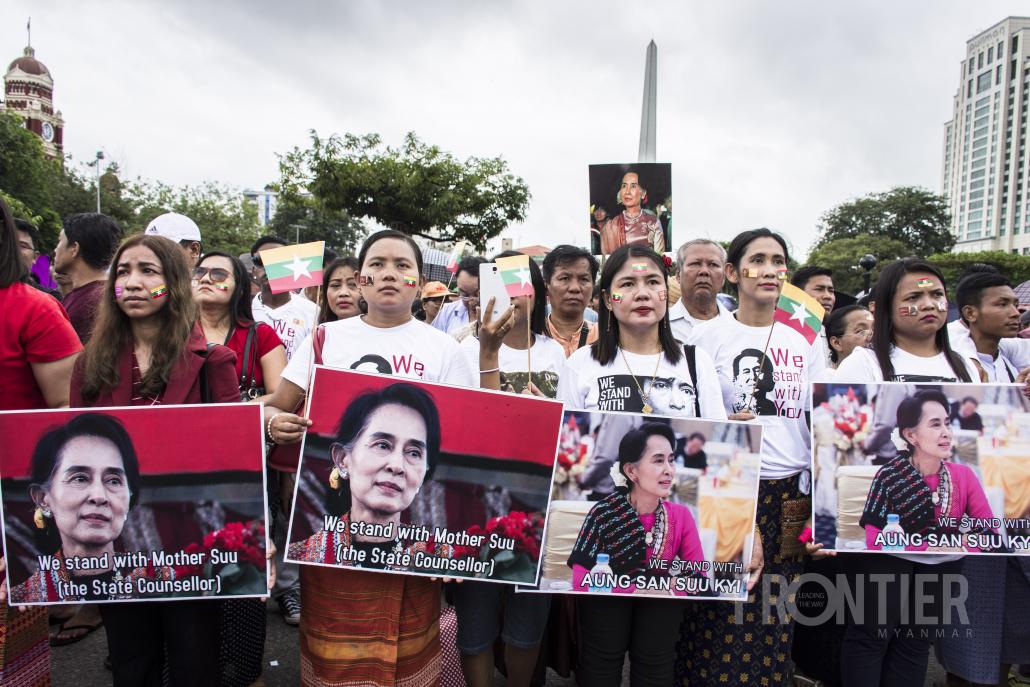 A large audience of supporters of the government in Yangon watched a televised relay of Aung San Suu Kyi’s speech at Maha Bandoola Garden on Tuesday morning. (Theint Mon Soe aka J | Frontier)

The State Counsellor also said that many in the international community do not fully understand what is happening in northern Rakhine.

“Those who have had to flee their homes are many. Not just Muslims and Rakhine, but also small minority groups … of whose presence most of the world is totally unaware,” she said. “The government is working to restore the situation to normalcy.”

However, she expressed concern about the number of Muslims fleeing across the border into Bangladesh, and avoided using the terms “Rohingya” or “Bengali” to describe the state’s Muslim population.

“We want to find out why this exodus is happening. We would like to talk to those who have fled, as well as those who have stayed. I think it is very little known that the great majority of Muslims in Rakhine State have not joined the exodus. More than 50 percent of the villages of Muslims intact. They are as they were before the attacks took place,” she said.

She added that her government would implement the recommendations of the Advisory Commission on Rakhine State – released publicly the day before the ARSA attacks were launched – as soon as possible.

“Every single recommendation that will benefit peace and harmony and development in Rakhine State will be implemented within the shortest time possible,” she said.

The report called for full and unimpeded access to humanitarian and media actors in northern Rakhine State, as well as access to healthcare, education and livelihoods for all people. It also urged the government to review the 1982 Citizenship Law, through which many Rohingya have been denied access to citizenship.

She called on the international community to not only view Myanmar through the prism of events in Rakhine State, adding that she found it “sad” that so many were focused on only one of the country’s many problems.

Speaking to reporters immediately after the speech, Mr Andrew Kirkwood, from the United Nations Office for Project Services, called the speech “a positive development”.

“I think today’s welcoming of the international community to travel to Rakhine to see the situation is a positive statement and we wait to see what follow up there is,” he said.

Elsewhere, the reception was less positive. UK-based rights group Amnesty International accused the State Counsellor of “burying her head in the sand” over the true situation in Rakhine.

“Aung San Suu Kyi rightly pointed to challenges around conflicts in other parts of the country. But the fact remains that ethnic minorities are also suffering severe human rights violations by the military, notably in Kachin and northern Shan States. These patterns will continue as long as the security forces enjoy near total impunity.”