Despite ambitious plans for a development project in Maungdaw aimed at boosting trade with Bangladesh, businesspeople in Rakhine say the state’s economy is in deep trouble and may take years to recover from the unfolding crisis.

AS A grim humanitarian crisis continues to put a spotlight on Rakhine State, plans are continuing for an economic development zone in conflict-hit Maungdaw Township, officials said.

The Rakhine State government has signed a memorandum of understanding to develop the zone with the Naff River Galaxy Infrastructure Development Group, which was registered as a company on September 5, show records from the Directorate of Investment and Company Administration.

Speaking more than two weeks after the August 25 attacks by fighters from the Arakan Rohingya Salvation Army that triggered the crisis, U Aung Naing Oo, the director-general of DICA, said he didn’t believe that the conflict would affect investment.

“The current crisis in Rakhine is not really an obstacle for investment,” he told Irrawaddy.

Rakhine State Minister for Finance and Planning U Kyaw Aye Thein said the Maungdaw project would have some features of a special economic zone but would be administered by the state government rather than the Union government.

Investors will be able to lease land in the zone at low cost and will pay zero tax, he said.

Kyaw Aye Thein said Naff River Galaxy Infrastructure Development Group was a consortium of “about seven” businesses from Maungdaw and Yangon, but declined to give names.

The state government had encouraged Maungdaw business leaders to form a consortium after holding informal talks with them about the plan and they had invited investors from Yangon to partner in the project, he said.

The company’s two directors are U Kyaw Naing Than, who holds a Citizenship Scrutiny Card issued in Maungdaw Township, and U Kyaw Tint, who holds a CSC issued in Yangon’s Lanmadaw Township. DICA records show that neither man holds any other directorships.

Kyaw Aye Thein said the planning for the project had begun well before August 25 and expressed confidence it would go ahead, despite the situation in northern Rakhine.

“The crisis is only affecting the export of goods from Maungdaw to Bangladesh; the other trading is continuing,” said U Shwe Maung, chairman of the Sittwe-based Economic Initiative Company, a trading firm.

Shwe Maung, who trades in tea-leaf and rice shipped between Sittwe and Yangon, said he and his associates welcome the plans for an economic zone in Maungdaw because they believe it will lead to more business with Bangladesh. 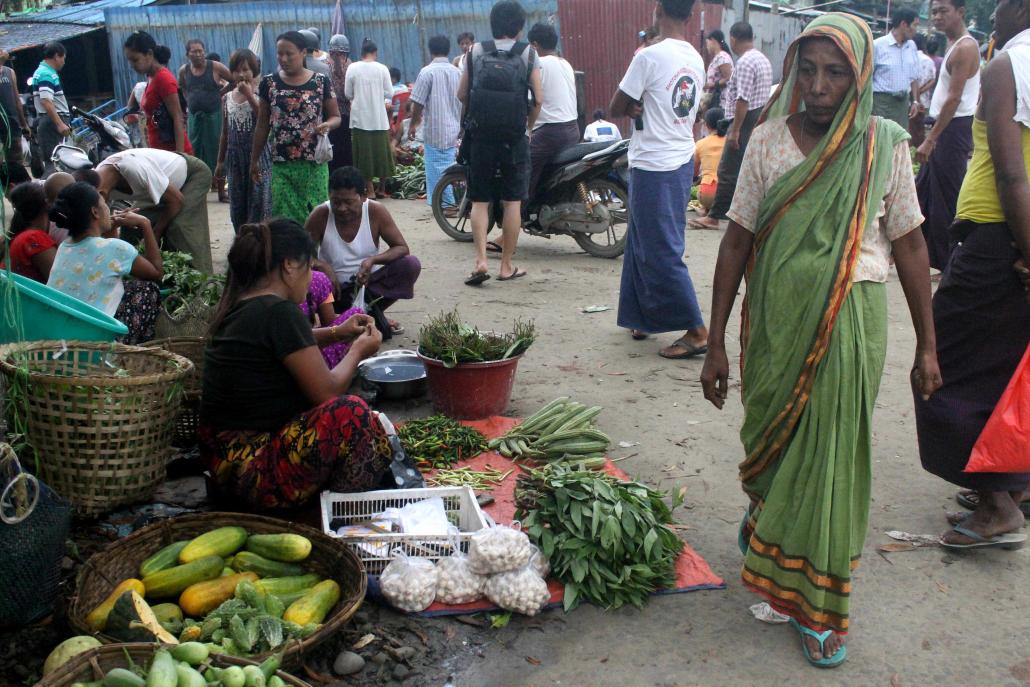 A woman walks past a vendor selling vegetables at a market in northern Rakhine State. (Nyan Hlaing Lynn | Frontier)

To do business in Bangladesh, Myanmar traders usually have to go there to arrange contracts. The traders say that the development of economic zones or trade zones with modern infrastructure and incentives such as zero tax would provide opportunities for increased trade with Bangladesh.

“There’s not much to trade between the two countries, and the percentage of Myanmar exports to Bangladesh is low, so much would need to be done to expand trade,” Shwe Maung told Frontier.

Many are hoping that the underdeveloped Rakhine economy will benefit significantly from other projects.

An agreement was signed in 2014 to develop the Kyaukphyu Special Economic Zone, on Rakhine’s Ramree Island, where China has funded an oil and gas terminal. Meanwhile, in early August India unveiled plans to back the development of an SEZ near Sittwe.

The fisheries and livestock sector also has rich potential for growth in Rakhine. However, re-development plans for the sector were disrupted by the violence that followed the attacks by ARSA in October last year.

“We made a five-year growth plan for 2017-2022 but it was ended by the crisis in 2016,” said U Nyunt Wai, the director of the Rakhine State Fisheries, Livestock and Agriculture Department under the Ministry of Agriculture, Livestock and Irrigation.

The department had been working with international partners to develop the livestock and fisheries sectors in Rakhine, but the partners abandoned the plan and their funding commitments after the October attacks.

“The international partners would have provided K143.75 billion [about US$105 million) over the five years to 2022, but our government can’t afford such an amount and we had to change our plans,” Nyunt Wai said.

After the international partners abandoned the project, the Rakhine government asked the department to change the plan to a one-year project, Nyunt Wai said. The department had also cut the project budget to K1.6 billion for one fiscal year, he said.

“But I don’t know if the project documents are on the table, or under the table at the regional government office,” said Nyunt Wai.

Rakhine State Chamber of Commerce chairman U Tin Maung Oo said activity at his businesses, which includes interests in hotels, pharmaceuticals and construction, had stalled.

“Some say that the current crisis is not affecting business in the state, but we are facing a big problem now,” he told Frontier.

Tin Maung Oo said he had accrued debts totaling millions of kyat since the attacks in October last year.

He said the Rakhine economy had been in trouble since 2012, when years of communal tensions erupted into violence.

“I think we will have to wait for the state’s economy to develop and I’m afraid it might be a wait of many years,” Tin Maung Oo said.