With the confirmation of Myanmar’s first COVID-19 cases, the sole laboratory that can detect the virus is under pressure to expand testing, but staffing and equipment remain limited.

At the National Health Laboratory in Yangon’s Dagon Township, the front line of Myanmar’s struggle to prevent a major outbreak of COVID-19, a team of busy doctors and other health professionals wear worried expressions.

The worried looks are justified. The laboratory’s limited resources – from staff to the testing kits and the machines needed to read the samples – mean that, like the overall health sector, it is ill-equipped for a large outbreak of COVID-19 in a country of 54 million people.

This is the only lab capable of testing for the coronavirus in Myanmar and it receives samples from patients being monitored for the virus by hospitals across the country. But the lab’s work represents an upgrade from Myanmar’s existing health infrastructure. Although the lab has long been able to detect a wide range of diseases, until late February all samples being tested for COVID-19 had to be sent to Bangkok.

When Frontier visited the lab on March 20, 186 countries and territories had recorded at least one COVID-19 case. Myanmar was a global outlier, the largest country by population without a confirmed case.

But late on Monday the Ministry of Health and Sports announced that two men – one who had recently returned from the United States, the other from the United Kingdom – had tested positive for COVID-19. This announcement, which sparked panic buying for groceries and medicine, came after the lab had tested about 200 people.

Government officials had earlier insisted that Myanmar was free of the virus, despite the country’s long border with China, where the outbreak started, and its lack of preventative measures.

But Dr Htay Htay Tin, the pathology professor who directs the lab, was less sure. “I cannot say there is no COVID-19 in Myanmar, but I can say that our laboratory has not yet detected any case of the disease,” she said at the time of Frontier’s visit.

Htay Htay Tin said that she and her colleagues were “really busy and stressed”. The lab has about 200 staff but only seven are microbiologists who can perform tests for the coronavirus. They work different shifts during the day and night to enable testing around the clock, and are assisted by a team of lab technicians.

“We are the only laboratory [of its kind] in the country,” she said, adding that the laboratory also had to perform work unrelated to the coronavirus. “We have to test not only for COVID-19 but for 60 kinds of bacteria and virus.” 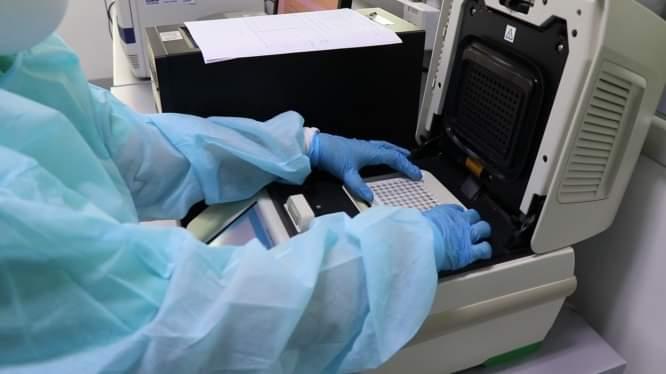 The National Health Laboratory is the only lab capable of testing for the coronavirus in Myanmar. (Ministry of Health and Sports)

Public reporting of donations from countries including Singapore and China indicates that Myanmar has around 10,000 test kits.

The lab uses an internationally common test known as RT-PCR, or “Reverse transcription-polymerase chain reaction”, to check for the coronavirus. It involves taking a swab from the palate or a nostril, from which an RT-PCR machine can produce a result in “one to three hours,” Htay Htay Tin said.

Before the global coronavirus pandemic began, Myanmar did not have RT-PCR machines to conduct the tests, but with the assistance of the World Health Organization, the Armed Forces Research Institute of Medical Science (a US-Thai collaboration) and Japan, four machines were delivered on February 20.

Htay Htay Tin said most suspected patients had been tested only once, because of the bottle-neck created by the small number of machines, but some who showed clearer signs of the disease had been retested after three, seven and 13 days.

Daw Khin Khin Gyi, a deputy director and spokesperson at the health ministry, said in a Facebook post that the two men who have tested positive were tested four times, each time returning a positive result.

The lack of confirmed cases until March 23 had generated considerable scepticism about the tests being conducted by the lab. Twelve patients have died while under medical surveillance for COVID-19, but the ministry insists they died of other diseases, such as diabetes, heart failure or tuberculosis.

Diplomatic sources told Frontier they were confident the tests conducted by the lab were accurate, and there was no cover up.

“We have no need to hide the truth; these patients died because of other health problems,” Khin Khin Gyi told Frontier.

But Dr Moe Kyaw Thu, an assistant professor at Newcastle University in Malaysia and an expert in cellular and molecular biology, said the RT-PCR could produce false negatives – when a patient is infected, but the test returns a negative reading – depending on when the sample was taken and the skill of the person using the machine.

He said symptoms can take 14 days to appear and if a patient is tested before then, the test can produce a false negative. “The time and frequency of taking samples is important to avoid false negative tests,” he said. A member of Yangon City Development Committee disinfects Pazundaung market on March 21 as part of efforts to prevent the spread of COVID-19 in Yangon. (Hkun Lat I Frontier)

Perhaps more concerning is the sheer lack of testing for COVID-19 that Myanmar has undertaken, against WHO advice that countries test aggressively for the virus.

While other countries are swabbing thousands of people a day – South Korea for instance is reported to have the capacity to test 20,000 people a day, at 633 testing sites – just 198 people had been tested in Myanmar as of March 23, with results pending for 16 others.

Under rules set by the health ministry, the lab can only test samples from suspected cases and those who have been in close contact with them. Samples can also only be sent from government hospitals and clinics, where all COVID-19 patients must be treated.

A senior ministry official told Frontier that if a confirmed case of COVID-19 was detected in Myanmar – as happened on Monday – the lab would be directed to accelerate testing.

Htay Htay Tin claimed the lab has the equipment to test “about 300” suspected cases of COVID-19 in a 24-hour period. It is difficult to imagine staff who already claim to be stretched ramping up activity to this degree on only four machines. However, U Aung Tun, an adviser to the health ministry, told Frontier that the machines are capable of testing “about ten” samples at the same time.

Ministry data shows that most of the suspected cases were from Yangon, Mandalay and Shan State, with a few from cities in Ayeyarwady and Magway regions. There had been a few suspected cases in Kayin and Kachin states and Tanintharyi Region, the ministry said.

Care is taken to ensure the samples are delivered to the lab within 24 hours, a ministry employee told Frontier, but said that most samples are sent to Yangon by road. One of the two men who have tested positive for the coronavirus, who recently returned to Myanmar from the United States, was hospitalised in Chin State, meaning his sample had to travel more than 1,000 kilometres to reach the lab.

Htay Htay Tin said that health authorities were trying to establish another laboratory in Mandalay with RT-PCR apparatus as soon as possible, to serve northern Myanmar and take the burden off the Yangon lab. However, the shortage of qualified staff looks set to persist, with the government trying to enlist voluntary help.

“We need volunteers,” said Htay Htay Tin. “Whoever is experienced in microbiology and medicine field, please come and help us.”

Clarification, March 26: This article has been updated to clarify that the laboratory was able to test for diseases other than COVID-19 prior to February, and that a team of lab technicians at assist the seven microbiologists at NHL to test for COVID-19.

TOP PHOTO: A security guard checks the temperature of a visitor at the entrance to Myanmar Plaza shopping centre in Yangon on March 20. (Hkun Lat I Frontier)