The Tatmadaw-backed opposition party has hired a team of young, tech-savvy researchers to monitor what is said about the party online.

At the sprawling Union Solidarity and Development Party headquarters in Nay Pyi Taw, a team of recent college graduates are hard at work, tracking comments and stories shared on Facebook about the military-backed opposition party.

The youthful, tech-savvy team stands out in the massive compound, where the age of party members often exceeds the country’s average life expectancy. Despite their young age, the members of this team are poised to play a greater role in the USDP’s campaign than normal; while party leaders may decry the impact of COVID-19-targeted bans on gatherings, they are also likely the most vulnerable to a disease whose risk rises with age. Campaigns in this year’s election, to an even greater degree than already expected, will be waged online.

But, from descriptions of their work that Frontier has heard, the spending may return little. What officials describe as “research” sounds a lot like cataloging negative comments about the party made on Facebook, and it is unclear how they plan to use this “research” in their campaign, short of responding individually to their detractors or filing dubious lawsuits.

The 15-member team was actually created more than four years ago but for different purposes. USDP spokesperson U Nandar Hla Myint told Frontier he helped create it after joining the party’s Nay Pyi Taw office back in 2016, as the USDP was finishing its term as Myanmar’s first elected government under the 2003 junta-drafted “Roadmap to Discipline-flourishing Democracy”. Once Daw Aung San Suu Kyi’s National League for Democracy assumed power, the team began tracking the NLD government’s handling of the economy, sector by sector, he said.

In December 2018, the team turned its focus to the coming election, writing a daily briefing on media coverage of the party for Nandar Hla Myint.

Now, he said, “the team is divided into two groups; one monitors Facebook for hate speech and fake news about the USDP, and the other monitors print and digital reporting on current issues.”

He expects the team to play a critical role in developing USDP strategy in what is expected to be a fierce campaign.

Their salaries suggest as much. Ma Zar Chi Linn, 28, a graduate of the University of Computer Studies in Yangon, said her salary doubled when she moved from the USDP youth team to the research team in January 2019. She declined to give an exact amount, but staff at the central office said research team members are paid between K300,000 and K500,000 a month, depending on their position – significantly higher wages than in other departments due to the importance of the work, they said.

Zar Chi Linn monitors hate speech for the party and helps party leaders get the blue tick that marks them as “verified” on Facebook.

“Facebook contacted us two months ago to discuss providing the verification mark for party leaders’ pages and personal accounts. The official party page was verified in the beginning of 2020,” Zar Chi Linn told Frontier in July.

But the definitions of hate speech and fake news are highly contested, and USDP officials would not offer their own, making some details of the strategy unclear. If it is simply to counter what they deem to be disinformation, there is research to suggest it may backfire.

It is also worth noting that half of the six campaigns Facebook has removed from its platform as examples of “coordinated inauthentic behaviour” – as covert disinformation campaigns are termed – were linked to the military.

The USDP was founded ahead of the 2010 election as a vehicle for former members of the military regime, using the apparatus of the Union Solidarity and Development Association, a junta-sponsored patriotic association started in the early 1990s.

Nandar Hla Myint denied that allegations made by President’s Office spokesperson U Zaw Htay at a June 26 press conference – that certain large groups had paid journalists to spread fake news stories about their rivals – applied to his party. Though Zaw Htay did not name any groups, it was widely perceived to be a reference to the USDP.

Reporters had been offered contracts worth millions of kyat to create and circulate false information, Zaw Htay alleged, warning that the government was prepared to take legal action under election laws and the Political Parties Registration Law.

“If we did this, where is the evidence?” Nandar Hla Myint said, blaming the “rumours” on NLD supporters.

“One problem is that the USDP is blamed for every problem,” he said. “If the government is certain that we are responsible, it can take action. It’s the government, after all.”

The Press Council, responding to Zaw Htay’s allegations at a July 20 press conference, called for the strengthening of independent media to help combat misinformation as the election approaches.

As for pushing content out, the USDP uses its official party page and its women’s committee page, Nandar Hla Myint said, but he declined to say how much the party spends on boosting posts from those pages.

“It is an internal party matter,” he told Frontier. “The current government is spending K6 billion monitoring Facebook, so why can’t we use our party’s budget to promote our party?”

“I also have a verified personal Facebook page and cover the cost of boosting posts on it myself; it does not involve funding from the party, and it’s the same with other party members,” the USDP spokesperson said.

The social media manager, who spoke on condition of anonymity, told Frontier he uploads posts on the party’s official pages while branch pages are run by the party’s township-level committees. He said the research team also boosts the party’s central and women’s pages.

“They spend on average about K100,000 a month per page, though in the last year it may have increased somewhat.”

He said the party also tries to get its supporters to spread information from their personal accounts and via unofficial supporters’ groups on Facebook.

“Most of the [groups] are public and very easy to join. I think research team members have joined supporters’ groups and are using them to spread information from group to group and among personal accounts,” he said, adding that the team shares content with more than 200 supporters’ groups.

There are also many seemingly unaffiliated Facebook pages that promote political parties. The pages “Competitor” and “Effective”, which are not included on the Press Council’s list of official online media, often post stories critical of the government and in praise of the military and the USDP, and the USDP often promotes these pages.

Administrators for the Competitor and Effective pages did not respond to requests for comment.

Three journalists in Nay Pyi Taw who spoke on condition of anonymity told Frontier they had heard of Facebook page administrators offering paid contracts to writers to promote USDP party pages. They say the money for the contracts is not from the party’s election fund but comes from individual member’s private accounts.

Frontier was unable to verify this rumour, but even if true, it may be for naught.

“We post and we boost, but the reach is so low. When fake news about the USDP is released, it spreads faster than our boosted posts,” said Zar Chi Linn, the computer studies graduate. “It’s so unfair.”

She believes this shows an anti-USDP bias on the part of the social media giant, who she suggested is intentionally lowering the reach of the party’s posts.

But it could be that all the money and tech know-how at the USDP’s disposal would be unable to beat back the swell of support for the party of Aung San Suu Kyi on Myanmar Facebook. After all, algorithms only imitate and amplify the existing passions of social media users. 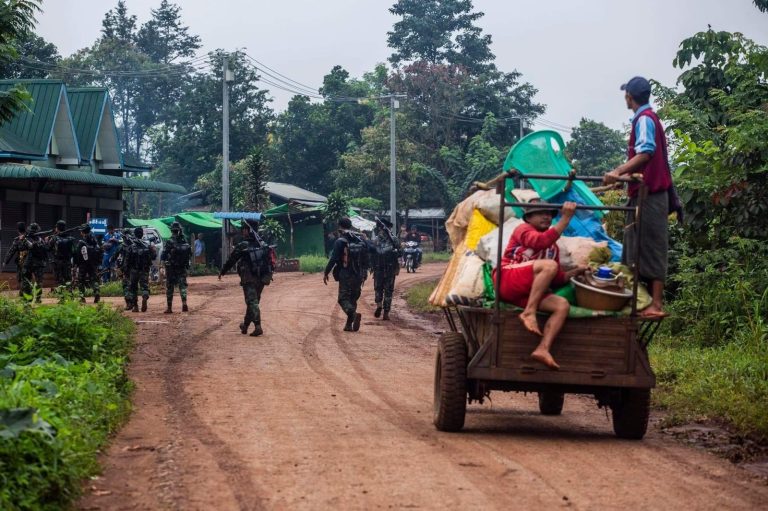 Weeks of fierce fighting erupted last month in the strategic southern Shan town of Moebye, resulting in an uneasy stalemate between the Tatmadaw and a coalition of resistance fighters.
BY Frontier