The re-drafting of build-operate-transfer contracts has raised questions about whether it’s fair to forgive some of the country’s biggest companies for contractual violations.

THE DEPARTMENT of Highways has revised build-operate-transfer highway contracts awarded by the military junta with 25 companies, including some of Myanmar’s biggest conglomerates, after discovering the roads they upgraded were substandard.

The department, under the Ministry of Construction, has submitted the revised BOT contracts to the Ministry of Planning and Finance, the Myanmar Investment Commission and the Attorney-General’s Office.

The construction ministry does not have a record of the total value of the contracts, most of which were awarded before 2011, the deputy director general of the Department of Highways, U Aung Myint Oo, told Frontier.

He said even if the department had these records, they wouldn’t be accurate.

“The military regime asked the companies to take part in these projects. They didn’t apply willingly, and they didn’t have any experience. That’s the heart of the issue,” he said.

The department said the revised BOT contracts stipulated that all highways must meet ASEAN Class III standard, which is the minimum standard for highways, and be two-lane thoroughfares at least 18 feet wide (5.5 metres). The BOT contracts were for 61 highway sections across the country with a total length of 3,264 miles (5,224 kilometres).

Aung Myint Oo said it was hard to estimate how many of the contractors had breached the terms of their contracts, and what portion of the roads they had built were subpar.

Decades of underinvestment and mismanagement have made highways in Myanmar among the worst in Southeast Asia. The situation isn’t helped by the climate, with the waterlogging that accompanies the heavy four-month rainy season undermining the foundations of roads and washing away poor paving work.

In the 1990s, the military junta began awarding private companies BOT contracts, typically lasting 40 years, in which the companies were required to build, upgrade and maintain highways in exchange for the right to collect road tolls.

Private companies now manage around 30 percent of the national highway network – more than 6,000km – under BOT terms. While this has saved government money, complaints about lack of maintenance have piled up over the years.

The Asian Development Bank, in a Transport Sector Policy Note on trunk roads published in 2016, called the template BOT contract used by the Department of Highways “deeply flawed” and “often far removed from best practice”.

“Overall, the contracts in use leave excessive room for government discretion and open-ended renegotiations. This can lead to corruption, non-transparent arrangements, multiple contract renegotiations without any clear basis for renegotiating, frequent conflicts and poor performance,” the policy note said, adding that low fixed toll rates made many of the concessions unviable, leaving little incentive an limited means to properly maintain them.

Sections of highway newly-upgraded under BOT contracts signed during the term of the U Thein Sein government, which ran 2011-16, are due to open in the coming months. These link Taikkyi with Hmawbi in Yangon Region, Kalaw with Taunggyi in Shan State, Pyin Oo Lwin with Mandalay in Mandalay Region and Myinmu with Monywa in Sagaing Region.

Seven companies are upgrading the old Yangon-Mandalay highway under BOT contracts, the department said. U Aung Myint Oo said there were fewer problems with these newer contracts, but that they needed to be revised to include clearer terms and conditions, including on the quality of the roads.

U Shwe Zin, the department’s chief engineer, said the companies had breached their BOT contracts mainly because they took on the projects without considering whether they would be profitable and had failed to properly calculate the number of vehicles that would travel on the roads.

“Based on the number of vehicles using a road each day, or Annual Average Daily Traffic, we have to decide whether we should widen a road to 18 feet, 24 feet or 48 feet,” he told Frontier. Companies in the past were solely responsible for calculating this number, which they consistently overstated.

As a result, the figures held by the ministry do not reflect the reality on the ground. 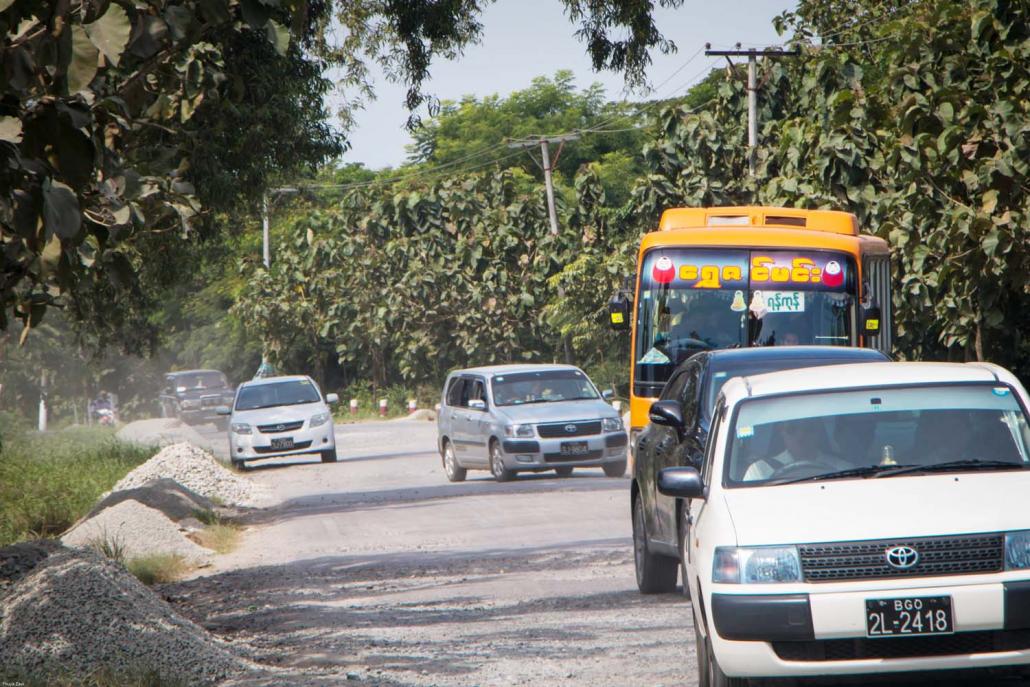 Traffic on the narrow and rutted highway connecting Yangon with Pathein, run by Oriental Highway Co under BOT terms for a decade. (Thuya Zaw | Frontier)

The Ministry of Construction has ordered some companies to postpone collecting tolls on highway sections before upgrades are completed to the required standard.

Shwe Zin and other officials repeatedly insisted in interviews that they “took action” against the companies by telling them to stop collecting tolls and focus on fulfilling their contracts.

However, some lawmakers believe the ministry has been too soft on the companies, and say it needs to take more decisive action to ensure that companies understand that the terms of contracts must be respected.

“The ministry needs to exercise close supervision over BOT contracts,” said Amyotha Hluttaw MP U Kyaw Htwe (National League for Democracy, Yangon-8). “If [companies] don’t respect the terms of the contract, the ministry should act accordingly.”

Kyaw Htwe was the first lawmaker to flag the issue in parliament, when he asked on January 26, 2018 about Zaykabar Company’s upgrade of a road section between Dala and Kawmhu, which is in his constituency.

The ministry asked the company to stop collecting tolls, because the project was not yet complete, and a group of MPs and community leaders was formed to monitor the project’s implementation.

Local residents and MPs say that after Zaykabar was told to stop collecting tolls it ceased work on the upgrade and there are unconfirmed reports of cash flow challenges.

Shwe Zin said that if companies were to honour the terms of their contracts, it “would really be a win-win situation between the government and the companies”.

Defending the principle of BOT contracts, Shwe Zin said building and upgrading roads required large amounts of capital and if the private sector did not do the work it would require funding from the government that could be better spent on other development projects.

He said most of the BOT contracts were for roads that were originally 12 feet wide and needed to be widened to at least 18 feet.

After the upgrades are completed the companies are required to inform the ministry, after which the MIC sets what is known as a profitable timeline. This determines whether the company can collect tolls for three years or five years.

The department says the revised BOT contracts will be announced in May, and it is due to award contracts for new projects in Kachin State in a few months.

Kyaw Htwe is disappointed that firmer action has not been taken over contract breaches. “The government is still hesitating to take action,” he said, arguing that contractors responsible for substandard work should be blacklisted, and those that had begun collecting tolls before projects were finished should hand the money over to the government.

“If the ministry is still avoiding taking action and is instead planning to make it easy for the companies by revising the contracts, then a question arises about whether the officials responsible are being honest,” he said.

“How can the government work in the future with these companies when they have shown that they are prepared to breach existing contracts?”

TOP PHOTO: Repair work by the Ministry of Construction on the Yangon- Pathein highway, assigned to Oriental Highways Co in 2008 but handed back temporarily to the government late last year. (Thuya Zaw | Frontier)