BEIJING — China and Myanmar agreed to a deal on a crude oil pipeline between the countries as part of a raft of agreements signed when their leaders met Monday in Beijing.

The two leaders also discussed the development of the controversial Myitsone dam, a $3.6 billion Beijing-backed project on hold since protests in 2011, Liu told reporters after the summit.

At the time Myitsone — originally designed to supply most of its electricity to China — was seen as emblematic of Beijing’s economic dominance over its southern neighbour.

China has been pressing for its resumption ever since, despite speculation that the project might be scrapped altogether.

“The two sides have a desire to advance this project in a direction that is conducive to bilateral relations and that will deliver win-win outcomes,” Liu said.

China also expressed its support for Myanmar’s efforts to maintain stability in northern Myanmar, where deadly clashes have broken out near the countries’ shared border.

“Peace and stability in northern Myanmar is not only a challenge for the Myanmar government, but also for the Chinese government,” Liu said.

Fighting between Myanmar’s army and ethnic insurgents have been ongoing for months in the Chinese-speaking Kokang region of northeastern Shan State.

The clashes have claimed dozens of lives and sent tens of thousands fleeing from their homes — many to China.

The largest and most powerful of the country’s many rebel militias involved, the United Wa State Army, is backed by China.

Observers believe Beijing holds significant sway over Myanmar’s ethnic fighters and has been angling to increase its role in the peace process there.

Xi did not directly address the conflict during his remarks, instead expressing confidence that the two countries would “forever remain good neighbours”. 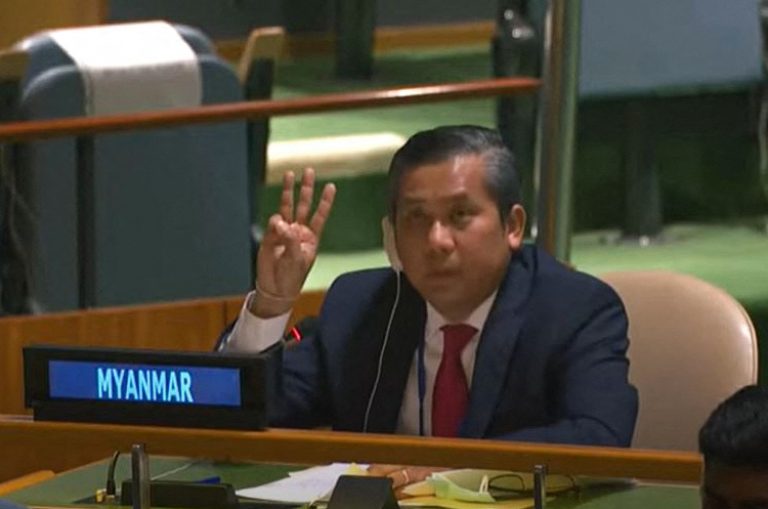 U Kyaw Moe Tun says there is an urgent need to take strong collective measures against the military regime, as the Security Council prepares to hold closed-door talks on Myanmar on June 18.
BY AFP