Ceasefire accord heralds peace, for some

Ethnic groups not invited to sign the national ceasefire are wondering how it can bring peace when it has been endorsed by only eight of 21 armed organisations.

There has been an understandably mixed response to the national ceasefire accord signed by President U Thein Sein and eight armed ethnic groups on October 15.

President U Thein Sein and participants lauded the NCA as an important step towards peace but critics said the agreement was inconclusive and suggested it was another divisive tool by a government happy to work with some groups while barring others.

From the onset, the NCA has been the ambitious scheme of a reformist government eager to demonstrate to constituents and international partners – particularly the United States and the European Union – that it was taking steps in the right direction, ostensibly to address Myanmar’s long-running ethnic crisis before the November 8 general election.

After two-years and about 300 meetings, U Thein Sein’s lofty plan seems to have come up a bit short. Only eight of 16 recognised groups endorsed the ceasefire. Amazingly, nearly two-thirds of the country’s 21 armed groups have rejected the ceasefire, or were shut out of negotiations by the government.

The difference between the NCA and earlier ceasefires – which were bilateral agreements signed by most of the 16 groups (except the Kachin Independence Organisation, which signed a truce with the government in February 1994 that collapsed when fighting resumed in June 2011) – is its promise that discussions on a framework for a political dialogue will start within 60 days. This has given hope that the long pressed demands of Myanmar’s ethnic groups will finally be seriously heard. 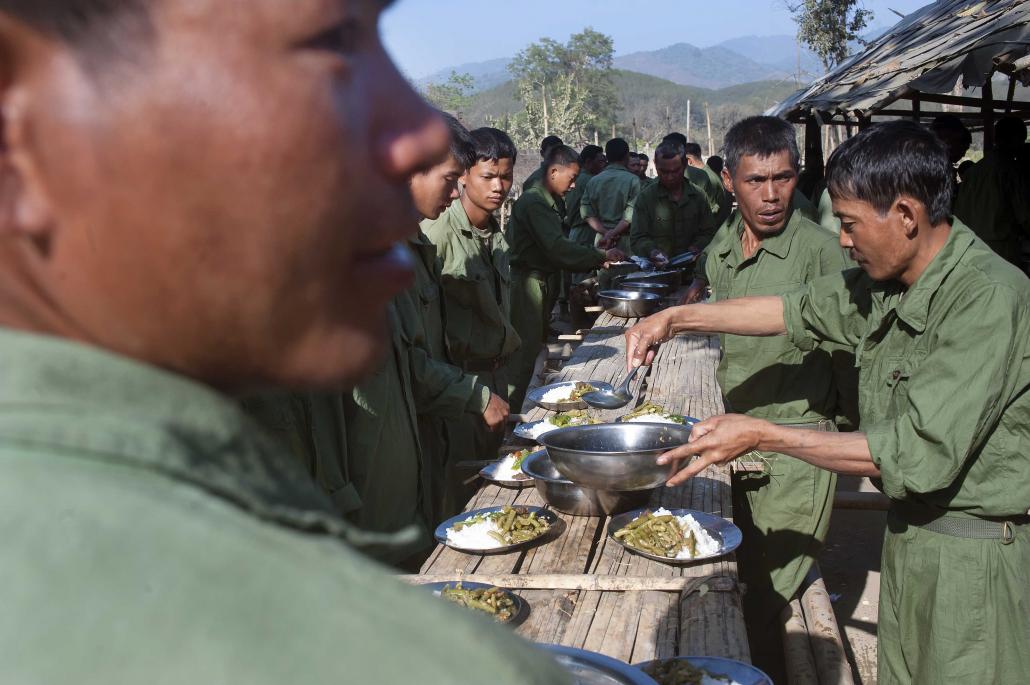 It’s a given that some of these negotiations will be done as a group, which presumably, should give them more traction than negotiating on their own. However, with nearly half the groups opting out of the NCA it’s hard to say they will have enough leverage to make Nay Pyi Taw budge on national issues of real consequence. It’s not a promising development that many of the groups that have opted out, or were not allowed to participate, are from northern areas of Myanmar where most of the continuing fighting with the Tatmadaw is taking place.

General Sumlut Gun Maw, a central committee member of the KIO, was critical of the government for not making the NCA inclusive.

“There are twenty-one armed groups in Burma right now, so the big question is when these twenty-one groups want[ed] to participate in the signing of nationwide ceasefire agreement [why was it] the government said no. They can’t accept all of the groups? So why is that? That is the big question,” Gen Sumlut Gun Maw told Frontier.

The resumption of fighting in 2011 between the KIO’s armed wing, the Kachin Independence Army, and the Tatmadaw after their 17-year ceasefire collapsed came only months after President U Thein Sein was sworn into office. KIO leaders and government negotiators have since met many times but have failed to reach a binding agreement for a lasting peace.

“Every time we have official meetings with them there is fighting,” said Gen Sumlut Gun Maw, adding that government fighter jets had attacked KIA positions two days after he participated in a meeting with Tatmadaw Commander-in-Chief Senior General Min Aung Hlaing in Nay Pyi Taw on March 16. 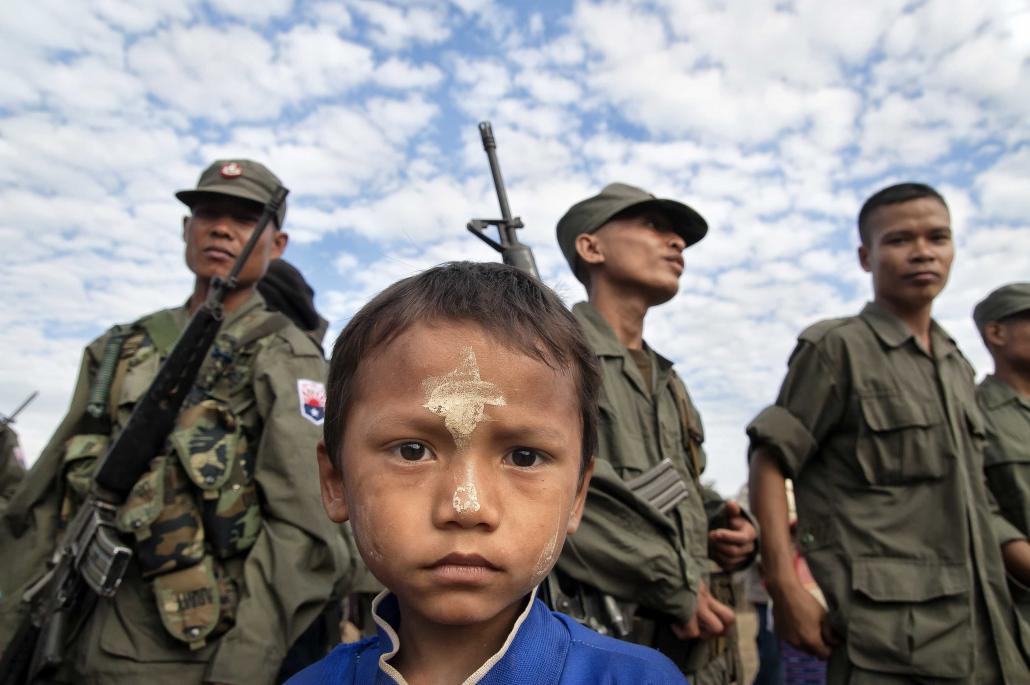 A boy is flanked by Karen National Liberation Army soldiers during the Karen National Union’s Revolution Day celebrations, at a jungle camp near the Thai border. (Brennan O’Connor / Frontier)

When the attacks took place, Gen Sumlut Gun Maw was in Yangon with a KIO delegation holding talks with Lieutenant-General Myint Soe, the Ministry of Defence representative at the ceasefire negotiations. Gen Sumlut Gun Maw said that at 10am the delegation received a message from Senior General Min Aung Hlaing expressing satisfaction with the outcome of the earlier talks but by 1pm the Tatmadaw was launching air strikes on KIA positions.

Gen Sumlut Gun Maw said he raised the issue with Lt-Gen Myint Soe, reminding him that he had conveyed Senior General Min Aung Hlaing’s satisfaction with the outcome of the meeting two days earlier and asking why “air strikes were happening right now in the KIA area?”

“There was no response from him,” said Gen Sumlut Gun Maw.

In the same week that the NCA was signed, about ten government battalions were reported to have launched a big offensive in central Shan State against the Shan State Army-North, the armed wing of the Shan State Progress Party. The SSPP is one of the 16 organisations that declined to sign the NCA unless all 21 groups were included.

More than 1,500 people were reported to have been displaced by the fighting, that affected at least six villages in four townships. The fighting stopped temporarily after the SSA-N withdrew from its river port base in Mong Hsu Township.

The offensive was condemned by ten Shan civil society groups.

“This new offensive just before the signing of Nationwide Ceasefire Agreement (NCA), Naypyidaw is making it clear that it has no interest in political negotiations to solve this conflict,” the groups said in a statement.

“It is persisting with its decades-long strategy of seizing and occupying the ethnic lands by force. In other words, the current non-inclusive NCA is just a divide-and-rule tactic to temporarily pacify some armed groups while crushing others, and will not bring peace,” the statement said.

Fighting has occurred between the SSPP and the Tatmadaw about 300 times since they signed a ceasefire in January 2012, said the Myanmar Peace Monitor, an independent ceasefire watchdog group.

Tar Parn La, who heads the foreign department of the Ta’ang National Liberation Army, a group based in northern Shan State that is fighting the Tatmadaw, said the NCA will not amount to much if it is not signed by all 21 groups.

“If they go … with just seven or eight groups, how can we stop the civil war in Burma?” said Tar Parn La. Peace “concerns the whole of Burma and involves all of the armed groups. How can we call this nationwide ceasefire? It’s meaningless,” he said.

The TNLA is one of three groups, along with the Kokang rebel group, the Myanmar National Democratic Alliance Army, and the Arakan Army, which were excluded by the government from the NCA because they are still involved in fighting against the Tatmadaw. 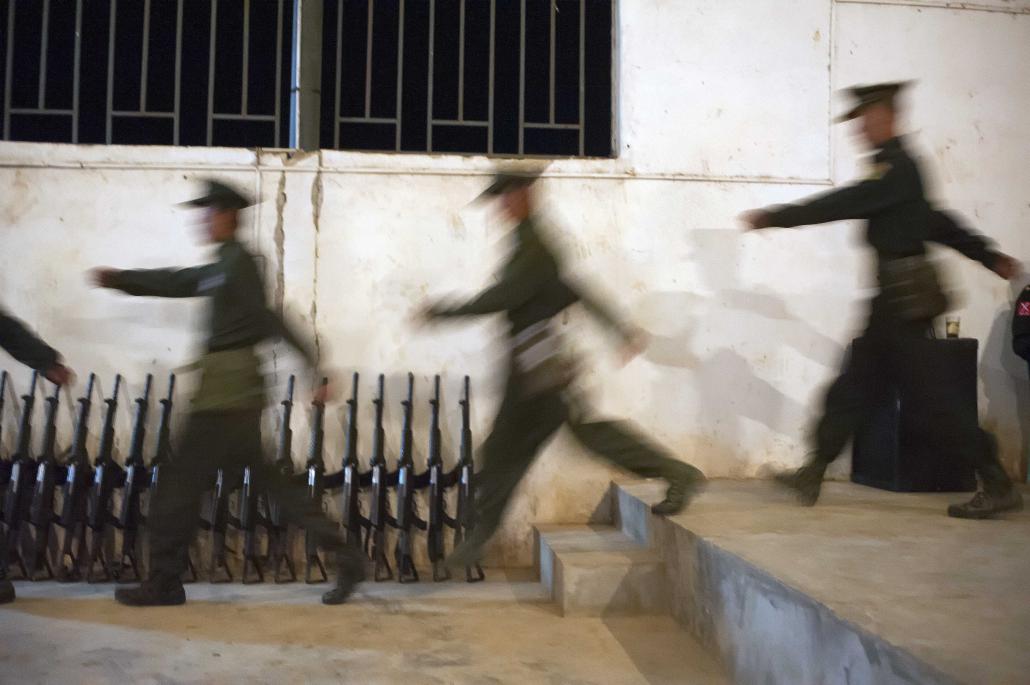 In his speech ahead of the October 15 signing ceremony, President U Thein Sein said the door would remain open for groups not yet ready to participate, but there was little indication under what circumstances this might occur.

“Although some organisations are currently not ready to sign, the government decided to conclude the NCA with the vanguard group of organisations that were ready to proceed,” U Thein Sein said. “If requested by the remaining organisations, the government will coordinate and facilitate their participation in the various stages of the peace process,” he said.

US State Department spokesperson John Kirby said in news release that the NCA is “a critical first step in a long process of building a sustainable and just peace in Burma”, but acknowledged that some groups did not sign. The release encouraged the “government to engage constructively in a dialogue with these groups to pursue a more inclusive peace”.

United Nations Secretary-General Ban Ki-moon was quoted as calling the NCA “an important step in advancing national reconciliation and consolidating the reform process in the country”.

“Although some important groups have not yet decided to take this step, today’s signing reflects recognition by leaders from the Government, as well as from the Ethnic Armed Organizations, of the people of Myanmar’s genuine aspiration to end long years of conflict and live together in peace,” a UN statement quoted Mr Ban as saying.

Ironically, the image that accompanied the UN statement was of two soldiers with the TNLA: one of the groups barred by the government from signing the NCA.