The government has announced plans to lift a ban on live cattle exports but industry sources say ordinary farmers are unlikely to benefit until restrictions on transporting cattle are also removed.

The Ministry of Commerce plans to remove cattle from a list of banned exports issued under the 2012 Major Commodity and Service Law, officials told Frontier recently.

A spokesperson for the Livestock Breeding and Veterinary Department, which is working with the Ministry of Commerce on the policy change, said a one-year trial of live exports was planned.

The government is drafting a live cattle export policy that will set rules and regulations for the trade. The spokesperson said one likely rule is that the cattle must be at least five years old to be eligible for export. The policy will also address issues such as tax, health status and verification of ownership.

The official said the government had received many offers from foreign countries, including China, to buy live cattle. Further negotiations would be required to enable formal exports, said the spokesperson, who asked not to be named.

“We are discussing the details of an agreement now with China,” she said. “When the trade becomes legal, farmers will benefit and the government will get tax revenue.”

Dr Ye Htun Win, director general of the Livestock Breeding and Veterinary Department, told local media last month that the government would allow traders to export up to 100 cattle at a time. 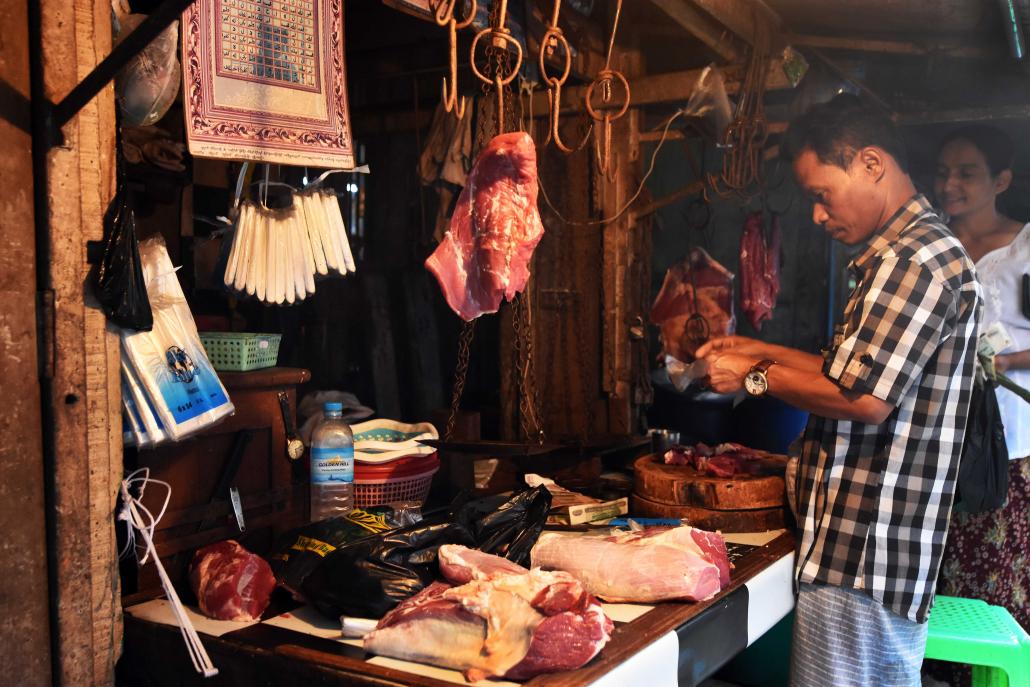 A beef seller in a Yangon market. (Steve Tickner | Frontier)

On October 27, government and private sector officials met to discuss the live exports issue further, including the need to lift restrictions on transporting cattle.

“Cattle are still on the list of restricted export items. The government has to lift this order – if not then this change will not benefit ordinary people,” said Dr Kyaw Htin, vice chair of the Myanmar Livestock Federation.

“I think this decision is better than to loan money to the poor people. Because the price of cattle in the local market is just between 500,000 to 100,000.When the border market opens it will go up five times” said Dr. Kyaw Htin

Market sources say legalising the market will earn revenue for the government from export taxes and enable cattle traders to make a living without breaking the law.

“Legalising cattle exports is a very good decision,” said livestock trader U Min Soe, who has a farm in Bago Region and has been trading cattle for around 20 years. “There is a big market near us,” he added, referring to China.

Despite the ban, cattle were smuggled abroad illegally for decades. The ban on cattle exports was strictly enforced from November 1999 but had been in place for many years previously. The junta banned exports to ensure that the country’s rural-based economy was not affected by a shortage of draught animals and because it did not want meat prices to rise.

Because of the ban cattle farmers have had few options for buying and selling other than breeding or supplying butchers.

“Farmers either have to keep cattle that they are not using or sell them at a low price, because they have no alternatives,” said U Mya Htwe, a farmer at Ngapudaw Township, Ayeyarwady Region, who owns five buffalo.

Livestock Breeding and Veterinary Department figures show Myanmar had nearly 15 million cattle in 2013 and had experienced compounded annual growth of 2.4 percent from 2000 to 2013.

More recent data from the Ministry of Agriculture, Livestock and Irrigation statistics shows that as of 2016-17 there were approximately 17 million cows, 7.9 million goats, 3.8 million buffalo and 1.6 million sheep. 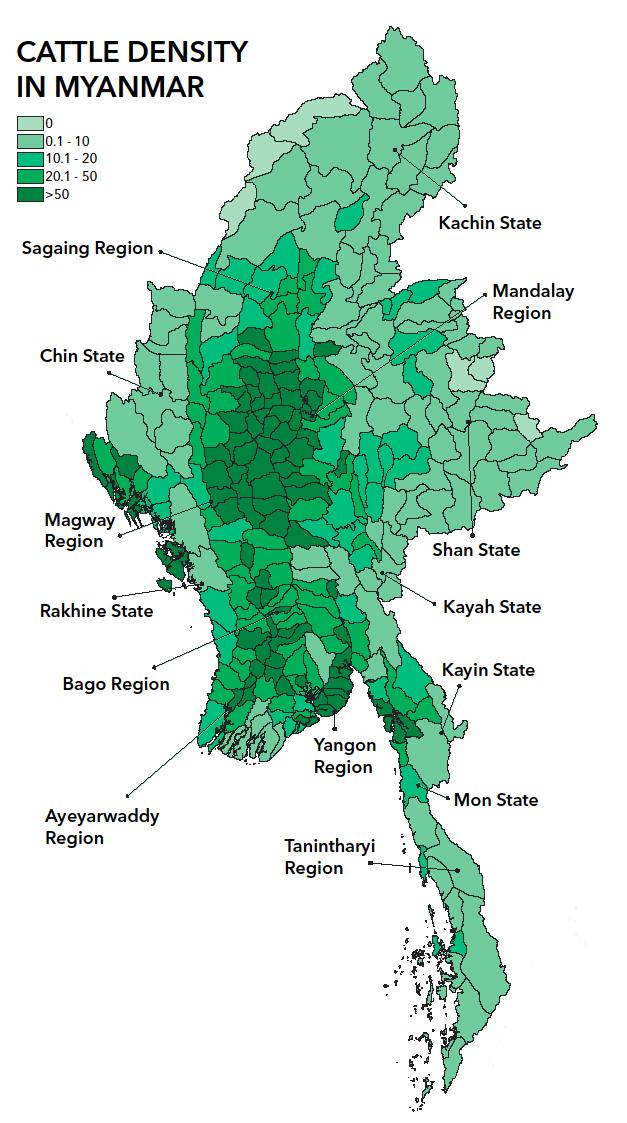 But in recent years informal live exports have increased notably due to growing demand in China and Vietnam, where prices are much higher than inside Myanmar, according to researchers. In 2013, Thailand’s Office of Agricultural Economics reported that the country imported 204,000 cattle from Myanmar.

In a paper prepared for a 2015 workshop on beef markets and trade in Southeast Asia and China, local and foreign researchers said that cattle prices in Myanmar were significantly lower than neighbouring countries and this was the main force driving “unofficial exports”.

“If export policies are liberalised, Myanmar has huge potentials to develop backgrounding and fattening systems based on local and imported cattle as the country has a vast land area which could be used as grazing of animals,” they wrote.

Cattle being moved across state and region borders without permission are liable to be seized. Local media reported regularly on police arresting cattle smugglers across the country, but particularly along the border with China. However, smugglers can evade the authorities through the use of fake documents or by paying bribes.

Restrictions on domestic slaughtering have also dampened domestic cattle prices. Cows under the age of 13 cannot be killed for meat, unless they are disabled or sterile.

Since 2012, butchers’ licenses have been auctioned each year by municipal authorities for large sums amid fierce competition. One licence is auctioned in each township, effectively giving the licence-holder a local monopoly.

“Those who bid K300 million or K500 million for the licence at auction are not really paying [money] themselves; it’s the consumers who pay. Those awarded licences are merely making a temporary payment on behalf of consumers,” said Min Soe.

Because of the restrictions on movement and the influence that a licence gives them over a market, butchers have traditionally been able to buy cattle at low prices and sell at high prices.

The introduction of a competitive tendering system would bring fairer competition in the meat trade, U Aung Myint Tun, a member of the Nay Pyi Taw Council, told the Pyithu Hluttaw in late June.

Aung Myint Tun was responding to a question from U Aung Hlaing Win (National League for Democracy, Mingaladon), who asked why butchered meat prices were much higher than cattle prices.

The annual licences were not subject to any competitive bidding until 2012-13, Aung Myint Tun told MPs. “It [the previous system] was lucrative as it allowed one person to bid a maximum, non-competitive price and allowed him to monopolise the meat market,” he said.

However, it is unclear whether the government plans to liberalise the licensing process for slaughterhouses.

Although livestock traders have welcomed the legalisation of exports, they say more reforms are needed.

Strict regulations apply to transporting cattle and doing so without permission is an offence. The transport of cattle is only allowed under limited circumstances, such as to send animals to another farm, and requires permits from five government agencies, including the Myanmar Police Force and the departments of agriculture, and livestock breeding, as well as village administrators.

Deputy Minister for Home Affairs Brigadier-General Kyaw Zan Myint told the Pyithu Hluttaw in 2014 that a farmer could only transport two draught cattle at a time. He said the current rules state farmers were unable to transport the same cattle “many times” – ambiguity that sources say has facilitated corruption.

The maximum penalty for transporting cattle without the necessary documents under the 2012 Major Commodity and Service Law is a prison term of three years and a K500,000 fine.

U Htet Thu Aung, deputy chairman of Mandalay Region Cattle, Sheep and Goat Raising Association, said the clause in the 2012 Major Commodity and Service Law that bans farmers from transporting cattle should be abolished.

“Farmers cannot benefit, that is why we want changes to the 2012 Major Commodity and Service Law. It has not changed the situation for the people at the bottom,” he said. 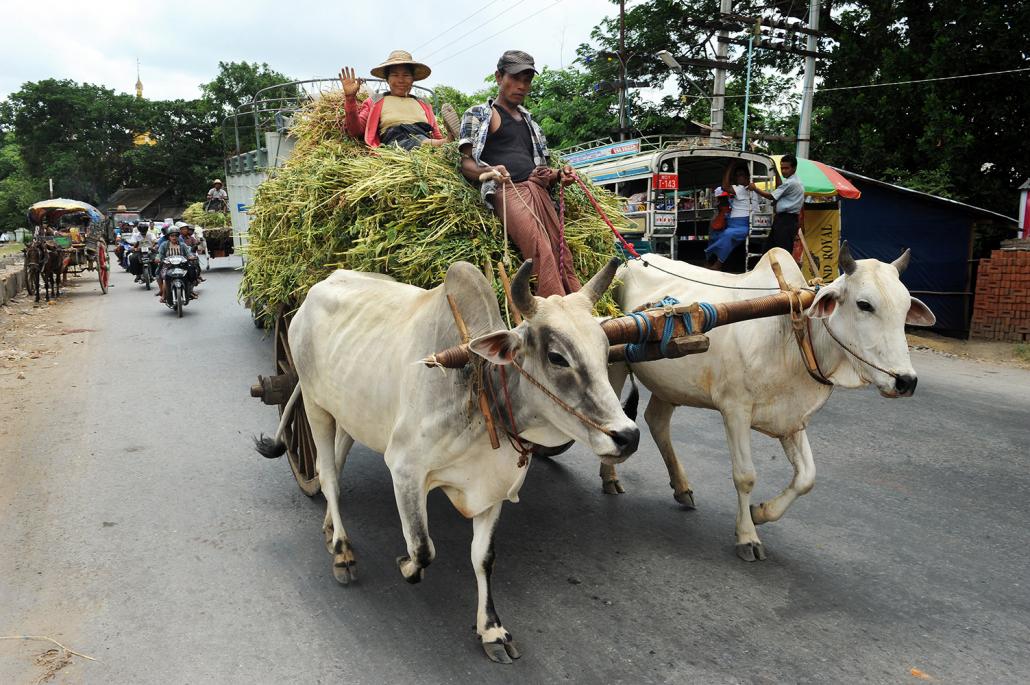 Although live exports had been banned, the sale of frozen beef to foreign markets was allowed in recent years. Government figures show 45,000 tonnes of frozen beef was exported to China and Southeast Asian countries between 2009-10 and 2012-13, earning about US$135 million (about K182 billion).

Export licences for frozen beef were halted in July 2012, but smuggling continued. Between December 2012 and October 2015, the Ministry of Commerce says it seized about 180 tonnes of illegally exported frozen beef worth K706 million.

Exports were halted shortly before the Pyidaungsu Hluttaw passed the Major Commodity and Service Law, which banned cattle exports.

The likely increase in market demand for cattle after the export ban is lifted has raised concern about a potential shortage of draught animals for agriculture and transportation.

Millions of farmers rely on draught cattle to till their land: the 2014 census showed that one in five people use cattle or horses for farming and transportation.

“The export of draught cattle and cows of reproductive age should be avoided,” said Min Soe.

“Farmers are worried about a shortage of draught cattle. If they can make a profit, breeders will increase the size of their herds. It is important to find balance in the market.”