Can the USDP rebuild its reputation?

Beset by internal conflict for the past year, Myanmar’s former ruling party is seeking to wipe the slate clean ­– by removing any trace of the Shwe Mann faction from its leadership group.

THE Union Solidarity Development Party’s leadership is seeking to plot a way back from the political wilderness, with a party conference expected to usher in a series of personnel changes.

The conference – originally slated for January, and then repeatedly pushed back – began this week.

It comes at a crucial time for the USDP, which saw its commanding majority from the 2010 election, when it won more than three quarters of all seats, demolished by the National League for Democracy last November.

The party ended up with just 41 representatives in the Pyidaungsu Hluttaw, which has 498 elected representatives, and most of its biggest names lost their seats.

Spokesman U Khin Yi told Frontier on August 11 that the USDP leadership planned to “reform” the party by ensuring positions of authority were assigned to qualified and respected members.

“The policy … does not need to be reformed for the time being,” said the former minister for immigration and population, who ran for and lost a seat in Ayeyarwady Region at the election.

“But the people [in the party] need to be reformed. This will be done based on merit.”

Asked whether former military officers would continue to lead the party in the future, Khin Yi – a former general who headed the police force until 2011 – declined to comment.

However, he said a major reorganisation of party committees at the ward and village tract, township, and state and region levels had commenced in May. The focus is on injecting new blood into the party and making these committees more representative of their communities. As a result, they contain new members, women, ethnic minorities and members of a wide variety of ages, Khin Yi said. There are now also more civilians than ex-officers involved in these committees, he added.

“To the best of my knowledge, many civilians have been assigned. Some of them have been appointed in their native towns. Some are assigned in places where they were born and brought up. Some are academics. I don’t see so many [military] veterans.”

Khin Yi said such reforms were important for the “survival” of the party following its “failure” in the 2015 election.

The party does still have a rump of public support – despite winning just 30 seats, or 6.8 percent, in the lower house, it received more than 6.3 million votes, or 28.8 percent of the total. It makes up the largest bloc in parliament outside the NLD and military.

However, it has failed to translate its presence into an effective opposition movement, with the NLD and ethnic parties dominating parliamentary proceedings.

The USDP is unlikely to be able to challenge the NLD in any serious way until the internal conflicts that have wracked the party for years are resolved.

Over the past five years, former President U Thein Sein and former parliament speaker Thura U Shwe Mann have staged a running battle for control of the party. While Thein Sein was officially the party chairman, constitutional provisions meant he could not hold the post during his term as president, so Shwe Mann served as acting chair.

However, his defiance of the government and military prompted Thein Sein to forcibly wrest back control of the party. On August 12, police descended on the USDP headquarters in the middle of a party conference. Shwe Mann and his allies were deposed from their leadership positions, replaced by Thein Sein acolytes.

The dispute overshadowed the USDP’s election campaign and arguably hurt its chances, with Thein Sein’s use of force providing voters with a stark reminder of its military roots.

In late April, Shwe Mann and his allies were formally expelled from the party due to their links to the NLD government. Some have taken up minister posts, while Shwe Mann heads a legal reform-focused commission attached to the parliament. They have regularly claimed their expulsion was against party rules. 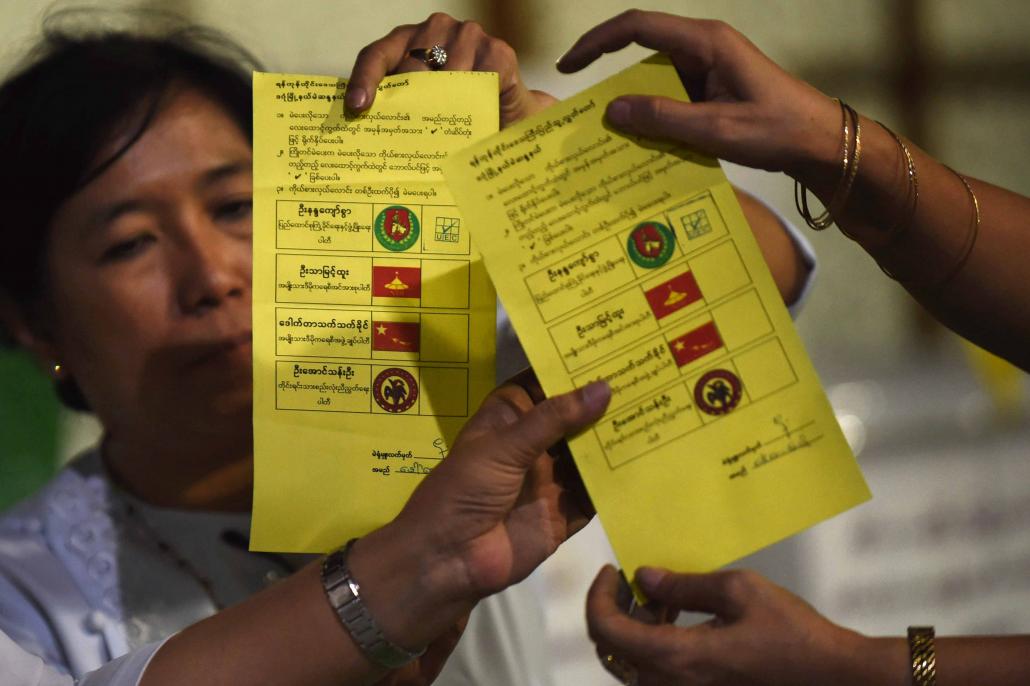 U Zaw Myint Pe, a former CEC member deposed together with Shwe Mann, dismissed any suggestion of reform taking place within the USDP under the current leadership.

He said the sackings in April had “damaged the party” because the Thein Sein group had violated its rules.

“The CEC members selected by the first USDP conference were informed of their dismissal with just a one-sentence notification. They weren’t given any reason,” he said.

“[The current leadership] does not care about the interest of the people. It is ignorant of the party members. They think that if they talk, everyone must believe what they say … The USDP will never regain power unless these [behaviours] change.”

Speaking ahead of the one-year anniversary of the August 2015 raid, however, Khin Yi insisted that the events that took place were “in accord with the law”.

“Let me say clearly: it was carried out according to the party’s rules,” he said.

Political analyst U Myat Ko, executive director of the Yangon School of Political Science, said the USDP needed to change to become electable. However, he questioned whether the old guard currently in charge could implement the reforms needed.