AT 1:30pm on weekends and public holidays, the Yangon Zoological Gardens puts on an animal show. It costs an extra K200 on top of the zoo entry fee of K1,000 to see monkeys dressed in football kit forced to perform tricks, snakes made to dance, and elephants walking in circles with their trunks and tails intertwined. The elephants also climb on tiny stools, dance and score football goals.

On Saturday, February 8 the show attracted an audience of about 100 people, who applauded the “tricks” performed by the animals.

The performance appears at odds with a sign that greets visitors to Myanmar’s oldest and second-largest zoo and reads: “Promote animal rights and welfare”. 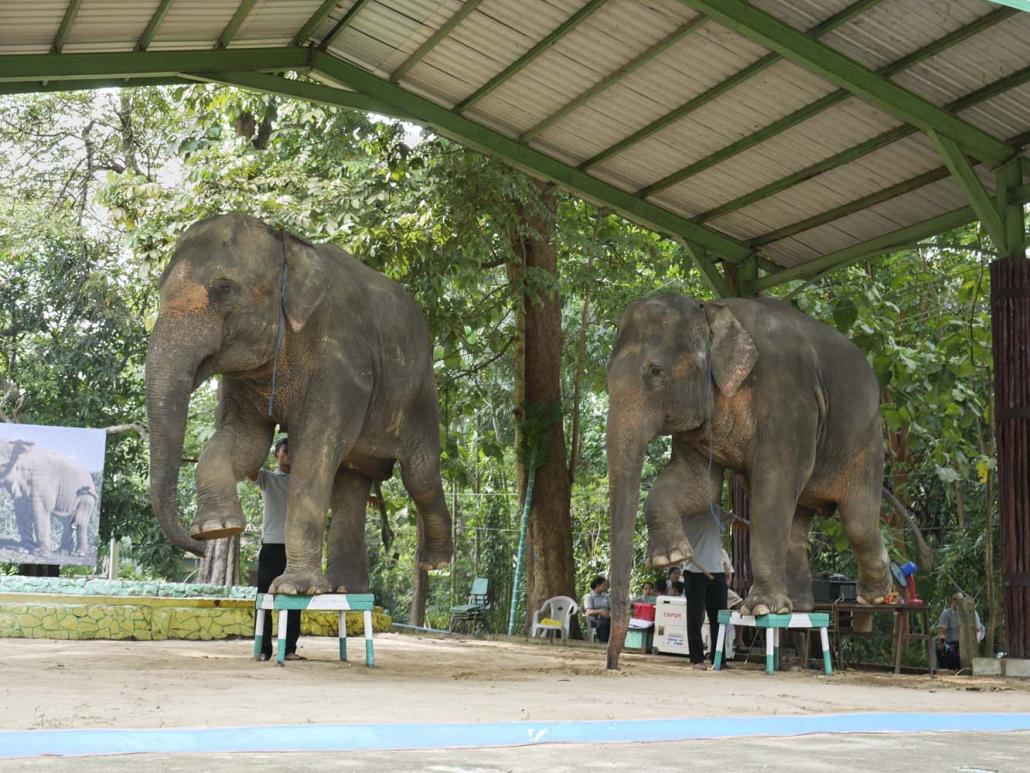 These elephants face the prospect of spending their lives confined to a small concrete platform while visitors thrust bamboo shoots at them. (Abigail Upton | Frontier)

Nevertheless, the shows are a major part of the Yangon zoo’s appeal and what makes it such a popular destination for families with young children. The zoo attracts about 1.4 million visitors a year, according to a pamphlet distributed to visitors, many of whom come not just for the performances but also to see the cages or enclosures containing bears, elephants, tigers, lions and monkeys.

Daw Aye Myint, from Thaketa Township, who was accompanied by her four-year-old granddaughter, said the extra K200 to see the animal show was well worth it. “We usually come once every two months. We see the magic show, before the animals perform, and the animals playing football,” she told Frontier. “My granddaughter is entertained by them.”

The zoo has more than 133 species of animals, along with more than 200 species of trees and a natural history museum. It promises to provide an educational experience for visitors, but apart from simple explanatory signs at animal enclosures and a museum with basic displays, there is little evidence that those who run the zoo are dedicating resources to either education or the promotion of animal rights. 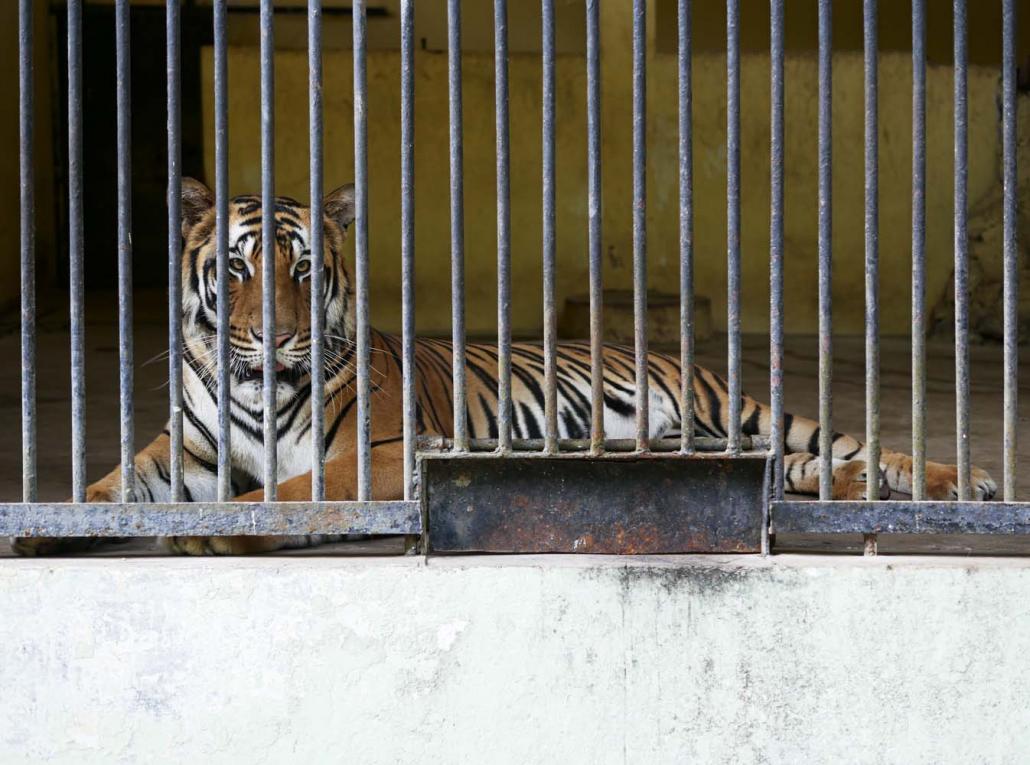 Tigers usually roam over vast areas in the wild but this big cat at Yangon zoo is confined each day to a small, unstimulating concrete enclosure. (Abigail Upton | Frontier)

The zoo, which is owned by the Forest Department under the Ministry of Natural Resources and Environmental Conservation, has been managed since 2011 by the Htoo Group of Companies, which also manages the zoological gardens at Mandalay and Nay Pyi Taw. The management contract for Yangon Zoological Gardens expires later this year.

U Aung Ko, an elephant keeper and trainer, said the animal shows had been performed long before the Htoo Group took over the management of the zoo. “The animal shows began when the zoo was government property; we will continue to train the animals for the weekend shows,” said Aung Ko, who works for the Ministry of Natural Resources and Environmental Conservation but comes to the zoo on weekends to take part in the shows. 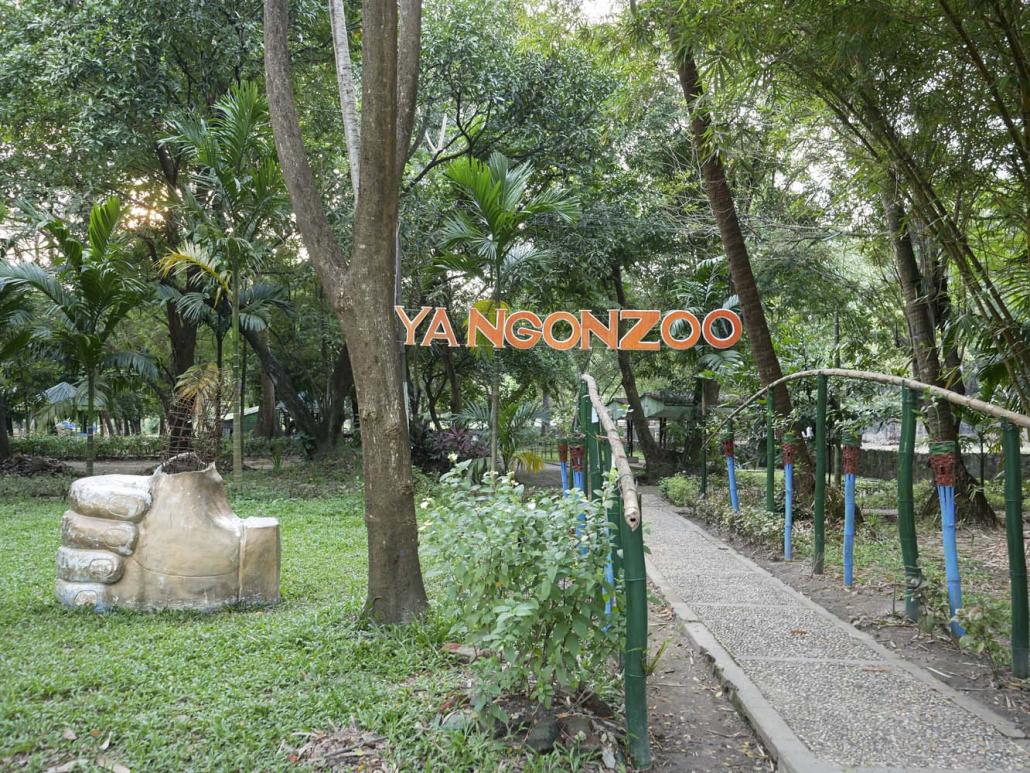 Some changes have been made for the sake of animal welfare, including the closure of most stalls selling animal snacks a few years ago and the erection of signs warning visitors against feeding the animals, who are given meals by zoo keepers twice a day. However, visitors continue to feed the animals food produced for human consumption, such as biscuits and milky drinks, as well as bread and vegetables carried into the zoo in plastic bags. The discarded plastic litters the enclosures.

Meanwhile, stalls selling sugar cane near the elephant enclosures have apparently been allowed to remain. One woman who sells sugar cane at the zoo said she was not concerned about the animals developing eating disorders. “People usually come and feed them constantly almost every day,” she told Frontier. 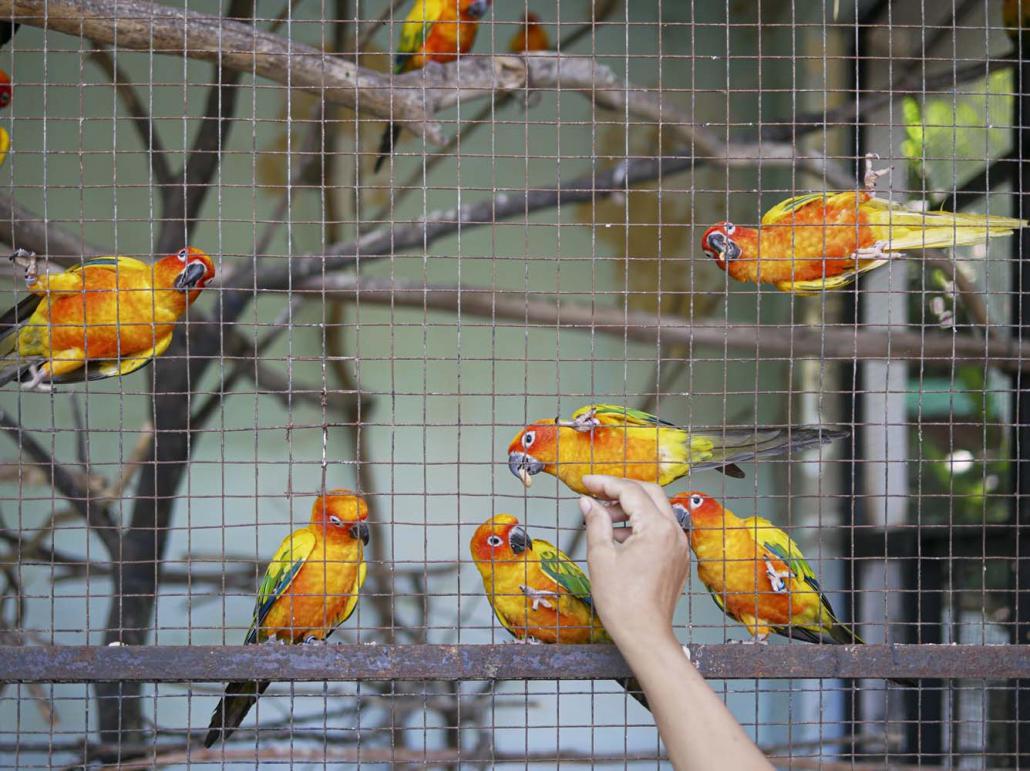 One of the arguments against zoos is that animals in captivity suffer from boredom and stress. Although the Yangon Zoological Gardens covers about 58 acres, the enclosures for many animals are cramped. Much of the space is instead devoted to human entertainment and eating; the grounds include a playground, restaurants, pedal boats, a zip line installed nearly a year ago, and a climbing wall. Food and gift stalls line the paths, blasting loud music.

Dr Chris Draper, the head of animal welfare and captivity at international wildlife charity Born Free, told Frontier in December 2019 that enclosures at the zoo were “almost universally barren and wholly unsuitable for the animals”. 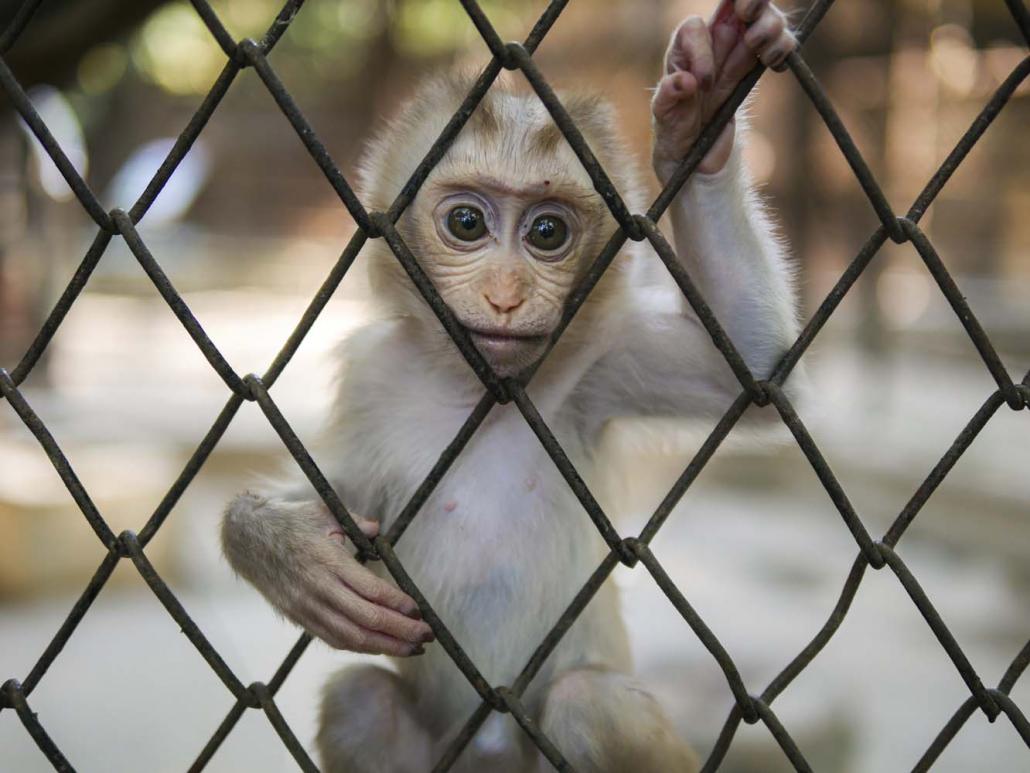 This baby monkey, being kept apart from his mother in a small cage at Yadanabon Zoological Gardens in Mandalay, repeatedly bangs his head with his fist. (Abigail Upton | Frontier)

He said Yangon and Mandalay zoos are “woefully outdated and subjecting their animals to little short of cruelty. Something needs to change urgently, and the government of Myanmar has a responsibility to take swift action to prevent this abuse.”

There was “distressing evidence of abnormal, repetitive behaviours exhibited by some of the animals, particularly the bears,” Draper said. “This is almost certainly the result of their inadequate living conditions.”

Elephants shackled to chains and being ridden, monkeys forced to perform tricks, sensitive, intelligent young apes kept in tiny cages alone, bears pacing and endlessly sucking their feet, were “images of horror that should be consigned to history”, he told Frontier.

Attempts to contact Htoo Group of Companies were unsuccessful. 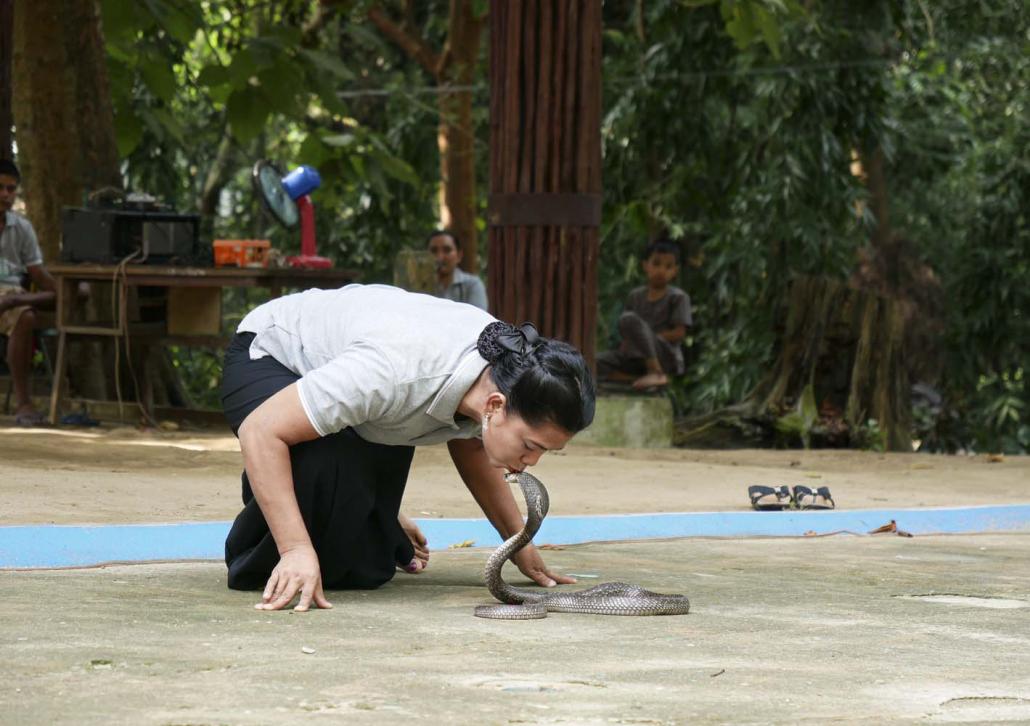 Animal shows have long been a part of the Yangon zoo experience, and are among its biggest drawcards. (Abigail Upton | Frontier)

But Aung Ko, the elephant keeper and trainer, insisted that the animal shows would go on, and that the zoo would continue to make “improvements” to the performances.

“The elephants are trained twice a day every day for the performances,” Aung Ko said. “We are also planning to train the smallest elephant to hold the welcome bouquet that is presented to the crowd.”

TOP PHOTO: With no greenery in sight, this gloomy, concrete cage is a far cry from the lowland tropical forests in Southeast Asia that are the natural habitat of Sun bears. (Abigail Upton | Frontier) 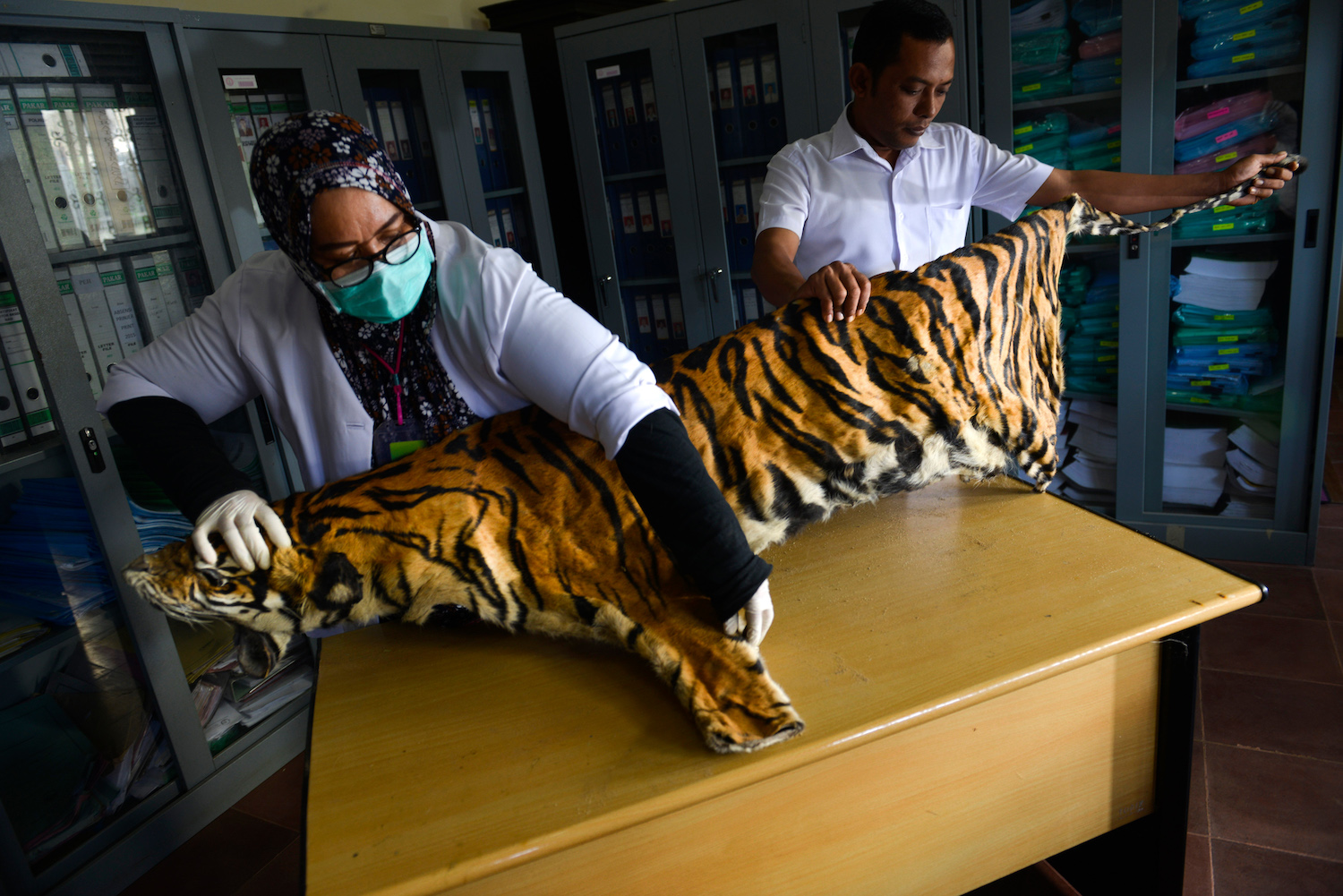