WHEN HE opened Sittwe’s first Public Hearing Forum, in November 2016, Rakhine State minister U Kyaw Lwin highlighted the importance of access to government information and having a “positive approach” in order to address community needs.

“I will listen to the voice of the people and will try to respond to people’s needs with the relevant MPs and their departments,” said the minister, who holds the agriculture, livelihoods, forestry, fishery and mining portfolios.

Very soon, he was challenged to deliver in disputed land ownership claims.

Ma Shwe Nwe, from Ohn Taw village tract in Kyaukphyu Township,  said she represented farmers who had been “waiting for years” for land registration certificates after submitting and paying for their land-use certificates, commonly known as “Form 7” applications. Kyaw Lwin promised to follow up on their behalf.

For 14 months, until March 2017, Oxfam and its partners – Scholar Institute, the International Commission of Jurists and Earth Rights International – worked with 68 Kyaukphyu Township communities and government leaders preparing them to communicate with each other more effectively. They equipped villagers, civil society organisations (CSOs), members of parliament and government officials with skills to resolve community development issues in collaborative and constructive ways.

The cornerstone for successful dialogue was the relationship of trust that Scholar Institute established with the participants. First, communities selected the issues they wanted to resolve most urgently. Scholar Institute then presented their questions to government leaders and officials, so they were forewarned, informed and could respond openly to public questioning. It also helped leaders understand the impact of their decisions, as villagers’ sought resolution to a range of issues such as land rights, poorly constructed embankments and access to education funds.

For most residents of Kyaukphyu – rural and urban – this was the first time that had been able to engage with their members of parliament and local government officers.

Saw Pu Chay, a leader of the Kyaukphyu-based Rakhine Women’s Union, used the opportunity to question the head of the Township Municipal Affairs Committee  about the transparency of tax collection at the Kyaukphyu municipal market. Speaking in front of 107 Kyaukphyu community leaders, including 20 officials from seven government departments, Pu Chay said she spoke on behalf of marginalised street sellers.

“I represent vulnerable women from our communities. Street venders are mostly poor women from women-headed households, or their husband’s income is not enough to feed their families. Their voices are neglected,” said Pu Chay, as she asked if the municipal tax was official. 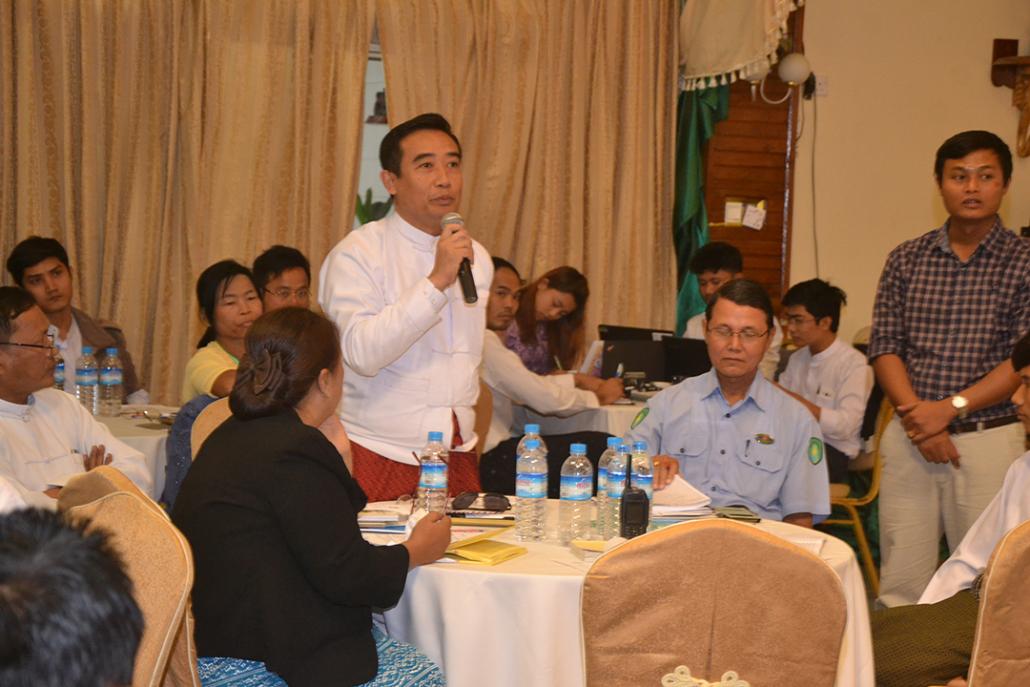 Rakhine State minister U Kyaw Lwin used the first Public Hearing Forum to highlight the importance of access to government information and having a “positive approach” in order to address community needs. (Tat Lan)

The head of the Municipal Department said he would investigate the selling of open market spaces for K80,000 and assured all participants that every tax payment must be invoiced. He invited those at the meeting to complain if tax collectors did not provide invoices and committed to following up on the issue.

“Whenever the authorities come to the village, they meet with village elders and school committees, but community members are not included,” Pu Chay said. “Now, I am satisfied that my voice was heard, though they may need time to solve the issue.”

Through the Tat Lan programme, 690 officials – from the departments of rural development, agriculture and fisheries – have visited villages to speak with community members and respond to their questions. Government staff have participated in livelihood trainings and are being prepared to take over Farmer Field School agricultural activities, and infrastructure, nutrition and fishery initiatives when the Tat Lan programme ends in December 2018.

This consultation and knowledge sharing has helped break down barriers and pave the way for effective, cooperative working relationships in Rakhine State’s Kyaukphyu, Myebon, Minbya and Pauktaw townships. Further, Scholar Institute’s trainings in social accountability, leadership, advocacy and gender attracted 7,724 participants, who learned how to mediate, negotiate and facilitate in a conflict-sensitive manner. The trust gained in these sessions enabled the minister for agriculture, Kyaw Lwin, to advocate for community access to government information.

“People should know about the government’s work plan, budget and procedures,” Kyaw Lwin said to the forum participants. ”It is paramount that we share laws and positive approaches to solve community needs and problems. We are the people’s government. I am ready to support the people as much as I can.” 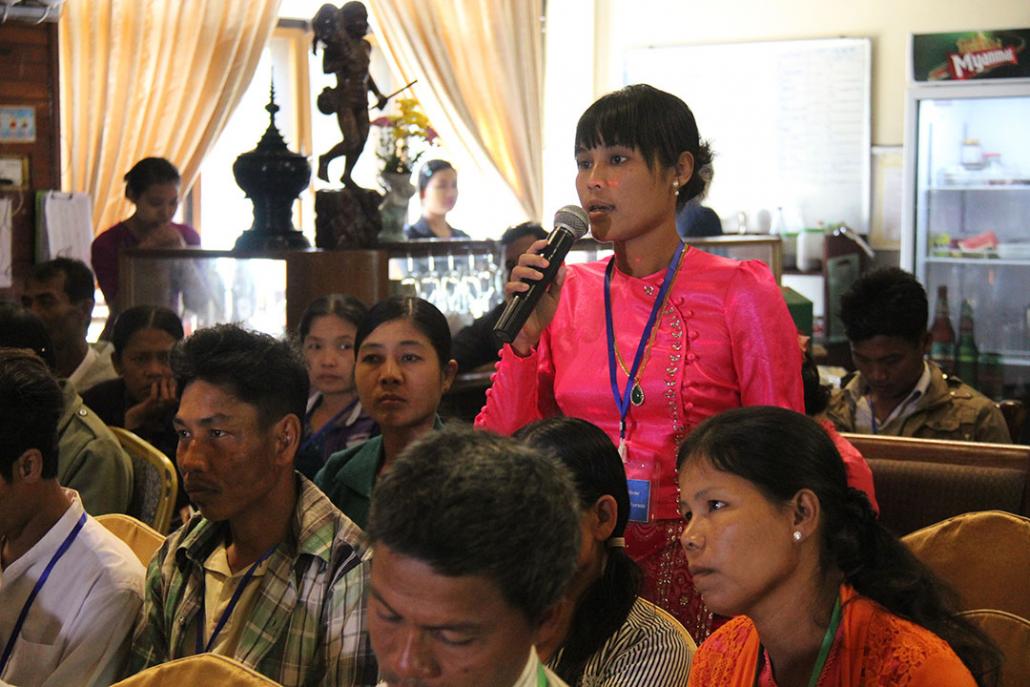 Ma Thet Yee Win, a Ten Household Leader in Ohn Taw village, speaks on behalf of children asking the Education Department for a middle school with laboratory materials for students in her village. (Tat Lan)

Scholar Institute governance coordinator U Tin Aung Ko says the forums are an opportunity to build positive relationships between the government, members of parliament and the public so they can work together for the development of their communities.

“It is important that the public are informed and issues happening in the community are raised with government departments. We need cooperative engagement to solve problems.”

This point of view was endorsed by the Advisory Commission on Rakhine State, led by former UN secretary-general Kofi Annan. In its final report in August, the commission recommended quarterly township-level civil society meetings, which should be attended by local administration  representatives and members of the State Parliament . They suggested these meetings should “gather detailed feedback from communities and civil society” on the design of state level policies.

At the second Public Hearing Forum this January, Kyaw Lwin reported that the Settlement and Land Record Department completed the land registration process for the Ohn Taw farmers and provided them with land ownership certificates. Participants also heard that the Kyaukphyu Municipal Department had ceased collecting the market tax from street vendors. Faulty embankments have been rebuilt and villagers are negotiating with the Department of Education to fund schooling needs in their communities.

Reporting on the public hearing forums, Oxfam said they demonstrated a change in direction among the more progressive Myanmar government departments and revealed their ability to engage in more consultative and closer relationships with communities. Many participants said that “Tat Lan broke the silence”, Oxfam concluded.