I have never seen a grown man look as bored as Oliver while he was playing Dungeons & Dragons.

IT WASN’T just boredom, it was deep boredom; the kind of tedium that not only makes one daydream, but daydream about alternate life choices that wouldn’t have led a grown-ass man to spend a Tuesday night pretending to be a Dark Elf thief.

“You want some, uh, whisky?” I ventured.

It had been two real-world hours since Frontier chief-of-staff Oliver Slow (a.k.a. Wols, thief for hire) had decided to join an unlikely band of adventurers to rescue the young Priscilla Wester from the evil wizard Glassstaff – a pulpy narrative lovingly crafted with Old West desperados, giant spiders, a mad necromancer and the ghost of his dead lover.

I was the narrator, the “Dungeon Master”, a bit like Anthony Hopkins in HBO’s hit series “Westworld”, except instead of a futuristic theme park populated by A.I. robots, my game used paper charts, 20-sided dice and tiny figurines that certainly aren’t glorified plastic army men. (Army men don’t cost US$10 each.)

It’s fun. Unless it’s not. But by the time we got to that point, there was no going back because I had got my friends from the game club to come, and I needed to save face with the nerds.

Not that Oliver didn’t enjoy himself at all, at least at first. For example, he seemed to take a real joy in choosing to join the outlaws as they savagely beat an old man begging for mercy.

But perhaps he didn’t realise it was going to go on for, like, three hours. And as the make-believe conversations and methodical, turn-based combat wore on, his smooth-talking, old-man-kicking thief morphed into a Navy SEAL, bashing in doors, killing without question and urging his companions to please not spend another 20 minutes talking to the ghost in the basement.

Having got him into this mess, his mission became mine: Not to defeat the wizard and rescue Priscilla, but to just get through the game, go home, and maybe salvage what was left of our working relationship.

But since it’s heresy for a Dungeon Master to simply tell players what to do, I could only send psychic messages:

Oliver: “Walk up the stairs and kick in the door.”

In the end, the adventurers destroyed the wizard before he could transfer the ghost of his dead lover into the body of Pricilla Wester, although that was three hours in and I’m not sure Oliver was lucid enough to appreciate the ovations of the townsfolk.

It’s alright. As foreign journalists, we had both been in that situation before: In some ceremony conducted in a language we don’t understand, with only a vague idea of what’s happening, trying our hardest to be interested, but really just wondering when everyone will break for lunch.

But at least at the game club there was whisky.

One of the golden rules of journalism is the right to reply. So when our intrepid reporter, Jared, wrote in these very pages that I was a “crotchety jerk” for being dismissive of yet another story proposal about Dungeons and Dragons, my immediate response was to write him an angry letter – but then I realised I could just have some words with him across the newsroom. 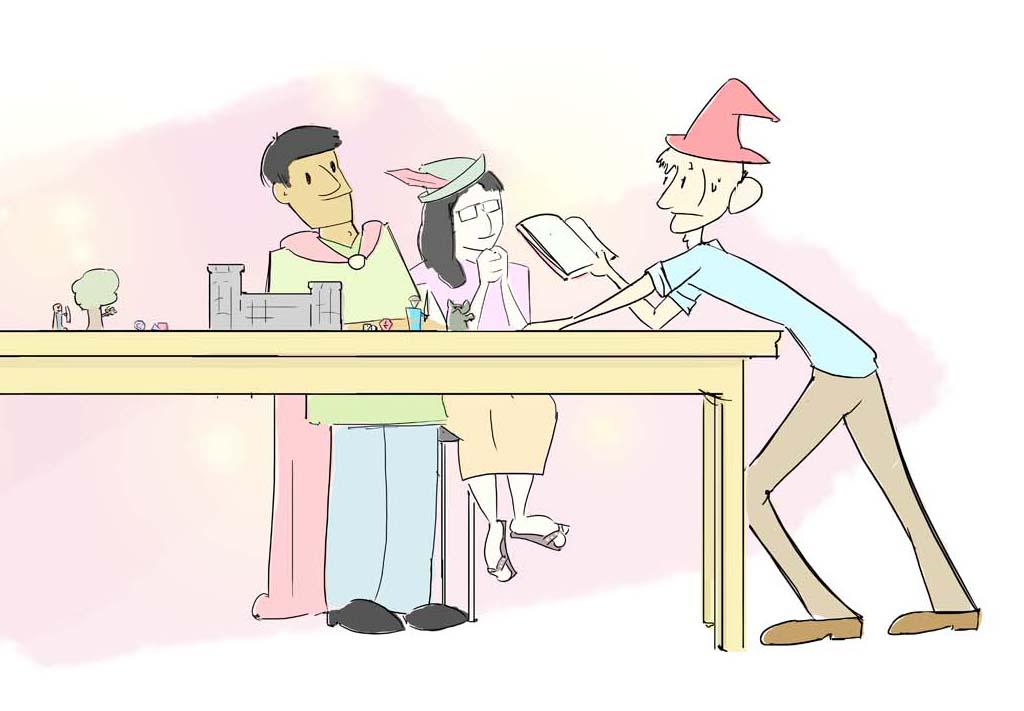 Apart from one lost summer of being obsessed with “GoldenEye 007” on a mate’s Nintendo 64, I’ve never been much of a gamer. So when Jared invited me to Yangon’s gaming club for a game of D&D, I audibly scoffed. But as may be evidenced by the fact this is at least the fifth story about the game published in this magazine, Jared is a persistent fellow, and a few weeks later I found myself travelling to the Dagon Dice club in Sanchaung.

I hold my hands up from the start: on this particular evening I wasn’t in the best of moods, and very nearly cancelled the appointment. But judging from the reams of paper he’d printed off at work, Jared had put in significant effort to organise the evening, and another friend, Alex, who is – technically speaking – a full-grown adult, also told me he “made an excellent wizard”, and I didn’t want to miss it.

Dagon Dice is a fairly impressive operation. Converted from an old bar, it is made up of about two dozen members. They’re a friendly bunch, and have an extensive collection of D&D-related memorabilia, including more toys than my two-year-old nephew.

Whiskies poured and pizzas ordered, we settled down to play. Jared passed me a card that told me I was a Drow Rogue 2. I was apparently good at sneak attacks and stealth; I spoke Elvish, was mischievous and dishonest – traits that my friends will tell me are less fantasy than I would like to admit.

Jared, it must be said, is a quite remarkable MC – or, as he corrected me at one point, Dungeon Master. His voice boomed, he switched accents on cue, and guided this lost newcomer diligently through the early exchanges.

We started in a tavern, where an old man was being beaten up. For the heck of it, I joined in. A surly look from one of my fellow players told me that was probably the wrong move, and within seconds I was outside the tavern, fighting the very same thugs I had joined moments before.

We won that battle and moved on to a haunted mansion. I had no idea what was going on, so I sipped my whisky and continued to make terrible decisions. Someone yelled what I can only assume was a battle cry, another got hit by a fireball, and I was bitten by a luminous green spider.

It was all rather confusing, but also enjoyable – to a point.

By hour three, my enthusiasm for the game had worn off, a fact that was pretty obvious to my fellow players. But we carried on nonetheless. We beat up zombies, killed ghosts, and by hour five had captured a young lady from her creepy ex-lover. We won, and were marched into the town square.

Being entirely honest, it probably wasn’t for me. But I can see why people enjoy it. There’s excitement (some of the time), a strong sense of camaraderie, and free-flow whisky. I’m just not sure I’ll go back.

Then again, I’m not sure if I’ll be invited…