The government is moving to regulate private security firms amid calls for the corporate sector to adopt a new mindset towards risk management.

A BOMBING in downtown Lashio in February that claimed the lives of two bank employees has focused attention on corporate security awareness and risk management, as well as the role of private security firms.

The powerful explosion late on the afternoon of February 21 shattered a branch of Yoma Bank, killing two women and injuring another 19 employees. It badly damaged a nearby AYA Bank branch, where one person was hurt. A passer-by was also injured by the blast, which was detonated a short walk from a police station.

Among the first on the scene was U Htun Myint, 55. A member of a community youth group in Lashio, he spent four hours helping the search and rescue effort at the Yoma Bank branch, where the force of the blast collapsed the upper floor.

Htun Myint had a lucky escape from a fatal bombing at sports ground in Lashio when he was seven and the memory of it unsettled him after he returned home on February 21.

“What I was thinking was, ‘Yes, it was right to help but what if there had been another bomb?’ All of us could have been hit,” he said. 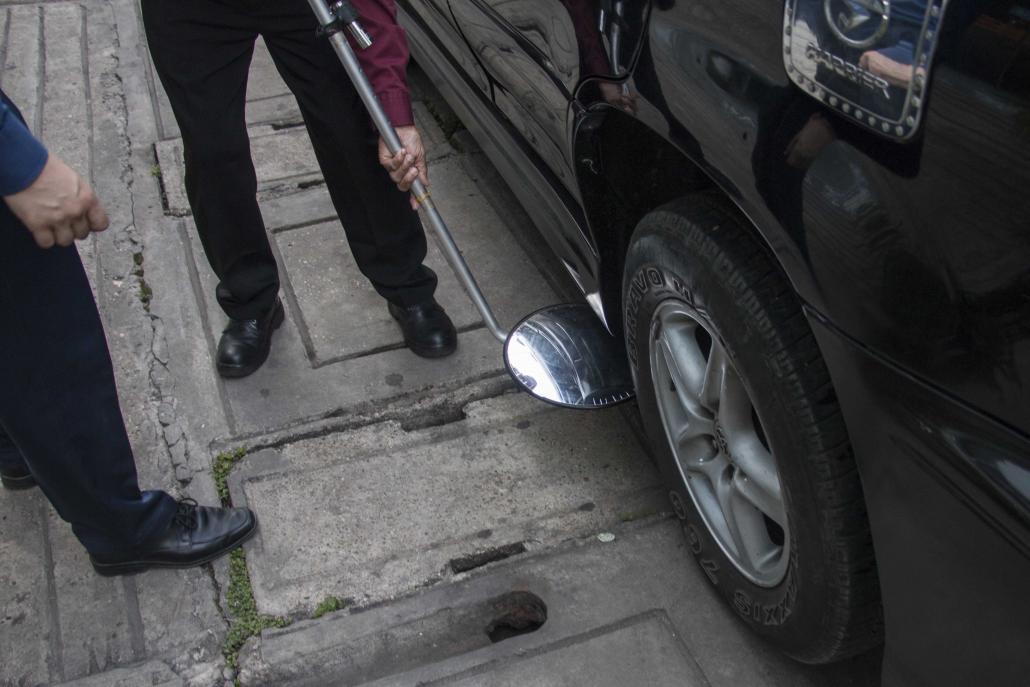 A security guard is trained by Exera to search for explosive devices under a car. (Nyein Su Wai Kyaw Soe | Frontier)

There has so far been little clarity on who was behind the Lashio attack, what the motivation was and what could have been done to prevent it.

But security analysts said it has highlighted the importance of improving security awareness in the banking sector. Banks make lucrative targets in Myanmar’s mostly cash-based economy, and Yoma is far from the first institution to be targeted.

Police are still hunting for four men armed with guns and knives who robbed a KBZ Bank branch in the Kachin State capital, Myitkyina, of K92 million on January 23. Before fleeing the bank, they destroyed its CCTV system, including the cameras.

Police said CCTV recordings recovered from the rubble after the Lashio incident were of little use because they were damaged by the blast.

Mr Geoffrey Hamilton, chief executive of Exera, a security consultancy established in Myanmar in 2012, told Frontier that cloud computing provided a more secure method of storing CCTV images than saving them on servers.

Hamilton shares the belief of other analysts that the target of the Lashio bombing was not Yoma or any other bank. 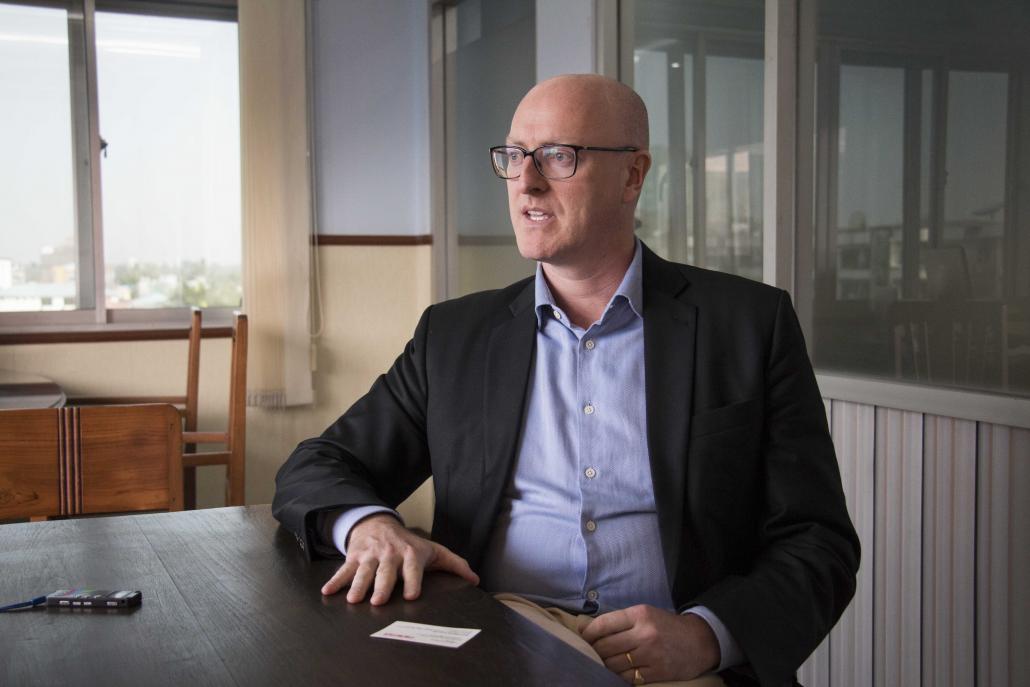 He said Exera had conducted an assessment after the bombing because it has clients in the area.

“As far as we can tell, the Yoma Bank was not being targeted, it just happened to be on the main street,” said Hamilton, who served in the Royal Canadian Navy for 20 years.

Although banks are paying more attention to security issues since the Lashio bombing, there seems to be a reluctance to hire private security firms.

Aspect Management Security (Myanmar) was established in 2009. Its website lists the United Nations Development Programme, United Nations Population Fund and the UN’s Office for the Coordination of Humanitarian Affairs as clients.

However, Aspect says that in the nine years since it launched operations it has never been contracted to provide security services for a bank.

“What the banks mainly want is for us to train their security staff and [to conduct] training classes [in security awareness],” said Aspect managing director U Myint Naing, who is also a director of its sister company in Singapore, Aspect Security Management. 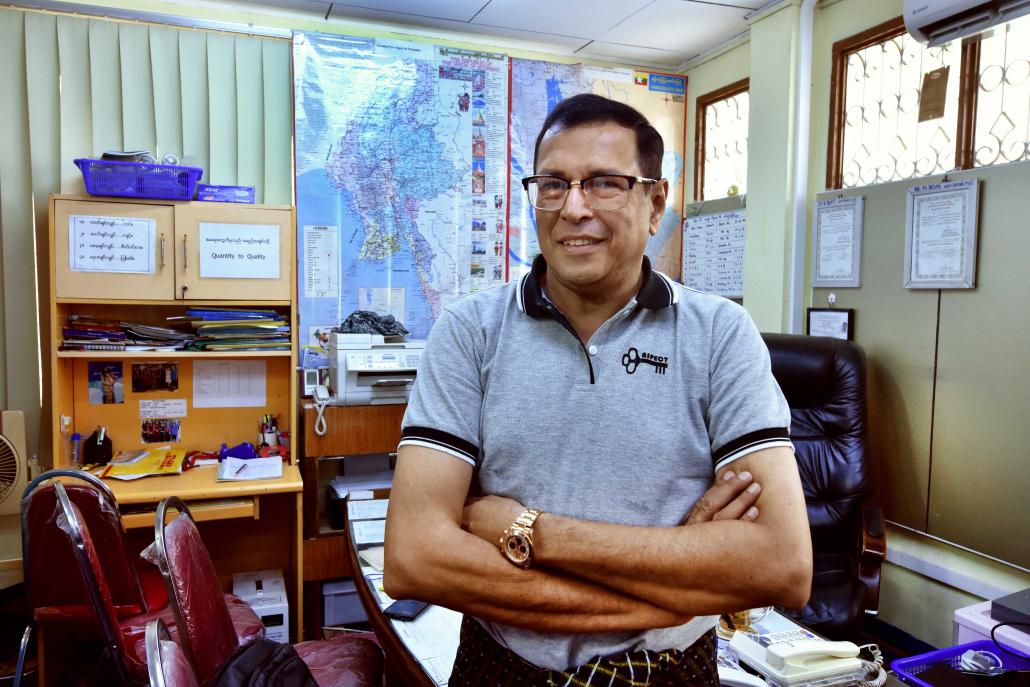 Myanmar Citizens Bank chief executive Dr Thaung Han said he had been disappointed by security companies in the past.

“In my previous companies, when security work was outsourced to security services companies they did not meet expectations; some guards were too old or too young, and some had no discipline,” he told Frontier. “These could be the reasons why banks avoid outsourcing security services.”

Despite growth in the private security services sector in recent years, the industry does have an image problem.

Hamilton agreed that a lack of confidence in security firms was the most likely reason why they were spurned by banks and other businesses.

“You can see security guards sleeping in plastic chairs, and I think that’s their experience of what a security company has to offer in Myanmar,” he said.

Yoma Bank said it was preparing to outsource the night shift security at all branches, under a decision made before the Lashio bombing.

Ma May Oo, the bank’s communications officer, said negotiations with security firms had started before the bombing, but added that security would be further boosted because of the incident.

Meanwhile, security firms have been affected by the sensational arrest last October of U Phyo Ko Ko Tint San, 41, son of former sports minister U Tint San and chairman of the ACE Group of Companies. He was arrested with two associates at Nay Pyi Taw airport after two handguns and illicit drugs were allegedly found in his carry-on luggage. Subsequent searches of family properties resulted in charges for the unauthorised use of the National Security Council logo on vehicles and uniforms.

The arrests and the seizures of weapons and uniforms with the NSC logo prompted a re-evaluation of security arrangements by officials in Nay Pyi Taw.

The government had also begun preparations to draft a law governing the activities of security firms, in which the Ministry of Home Affairs would play a key role, he said.

In a related development, a Ministry of Home Affairs announcement on January 17 reminded security firms to ensure that uniforms worn by their guards were not similar to those warn by the Tatmadaw and the Myanmar Police Force.

Hamilton said many companies had an outdated approach to security risk and urged them to start taking the issue seriously. A first step would be to establish risk management strategies, he added.

“We’re seeing bank robberies, ATM frauds, invoice scams – all activities that we didn’t see five years ago are starting to emerge, and I think local companies are not aware of those developments,” he said.

“None of these [security risks] are going to go away overnight, especially in terms of armed robberies and petty crimes; that’s only going to increase.”

TOP PHOTO: Residents stand near a Yoma Bank branch in Lashio that was damaged by a bomb on February 21, killing two staff. (AFP)

The military regime is set to drop meaningful structural reforms from an economic recovery plan initiated by the former National League for Democracy government, and is instead promising to slash red tape in a bid to shore up collapsing business confidence.
BY Frontier