The passing of a new financial institutions law in January has raised hopes of a brighter future for the nation’s banks but there are challenging times ahead.

The people of Myanmar have always had a wary relationship with banks. The slightest rumour of trouble in the banking industry can trigger a run. The big run in 2003 shocked many depositors and left many people with no trust of banks.

The wariness about banks is one reason why the financial sector in Myanmar is the least developed in Southeast Asia. Only 16 percent of adults have a bank account, according to a report last year by New Crossroads Asia, a research firm, and the World Bank says less than 20 percent of the population has access to formal financial services. New Crossroads Asia said its survey found that 37 percent of the people who visited banks did not have an account and were only using them to collect remittance transfers. The country’s largest bank, state-owned Myanma Economic Bank (MEB), has 307 branches throughout the country, far fewer than a bank of comparable size in neighbouring Thailand.

The Financial Institutions of Myanmar Law, that was approved on January 28 and requires banks to renew their licences within six months, replaced a law enacted in 1990 by the State Law and Order Restoration Council. U San Thein, a financial specialist, said the new law is in line with Basel Committee’s requirements for banks introduced after the 2008 financial crisis. World Bank experts helped to draft the new law, he said. Industry sources are hopeful that the new law will contribute to a stronger banking sector but acknowledge there are challenges ahead.

Most people cannot borrow from banks because they have no security, such as land, houses or cars. New Crossroads Asia said data from the 2013-14 fiscal year showed that only 1,320 people for every million adults were able to borrow from banks. 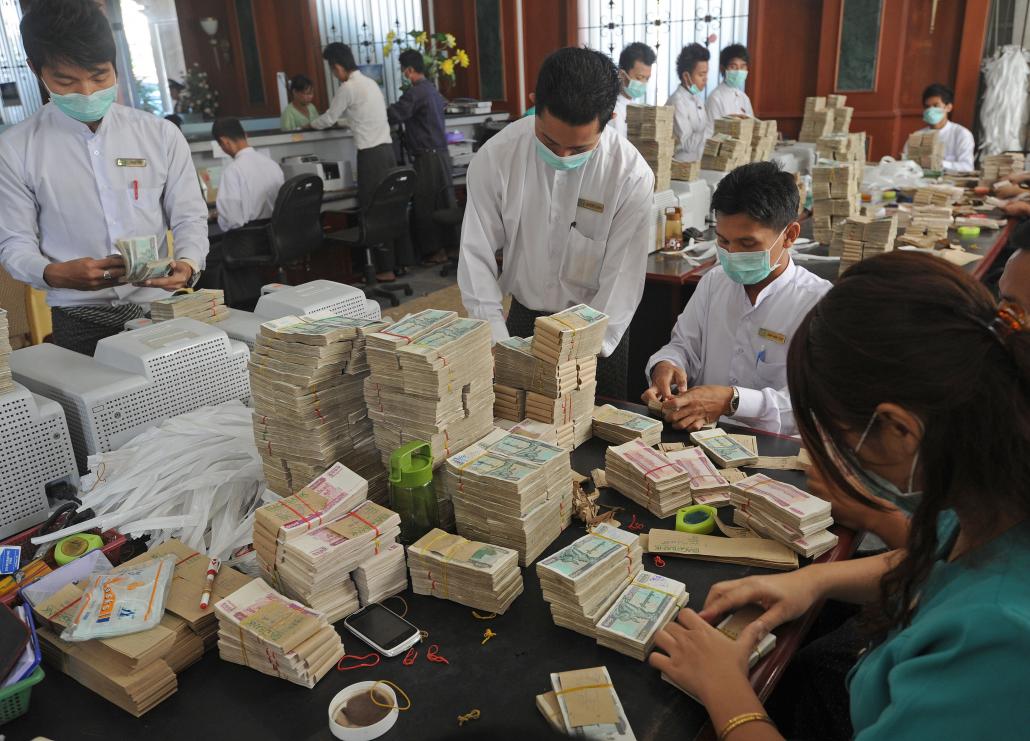 However, U Sein Maung, the chairman of First Private Bank, said it was prepared to lend money to anyone as long as it was certain they could meet repayment commitments.

Using property as security for a loan was no guarantee against defaults. “For example, now I have a factory as mortgaged property from a man who is unable to meet his repayments but cannot sell out and the bank is likely to lose its money,” U Sein Maung said.

“If there’s a crisis in the real estate sector, the banking sector will collapse,” U Sein Maung told Frontier in reply to a question at a panel discussion about the financial sector at the Myanmar Banks Association on February 25.

There’s also concern among some financial experts about the possibility of the country’s specialised banks creating problems for the financial sector. The specialised banks focus on individual sectors of the economy and include the Construction and Housing Development Bank, the Small & Medium Industrial Development Bank, Myanmar Microfinance Bank and Myanma Agriculture and Development Bank. The experts warn that a collapse or bubble in any of the sectors could precipitate the collapse of the relevant bank. The domino effect could mean that such a scenario would also affect other banks.

“The specialised banks are likely to collapse because they are vulnerable,” said U Mya Than, the chairman of Myanmar Oriental Bank. “I usually advise the national level authorities that the specialised bank business is very risky and shouldn’t be allowed but they are willing to establish more and more of these banks. Perhaps the government people have more financial knowledge than the bankers,” said U Mya Than, who also chairs the Myanmar Payment Union and the Yangon Interbank Exchange Market Committee.

The Central Bank of Myanmar says five of the 24 private sector banks are specialised, as are two of the four state-owned banks.

Another big issue confronting the financial sector is a reliance on cash. At any bank, staff and customers can be seen lugging big bags of cash. It shows that Myanmar remains a cash-based economy, rather than relying heavily on cards or electronic payment systems. There are 1,600 ATMs and 1.2 million Myanmar Payment Union debit card users throughout the country. Based on this data, there are 34,000 people for every ATM and about two percent of the population are using MPU debit cards. The only bank to issue credit cards is Ayeyarwady Bank. The number of users is small and the card’s use is very limited.

“Even our neighbouring country Thailand started the card-based system 25 years ago, so the situation in Myanmar can’t be compared to other countries,” said U Zaw Lin Htut, the chief executive officer at MPU. “I can accurately predict that our country’s electronic-based payment will grow faster than other countries,” he said. 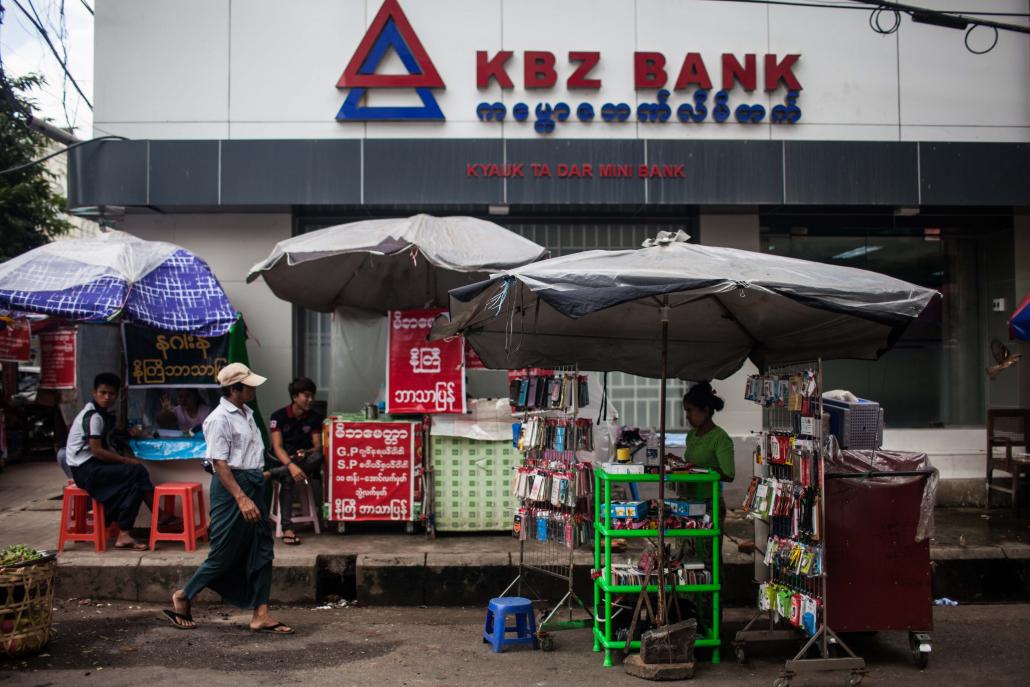 A looming challenge for the financial system is a likely huge surge in foreign investment after a National League for Democracy government takes office on April 1. The investment will bring benefits for many but for bankers it is likely to be a nightmare.

And there’s also the issue over the government’s decision to allow foreign banks to return to the market last year for the first time in more than 50 years and provide limited services, a move strongly resisted by the domestic banks. The first of the nine foreign banks opened branches last April. They are limited to one branch, barred from retail operations and permitted to lend only to foreign companies in foreign currency or to provide kyat loans to Myanmar companies through domestic banks. Restrictions also prevent foreign banks from handling money transfers.

The Central Bank said in February that a second round of foreign bank licences had attracted expressions of interest from 13 institutions, of which eight are in Taiwan and the rest from Vietnam, South Korea, India and Mauritius.

“If the foreign banks were allowed to offer a full range of services it would be good for the people but a disadvantage for local banks,” said U Sein Maung. Local banks cannot compete with foreign banks, said the First Private Bank chairman.

Meanwhile, the looming opening of the Yangon Stock Exchange may make it more difficult for domestic banks to attract depositors. Banks are paying interest on savings of 0.8 percent and some financial market analysts predict that people will invest in the YSX in the expectation of higher returns.

One of the nation’s most prominent bankers, Serge Pun, called for “totally different architecture” for the financial sector in a speech at an event at Yangon Economic University on February 26.

Addressing hundreds of MBA students, as well as academics and others, Mr Pun, the chairman of Yoma Bank and First Myanmar Investment, said Myanmar in 2016 would undergo a bigger transformation than in recent years.

“The system that we have experienced in the past five years and that we will see in the next five years requires totally different architecture in terms of financial services,” Mr Pun said.

“What we’ve had in past years will simply not work today,” he added. 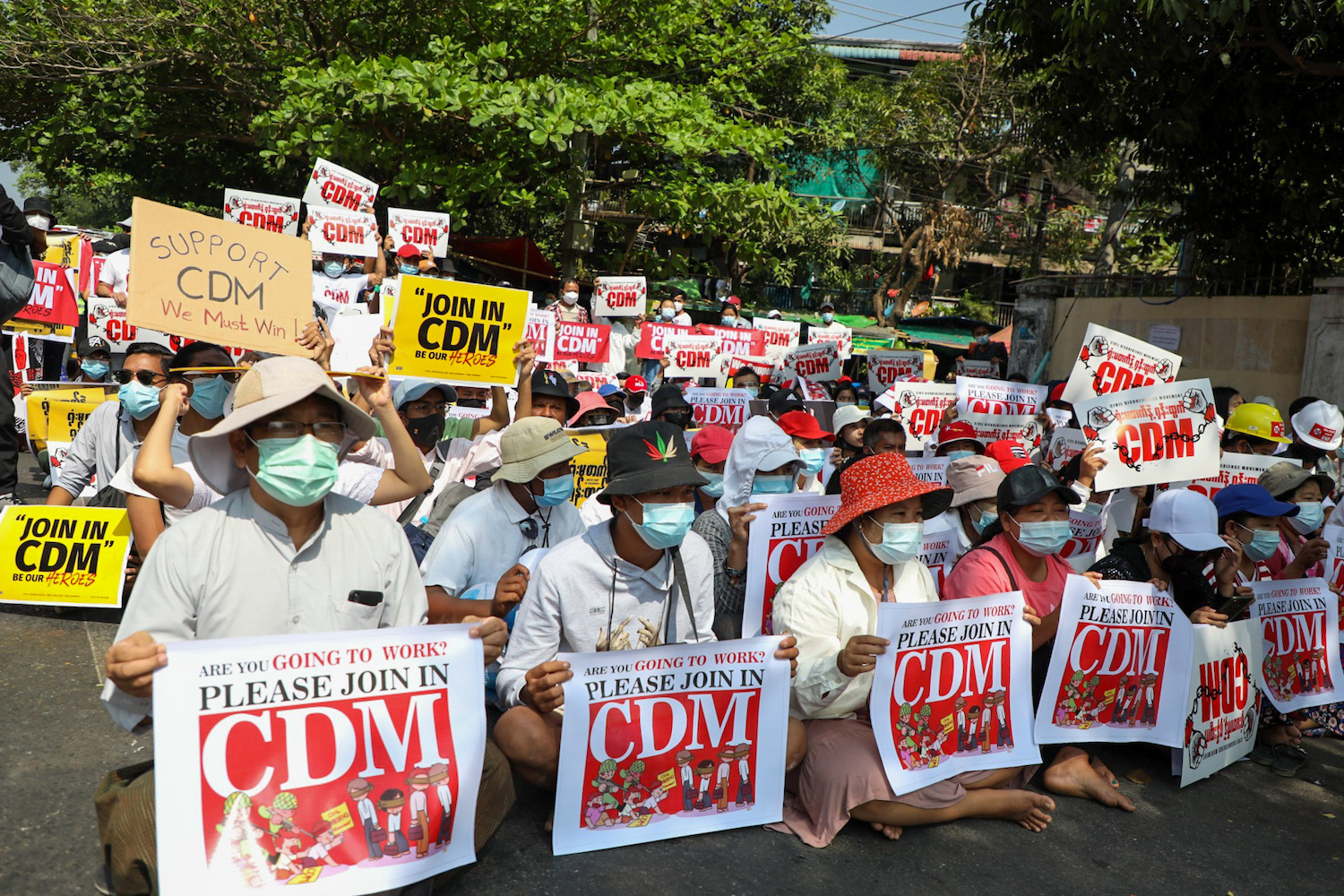