Another betel warning, but is anyone listening?

The latest campaign against chewing betel follows indications that the deeply-ingrained national habit is becoming more popular, including among women.

CHEWING BETEL is proving a hard habit to kick in Myanmar, despite being linked to cancer of the mouth, with the latest campaign to call for abstinence promoting its message on Facebook with the slogan, #StopBetelMyanmar.

The six-week campaign was launched by the Ministry of Health and Sports and a non-profit group, the People’s Health Foundation, in Yangon on October 8.

It’s the latest in a series of campaigns aimed at highlighting the dire health consequences of chewing betel, but there are indications that the warnings are having little impact.

Betel chewing and spitting is ubiquitous in Myanmar, and the ceremonial offering of betel quids to household guests is a deeply-rooted tradition of the country.

Figures for Myanmar from the Delhi-based Southeast Asia regional office of the World Health Organization show that the number of betel users increased among men and women in the five years to 2014. Betel was used by 62.2 percent of men and 24.2 percent of women in 2014, up from 51.4 percent and 16.1 percent, respectively, in 2009.

Ministry of Health and Sports figures show that more than 7.2 million adults and 152,000 children aged 13 to 15 consume tobacco or tobacco products each day.

There’s limited data on the link between betel chewing and cancer, but one survey of 67 patients with head or neck cancer at Taungoo General Hospital in 2016 found that all were betel chewers, while many also smoked tobacco and drank alcohol. Cancer of the oral cavity was the most common type (34.3 percent) followed by larynx (25.4 percent), according to the study, which was presented at the ESMO Asia 2017 Congress.

Dr Thein Swe, vice president of the People’s Health Foundation, said that there was no national data for what proportion of oral cancer patients are regular betel users, and the foundation is currently undertaking such research.

But he said that it was clear that betel chewing remained a major health issue.

“Despite the campaigns, there is a long way to go and more needs to be done including a multi-sectoral approach to end betel quid chewing,” Thein Swe said at the October 8 launch. 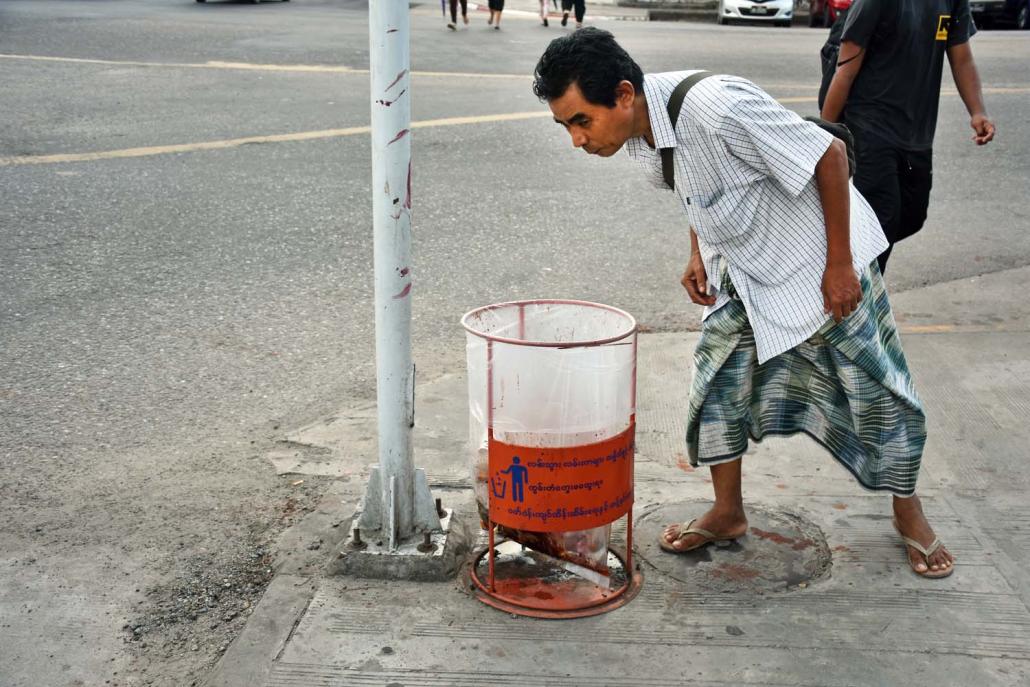 Dr Kyaw Kan Kaung, director of the ministry’s department of public health for non-communicable diseases, told the event it was important to work together with other ministries to help reduce the consumption of betel and smokeless tobacco.

“We have asked the concerned department of the government to reform the central tobacco committee to be in line with the current age,” Kyaw Kan Kaung said.

He also said the issue needs to be raised in the Union Hluttaw, which should consider measures aimed at reducing consumption such as higher taxes on betel sales, as well as on smokeless tobacco, which is imported for making betel quids.

However, any move to target sellers would affect thousands of small stall-holders throughout the country and the farmers and others who supply their raw materials.

Among them are Daw Moe Thu Zar, 42, and her younger sister, Ma Phyu Phyu Thin, 29, who began selling betel near Aung San Stadium nine months ago after encountering difficulties making a living as seamstresses.

“Selling betel is an easier way to make some money than being a seamstress,” Moe Thu Zar told Frontier.

The sisters travel from nearby Pazundaung Township and operate their stall from 6am to 7pm.

They usually buy their betel leaf from Pazundaung market, though they sometimes buy it from Thirimingalar wholesale market because it is cheaper, and source their areca nut from Yankin market.

The most popular areca nut is produced at Taungoo in Bago Region, but most of the nut on the market is from Ye in Mon State and Dawei in Tanintharyi Region.

Another key ingredient is the betel leaf used to wrap the quid. Moe Thu Zar said the most preferred leaf in Myanmar is produced at Pantanaw Township in Ayeyarwady Region, because it is soft.

The addition of tobacco makes a quid complete and the most popular brands on the market are “92” and “Queen”, while locally grown varieties known as “yellow” and “black” based on their appearance are also commonly chewed. 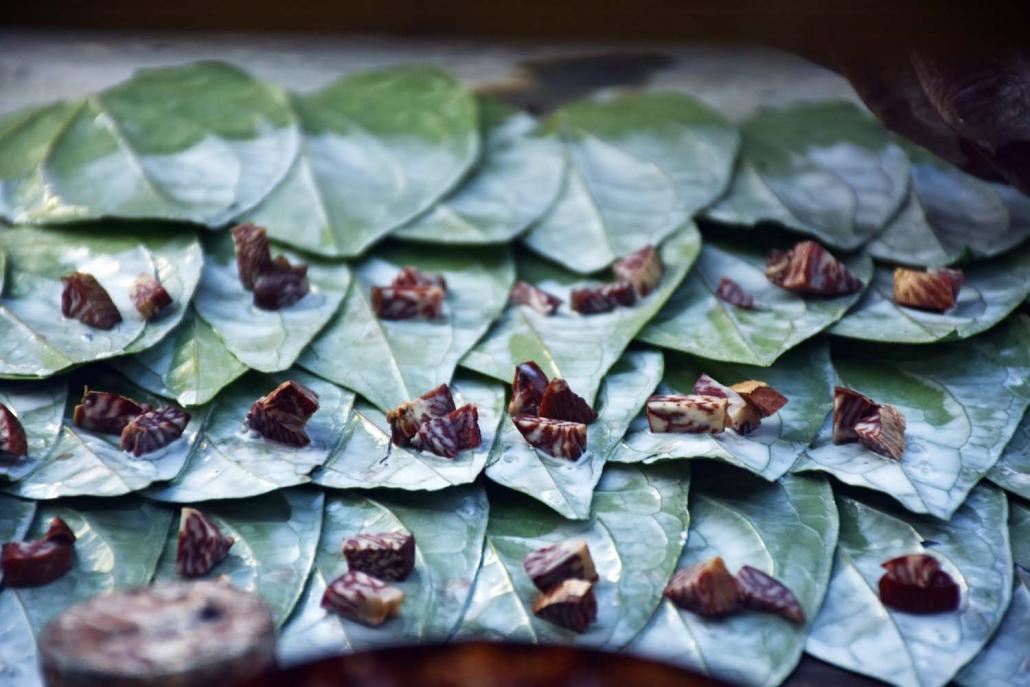 Quids of betel nut are lined up for sale in Yangon. Although a pack of five sells for just K200, vendors can make K50,000 or more a day. (Steve Tickner | Frontier)

Phyu Phyu Thin said there were strong regional and ethnic preferences for the tobacco added to quids.

People from the middle part of the country prefer yellow tobacco, those around the Mon State capital Mawlamyine like black tobacco, the favourites of Yangon residents are 92 and Queen and people of South Asian descent use a red tobacco imported from India, she said. Most women and girls in Yangon prefer tobacco-free quids.

Customers pay K200 for a pack of five quids made with 92 and Queen tobacco or for six tobacco-free quids.

She said that Yangon City Development Committee workers sometimes check on betel stalls, but the sisters usually receive a tip-off in advance and close their business for a day.

Both sisters said they were aware of government campaigns against chewing betel, but working from morning to night meant they had little time to watch TV or read newspapers.

“We do not know in detail about the campaigns, but I heard that in Mandalay people are not supposed to spit on the road,” Phyu Phyu Thin said.

“If we are forced to stop selling betel nut for health reasons then we’ll comply … and return to our previous work,” said Phyu Phyu Thin.

U Tin Nyein, 55, from Yangon’s outer North Okkalapa Township has been selling betel near a cinema on Bogyoke Aung San Road in the downtown area for more than 30 years.

He says his earnings range between K30,000 and K60,000 a day and most of his customers are taxi drivers and manual workers.

“It’s a easy way to make cash in hand,” Tin Nyein said, echoing Moe Thu Zar, though he admitted that sales were not as buoyant as during the 1990s and the cinema was quieter during weekdays than in the past.

“I have to do a lot of sitting since I am relying on the cinema,” he said, adding that takings were a little better on weekends when movie audiences are bigger.

Tin Nyein said he became aware of a government campaign to reduce chewing betel a year ago but was sceptical about warnings linking the habit to an increased risk of developing cancer of the month.

“I used to chew betel but nothing has happened to me until now,” he said, adding that the habit only caused cancer in unlucky people.

Tin Nyein said that banning betel sales would create difficulties for his family and he would have to find a new way to make a living.

He had chewed betel until two years ago but stopped after developing pain in his gums because he had to struggle to grind and chew the areca nut, a problem he attributed to growing old.

As part of its effort to deter betel chewing and unsightly red stains, which are especially noticeable in stairwells, the YCDC approved a by-law in June that levies a fine of between K30,000 and K50,000 on spitting betel juice in public places.