Andy Hall: ‘They would be happy if I would flee’

British labour rights activist Andy Hall, who has spent much of his life advocating on behalf of migrant workers in Thailand, has been visiting Myanmar to discuss migration policy with the incoming National League for Democracy government.

An advisor to the Thai-based Migrant Worker Rights Network, Mr. Hall is on trial in Thailand for allegedly defaming a fruit processing company accused of labour rights abuses.

Mr Hall, a lawyer, also played a role in supporting the legal team that defended Ko Wai Phyo and Ko Zaw Lin, the migrant workers sentenced to death by a Thai court on December 24 for the murder of two British backpackers on Koh Tao in 2014. The convictions of the two Rakhine men followed a police investigation widely derided as flawed.

Frontier’s Joshua Carroll spoke to Mr Hall about the Koh Tao case and why he thinks the change of government will not result in an en masse return of Myanmar migrant workers from Thailand.

You’ve been working on migrant rights in Thailand for 11 years. How have things changed in that time?

I think things have improved a little bit. But the policy is systematically flawed. Whether that be the policy of the Thai government or the policy of the Myanmar government, I mean it’s terrible. There’s no long-term migration policy that takes into account national, human and economic security. When you’re relying on so many millions of people from overseas and you don’t have a proper policy in place it’s just chaotic.

Do you think the NLD’s election victory will make a difference to migrant workers in Thailand?

In 2014/15 the MWRN office here [in Myanmar] was very low profile, just doing some training and doing a little bit of advocacy with the government … and it didn’t really go anywhere to be honest, it was just very small and the funding got cut every year. It’s only now that U Sein Htay, the [MWRN] president, keeps saying to me, ‘Come on Andy, you need to come back to Myanmar and meet people, now is the time of transition’.

Are you expecting many migrant workers to return to Myanmar under an NLD government?

The difference in wages between the two countries is so extreme. In Thailand, if they’re treated well, they’re getting US$10 a day; they can even get up to $20 a day. So if you compare that to what people get in Myanmar it’s such a big difference that they can’t economically return. Certainly 99.9 percent of workers in Thailand want to return but in Thailand they get free healthcare, even though it’s not always good, and they can earn a lot of money to support their families, while in Myanmar the economy’s not ready to absorb that many people.

But certainly the issue we were discussing with Dr Tin Myo Win [Daw Aung San Suu Kyi’s doctor, who has been tipped for the presidency] and with the NLD is the means by which Myanmar can get those workers back to develop the economic and social fabric of Myanmar society.

You are being sued by the Natural Fruit Company Ltd in Thailand for interviewing its workers about alleged labour abuses. If convicted you face the possibility of a long prison sentence. Are you tempted to flee Thailand?

No, no, no, no, no. They would be happy if I would flee, you know. They would be very happy. No, I have to prove a point, that these laws are ridiculous and that the way in which they’re using them against me is just judicial harassment. And we also have to stand up for the migrant rights issues. I can’t run away. I never thought once about it, in fact other people around me, my friends and my colleagues, they think about it more than I do. But I have to fight. It’s a good way to raise attention also. 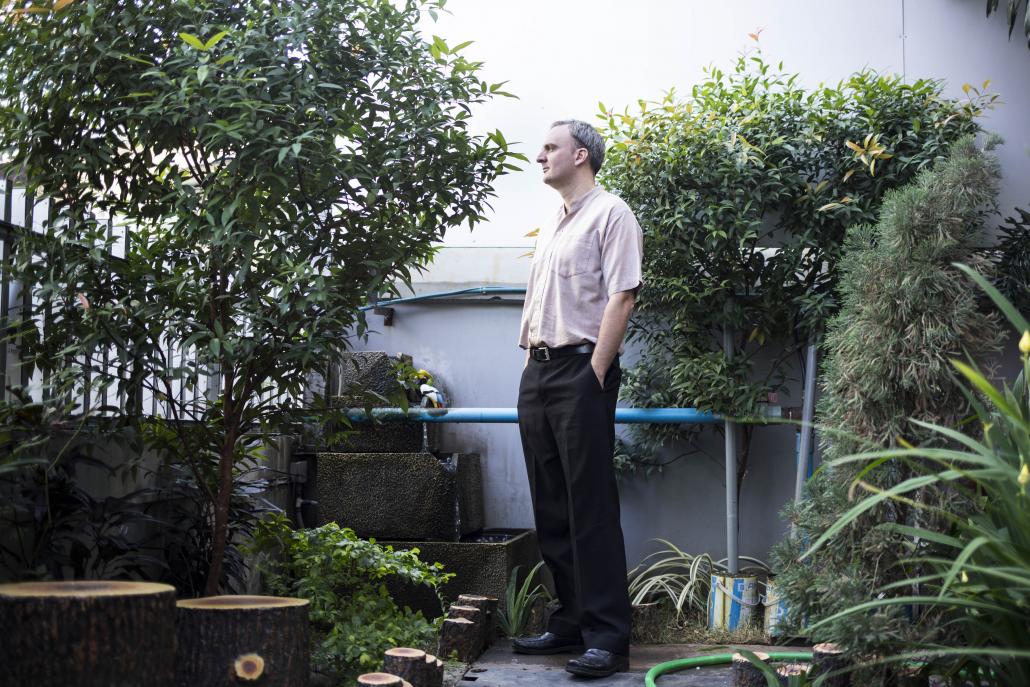 You have said you are confident of being acquitted. How can you have so much faith in the Thai justice system when it seems to have failed the suspects in the Koh Tao case?

It didn’t fail them because we’re going to win on appeal. There’s no way that Zaw Lin and Wai Phyo can be convicted because the evidence against them is not strong. The investigation was a shambles and it didn’t comply with international standards. And the way in which the DNA analysis and the forensics analysis was collected and analysed and reported doesn’t comply with international forensic standards.

The case file is this big and I read everything, more than anybody. The evidence is unreliable … so what I’m saying is that I believe that on appeal we’ll win. And so in my case I believe the same. Maybe the court in the first instance will find me guilty but I know that at the end of the day I didn’t put these things on the website [of Finnwatch, the NGO that published the allegations against Natural Fruit]. I didn’t write the report, and so I’ll be cleared.

If Ko Zaw Lin and Ko Wai Phyo do not win their appeal is the death sentence likely to be carried out?

This appeal, I think, will be submitted in March or April so it’s going to take a while because it’s a lot of stuff to get through, and then the appeal process will take up to a year or even more. And then once the appeals court makes its ruling it will agree with the lower court or it will disagree. If it disagrees then the prosecution will appeal, and so it will go on for maybe four or five years.

If the appeals court acquits Zaw Lin and Wai Phyo they should be ordered to be released immediately but in Thailand often, particularly with migrant workers who don’t have any immigration status, they would maybe refuse the bail on the grounds that they might flee the country and go back to Myanmar or whatever, so it’s not clear even on appeal, if they won, whether they would be freed or not. It may be that they’re going to be in prison for many years.

No, they’ve never been serious about this and they’ve been more of a disruption than anything else to be honest. We agree strongly with Aung San Suu Kyi’s position – and we’ve advised her on this anyway – that this is an issue the Thai justice system has to deal with. It has to be dealt with on appeal and it should be a decision that’s made independent of public pressure and independent of any country whether that be Thailand, Myanmar or England.

If they [the Myanmar investigation team] have evidence that they are innocent then they should bring it to the defence team. On the basis of that case file it’s very clear it’s a failed investigation so you can’t conclude that they are innocent or guilty. But what you can conclude is they shouldn’t be convicted because the evidence is unreliable. They [the Myanmar government] don’t seem to be very much up to speed and it’s clearly a populist response.

Are you concerned by the anti-Thai sentiment that emerged in response to the death sentence?

We respect the freedom of expression of anybody to make their thoughts or their feelings made. It’s a very emotive case, it always has been. Whether it be for the victims or the defendants, you have two very small Myanmar migrants who are in a society which systematically exploits Myanmar migrants, you have two kind of very beautiful, handsome British people, and a beautiful beach and a paradise setting. It makes it an incredibly emotive case.

The second issue is that it’s clear that whether it be the government or certain elements of Myanmar society, people are using this case for their own personal benefit or for some populist means, so we strongly disagree with that and we disagree with anyone using this case as a means to incite racial hatred or xenophobia.