An outpost of Catholicism in Myanmar prepares for the Pope

KAWKAREIK, Kayin State — Father William’s 16-strong flock on Myanmar’s eastern border is one of the Catholic Church’s tiniest outposts, but next week they will join a tide of 200,000 faithful in Yangon for a historic mass led by Pope Francis.

The Pope, renowned for powerful entreaties for peace no matter how highly-charged the issue, arrives on Monday in a country on the defensive over its treatment of the Rohingya community.

Some 620,000 Rohingya have been driven from Rakhine State to Bangladesh since August, prompting allegations of ethnic cleansing of the stateless minority.

While Pope Francis’ visit is inevitably framed by the crisis, Father William Hla Myint Oo says it will not overshadow the momentous event.

The compact congregation of Kawkareik, just three families and several church volunteers, will join the priest for the eight-hour drive to Yangon.

“We’re very excited,” says the priest, who moved to the remote outpost in Kayin State just five months ago.

“(The Pope’s) visit to see us – a minority – gives us a real lift and strengthens our spirit.”.

It is the first ever papal visit to a Buddhist-majority nation, whose estimated 700,000 Catholics represent just over one percent of the population.

Kawkareik, a town in Kayin State of 40,000 people, sits in the foothills of mountains tracing the border with Thailand.

Kayin is famed for its tree-clad limestone hills topped by pagodas that attest to the dominance of Buddhism. 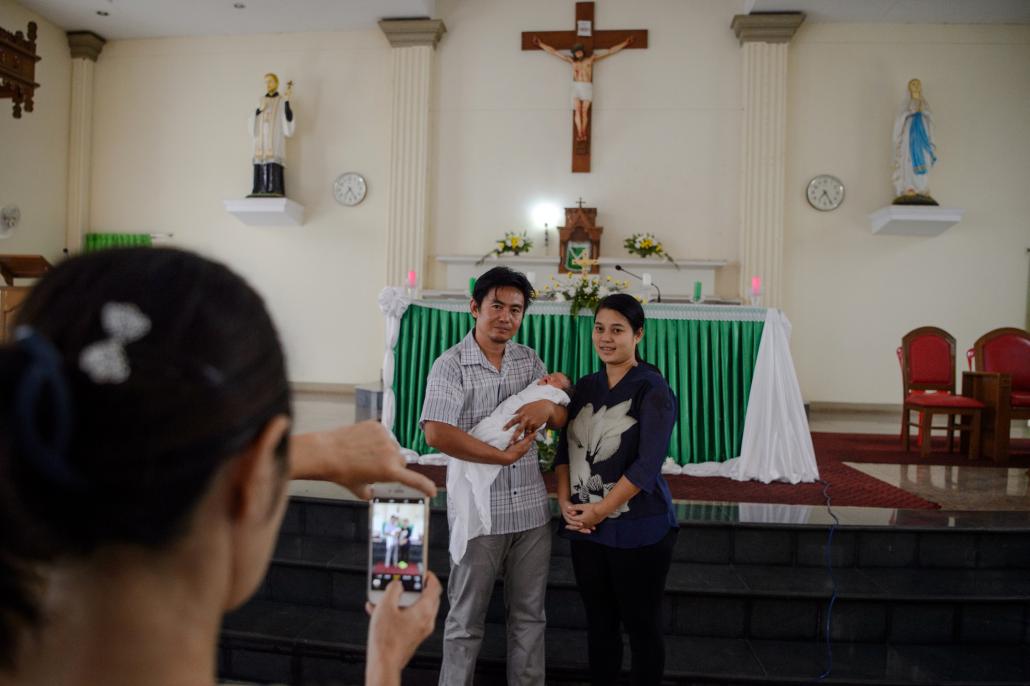 Gregory, 35, and his wife pose for a photo as he carries his newly-Christened one-week-old baby Elias at the St. Francis Roman Catholic Church in Hpa-an, Kayin State. (AFP)

The church, discreetly tucked behind high walls, has yet to host a wedding or a christening, giving its pastoral leader little work.

But the Yangon-born priest says the occasional flutters of boredom or loneliness have been dispelled by the Pope’s looming visit.

Maria Maung Lone, a spry 73-year-old worshipper, is equally delighted at the guest from the Vatican.

“None of my ancestors have ever done this,” he says with a wide smile. “We’re so lucky that we have this chance.”

There have been Catholics in Myanmar for over 500 years, the religion brought by Portuguese traders from their Indian settlement in Goa.

But it was not until the 18th century that the country became a mission territory, even if spreading the Catholic word was not always easy.

Myanmar’s ferocious heat and malarial jungles threw up a natural barrier to progress, while Buddhist locals harboured reservations about the new faith.

That changed, however, after the 1988 uprising against military rule when the junta pitched itself as the keeper of the Buddhist faith as a tactic to augment its legitimacy.

“Suddenly we were being discriminated against,” Father Soe Naing says.

“If you were a Christian working for the government, you wouldn’t be promoted and it was impossible to build new churches.” 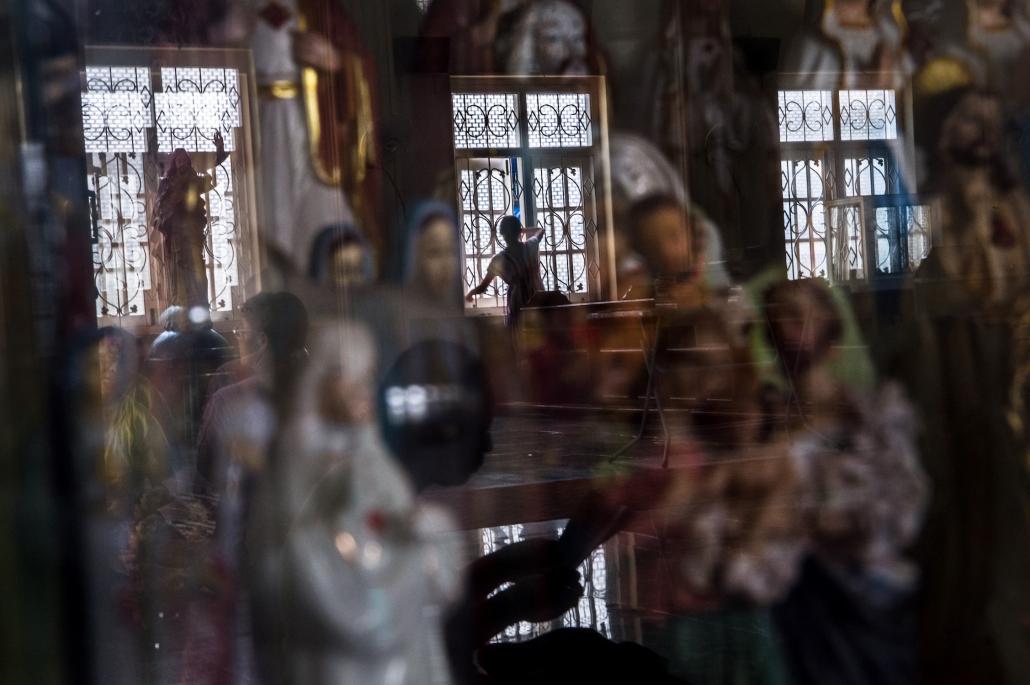 A Karen Catholic devotee closes a window after a Sunday service at the St. Francis Roman Catholic Church in Hpa-an. (AFP)

Today, however, he says relations with the Buddhist majority are back on track.

“We’ve grown up together, we mix with one another. We’re very good friends,” he says.

In 2014 the Vatican canonised Myanmar’s first saint, a religious teacher killed in 1950 while travelling in the eastern borderlands.

The country’s first cardinal was named in 2015.

Then the establishment of full diplomatic ties with the Vatican in May this year paved the way for the pontiff’s visit.

Catholics from across the country, including remote, mountainous areas of Chin and Kachin states, are expected to descend on Yangon for the Pope’s visit, which runs from November 27-30 and will include two landmark masses.

While Myanmar’s Catholics are delighted at the pontiff’s visit, the trip is also fraught with risk.

The country — and international community — is holding its breath to see if Pope Francis uses the word “Rohingya” on Myanmar soil when he addresses the Rakhine crisis.

The term is toxic in the country, where many follow the government line that the Rohingya are not an indigenous ethnic group but instead “Bengalis”, shorthand for illegal settlers from neighbouring Bangladesh.

“He will not be able to avoid speaking of the Rohingya crisis,” says Myanmar-based political analyst Richard Horsey.

“But he will also be aware that … the intervention of a Christian leader is more likely to inflame the situation than promote interfaith understanding.”

In recent months, the pope has repeatedly used the term “Rohingya”, calling for peace, interfaith acceptance and denouncing the plight of refugee children stuck in Bangladeshi camps.

His discourse has made Myanmar’s Catholic community nervous of a potential angry backlash from hardline Buddhist groups.

But briefings, including by Myanmar’s cardinal, about the sensitivities surrounding the crisis have gone some way to soothing the Catholic community.

“We can see the Holy Father is very well informed,” Father Soe Naing says. “I’m sure he understands the issues and so our fear is lessened.”

Back in his small parish, Father William is reluctant to be drawn on the politics of the papal visit.

“Human affairs are more important than politics and religion.”

TOP PHOTO: Catholic nuns reading prayer books during a jubilee celebration marking the anniversary of when they entered or professed vows in the religious community, at a church in Pathein on November 17. (AFP) 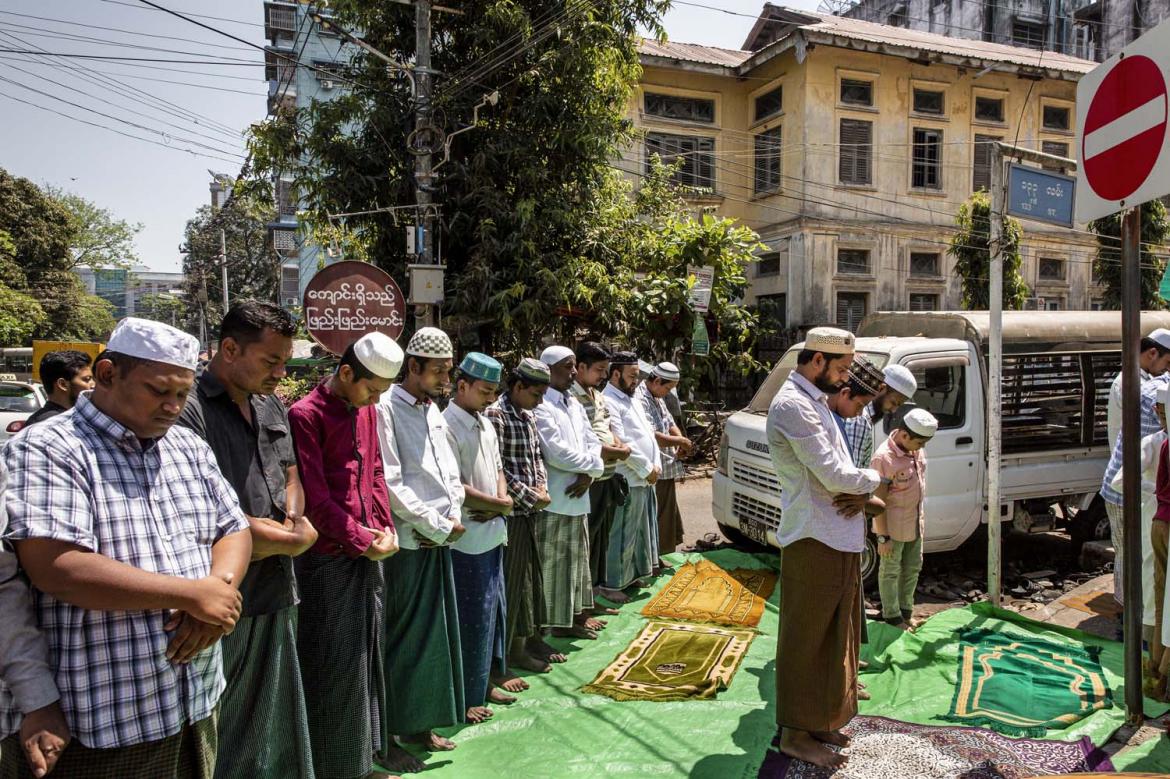