An army, a mountain and the Asian Development Bank

Villagers campaigning against quarrying operations on Mount Lun Nya in Kayin State have some powerful opponents and a recent attempt to inspect the site was cut short by gunfire.

WHEN A group of Kayin State villagers travelled to inspect a big quarrying operation on Mount Lun Nya earlier this month they soon realised their presence was not welcome.

Two shots were fired at the group, comprising 13 people in two cars, as it returned from inspecting quarries on the western side of the mountain.

The incident occurred about noon on November 15, Saw Hla Ngwe from Lun Nya Village told a news conference in Hpa-an in November 22. The day of the conference, residents sent a petition to Kayin State Chief Minister Nang Khin Htwe Myint urging her to order private companies to stop quarrying at the mountain.

About 900 people from villages around the mountain in Hpa-an Township – 24 kilometres (15 miles) southeast of the state capital Hpa-an – have signed the petition, which demands that the state government protect livelihoods and cultural heritage sites that villagers say are threatened by big quarries.

Hla Ngwe said the shots were fired minutes apart from a white sedan.

“Maybe they wanted to threaten us,” he told Frontier, adding that the incident had been reported to police.

Of the 23 quarries on the mountain, most are small operations on its eastern and western slopes operated by village groups for decades.

But in recent months a large quarry licensed to Chit Linn Myaing Toyota Co has begun operations. The company is owned by Colonel Saw Chit Thu, who leads the Border Guard Force in Kayin State that was created in 2009 from the Democratic Karen Buddhist Army. 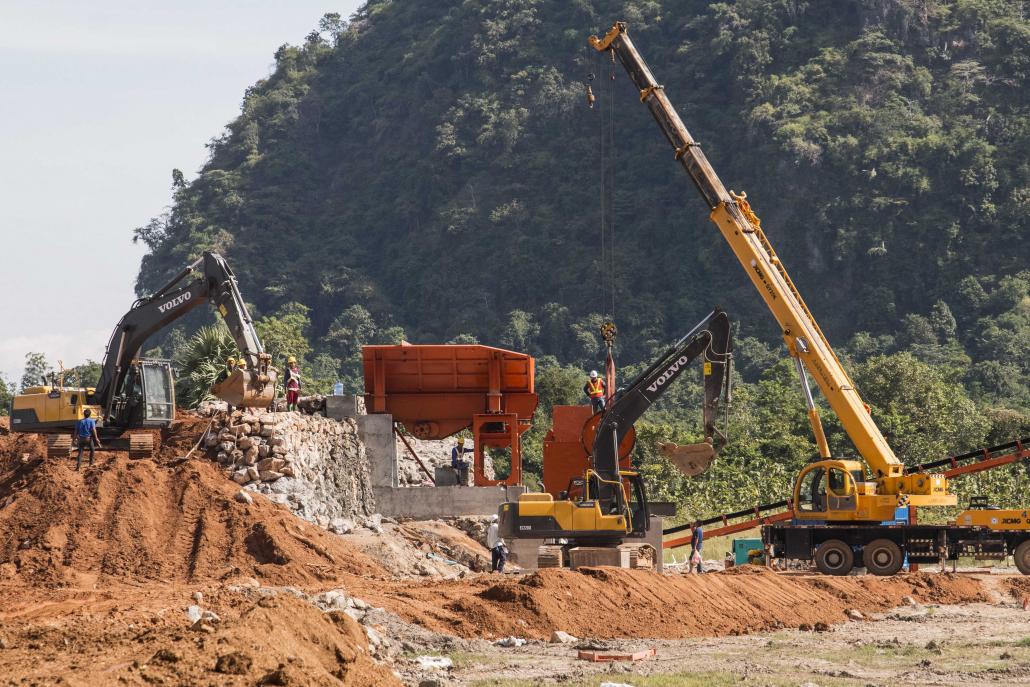 They refused to grant entry to the site and initially tried to stop journalists from continuing past the Chit Linn Myaing Toyota quarry to other areas of Lun Nya mountain.

The villagers say Chit Lin Myaing Toyota was licensed by the state-level General Administration Department in February 2017 to quarry rock at Lun Nya for three years.

Kayin State government officials refused to comment when contacted by Frontier, referring questions to the GAD. However, the head of the Hpa-an District GAD office, U San Maw, said because Chit Linn Myaing Toyota is related to the Border Guard Force questions should instead be directed to the military.

The GAD is under the Ministry of Home Affairs, which is headed by a serving military officer. Chit Linn Myaing Toyota also declined to comment when contacted by Frontier. 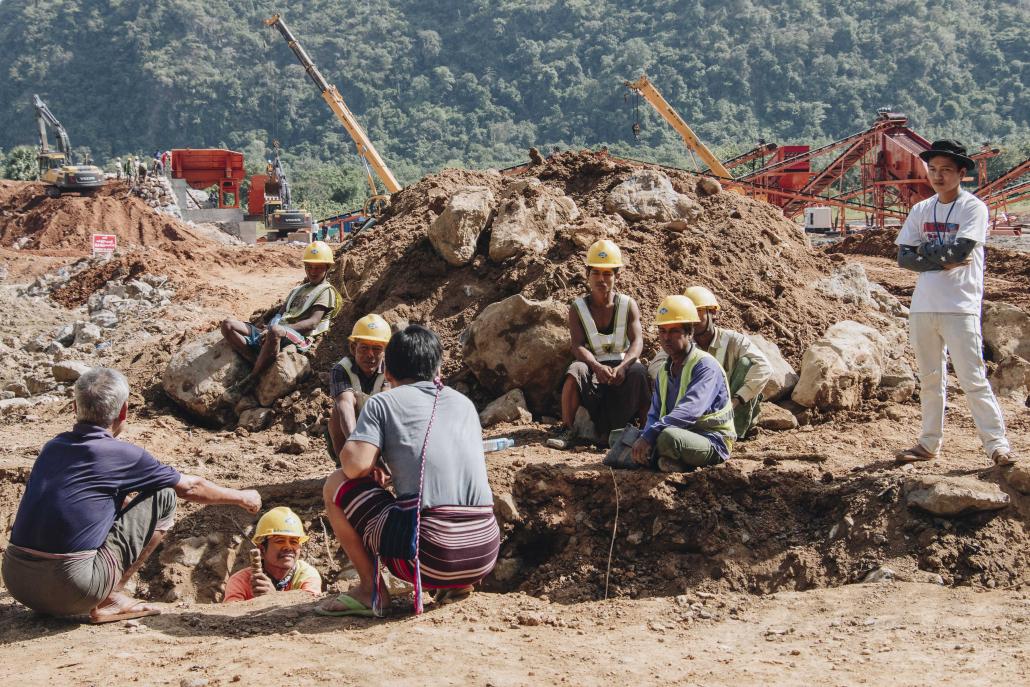 Under Myanmar’s mining law, quarries producing stone for road construction only require approval from the GAD.

However, U Thaw Tar Nyein, head of the Kayin State GAD, said the application was also discussed at a state-level cabinet meeting. Other departments are included as necessary; for example, if a quarry is situated beside a river or in a forest, the Ministry of Natural Resources and Environmental Conservation also examines the site. “If the ministry supports the project we can issue permission,” he said.

ADB reviewing use of quarry

The quarry has also caught the attention of the Asian Development Bank, as stone from the site is allegedly being used in a highway construction project that it is funding.

The villagers say Chit Linn Myaing Toyota has leased its quarry site to China’s state-run China Road and Bridge Corporation, which will use the crushed rock to upgrade the highway between Eindu and Kawkareik, on the main road link with Thailand and part of the Asian Highway network. 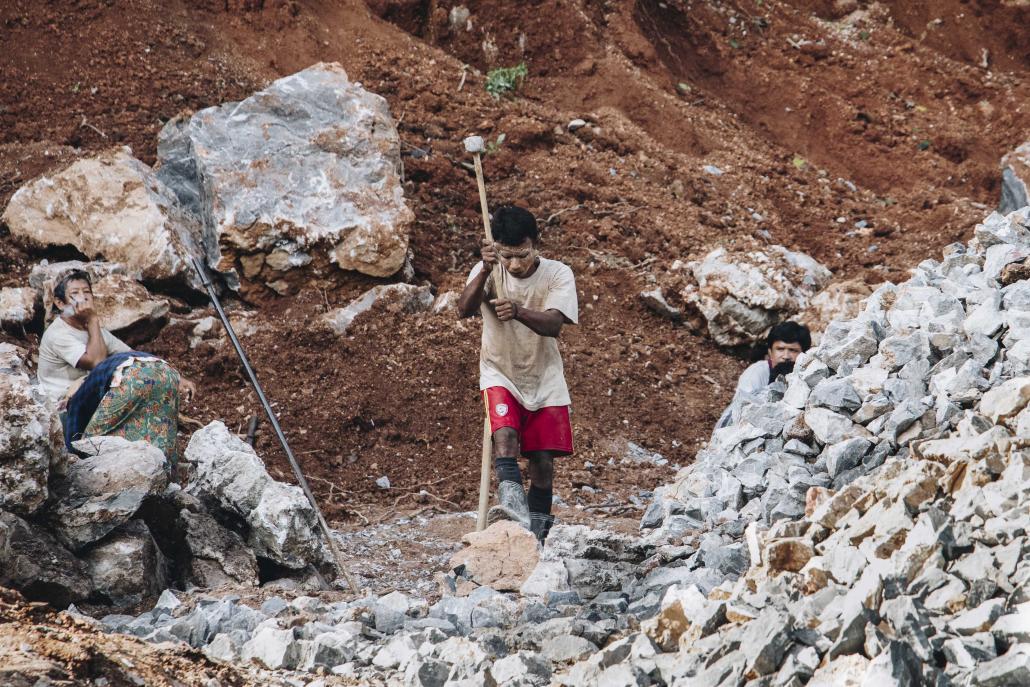 There are more than 20 quarries at the mountain, but most produce just a few tonnes of stone a day. (Nyein Su Wai Kyaw Soe | Frontier)

Resident said Saw Chit Thu told them that the upgrade will require 130,000 tonnes of crushed rock. But villagers say they know little about the quarrying operation because of a lack of transparency.

The Ministry of Construction granted two contracts to CRBC to upgrade the 65-kilometre section of the highway in July 2016. The company won the tenders with significantly lower bids than its competitors and is scheduled to complete the project in September 2019. 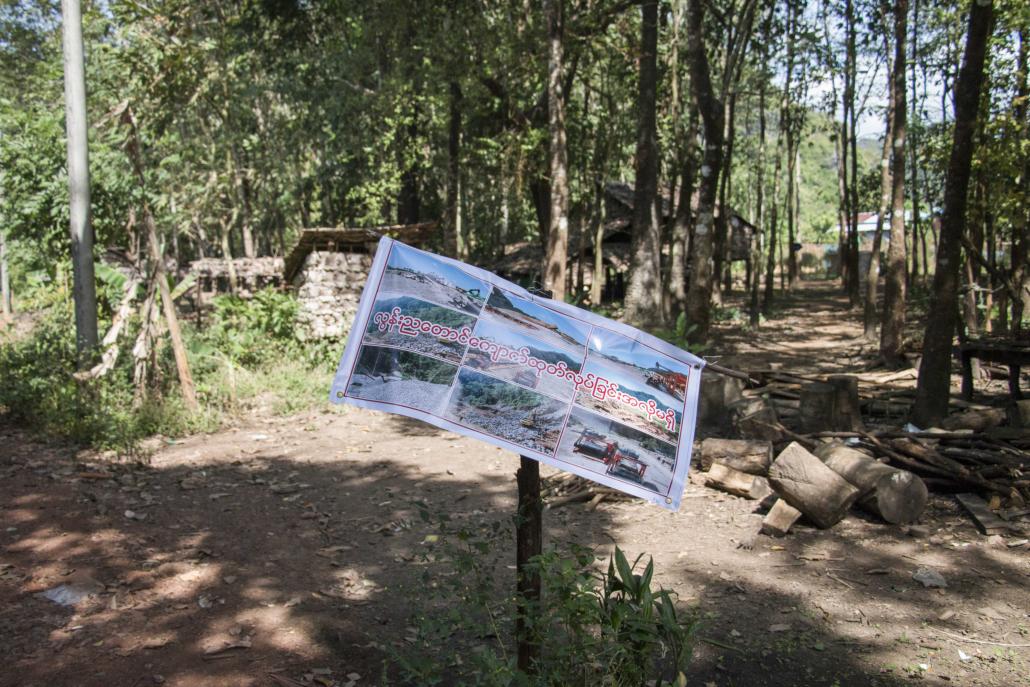 Frontier was unable to verify that CRBC was operating the site. However, this reporter saw Chinese workers travelling to the Lun Nya mountain quarry site on November 23.

Mr Shihiru Date, the ADB officer in charge of the project, told Frontier that the “quarry sites proposed are currently under review and must comply with ADB’s Safeguard Policy Statement”.

It was unclear when the review began or what prompted it. Date did not respond to requests for clarification by deadline.

The Safeguard Policy Statement was introduced in 2009 and sets out environmental, involuntary resettlement and indigenous peoples’ safeguards.

The SPS applies “to all ADB-financed and/or ADB-administered sovereign and non-sovereign projects, and their components”. The ADB says it “will not finance projects that do not comply with its Safeguard Policy Statement”.

‘We will have no drinking water’

Aung Win Shwe, the local administrator, said that residents had opposed earlier projects at Lun Nya, such as a cement plant. However, he claimed that they accepted the BGF project because it was a local company and was producing stone for the new highway, which would help to develop the state.

“We have to accept it even though it is having a bad impact,” Aung Win Shwe said, in an apparent reference to the quarries. “Had the BGF not been involved, we would have opposed the project, but Saw Chit Thu has told us he would take responsibility.” 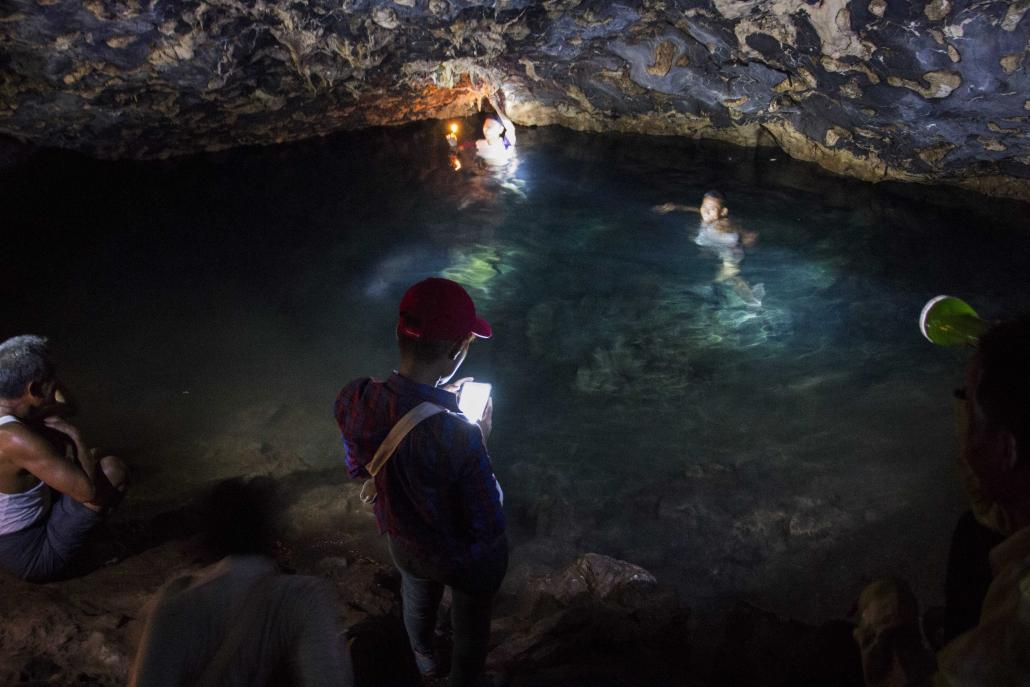 He said Saw Chit Thu has promised to provide K2,000 to the village for each tonne of limestone that’s quarried. A tonne presently costs around K13,000 in Kayin state.

He also said villagers’ fears that the mountain will disappear are misplaced, because the quarry will only operate for three years to support the highway upgrade project.

But Saw Thar Boe, a member of Karen Rivers Watch, an environmental protection group, said the company will produce up to 200 tonnes of crush rock an hour, compared with the smaller quarries on the mountain, which crush just eight tonnes a day.

“So, think about how much rock it will mine,” he said.

He said that most villagers oppose the quarry, while those in favour are mostly connected to the existing small-scale quarries.

Hla Ngwe said villagers were facing difficulties opposing big quarrying operations because they no longer had the support of Aung Win Shwe and the head monk.

The situation was one of the reasons for holding the November 22 news conference, he said.

There are four villages in the Lun Nya Village Tract whose residents rely on the mountain for water supply. They include Kamawpo Village where quarrying has been blamed for damaging two wells.

Villagers living near Lun Nya Mountain, say the pagoda-crowned peak is regarded as an historical site and is also an important water source. 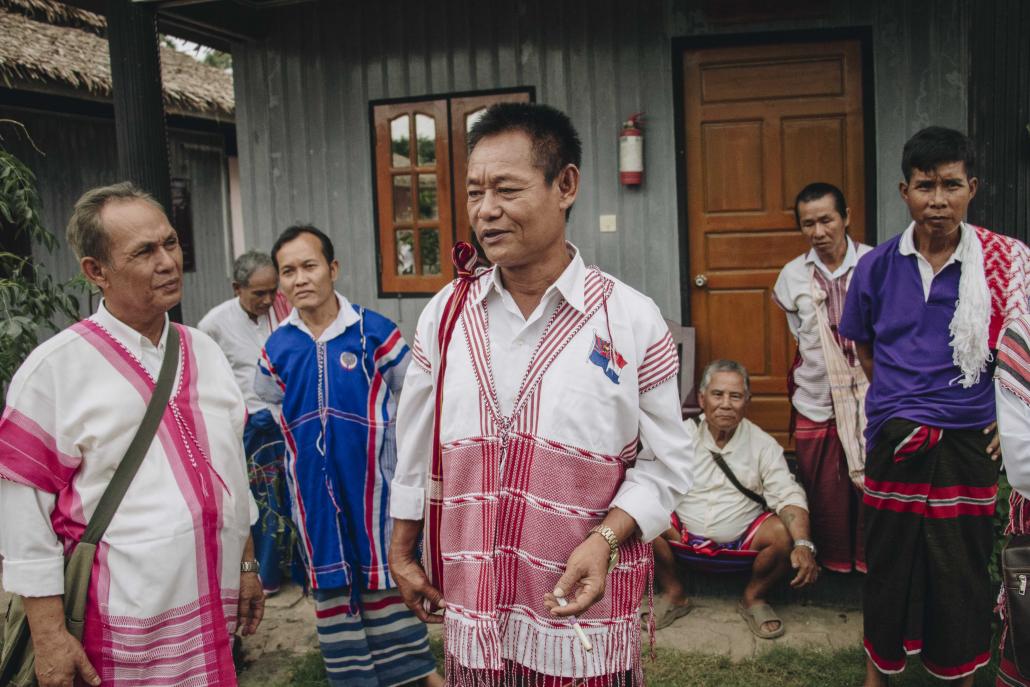 A spring-fed cave deep in the mountain known as the “hidden pond” provides a ready supply of water throughout the hot season. The water is also believed to have special qualities; a revered monk, the late Thamanya Sayadaw, U Vinaya – named after Thamanya Hill near Hpa-an where he established a monastery – is said to have recovered from illness after drinking water from the cave.

Villagers were concerned that the big quarries would lead to shortages of water and firewood and affect their livelihoods, Aung Mya Kyaw told Frontier.

“We will have no drinking water at all if the mountain is completely destroyed,” he said, adding that there were many other mountains in Kayin where rock could be mined.

Hla Ngwe said he was also skeptical about the promise to provide K2,000 for area development for each tonne of rock quarried.

He said the existing quarries had promised to provide K200,000 a year to the village administrator, but the money was always spent on holding bouts of Myanmar traditional boxing known as “lethwei”.

“The administrator never discloses how much he gets from the local mining companies,” Hla Ngwe said.

Lun Nya resident Saw Moe Kyaw, a member of the November 15 group that came under fire, said Kayin’s forests and other natural resources had suffered since armed groups began fighting for business after signing peace agreements with the government in recent years. The armed groups in Kayin include the Karen National Union, which signed a peace agreement with the government in 2012 that ended nearly 70 years of civil conflict, as well as the Democratic Karen Benevolent Army, and the state’s BGF.

Saw Moe Kyaw said he no longer trusted the BGF because of its aggressive business tactics.

“According to my understanding, this is only economic war between them,” he told Frontier, referring to the state’s various armed groups. “I don’t accept any armed groups even through I am Karen.”

POSTSCRIPT: Since this article was first published in the December 21 issue of Frontier, the ADB has announced it will force CRBC to stop sourcing limestone from the quarry until environmental and social safeguards are met.