‘All the fish died’: Kachin communities alarmed at impact of banana plantations

Communities in Kachin State are increasingly alarmed about the environmental impact of chemical runoff from burgeoning banana plantations.

ON THE afternoon of February 6, fish started dying in two streams near a banana plantation in Kachin State’s Waingmaw Township.

Residents of two nearby villages, Aung Myay One and Aung Myay Two, collected and ate the fish, which were taken from the Nam Myin Hka and Nan Lone Hka streams.

On February 15, the Kachin State Environmental Conservation Department tested water in the streams as part of an investigation into the cause of the fish deaths that did not include an inspection of chemical use on the plantation. The assessment concluded that the water was contaminated and suggested that villagers had killed the fish for their own consumption.

Residents of the two villages, about 25 kilometres south of the Kachin capital Myitkyina on the highway to Mandalay, began renting land to a company for growing bananas last year as part of a boom in cultivating the fruit in the state that Frontier investigated in an article published in January, “Kachin’s plantation curse.”

“At first, when all the fish started dying, no one knew what was happening,” said U Ting Ying, a retired watermelon farmer who lives in Aung Myay Two village. “A lot of villagers collected dead fish and ate them.”

Ting Ying has emerged as a spokesperson for his community and by speaking to the media he hopes to put pressure on the company running the banana plantation to investigate the issue. Communicating with the company is difficult because it has no senior representatives in the area, he said.

“They sprayed insecticide on the plants and then there were no fish left. All the fish died. All the villagers felt depressed,” he told Frontier.

“We can’t say for sure whether it’s [because of] the company, but the incident happened around the company area. We asked a company supervisor but he said he didn’t know anything about it.”

U Na Lawn, a watermelon farmer at Aung Myay Two, said, “We want to take legal action against [the culprit]. We don’t want to let it happen again. . . It killed all the fish in the water.”

Ting Ying said about 500 acres (200 hectares) in the two villages had been rented to a “Chinese” company called Jinhgpaw Nadi. Frontier could not verify the ownership of the company, but Ting Ying said the supervisors he had encountered spoke Chinese.

He estimated that the company had so far established banana plantations on about 200 acres. Last year, when the company arrived in the area, a Baptist church leader in one of the villages began encouraging villagers to rent land on which they had previously farmed diverse crops including sesame, corn, watermelon and oranges. Most villagers refused but about one-third of the 80 households agreed, according to Ting Ying.

“One or two villagers had difficulty making a living and so to generate income, they rented their land. More people followed,” he said.

Ting Ying said villagers had signed leases for up to three years, at an annual rate of K200,000 an acre, but a year had passed and they had yet to be paid anything. 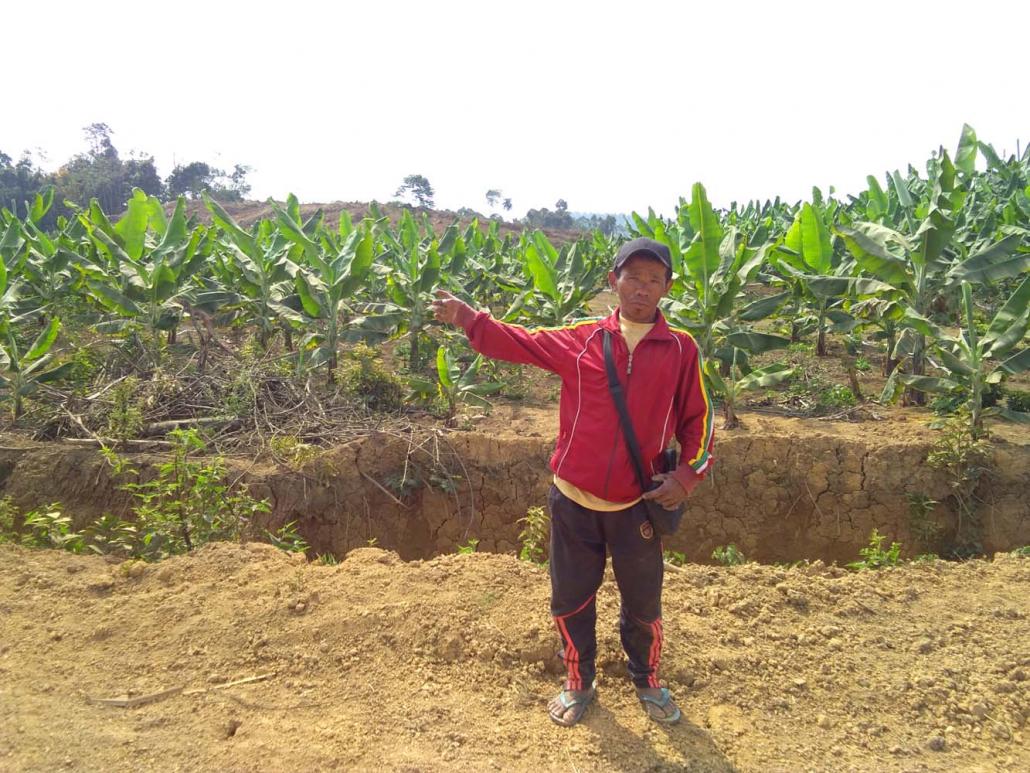 The area around Aung Myay One and Aung Myay Two accounts for a tiny fraction of the banana plantations established in Waingmaw Township, which borders China. The plantations grow what is known as tissue culture bananas, which are propagated in laboratories from the cloned tissue of selected plants to ensure uniformity.

The Myitkyina-based Land Security and Environmental Conservation Networking Group, a coalition of eleven civil society groups, recently released a report on tissue culture banana plantations in Kachin. The report included extensive interviews with the residents of six villages in Waingmaw, Bhamo and Myitkyina townships, as well as satellite mapping of plantation areas in Waingmaw Township.

LSECNG’s report says banana plantations were first established in Kachin in 2006 and in Waingmaw Township have spread to cover more than 142,000 acres, or 12 percent of its area. Of respondents who rented their land, the report found that 59 percent did so because of pressure, threats, deception or duress.

Companies have been accused of employing brokers to pressure people displaced by conflict in Kachin to rent the land they had left behind or risk having it seized by the government and rented out to investors under the 2012 Vacant, Fallow and Virgin Lands Management Law, as reported by Frontier in January.

A comprehensive investigation into the environmental and health hazards associated with tissue culture banana plantations has yet to be undertaken. However, LSECNG has noted concerning incidents in recent years, including cows dying after drinking water downstream from plantations, pigs dying after eating banana flowers and villagers developing respiratory problems seemingly because of prolonged exposure to chemicals.

LSECNG members told Frontier that most villagers in the area around Aung Myay Two rent land to companies for about K100,000 to K200,000 an acre per year, and sometimes for as low as K50,000 or K60,000, with delayed payments being common.

Villagers tempted to work on the plantations would do so for a day-rate of K8,000-12,000 at harvest time, but are undercut by migrant workers from lower Myanmar and Rakhine State who are often willing to work for about K5,000 a day. Meanwhile, a company could earn K8 million an acre per harvest, which can be reaped twice in a year, an LSECNG source said.

The banana plantations have become increasingly contentious in Kachin and speaking out publicly about them can be dangerous. LSECNG personnel interviewed by Frontier were not willing to be identified because the government had disputed their findings.

On February 26, two reporters from the Myitkyina News Journal were allegedly detained and physically abused by staff of Tha Khin Sit Mining Company over an article published the previous day in which villagers expressed concern over the company’s alleged plans to clear land for banana plantations.

The day after the incident, the reporters sued six of the company’s employees for assault, wrongful restraint and other offences under the Penal Code. On March 13, the managing director of Tha Khin Sit Mining Company, Ding Sau,  sued Myitkyina News Journal executive directors Brang Mai and Zau Khun and journalist Moon Moon Pan for defamation under the Penal Code.

Much of the banana plantation industry in Kachin is opaque. Most companies are widely believed to be either Chinese-run or joint ventures between Myanmar and Chinese investors, but government records give little or no information about the companies or their output. Many operate in areas controlled by non-state armed groups, where government approval can be bypassed along with legally mandated environmental impact assessments.

The company was registered in 2016 as a nationally-owned company named Kachin Star. With the entry of Chinese investors, the company registered as a foreign joint venture, Kachin Tian Hu Company Limited, in August 2018.

Though Ting Ying said the company running plantations near the two Aung Myay villages is called Jinghpaw Nadi, the only business with that name registered with DICA is a travel and tour company with no discernable link to banana plantations. 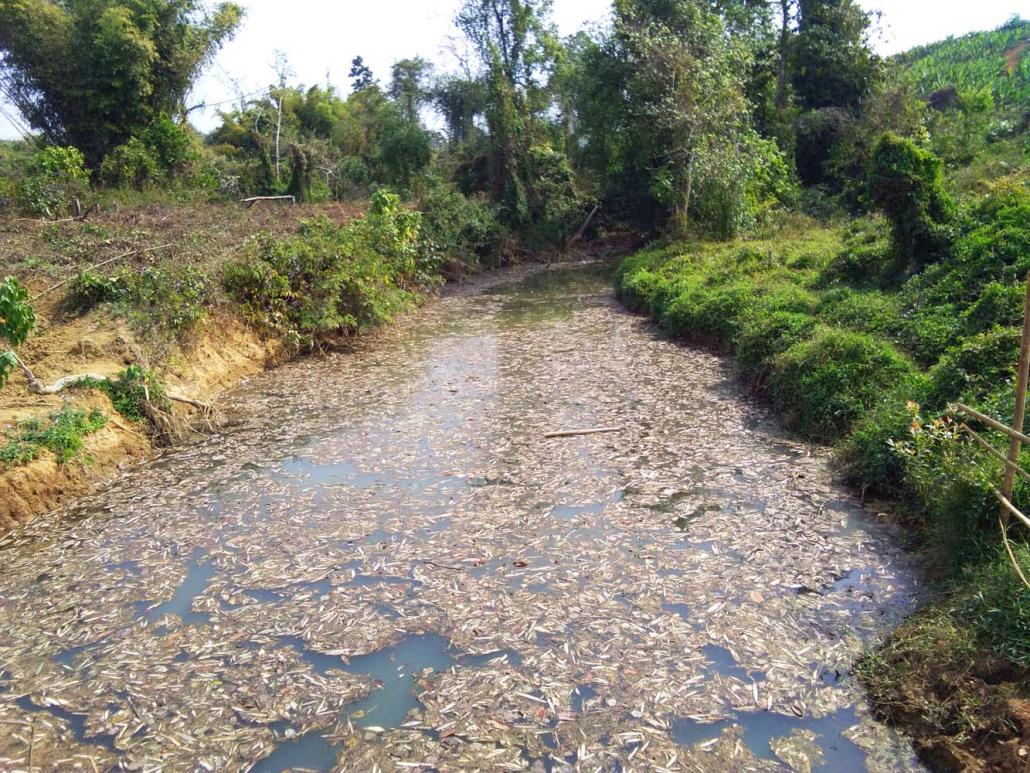 Gaps in the record

In a March 1 interview at the Myitkyina office of the Environmental Conservation Department, the assistant director for Kachin State Daw Nwe Nwe Aye willingly shared the contents of the department’s report on the fish deaths with Frontier, saying, “Transparency is of the utmost importance”. Asked about the plantation operator, Nwe Nwe Aye said she did not know the name of the company but assumed it was Chinese-owned like others in the industry.

As well as information about the company and its operations, the chemicals used on its plantation next to the Nam Myin Hka stream were also missing from the report.

The ECD says in its report that it sent four staff to investigate the fish deaths. They took water samples upstream and downstream from where the fish died and interviewed villagers. The water was tested according to thirteen criteria, including temperature, pH, oxidation reduction potential and total dissolved solids, and was found to be within safe ranges in all criteria except for water turbidity, which is a measure of particle suspension.

The ECD investigators found the remains of a campfire and some beer cans near the stream. The fish had been removed or had decomposed by this time but, citing the villagers, the report said that all the dead fish were found downstream from the campfire site.

The report also said that fish had died in the same stream in 2013 and an investigation at the time had found that villagers had used herbicides and explosives to kill them to eat. Based on this circumstantial evidence, the report concluded that while it was not possible to determine who or what caused the fish deaths, villagers were the most likely suspects.

“It is their habit” to kill fish, Nwe Nwe Aye said, adding that while blame could not be established, “the assessment found that the villagers often kill and catch the fish, so it is the most likely possibility”.

Nwe Nwe Aye said some villagers interviewed for the ECD investigation claimed the fish could not have been killed by chemical runoff from the plantations because it was not the spraying season. However, this appears to contradict Ting Ying’s statement to Frontier and a February 26 report by the Kachin News Group, which quoted villagers as saying they believed “the fish were killed by pesticide runoff … [from a] China-backed tissue culture banana plantation two miles away”.

Although the plantation was excluded from the ECD’s investigation, the report recommended monitoring and regulating the use of chemicals on banana plantations and raising awareness among communities about the risks and dangers of chemical use.

Asked if the ECD planned to inspect the plantation near the Nam Myin Hka stream, Nwe Nwe Aye said it first needed a formal request from DICA or another government office. She said the ECD had so far received only one such request for a banana plantation, involving Kachin Star/Kachin Tian Hu, the company mentioned by DICA.

LSECNG, meanwhile, is advocating that the government be more proactive on environmental regulation and in responding to chemical contamination.

“We don’t want to kill the banana plantations,” said an LSECNG member, who requested anonymity. “We want to find a way for the local people to share in the profits […] and promote sustainable, ecological farming.”