Government efforts to make workers returning from Thailand comply with an order to home quarantine have proven farcical, with potentially grave consequences for the spread of the coronavirus.

“THEY don’t want to do a 14-day quarantine; they would prefer to be jailed for six months,” said a disappointed U Tayzar Aung, the administrator of Myawaddy District in Kayin State.

He was speaking to Frontier on March 24 about the deluge of migrant workers returning from Thailand at Myawaddy, many of whom appeared to be risking a six-month prison sentence by violating a quarantine order issued to contain the coronavirus.

Over the past week, officials at the border have struggled to enforce quarantine rules on returning migrants, some of whom have broken through fences to evade orders to self-isolate at home.

Only five people in Myanmar have so far tested positive to COVID-19 – a fraction of the more than half a million global cases – but that number could increase if any of the migrants returning from Thailand are infected but not detected and isolated.

Tens of thousands of migrant workers crossing the border are being asked to self-quarantine at home. This includes the several thousand who have returned since March 25, when an order from Nay Pyi Taw that all returning nationals must be sent to quarantine at a state facility nominally went into effect. Health officials say they lack the manpower to enforce home quarantine, and reports of non-compliance are multiplying, prompting some local authorities to enact tougher measures.

Frontier witnessed chaotic scenes at Yangon’s Aung Mingalar highway bus station, in which migrants returning from the Thai border arrived huddled with other passengers and caught taxis amid a shortage of vehicles provided by the government. Several buses arrived at Aung Mingalar completely empty, the migrants having fled the vehicles on prior stops.

As criticism grows over its handling of the returning migrants, the government has reportedly turned to the World Health Organization for assistance to manage the issue.

While attention has focused mostly on migrants returning through official channels, the movements of illegal workers are even murkier. At least 2.2 million Myanmar migrants work legally in Thailand, RFA reported recently, but perhaps another million more are undocumented.

“Undocumented workers are still going back, they’re just crossing the border illegally using brokers,” said Ko S Lin Aung, who has worked in Bangkok for the past 13 years as a migrant labour broker.

He said that on March 25 the Thai military detained a group of 81 Myanmar migrant workers trying to cross the border, of whom 68 were undocumented. But many more illegal workers have likely made it back and evaded the government’s quarantine measures.

“The situation is not good,” S Lin Aung said. “Even if they close the border, many migrants will definitely return to Myanmar with the help of brokers.”

The border closes… sort of

Myanmar migrant workers began returning home across the Thaung Yin River that divides Thailand’s Mae Sot with Myawaddy earlier this month, amid the closure of factories and other workplaces in Thailand.

This was despite Myanmar reportedly asking the Thai government to pass on the message that workers should not return home for the traditional new year festival of Thingyan, which takes place in mid-April.

Mr Suchart Pornchaiwisetkul, the director-general of Thailand’s Employment Department, said on March 17 that Myanmar had asked Thai authorities to inform migrant workers that Thingyan celebrations had been suspended this year, the Bangkok Post reported.

The Myanmar advisory warned that workers who returned home for Thingyan would have to follow disease control instructions when they return to work in Thailand and it would include quarantine, the daily said. They would also have to pay THB1,000 (K42,200) for a re-entry visa, which is usually waived for documented migrant workers.

Returns began to accelerate from the middle of the month, and more than 30,000 came back through formal channels at Myawaddy between March 16 and 22.

On the morning of March 23, Thailand closed its borders as one of several stringent measures to halt the spread of the virus in the country, which had 599 confirmed cases on that date (it had recorded more than 1,000 at press time).

Although the border with Myanmar remains officially closed, Thailand has still allowed thousands of migrants to formally return to Myanmar across the Number 2 Thai-Myanmar Friendship Bridge. About 2,000 have been returning each day, officials in Myawaddy told Frontier.

Up until March 23, Myanmar had been requiring returning migrant workers from Thailand and Malaysia to self-quarantine at home because it lacked the facilities to quarantine them.

The government prepared five buildings in Myawaddy in which to quarantine returning migrant workers. For those crossing back to Myanmar on March 24, quarantine in these facilities was still voluntary, and only one person consented to it.

That same day, frustrated workers managed to force their way out of a holding area and past Myanmar government officials who were trying to conduct health checks and collect personal details, resulting in a confrontation with police.

“They forcibly broke through the fences of the processing area,” said Tayzar Aung, the district administrator. “They do not stay where they are put; instead of sitting down in an orderly manner, they are trying to get home any way they can.”

Police were brought in to restore order and managed to do so after a tense confrontation with workers, Ko Ye Min from the Aid Alliance Committee, an organisation that helps migrant workers, told Frontier. He said that the sudden influx of migrant workers that week had caught the authorities by surprise.

Officials at Myawaddy also appear to be ignoring the mandatory facility quarantine order for new arrivals starting on March 25.

When Frontier checked with the authorities that day, just one of about 2,000 workers who returned on March 25 had been admitted to the five centres in Myawaddy. On subsequent days, thousands of migrants were allowed to enter Myanmar without having to go to a quarantine facility.

Asked why officials were not implementing the order from the Ministry of Foreign Affairs, Tayzar Aung said that “it is the responsibility of the respective state and region government to ensure they are quarantined”. 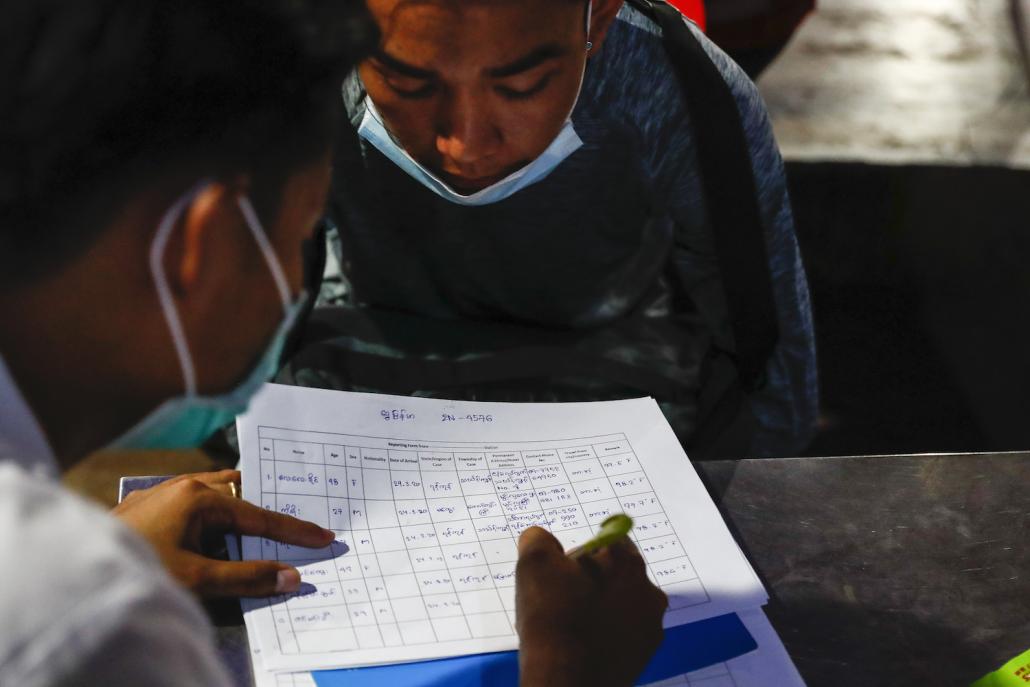 Statements released by the Ministry of Health and Sports claimed that, up until March 24, no cases of COVID-19 have been detected among returning migrant workers.

However, tests for the virus in Myanmar are only being carried out on people who display obvious symptoms of COVID-19, such as a fever or a dry cough, and these can take up to two weeks to appear in those who become infected.

This is why the two-week quarantine period is important. But the big challenge confronting the government’s plan to control COVID-19 at the border is whether the tens of thousands of returning migrant workers will submit to home quarantine and follow official instructions.

The 1995 Prevention and Control of Communicable Diseases Law, last amended in 2011, provides for the six-month jail sentences for refusing an order to be quarantined. But although the law gives township health officers special powers in emergency situations, they lack resources to uniformly enforce quarantine orders.

Kayin State Minister of Social Affairs U Bo Bo Wai Maung said the addresses and telephone numbers of the returning migrant workers were recorded and the government provided transport to their hometowns.

As well as requiring returning migrant workers to undergo home quarantine, they are also required by the Ministry of Health and Sports to make daily contact with their township health departments.

Officials in states and regions with large numbers of citizens working in foreign countries told Frontier that they were struggling to enforce home quarantine rules and other measures to combat COVID-19, due to the large number of migrants returning and the government’s lack of resources.

This was evident in Yangon late on March 24 when express buses carrying about 400 migrant workers and other passengers arrived from Myawaddy at about 10pm.

On arrival at Aung Mingalar bus station on the city’s outskirts, the migrant workers were met by the Yangon City Development Committee officials, and police and Myanmar Red Cross personnel.

A Frontier photojournalist who witnessed the arrival of the buses said the migrant workers had been seated among other passengers, apparently ignoring instructions from the authorities not to mix with others.

Arguments erupted between the police and employees of the Mi Ba Gon Yi bus company when it was learned that three of its buses, which had left Myawaddy carrying mainly migrant workers, had had made stops during the journey to allow passengers to disembark. By the time the three buses arrived at Aung Mingalar, they were not carrying any passengers.

The reluctance of returning migrant workers to accept home quarantine elsewhere in Myanmar has resulted in the Ayeyarwady Region government deciding at an urgent meeting on March 24 to require them to undergo quarantine in a state facility where they would be monitored by health ministry officials, said Dr Than Min Htut, the head of Pathein General Hospital in the regional capital.

“According to what people are saying, the migrant workers are not following the government’s instructions [on home quarantine]. They are going around and meeting people,” Than Min Htut told Frontier.

He said the quarantine plan would take effect on March 25 and the police would trace the migrant workers to ensure they complied.

“We will detain these people even if we have to use 1,000 policemen,” said Police Colonel Tun Shwe from the Ayeyarwady Region police force.

In Yangon, student Nang Nan San, who lives in North Okkalapa Township, said a returnee from Thailand had been living near her home since March 22 and did not seem to be self-quarantining.

“The whole ward is worried,” she told Frontier. “We feel unprotected.”

On March 27, the Yangon Region General Administration Department ordered all township-level GAD offices to restrict the movement of people who have recently returned from abroad. The order said that GAD officials should charge any returnees who fail to follow government instructions on home quarantine under the 1995 law.

But lawyer U Kyaw San Aung, who has worked closely with migrant workers in the past, said the government had failed to properly prepare for the return of the migrant workers.

He said the government decision to order home quarantine was useless because most Myanmar live with their families and do not have their own room.

“These migrants won’t even understand what home quarantine is,” Kyaw San Aung said.