Ahead of by-elections, UEC changes its tune

In a change from the past, the Union Election Commission appointed following the government transition nearly a year ago is winning praise from some political parties as they prepare for by-elections on April 1.

“People try to gain power and create a beautiful country …  election will be held … election, election, by-election … we will surely go to the polling station … to elect our candidate.”

Union Election Commission member U Hla Tint was humming the tune to this song, which encourages voters to participate in the by-elections on April 1, when Frontier called him on February 18 for an interview.

He should know the tune well – after all, he composed the song. It has been broadcast on Myanma Radio and Television since the third week of February as part of the UEC’s campaign to encourage a high turnout in the by-elections, which will fill 19 vacancies in the Union and state and regional parliaments.

“The voters don’t seem to be very interested in the by-elections and the song is part of a campaign to encourage them to participate,” Hla Tint said.

“We have been working with civil society to promote participation in the by-election since the end of last year,” he said. 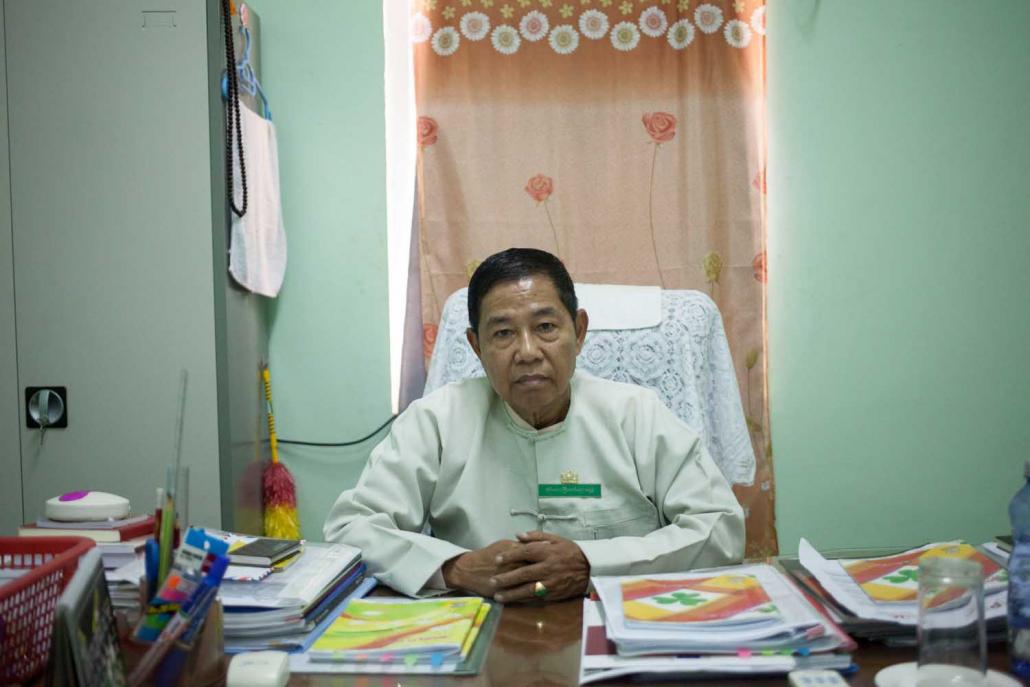 He said that the commission had improved the efficacy of its activities, in part by working to adopt recommendations from the 2015 general election. But the voter lists remain a point of contention. “Most civil society are still accusing the commission over [the voter lists],” he said.

Hla Tint said another challenge for the UEC was ensuring that voters checked their names on electoral rolls ahead of any vote.

He said the commission was striving to ensure a free and fair vote but lack of interest in the by-elections meant few people had checked voter lists, which were displayed publicly from February 1 to 14.

“I think it might be because so many voters trust the UEC’s door-to-door checks that they don’t bother to see if they are correctly enrolled,” Hla Tint said.

He said that only 6.7 percent of the 1.72 million eligible voters in constituencies where by-elections will be held had checked they were correctly enrolled.

Hla Tint said the by-election would be a useful experience for UEC members and help them prepare for the next general election due in 2020.

The five-member UEC, chaired by U Hla Thein and comprising former senior public servants, was appointed by President U Htin Kyaw on March 30 last year, the day the National League for Democracy government took office.

It replaced a 15-member UEC – chaired by former lieutenant-general U Tin Aye. A former chairman of Tatmadaw-owned conglomerate, Union of Myanmar Economic Holdings Ltd, who won a seat in the 2010 election for the USDP, Tin Aye gave up his seat in parliament when he was appointed UEC chair by President U Thein Sein on March 30, 2011.

After the much-criticised 2010 general election – in which the USDP was assisted to victory by large numbers of advance votes – the UEC under Tin Aye was praised for the conduct of the by-elections on April 1, 2012, which paved the way for the long-awaited parliamentary debut of the NLD and its leader, Daw Aung San Suu Kyi.

It was a stunning result for the NLD, which won 43 of the 44 seats it contested in by-elections in 45 constituencies.

The former UEC also presided over a generally free and fair general election in November 2015, in which 69 percent of 34.29 million voters participated. The NLD won about 80 percent of the elected Union Hluttaw seats in 2015, about the same margin of victory that the USDP achieved in the rigged 2010 election that was boycotted by the NLD.

The April 1 by-elections are for nine seats in the Pyithu Hluttaw, three in the Amyotha Hluttaw and seven in state and regional assemblies.  The ballot is taking place in 22 townships in a total of eight states and regions – Yangon, Bago and Sagaing regions and Chin, Kayah, Mon, Rakhine and Shan states.

A total of 95 candidates are standing, including 88 representatives of 24 political parties, with the rest being independents. Campaigning began on January 30 and ends on March 30.

About 15 civil society groups have been helping the UEC to prepare for the poll, assisting with such activities as collecting and checking voters’ lists and training polling station supervisors as well as promoting a high turnout.

The UEC conducted door-to-door visits in the 19 constituencies between November 1 and 30 to update lists of voters that were prepared for the 2015 election.

“I was with an officer in Kamaryut [Township] and they were ringing the bells in front of the apartment buildings, and then telling the residents that they wanted to confirm the voter list. But at some places there was nobody at home – that means they might miss out on being enrolled,” he said.

Ye Kyaw Swar Myint, who welcomed the readiness of the current UEC to work with civil society groups, said door-to-door checks were not the answer to creating a credible voter list for the next general election. “More human resources are needed and the UEC needs to find an easier way to compile voter lists for a general election,” he said. 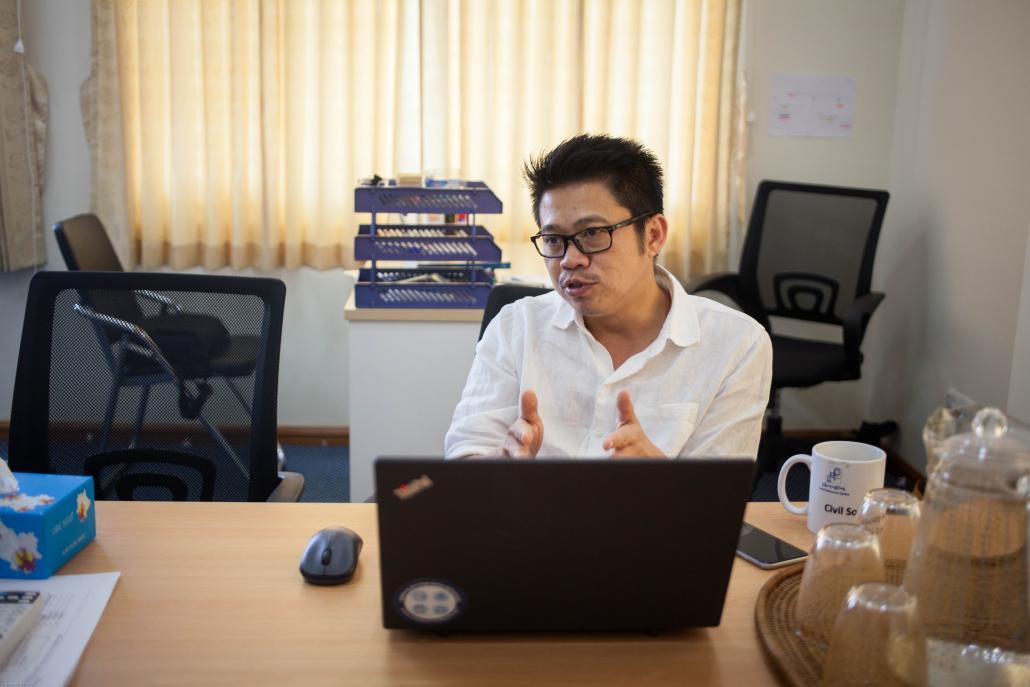 He said research conducted by PACE for the by-election found that only 55 percent of respondents had been visited during the door-to-door update. Urban households (62 percent) were more likely to receive a visit than rural households (45 percent), according to the survey.

It also found that 38 percent of people – almost two out of five respondents – were not even aware the by-elections were happening.

PACE has about 200 people registered as observers with the UEC who will monitor the by-election campaign and the vote on election day.

The process of registering as observers has been made easier. In 2015, each individual election observer had to sign a code of conduct with the UEC, but for the by-elections it is signing agreements only with election monitoring organisations like PACE.

Among the most-watched of the by-elections will be the contests in Shan State’s Kyethi, Hmong Hsu and Kengtung townships, for two Pyithu Hluttaw seats and five vacancies in the state assembly.

Each of the constituencies is being contested by the NLD, USDP and Shan Nationalities League for Democracy.

There is also a by-election for the Shan assembly in Nyaungshwe constituency 1. The only other by-election for a state or regional hluttaw vacancy is taking place in Kayah State’s Hpruso-1 constituency. It is the only by-election vacancy not to be contested by the NLD, due to the candidate failing to register on time.

U Ye Aung, chairman of the Kanbawza Youth Library, a Taunggyi-based civil society group established in 2002, said there was little interest in the by-elections among rural voters in the Shan constituencies because they were too busy making a living. In the 2015 election, turnout was 65 percent, slightly below the national average.

Ye Aung said there were many problems with the voter lists in Shan State, with some eligible voters missing and others who are not eligible – for example, those who have moved to other townships – remaining on the list.

“We have been trying to promote participation by sending a vehicle with a loudspeaker to spread information about the by-election to each constituency in Shan State every day, but there are limits on what we can do because we cannot reach remote mountain areas,” Ye Aung told Frontier.

Sai Nyunt Lwin, secretary of the SNLD, said party members involved in preparing for the by-elections had praised the cooperative attitude of UEC staff.

Referring to the perceived bias towards the USDP of previous election commissions, Nyunt Lwin said: “The new UEC will stand in the middle and I think the NLD will not pressure them; they will conduct a free and fair election.”